Well, no one said the road to $1 million bitcoin would occur in a straight line.

Bitcoin briefly dipped below $12,000 this morning. As we check our screens it’s recovered to $12,849. Alas, buying and selling on Coinbase is temporarily suspended, the volume is so overwhelming. [Update: “Buys and sells have been re-enabled,” says Coinbase’s status page. “We are monitoring for stability.”]

To the extent it’s possible to step back and take a breath, we offer up the following reminders…

James Altucher still recommends buying dips in bitcoin. If his outlook of $1 million by year-end 2020 comes to fruition, no one will remember today. (And there will surely be more days like today between now and then.)

Meanwhile, the major U.S. stock indexes are all in the red — though not by much.

“It’s been 71 days since the S&P 500 has registered a 1% move in either direction,” says Alan Knuckman, our man in the Chicago trading pits. “But S&P 500 short interest has tanked, and hedge fund leverage is near its highest level since 2007. In short: The bears have all gone home. The bulls are soundly in charge.”

What’s more, Alan points out the S&P is only 12% away from the 3,000 milestone. “With earnings growth, it won’t be long before the S&P trades through that level. In fact, many analysts haven’t even factored tax cuts into their estimates.”

[Ed. note: Since launch less than three months ago, Alan’s 42-Day Retirement Plan has closed 11 trades. The record? Eleven winners, no losers. The average gain? 63.8%. All of that since October.

And with January earnings season just around the corner, Alan anticipates many more opportunities just like these. See for yourself right here. No long video to watch.]

Gold popped to nearly a three-week high after the release of the latest inflation numbers.

“Core PCE” is a figure put out by the Commerce Department; it’s the Federal Reserve’s preferred measure of inflation. When the Fed talks about its 2% inflation target, this is the number it’s talking about.

After tumbling further and further from that 2% target most of this year, the number’s been rising steadily for three months. It’s now 1.5%. Inflation has turned the corner. 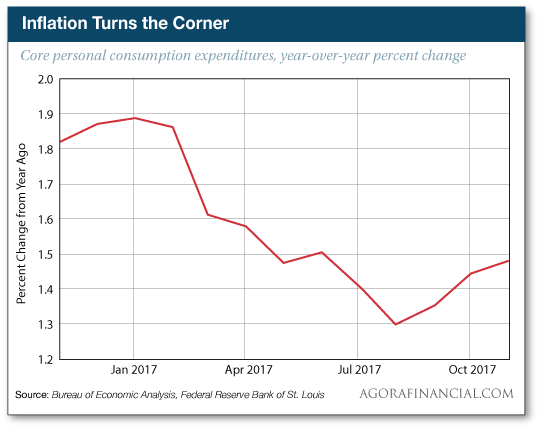 And there were other economic numbers of note today…

For the record: The president signed the aforementioned tax bill into law late this morning.

He also signed another kick-the-can bill that forestalls a “partial government shutdown.” This is the third such bill he’s signed in the last three months; this one will keep the doors open till Friday, Jan. 19.

“Now that the tax bill has been passed, I expect the benefits to start rolling in,” says our income specialist Zach Scheidt.

“Of the six stocks that we picked to benefit from a new Republican tax package, five have traded substantially higher,” he says. Anticipation of tax reform has done much to drive up these stocks this year. Now that it’s a done deal, “I expect to see some very large dividends announced over the next few weeks.

“That’s because big companies with international profits will now be able to bring overseas cash back home and give that cash back to investors through dividend payments.”

All that corporate cash “stranded” overseas? “According to the bill,” Zach explains, “there is a mandatory 15.5% tax on this $2.6 trillion in overseas cash. U.S. companies are required to pay that tax whether they bring the money back to the U.S. or not.”

True, the share prices of these companies have already jumped on hopes the plan will pass. But there’s still ample opportunity to collect higher dividends — maybe even special dividends — come the new year. And with the boost this cash will give to earnings, there’s still more to capture in the way of capital gains as well. If you haven’t checked out “Cash for Patriots” yet, best give it a look before the law takes effect Jan. 1.

“Peter Bernard’s Yuletide plans include dressing up in a tuxedo emblazoned with marijuana leaves, donning a green Santa hat and doling out cookie bars made with marijuana to his friends from a big pillowcase,” says an Associated Press article

Mr. Bernard’s a resident of Massachusetts, one of four states that voted to legalize recreational marijuana in 2016. He’s also the organizer of the Massachusetts Growers Advocacy Council… and one of many who’ll stuff legal weed in Christmas stockings this year.

“Because retail sales are operating in only one of those states — Nevada — Bernard and others excited about legalized pot said homegrown marijuana is one particularly popular gift.” (Homemade?…How thoughtful!)

“I figure I’ve got all this pot, I might as well just give it away for Christmas,” said James MacWilliams, of Portland, Maine, who started growing weed when it became legal and is giving away jars of his crop this year. “I told my friends, you’re all getting a little bit of pot for Christmas.”

Shoppers frequent pot retailers in search of the perfect Christmas gift, too. “Statistics about legal sales of marijuana suggest a modest bump around the holidays,” says the article. “In the four states where it was already legal, Alaska, Colorado, Oregon and Washington, it has been ‘generally a good month.’”

Just don’t take purchases across state lines: On Tuesday, an octogenarian couple was busted with 60 pounds of pot during a routine traffic stop in Nebraska. The reason for the haul? The couple was planning on giving the pot as Christmas gifts.

“People consume cannabis on the holidays and they always have,” says Aaron Smith of the National Cannabis Industry Association. “Now they are doing so through a regulated system.”

So cheers to cannagifting this Christmas! Oh, cannabis… oh, cannabis…

“Just to be clear,” begins today’s mailbag, where tax reform is still on readers’ minds…

“I’m no expert in this subject, but are you saying that essentially it would be better if we didn’t get a tax cut bill at all? That it will basically do more harm than good in the long run? Please clarify if you can. Thanks!”

“The only good tax is a dead tax,” writes another reader, doing the clarifying for us.

“Let’s talk more about repealing the federal income tax than tinkering and trimming.”

The 5: This. And while we can’t speak for that second reader, we don’t mean replacing it with a national sales tax or, as its advocates brand it, a “fair tax.”

“Tinkering and trimming” is a good way to describe it. While the Tax Policy Center finds that 80% of taxpayers will see a tax cut next year, it will amount to $380 or less for more than half of those people. Will anyone even notice? (Few noticed when Obama temporarily slashed the payroll tax for a couple of years, and a lot more people pay payroll taxes than income taxes.)

And then there are the folks whose tax liability will rise — to wit, this fellow: “Already ran the numbers for 2018.

“With an AGI around $160,000, married filing jointly, I will pay more in taxes even at the lower rate. My itemized deductions have been in the range of $33,000 annually, so $24,000 won’t cut it in a high-tax state like California. My allowed itemized under the new plan are below the $24,000 standard deduction.

“Thank you, Donald… I’d rather say something else… but civility won’t let me write that here.

“One reader’s comments described the tax bill and then said, ‘The really sickening part is future generations will pay for this.’ That’s his opinion.

“I believe the really sickening part is future voters will continue to elect Republicans and Democrats. In other words they will vote for more of the same BS — beginning in November 2018.”

“Business as usual in Washington,” affirms our final correspondent.

“Not only do we have fiscal insanity, but now a gambler of a president (I’m Republican).

“Oh, well, if Trump is re-elected, at least the right guy will be in office when the U.S. government goes broke.

“Trump will do the biggest ‘work-out’ deal of his life, presiding over the bankruptcy of the U.S. government, the rescheduling and default on U.S. government debt.

“As I’ve heard it said: Many, many people have taken a haircut when dealing with Donald Trump. This time the American people.

“It will have taken the fractional reserve system 110 years to destroy the U.S. dollar.

“Remarkably, the British pound sterling retained the same peg against gold for something like 230 years (1705ish–1930s).”

Somehow, we suspect the transition won’t be as peaceful next time…

P.S. We’re back tomorrow with our Saturday wrap-up/countdown edition, 5 Things You Need to Know… and then we’re going on a short holiday break.

Agora Financial’s offices will be closed Monday for Christmas Day and Tuesday for the day after. The weekday edition of The 5 returns on Wednesday. Merry Christmas!