Our resident “crypto millionaire” James Altucher has a year-end confession: He doesn’t always buy the dip with bitcoin.

Yes, that’s what he’s been encouraging his readers to do for months. He certainly hopes that’s what they did a week ago today, when bitcoin tumbled 20%.

“I can’t count the number of times in this market (and others) when I promised myself I would buy the dip and when it inevitably came, my brain invented a million rationalizations why the price would still go lower or this was not the time to buy,” he says.

“It’s like shipping off to war and saying, ‘I’ll be brave when I’m staring down the barrel of a gun,’ but when that moment comes, you realize how foolish you once were and then you p*** yourself and curl up into a ball and cry for your mother.”

“The good news is this: Humans are learning creatures,” James goes on. “We observe our experiences, draw conclusions based on observation and adapt our behavior.

“Which is to say: If you missed the latest dip, you’re in luck. It won’t be long before another opportunity presents itself and you’ll have a chance at your shot.”

Meanwhile, as mentioned briefly yesterday, James has spotted the “next big thing” in crypto. His years of experience — including a single trade that netted nearly $1.8 million — have led him to discover a 24-cent cryptocurrency that’s coming on strong. Follow this link and he’ll tell you all about it.

It’s a quiet last day of the year in the more conventional markets. 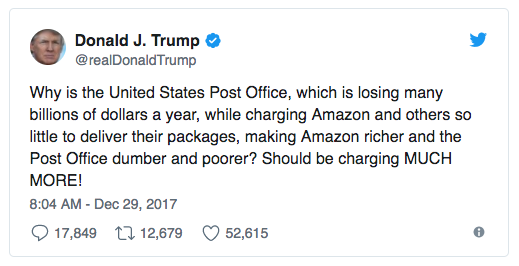 Interesting assumption there — that Amazon would not pass along those higher costs to its customers.

On the one hand, we’re tempted to say the president just betrayed some basic economic ignorance. On the other hand, Amazon has a history of choosing to eat higher costs so it can achieve market dominance… and EZ money from the Federal Reserve keeps propping up Amazon’s share price. Strange times these are…

What a final week of the year for marijuana stocks. 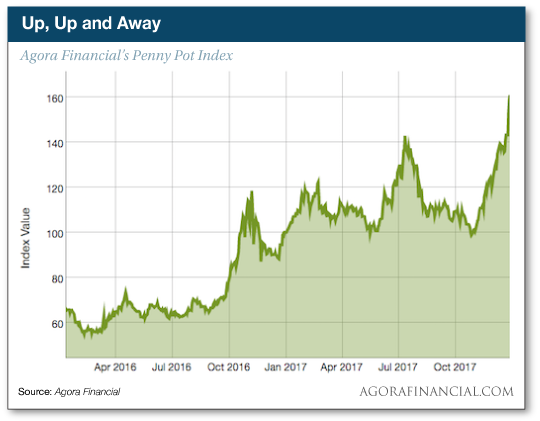 That equals the index’s all time high: The data compiled by Ray Blanco and his team go back to mid-2014… which happens to mark the previous all-time high. It’s taken 3½ years to get back to that initial peak. (It was in June 2016 that Ray convinced us as a company to overcome our longstanding skepticism about recommending pot stocks. Judging by the chart, his timing was spot-on.)

“I expect that 2018 will be a very exciting — and lucrative — year for penny pot investors,” Ray says now.

“On the legislative front, we’ve seen pot either become legalized or frameworks in place to make pot legal in the months ahead in scores of new locales. Here in the U.S., 29 states and Washington, D.C., now have some level of legalized marijuana, whether it’s medical only or fully recreational. And Canada, a medical marijuana early adopter, plans on having recreational weed fully legal next summer.”

Don’t forget: With the arrival of the new year on Monday, recreational marijuana becomes legal in California — home to one out of every eight Americans. The newspaper in the state capital is doing its part to satisfy reader curiosity — and stoke demand, no doubt… 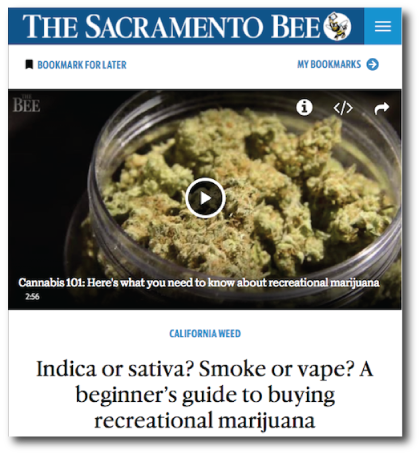 “Analysts are estimating that it’ll be a $7 billion business,” says Ray — one that throws off $1 billion a year in taxes.

“It’s going to be an interesting shift. By most accounts, the state isn’t really ready for the transition to legal weed. Expect crises — and opportunities.”

Ray believes the most lucrative opportunity lies within a ghost town — a place that time forgot after the great California Gold Rush. Click here to see just how big an opportunity he’s talking about. (For maximum profit potential, you’ll want to check it out before legalization day on Monday.)

A cannabis addendum: Don’t try to take your legal weed through the “border checkpoints” that aren’t really at the border.

More than five years ago we told you about the “Constitution-Free Zone” in which two out of three Americans live. As far as the federal government is concerned, the “border” extends 100 miles inland.

Anywhere within that zone, Customs and Border Protection agents can stop your car on the pretext that they’re looking for illegal immigrants. But most of the time, that’s not what they’re looking for at all. “The checkpoints are really about trying to stop drug smuggling, and the government fully acknowledges this,” writes Scott Shackford at Reason.

And as far as the feds are concerned, nothing changes after Monday. The Border Patrol tells the Associated Press that agents at these internal checkpoints will continue to seize any marijuana they find. That said, drivers and passengers probably won’t be subject to arrest; the feds have little interest in going after people for simple possession.

The AP reports that to date, 40% of the seizures at these checkpoints are for amounts less than an ounce. “I’m guessing we see that percentage climb in the new year,” Shackford writes.

As long as we’re talking about travel and an overbearing federal government… we have an update on the threat that you’ll need a passport to take a domestic flight.

In short, the deadline’s been pushed back again. But exactly how long depends on where you live. 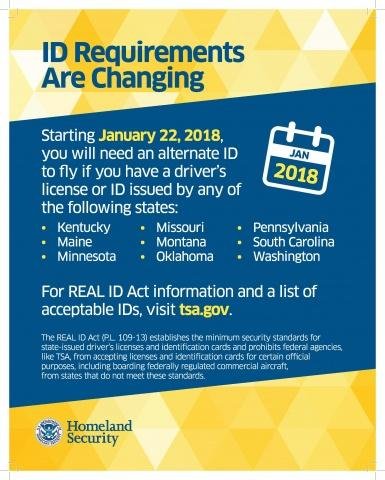 Yesterday, the TSA confirmed the deadline’s been postponed to October 2018.

Now here’s where it gets a little confusing. If you come from a state that’s begun complying with Real ID’s requirements, but you have an old driver’s license that’s not compliant… you’re still OK through October of 2020.

No, it doesn’t make any sense. This is the government we’re talking about…

“I have been a loyal subscriber of True Alpha,” a reader writes. “I’m shocked your company did not try to retain Lou Basenese.

“I was shocked all we received is an email today notifying us that he was leaving. Not great customer service, if you ask me.”

The 5: We’ve been proud to have Lou on the Agora Financial team these last 18 months. And we’d have been delighted to keep him on board, but in the end he decided to carry on with other ventures outside the newsletter biz. We think the world of Lou and wish him nothing but the best.

As for “all you received” yesterday… did you read the whole email?

A quick recap: To make you whole for the disruption, you’re about to get not one but two new advisories. Dollar Trade Club launched a couple of weeks ago. This service from Agora Financial mainstays Alan Knuckman and Zach Scheidt will deliver daily market commentary, analysis and trade recommendations.

You’ll also get The Alpha Shark Letter — a service we’re launching in early 2018 with a new addition to our team, Andrew Keene. Andrew will have a focus similar to Lou’s — both small-cap opportunities and the cryptocurrency space.

You’ll receive both of these advisories for the duration of your subscription term. Assuming you paid $49 for your subscription, you’re about to start receiving $196 worth of services — and that’s a low figure, based on heavily discounted charter-subscriber prices that might not be available in the future.

Whenever a publisher and an editor part ways — it’s sometimes inevitable in the course of doing business — we endeavor to ease the reader’s pain as much as possible. With the wind-down of True Alpha, I’d venture to say our team has gone above and beyond.

Final reader email of 2017: “How you guys make any money with a liberal (Democrat) mindset is beyond my comprehension.”

The 5: You must be new around here.

Seriously, though… We’re not sure what mental gymnastics you have to perform to read our remark yesterday that shrinking the federal government to pre-New Deal levels (as a start!) is symptomatic of a “liberal (Democrat) mindset”…

Even more seriously… This email bothers us because it speaks to a tribal mentality that’s been gathering speed in these United States since perhaps the mid-1970s and reached hurricane force in the Trump era.

Many people have signed up for what one writer aptly calls the “cult of MAGA.” Many others have cast their lot with the pompously named “Resistance.” For both of these sides, there is no room for nuance or subtlety or a pox-on-both-your-houses outlook. So when we engage in a bit of “anti-partisan” snark now and then in The 5, it doesn’t compute with these people. Literally, their brains can’t process it: If we don’t line up foursquare with “their side,” we must belong to “the other side.”

Reminder to both of those sides: The percentage of third-party voters last year was its highest since Ross Perot’s heyday in the ’90s. And an estimated 44.5% of the voting age population was so disgusted by the 2016 campaign spectacle that either they didn’t vote at all… or they did vote and they left the presidential part of their ballot blank.

P.S. We’re back tomorrow with the week’s wrap-up, 5 Things You Need to Know. But we’ll take off Monday for New Year’s Day while most markets are closed. The weekday edition of The 5 returns on Tuesday.

P.P.S. For a few days, we’ve been telling you about one of our newer premium services and how Alan Knuckman has closed 11 trades and booked 11 winners — with an average gain of 63.8%. That’s all since the beginning of October.

But enough from us. We’d like you to hear it from some satisfied readers…

A new round of trades gets underway with the new year. And Alan says you’ll want to be ready as soon as the market reopens Tuesday morning. Learn more about what makes his system so successful, right here.