If you’re still in the workforce, an email like this might have landed in your inbox early this morning…

The capital-S Statement is what Social Security used to send out via snail mail each year. Now, assuming you signed up for an account online, you get this email once a year and a link where you can view your Statement. Once you go through the rigamarole of resetting your username and/or password — because who’s gonna remember it for a website you use once a year at most? — you can then view the document.

On Page 2, below the rundown of “Your Estimated Benefits,” there’s an important disclaimer.

But never mind 2034 (which is almost surely an optimistic estimate). Let’s talk about 1983.

In that year, Congress enacted and President Reagan signed the Social Security Reform Act. Under the rationale that the system was going broke, the law raised “full retirement age” from 65 to — roughly speaking here — 66 for baby boomers and 67 for Gen-Xers.

But it wasn’t only future beneficiaries affected by the law. Another clause changed the way inflation was measured — allowing for lower annual cost-of-living increases.

A much more recent broken promise came in 2015.

With zero public debate, Congress and President Obama killed off “file and suspend” — a technique many couples were using to maximize their Social Security benefits.

It might have been one thing if Uncle Sam had used the added revenue to shore up Social Security’s Old-Age and Survivors trust fund — the one that will be exhausted by 2034. Instead, the savings were used to shore up the disability trust fund… and to stave off a steep increase in premiums for certain Medicare beneficiaries.

Nothing’s going to happen this year; Republicans would get slaughtered in the midterm elections this coming November if they acted now. Besides, as Senate Majority Leader Mitch McConnell said last month, “The sensitivity of entitlements is such that you almost have to have bipartisan agreement in order to achieve a result.”

That’s true. The 1983 law would have never reached President Reagan’s desk without an assist from the Democratic House Speaker Tip O’Neill. President Obama carried out the 2015 ambush on file-and-suspend with the connivance of Republican House Speaker John Boehner. In both cases, the bills passed the year after a midterm election.

If Democrats regain one or both houses of Congress this fall, look out.

But what would the Social Security Reform Act of 2019 look like?

In many ways, a lot like the 1983 law. For much of this decade, both Republicans and Democrats have proposed raising the retirement age for millennials to 69.

But current beneficiaries would again feel the sting of a downward adjustment to how inflation is measured. In 2011, Democrats were considering an inflation gauge called “chained CPI” as a way of monkeying with the annual cost-of-living increase, although they didn’t follow through. And Republicans wrote “chained CPI” into the tax bill last month when it came to how tax brackets are adjusted each year.

Two and a half years ago we took note of a MarketWatch column by retired Delaware econ professor Jeffrey Miller proposing just that. His argument was that spousal benefits are “unfair” to two-earner couples. All else being equal, he said a two-earner couple pays 50% more into the system than a one-earner couple… but gets only 33% more in benefits.

Then as now, our concern was not whether the proposal was right or wrong. Our concern is that, as the Social Security Administration states upfront, “Congress has made changes to the law in the past and can do so at any time.”

Will you be ready when that time comes?

Bottom line: It’s up to you to do whatever you can to maximize your retirement assets — whether you’re still in the workforce or you’ve already hung up your spurs.

For the last week, we reopened access to one of the most lucrative strategies we know of to juice a retirement nest egg. That access is now coming to an end. For reasons you’ll see when you click here, we’re taking this offer off the table at midnight tonight.

The major U.S. stock indexes are treading water as the week begins.

Trading volume accelerated late Friday afternoon, pushing all the big numbers to record closes — the Dow, the S&P 500, the Nasdaq, even the small-cap Russell 2000. But this morning they’re all either up a bit, or down a bit.

Among the names in the news is GoPro — one of the “hot” tech IPOs of 2014. At its peak that year, GPRO traded for nearly $100 because everyone wanted a video camera you mounted on your head like surfers and mountain bikers, right? 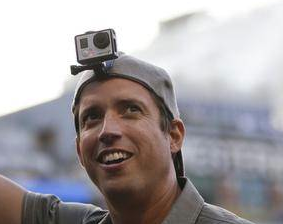 For the last time (presumably) we’re running this photo with the caption:
“Not a parody, actual CEO endorsement”

To our editors’ everlasting credit, none of them ever recommended GPRO except as a short-term trade. This morning the company offered weak guidance for the year ahead. As we write, shares are down more than 12% at $6.59 and the firm has hired JPMorgan to put itself up for sale.

“As long as investors are willing to shake off bad surprises, I expect stock prices to continue to advance,” says our income specialist Zach Scheidt with a near-term forecast.

Case in point: “Last week, Bloomberg published a report covering a vulnerability that could leave computers and smartphones susceptible to hacking. The problem has the potential to affect a large number of devices and is particularly troublesome for Intel Corp. and Microsoft Corp. While the news caught plenty of media attention, the effect on the stocks of both companies was quite muted.”

Indeed: MSFT is inching into record territory this morning. And while INTC has pulled back, it’s no lower than it was in mid-December. “This tells us a lot about the market mindset heading into 2018.

“Investors are willing to commit capital to these shares, expecting future profits to grow and overtake any additional expenses from this vulnerability. They’re willing to give companies the benefit of the doubt, instead of taking a ‘shoot first, ask questions later’ stance. And that’s good news for the overall market trend.”

The way the nonpartisan Tax Foundation figures it, there are 45 big Powerball winners this morning… and we already know who 44 of them are.

Of course, that’s not how you heard it on the news. There you were told only one ticket matched all six numbers to win the big $559.7 million jackpot over the weekend. No one has come forward to claim the prize yet, but the ticket was sold in Merrimack, New Hampshire.

Meanwhile, the 43 state governments that take part in Powerball — plus the District of Columbia — have already cashed in. “Only about half of Powerball ticket revenue is returned in the form of prizes, which is lower than the average for other lottery games,” write the Tax Foundation’s Morgan Scarboro and Jared Walczak. Subtract administrative costs and the rest of the ticket sales are revenue.

And many state governments win twice over, because lottery winnings are taxed as ordinary income. (But not New Hampshire — which has no state income tax.)

In most states, lottery winnings over $5,000 are subject to automatic withholding at the following rates… 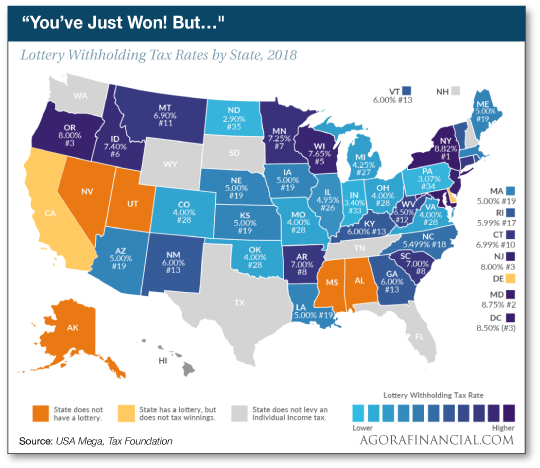 Curiously, high-tax California does not tax state lottery winnings. (Neither does Delaware.) But when it comes to the highest withholding, that distinction belongs to another high-tax state — New York.

Then again, New York might be about to do away with its state income tax.

You read that right. Gov. Andrew Cuomo hinted at the possibility last week during his State of the State address.

Yes, there’s a catch. No way is Albany giving up a penny of revenue it thinks is coming its way. Instead, the state would implement a payroll tax to be collected by employers but — and this is key — be fully deductible by the companies when they file their federal taxes.

Are you putting the pieces together? Under the new federal tax law, this maneuver would deny Uncle Sam the revenue it expects to collect by capping the individual state-local-property tax deduction at $10,000.

Yes, it’s an act of partisan spite. Left-leaning economist Dean Baker from the Center for Economic and Policy Research says as much: “If the income tax is reduced by the same amount as the payroll tax, the state gets the same amount of money, the worker ends up in the same place and the Republicans don’t get to screw the blue states.” Heh…

“I, too, have been annoyed that it is no longer possible to tell the difference between your 5 Min. Forecast and your junk mail,” reads the first of several such emails we got after Friday’s 5.

“I suspect you will find that first reader post will be the snowflake that causes an avalanche. Those of us who are regular readers and have several of your services do not need to be bombarded by the exact same messages several times a day, day in and day out.”

The 5: We swear you’re getting no more messages now than you did before — at least from us.

Anyway, back to the complaints…

“I second that reader’s comment about the annoying recent change in the From address of 5 Min. Forecast to now include Agora spam, er, ‘promotional’ emails.

“I’ve been reading The 5 for 10 years and the recent uptick in Agora-related spam is really annoying, to the point of deleting emails I actually intended to read, namely The 5. My smartphone thumbs are going numb from deleting so many annoying Agora emails, ha.”

“Although I can figure out pretty quickly if it is the ‘real’ 5 Min. Forecast,” says a third, “it does bother me somewhat to have to deal with that issue. Please don’t diminish the quality of your brand newsletter. Love The 5.”

“I too am disgusted with your decision to blast out sales promos under the guise of The 5,” writes a fourth. “It’s annoying enough to have to scroll past the internal ads, but I do it because I enjoy the content. I think it cheapens your franchise greatly, even bigly, to use it purely for sales.

“Please return to your practice of coming up with ridiculous subject lines to try to trick me into opening a promo. Maybe use **URGENT** like Rickards does.”

Finally, a counterpoint: “It’s been a while since I took a potshot at any of the chronic complainers that hang around these parts. You know, holiday goodwill and all that.

“That said, Friday’s grievance airing got me back in the spirit. One of the local cranks really took exception to The 5 Min. Forecast no longer being in the subject line? Really? Some of these folks have a seemingly bottomless bag of tricks!

“Even giving him or her a pass for missing The 5 now being in the From address, complaining that they don’t have a few seconds to click through several emails while letting you know that they have 45 minutes to spend complaining to your customer service department is incredibly amusing!

“Keep up the great work.”

The 5: Well, thanks for the encouragement, but the level of feedback is such that we’ll at least consider going back to the old way. On the one hand, we want to be responsive to readers. But on the other hand, as we pointed out Friday, no one said a word about it for a whole month…

P.S. Last chance: The following presentation that could dramatically affect your retirement will come offline tonight at midnight.