Two Numbers That Will Define 2018

On this, the sixth trading day of 2018, the establishment financial media have sunk into a long winter’s nap.

“U.S. equities opened higher on Tuesday,” wrote someone at CNBC, quite possibly in their sleep, “as investors remained optimistic about the market heading into the corporate earnings season.”

Let’s quickly translate: “Gee, the market opened up. What can we say about it? DURRR… Earnings season starts Friday. Let’s run with that!”

Under different circumstances, they could have just as easily run with, “U.S. equities opened lower on Tuesday as investors trimmed their optimism about the market heading into the corporate earnings season.”

But as long as the market is moving up and earnings season does start Friday… let’s play with that a little.

The CNBC piece quotes one Maris Ogg, president at Tower Bridge Advisors. Anticipating the onset of fourth-quarter earnings season, she says, “Q4 is going to be fine. I think the most important thing is going to be getting information on the impact of the tax cuts company by company. There’s no reason that shouldn’t be mostly positive.”

That’s a fairly mainstream interpretation. It happens to be on the mark, even if it’s a little vague. Really, what can you do with information like that?

Let’s get into some specifics with the help of Alan Knuckman, our man with his ear to the ground in the Chicago options trading pits.

Result? Dow 30,000. “With earnings season on the horizon, it won’t be long before the Dow trades through that level,” he added. “In fact, the last two earnings seasons have produced historically high numbers and I expect the figures announced this month to be even higher due to the projections that include the new tax law.” (For reference, the Dow stands as we write this morning at 25,344.)

Now, that’s information you can do something with. You can buy a Dow ETF like DIA (“the Diamonds,” as it’s known). And you’ll do just fine.

But if you’re looking to transform your prospects for a prosperous retirement, Alan has formulated a trading strategy around the 42 days of earnings season that we’ve ambitiously dubbed “the 42-day retirement plan.”

We rolled it out at the start of the most recent earnings season last October. So far, of 14 closed trades, every one is a winner. “I’ve participated in six of the 42-Day Retirement Plan trades,” writes a satisfied reader, “with a minimum gain of 30%, and I’ve got three winners over 100% within one month. These are the best trading recommendations I’ve ever received.”

Earnings season starts Friday. Learn more about how Alan’s strategy works at this link — no long video to watch.

If the Dow’s gains hold today, it will set a record close — which is something the S&P 500 and Nasdaq did again yesterday.

Gold is giving back some of its recent gains, thanks to a bout of dollar strength; at last check the bid was $1,311. Crude has crested the $62 mark — again challenging its mid-2015 highs.

That eclipses the previous record set in April 2008. Throw in auto loans and student loans and Americans’ nonmortgage debt is also at record levels.

While certain financial Cassandras are quick to point to such numbers as a sign of IMPENDING DOOM, we hasten to point out that as a percentage of the overall economy, credit card debt remains well below 2008 levels. Rising consumer debt is extremely typical in the middle and later boom stages of the boom-bust cycle.

Or as one strategist from UBS put it in USA Today, “It’s a potential early-warning sign but not a financial stability issue.”

Eventually, it will be a financial stability issue. And we’re keeping watch, rest assured. But for now, carry on.

Bitcoin remains a little under $15,000, its slump the last 48 hours a function largely of how “the bitcoin price” is a moving target.

South Korea’s government has been cracking down on cryptocurrencies in recent days. As a result, prices on several South Korean exchanges have zoomed much higher than the rest of the world, because they’re harder to trade.

Thus, the widely followed CoinMarketCap website has just recalibrated how it measures the price of bitcoin and other major cryptos — removing the data from several South Korean exchanges. Thus, bitcoin took a tumble. Other cryptos fared worse but are now stabilizing.

If news like this makes you shy away from cryptocurrencies… just remember there’s no “one price” for many asset classes. U.S. crude oil, as noted above, trades for $62.44… but Brent crude, the global benchmark, is $68.33. And that wide “spread” has existed for months now.

“The blockchain is real,” he said. “You can have cryptodollars in yen and stuff like that… The bitcoin was always to me what the governments are going to feel about bitcoin when it gets really big. And I just have a different opinion than other people.”

Whatever. The toothpaste is not only not back in the tube, it’s still smeared all over the bathroom sink…

The NFIB is out with the December edition of its monthly Small Business Optimism Index. While it pulled back from November’s lofty level, it’s a blip in the scheme of the year overall… 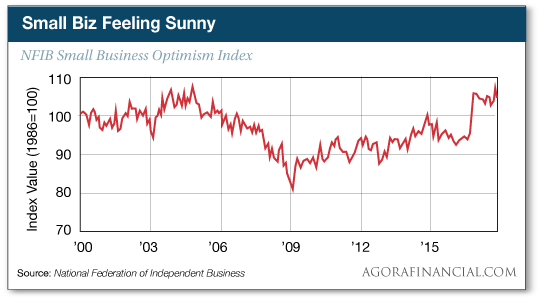 2017 ranks as the strongest year in a survey that goes back to the mid-1970s. “The 2016 election was like a dam breaking,” says Dunkelberg. “Small-business owners were waiting for better policies from Washington, suddenly they got them and the engine of the economy roared back to life.”

We’ve previously pointed out small-business owners have been welcoming the slowdown in new regulations. Now that the Republican tax plan is law — the NFIB dissed an early version of it but supported the final measure — it’s cause for more celebration.

True, taxes still top the list when small-business owners are asked their single-most-important problem; taxes are cited by 21%. But that’s followed closely by 19% who say good help is hard to find.

Gee, guess the hacking of India’s enormous surveillance-state database on its citizens wasn’t “fake news” after all.

As we mentioned last week, the country’s Tribune newspaper paid a mere $8 to hackers for a username and password allowing full access to “Aadhaar.” That’s the government database containing names, addresses, dates of birth — plus iris scans and all 10 fingerprints — on most of India’s 1.3 billion citizens.

The government of Prime Minister Narendra Modi dismissed the report as “fake news.” Now that same government has filed a “First Information Report” against the paper and its reporter Rachna Khaira — often a step toward criminal charges.

It turns out the question of whether Aadhaar is even legal has been before India’s Supreme Court. A final hearing begins a week from tomorrow…

On the subject of the Social Security “reform” we anticipate next year, a reader writes: “Why do you say, ‘Watch out if Democrats take one or more houses of Congress in November’? Are not the GOP just as complicit in changing (reducing benefits) to Social Security in 2019?”

The 5: All we’re saying is that in general, big changes to the system have taken place when the president and the speaker of the House belong to different parties, and they’ve taken place in the year after a midterm election.

We actually wrote about the “Social Security Reform Act of 2019” back in mid-2015. Then, we anticipated such legislation would end the file-and-suspend strategy many couples were using to maximize their benefits. Instead, file-and-suspend was killed only a few months later under the “zombie budget” deal struck by President Obama and House Speaker John Boehner.

Hoo boy, are we hearing more about the recent shift in the “from” and “subject” lines of our daily missives (and accompanying sales messages).

“Maybe no one noticed for a whole month,” a reader writes, “because they spent the month throwing everything away looking for the real 5? I’m sure I threw some away.”

“Nobody complained in a month because it takes a while before you get really annoyed, so annoyed that you take the time to write about it. Keep up the good work and get out the spam publicity!”

“I agree,” says a third. “Just send us news and tips — not ads or multiple reach-outs from related providers for the same ‘amazing get rich tomorrow offers.’ Sometimes I delete now instead of opening to see if there is useful news inside. Probably a lot of other paid subscribers do the same. Thanks for listening.”

“For those of us who easily get over 100 emails a day,” writes a fourth, “having ‘5 Min. Forecast’ back in the subject line would certainly help in the clean-out process.

“Additionally I, too, get a half dozen identical emails almost daily with sales pitches for other Agora publications because I already subscribe to multiple newsletters. With today’s technological advancements, you’d certainly think it would be possible to reconcile the accounts and combine these emails so your premium customers wouldn’t be subjected to the bombardment! Come on, techno-geeks — please figure it out!

“And yes — I understand sales, but multiple daily pitches aren’t necessary — or welcomed!”

And a fifth: “Shortly after you guys started this practice of spamming your paying subscribers I was sent yet another email asking if I wanted to renew my $100 subscription for only $50. Maybe I didn’t ‘say’ it to you, but I didn’t renew and I don’t plan to renew. I get enough ads without paying you to send them to me. My big debate lately has been if I should cancel the rest of my subscription or wait for it to end. So far I’ve chosen to just deal with it, as I actually like the content when there is some.”

Let’s clear up a few things…

And no, near as we can tell, more people are opening the daily issues lately than they did before the switch. (We can track that information too.)

Anywho, I have a previously scheduled discussion this week with our top marketing maven. I promise to add this topic to the agenda…

P.S. Make it 15 for 15 winning trades in Alan Knuckman’s 42 Day Retirement Plan. While we were preparing today’s episode of The 5, Alan recommended his readers unload half their position in call options on Boeing.

Depending on how and when they get filled, they’ll likely have doubled their money in just over three months.

With earnings season underway in three more days, there are plenty more opportunities where that came from. See for yourself.