“When you’re dealing with penny stocks, it’s all about hype and gaming the odds of success,” says Tim Sykes.

We introduced you to Tim yesterday. He’s the newest “big name” addition to the Agora Financial team. He parlayed a grubstake of $12,415 in bar mitzvah gifts into $2 million by the time he graduated from Tulane. Better yet, he did it while the dot-com meltdown was in progress from early 2000 to late 2002 and millions of other day traders were losing their shirts.

So about the hype and gaming the odds. Tim can’t emphasize that enough. It’s not about sales or profits or any of the other “fundamentals.” Heck, most of the stocks he trades don’t have sales or profits. They have a wing and a prayer.

“Real-world success isn’t required from the companies you trade in,” he explains. “Only the expectation of success matters.

“A company might be making no products, no revenues and zero profits, but if they get people to believe that there’s potential and that they’re going to do it, their stock price rises.”

We pause here to ask you to look inside yourself for a moment: Is this a mindset you can embrace?

Maybe you read Benjamin Graham’s The Intelligent Investor a long time ago. You know a thing or two about how to value companies.

Success in the penny stock realm requires you to throw all that out. As we said yesterday, this is the antithesis of the Warren Buffett approach to making big money. Besides, a sizeable chunk of Buffett’s riches come from sophisticated strategies and sweetheart deals that have nothing to do with what Ben Graham taught him at Columbia; that’s a story for another day.

“Penny stock companies’ prices are so low because they have few products, too. They’re very tiny operations. That makes it easy for them to fail and hard for them to succeed.”

That’s not a bug; it’s a feature. “They’re long shots. Penny stocks offer a high risk in exchange for a potentially high reward… If you were to hold these stocks for a year, you’d have tons of different trading days when something bad can happen. There’s a lot of risk holding penny stocks over a long period of time.”

But trading penny stocks, done right, can be a low-risk proposition. “All you’re doing is surfing the volatility,” Tim says — “you’re surfing the price momentum, if you want… It’s a cutthroat world out there, but it’s one that you can learn and profit from if you’re careful.”

Next Wednesday, Jan. 24, Tim is headlining a one-of-a-kind online event we’re calling America’s First Penny Stock Summit. There, he’ll show you how to trade penny stocks to pull down as much as $20,072 in a week — and do it week after week.

Note: Those gains do not involve buying or selling options.

Access to this event is free, but we can’t promise how long it’ll be before the available spots are filled. We encourage you to reserve your spot right away at this link.

After a monster gain yesterday, the Dow has shed 100 points today… but it’s still holding the line on 26,000.

More noteworthy is a sell-off in Treasuries, pushing yields higher: The yield on a 10-year note has broken through the 2.6% barrier — territory last seen in the autumn of 2014.

Trader chatter includes Apple confirming plans to “repatriate” much of its overseas cash hoard now that the Republican tax bill is law. That translates to a $38 billion tax bill for Apple and a promise to invest $30 billion in U.S. ventures and jobs. (That’s the public story, anyway — but our team is tracking developments behind the scenes that few people are talking about. We’re still chasing down the details. Watch this space next week.)

The big economic number of the day is housing starts, which fell 8.2% in December. Literally no one among dozens of economists polled by Bloomberg was expecting such a drop. That said, the number of permits — usually a better indicator of future activity — showed no change.

Yes, the “partial government shutdown” still looms. Tomorrow night’s the deadline for the White House and Congress to come to terms on a budget, or at least another kick-the-can stopgap measure.

“Yesterday was a hell of a crazy day,” says Daniel Marburger, director of Frankfurt-based CoinInvest. “Emails and phones did not stand still with customers asking how they could turn their crypto into gold.”

“Amid the wild bitcoin ride that’s wiped more than 40% off the cryptocurrency’s price in a month,” says an article at Bloomberg, “a pattern may be emerging: Sellers are switching out of digital gold and into the real thing… 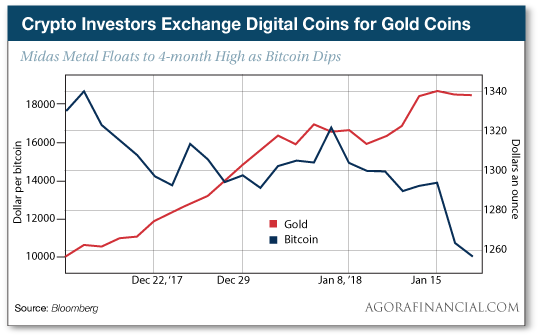 “The current price swings across seemingly every cryptocurrency are bringing to the fore a question that has loomed over the industry since its inception: To what extent can a virtual asset be a store of value? By swapping out of digital gold and into the real thing, some investors may be providing an answer.”

Mr. Marburger of CoinInvest doesn’t see crypto and gold as an “either or” proposition; in fact, he points out the similarities of the two assets. “Both are limited in quantity, easy to trade and you can store them decentralized,” he says.

The utility of gold? “No passwords you can lose, the volatility is much lower, sustainable growth and in the end you can hold your investment in your hands.”

At the end of the day, a diversified portfolio is the best portfolio. If you like holding gold, you’ll probably like digital coins… and vice versa. But don’t just invest in one asset; why not both?

As you might be aware, Amazon is looking to build a second headquarters to go along with the existing one in Seattle, touting the prospect of 50,000 high-paying jobs. As of last fall, the company had received 238 offers from local governments for tax breaks and other special favors.

This morning the company announced it had whittled the list down to 20. Fresno, California, which we spotlighted in November, didn’t make the cut.

Of all the ways that cities and states were prostrating (prostituting?) themselves to land Amazon’s “HQ2,” Fresno stood out to us by promising to shovel 85% of all taxes and fees generated by Amazon into a special fund for housing, roads and parks in HQ2’s vicinity. The money would have been overseen by a board divided equally between Amazon officers and city officials. 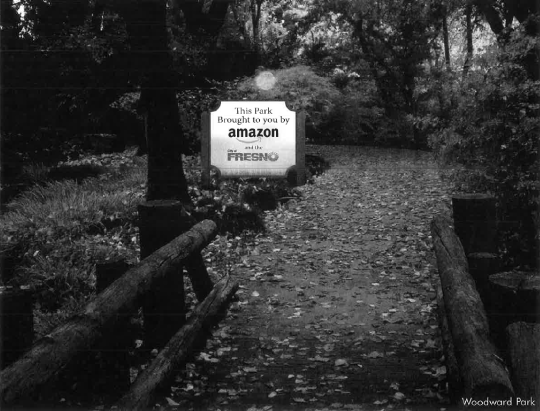 A lovely sight on a morning jog…

Oh, well. While Fresno is out of the running, Chicago is still in contention with its “income-tax diversion” scheme. The estimated $1.32 billion in income taxes that would be paid by Amazon employees would go not to the state but instead to… Amazon. Yes, the workers would basically be paying taxes to their employer. 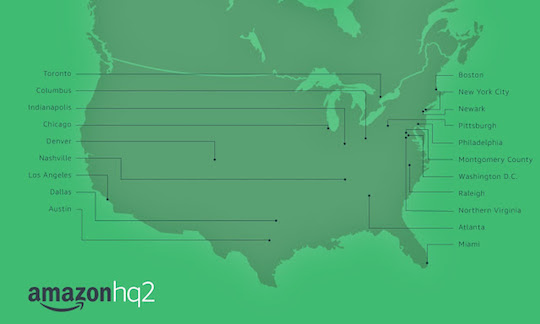 The staggering thing is that three of the finalists are concentrated in metro Washington, D.C. — the district itself; Montgomery County, Maryland; and “Northern Virginia” — no doubt to ensure maximum future lobbying power with the federal government. Wanna bet Amazon is pitting the three against each other to see who’ll come up with the most giveaways?

To the mailbag: “Since James Altucher is still a bull on bitcoin (which I have purchased along with ether and litecoin), is James promoting bitcoin in order to protect his millions from evaporating, or does he really think it’s going to settle down and go back up?”

One of the points James emphasized during his CNBC interview yesterday is that you can’t be into crypto exclusively for the short-term gains. You have to understand and appreciate the potential of the technology behind it.

Or as he put it in one of his more well-circulated essays, “The underlying technology of bitcoin — which involves heavy amounts of cryptography, financial know-how and basics of contract law, plus the blockchain — has hundreds of use cases that we have only just begun to play with.

“EVEN IF bitcoin is never used as a coin (although note: It’s being used every day as money) there are hundreds or thousands of other uses for bitcoin that have nothing to do with the basic money use.

“I won’t get into the weeds here, but suffice it to say that ALL of contract law can be (and will be) eventually replaced by bitcoin.

“And ALL of logistics will be replaced by bitcoin, e.g., UPS is replacing all of their internal logistics (tracking millions of packages every day going from millions of locations to millions of other locations) with bitcoin technology.”

His point? One you grok all that, you have the patience to ride the inevitable short-term pullbacks and shakeouts that come as the price climbs long term.

“China saying America is a credit risk — talk about the pot calling the kettle black!” a reader writes after yesterday’s episode.

“China doesn’t know/want to know what a quarter of its economy is doing.”

The 5: It’s not for nothing that Chinese Premier Li Keqiang once said his country’s GDP figures were “man-made” and “for reference only.” If he really wanted to know what’s going on, he looked at electricity production, rail volume and bank lending.

We know this, by the way, from the U.S. diplomatic cables pinched by Chelsea Manning and given to WikiLeaks back in 2010.

In subsequent years, several organizations tried to compile a “Li Keqiang Index.” We chronicled several of those efforts here in The 5, even as we were less than sure of their utility.

By 2016, most of those analysts gave up trying. Among the problems: “The services sector has grown continuously more rapidly than GDP, and its share of the economy now exceeds that of industry,” said Nicholas Lardy of the Peterson Institute for International Economics.

Yesterday, the Chinese government released its 2017 GDP figure — up 6.9%. It’s the first time the rate of increase had grown since 2010.

For whatever that’s worth. Probably not much. It’s “for reference only.”

P.S. Congratulations to Zach Scheidt’s Lifetime Income Report readers. Today Zach urged them to take gains on several long-term positions — including 35% in a little over a year.

If you’re not among Zach’s readers yet, the best introduction is his Big Book of Income — packed with 47 ways you can grow your income starting this month. We’ll ship you a free copy, as long as you can spot us $4.95 for shipping. Details here.