Nutella, Marijuana and a Dollar Farce 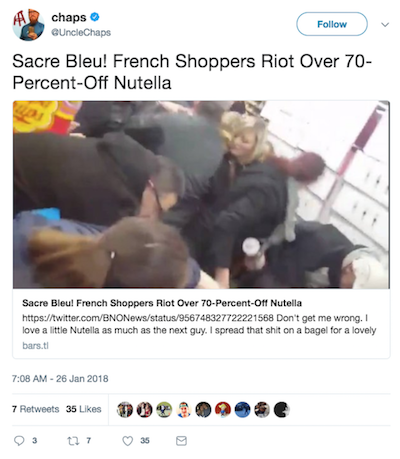 Yesss! It’s a new Nutella caper in The 5 — an occasional feature going back to 2013, when thieves in Germany made off with 5.5 tons of the hazelnut-cocoa spread.

This week, the Intermarché chain of stores in France offered deep discounts on Nutella. Ordinarily, it retails there for $5.59. But Intermarché slashed the price to $1.74 and people went juuust a little nuts. “They are like animals,” one customer told local reporters. “A woman had her hair pulled, an elderly lady took a box on her head, another had a bloody hand.”

What is it about Nutella? You’d think the stuff would be regulated as a controlled substance in some jurisdictions.

“A big swing state is gearing up for legalized pot sales in the next couple of months,” says our penny pot stock authority Ray Blanco.

Hey wait, we did a cannabis update last Friday. Is it becoming “Fire-it-up Friday” here at The 5?

Key point (or Keystone point): “Despite recent volatility in the recreational pot market thanks to Attorney General Jeff Sessions, medical marijuana is off-limits to Washington,” Ray says. “The Rohrabacher-Blumenauer Amendment forbids the Justice Department from using any resources to interfere with state legal medical marijuana until at least January 2019.”

And an extension of that date will likely work its way into the next federal budget, assuming Congress can ever pass one.

Pennsylvania is the No. 5 state in population. Marijuana Business Daily estimates that in time the state’s dispensary sales could top $100 million a year. And Ray says it’s significant that while Pennsylvania is politically divided, the MMJ legislation passed with bipartisan support.

“Pennsylvania,” Ray concludes, “could quickly become one of the biggest markets for marijuana nationwide.”

But the big story in marijuana news today — you’ll get that reference if you’re from Philadelphia — is the fallout from industry’s biggest merger to date.

There’s green gold to be had in Canada’s prairie provinces: On Wednesday, Alberta-based Aurora Cannabis announced a deal to buy Saskatchewan-based CanniMed Therapeutics.

“Timing is everything here,” says Ray, who reminds us recreational cannabis becomes legal across all of Canada July 1. “Pot companies are looking for ways to increase capacity. Together, the Aurora/CanniMed merger will result in about 130,000 kilograms in annual pot production capacity.

“Make no mistake, this is an expensive deal. Together, the two companies are worth more than Canada’s entire marijuana market. Of course, the reason is that revenue growth is off the charts. These companies are still in the early innings.”

Aurora is a holding in Ray’s Penny Pot Profits portfolio. It’s sold off a bit on the news, not that Ray’s readers mind — at last check they’re still up more than 350% in less than three months. For access to all of Ray’s cannabis speculations, look here.

To the markets, which are being roiled by still more dollar drama in Davos, Switzerland.

The farce began on Wednesday when Treasury Secretary Steve Mnuchin departed from decades of tradition and told reporters at the World Economic Forum, “Obviously a weaker dollar is good for us as it relates to trade and opportunities.”

After we went to virtual press yesterday, the president landed in Davos and was interviewed by CNBC. Munchin’s comments “were taken out of context,” said The Donald: “The dollar is going to get stronger and stronger, and ultimately I want to see a strong dollar.”

Finally today, Mnuchin himself went on CNBC and asserted, “What I said was actually very even-handed and consistent with what I said before,” and a strong “long-term dollar” is in the country’s best interests.

Right. And I Don’t Know is on third.

OK, where does that leave us? Checking our screens, the dollar index is in danger of breaking below the 89 level for the first time since late 2014.

“The dollar is now off to its worst start of the year since 1987,” writes Greg Guenthner in today’s Rude Awakening. “It will probably take more than a couple of well-timed sound bites to bring it back from the brink.”

Meanwhile, gold — the anti-dollar — is regaining some of the mojo it lost when the president piped up yesterday. After slipping below $1,350, the Midas metal is back to $1,353.

We don’t have much else to say about the circus in Davos, except this: Trump said in his big speech this morning that America is “open for business.” So he’s inviting foreign investment in America. Which sounds fine to us… but does he realize that will drive up the trade deficit, which he says he’s bound and determined to reduce? Oy…

You know something? This is what it looks like when an empire is in decline.

Meanwhile, the Dow is set to end the week at another record high. As we write, the Big Board is 12 points away from 26,500. The S&P 500 and the Nasdaq are up even stronger.

In other asset classes…

The big economic number of the day is the Commerce Department’s first guess at fourth-quarter GDP. It rings in less than expected at an annualized 2.6% (dragged down in part by the trade deficit — heh). But it’s still the best fourth-quarter showing since 2013 and it comes on the heels of a second and third quarter that both clocked in above 3%. By post-2008 standards, not bad. 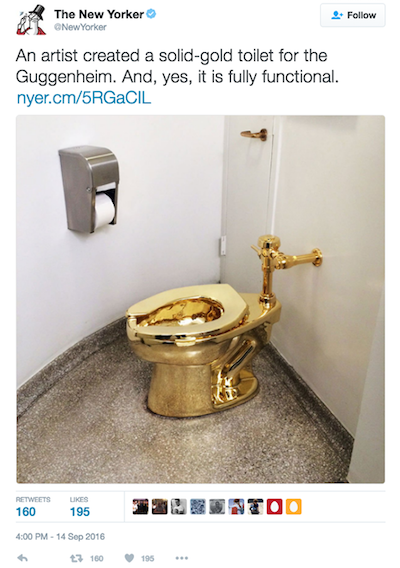 Fast-forward to this week… and the president submitted a request to the Guggenheim to borrow a van Gogh for his living quarters at the White House.

The reply from Guggenheim curator Nancy Spector, roughly paraphrased: Sorry, can’t accommodate. But the exhibit featuring this lovely gold toilet is over now. The artist is offering it to the White House for a long-term loan. Any interest?

Since its debut, the item has seen, uhh, a certain amount of wear: As we said in our original account, the 18-karat gold throne was installed in a public restroom and was available to any admissions-paying visitor. It’s estimated more than 100,000 have used it since.

To the best of our knowledge, the White House has not yet made a counteroffer. How will the “art of the deal” play out on this one? 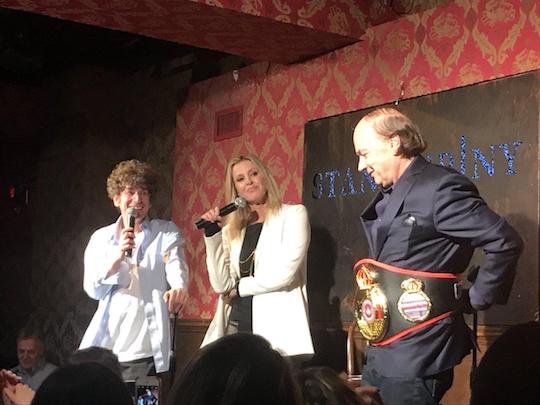 And the winner is…

Thanks to everyone in the New York area who ventured out to witness the bout in person. Watch this space for further announcements about a video and/or transcript.

“Dave, the last time a White House administration official bad-mouthed the U.S. dollar, gold did an 8-bagger,” a reader follows up from yesterday’s episode of The 5.

“It surged from about $100 an ounce during the late 1970s to $800-plus in January 1980. If we experience a similar run-up this time, gold is headed for $10K by the end of next year (four years after it bottomed in December 2015). How about that! This is the target Jim Rickards has been predicting as gold’s implied nondeflationary price.

“Plus, as Jim explains, this is a conservative estimate. Depending on assumptions (like the ratio of physical gold to printed money) as well as exogenous events, that price point grows over time (e.g., because the amount of gold doesn’t go up much but printed money does).

“So the near-term target could be even higher — and it’s onward from there.

“Unfortunately, no one under the age of 40 experienced that Carter-era ‘crisis of confidence’; and the worst inflation of many people’s lifetimes has been in asset prices rather than consumer prices. If a weak dollar is indeed official U.S. policy now, they’re about to get an education.

The 5: It might take a little longer to play out this time.

“You gold junkies can always find a way to sugarcoat your favorite element, No. 79,” counters another reader.

There are reasons gold priced in dollars didn’t move much during the 1980s and ’90s, but we’re running up against the limitations of our 5 Mins. today…

“I’d like to give you a BIG ‘THANK YOU’ for providing this free newsletter!!” a reader enthuses. “And ALL of the other free newsletters I receive, as I’m a ‘paid subscriber’ to one Agora Financial newsletter and one letter from your brother/sister organization.

“I’m quite grateful for that ‘gentle advice’ for ‘confidential’ you gave on Wednesday. As I’m in pretty much the same boat, slightly different circumstances, it was nice to see. And appreciate the explanation about ‘premium services.’ I’ll be sticking with my ‘$49 subscriptions,’ because I really enjoy and value them. Not to mention, I got some really great freebies (several MOST excellent books) when I signed up with them that I keep reading over again.

“And while I’m not in a position to take advantage of your premium offerings (yet!), I do appreciate the fact that I can check them out. At least it gives me some idea of whether or not I’d be interested them in the future. Have to admit, it really hurt not to be able to jump on Mr. Rickards’ crypto recommendation (!!!), but I can at least follow along with his recommendations about DLT via my letter!

“Thanks for your time, effort and patience!!! Looking forward to my next issue!!!”

[We’ll interrupt the dear reader only to break up a looooong sentence here.]

“However, when you take cheap shots at the Knack, you have exceeded my patience threshold! Their first album was a power pop masterpiece. Yes, ‘My Sharona’ received enough airplay to burn out several sets of speakers, so I understand the savage mocking that you gave it, but it has stood the test of time pretty well.

“That said, I thought that ‘Good Girls Don’t’ was a better track. Thanks for letting me share my guilty pleasure and for an always informative, educational and amusing 5!”

“I accept Jim Richards’ knocks against bitcoin, but yesterday’s ultracrepidarian attack on the Knack was purely blasphemous.”

Says another: “Awesome and hilarious Knack reference. You will never see that in any other e-letter. Got me laughing out loud. Thanks.”

Finally: “Your ‘My Sharona’ comment caused me to LOL. How old are you anyway, Dave? :)”

P.S. If you got busy today and missed Jim Rickards’ exclusive briefing about the one cryptocurrency he actually likes — it meets a strict five-point set of criteria and he believes its profit potential is just this side of infinity — you can watch a replay at this link.