What Happened to the “Biggest Quarter Ever”?

Oh, now all of a sudden the Apple boo-birds are surfacing.

Yesterday, the mainstream headlines — cited right here in The 5 — pointed to Apple notching its “biggest quarter ever” when the company reports its numbers after the closing bell on Thursday.

But this morning? “Apple Stock Sinks as High Hope for iPhone X Sales Fades,” says The Associated Press. The Washington Post graces us with the headline “Do iPhone X Sales Spell Trouble for Apple?”

The latter reminds us about “Betteridge’s law of headlines,” popularized in 2009 by the British technology journalist Ian Betteridge. As summed up by Wikipedia: “Any headline that ends in a question mark can be answered by the word no.”

We suspect the only reason the Apple naysayers are crawling out of the proverbial woodwork is that the broad market is selling off.

Really, if the S&P 500 were still screaming toward all-time highs — the index notched 12 record closes this month — the chatter about Apple would be nothing but sunshine and lollipops.

Well, let’s talk about the sell-off as long as we brought it up.

By the close yesterday, the Dow gave up most of the gains that had pushed the index to a record close on Friday — a loss of 177 points. As we write this morning, the Big Board has surrendered another 235 points.

We’ve gone so long without even a piddly 3% pullback in the market that we’ve forgotten what it looks and feels like. The last one was shortly before Election Day 2016. (We came close last August, but not quite.) Up until then, such pullbacks were commonplace — 3%, 5%, even a 10% “correction” now and then — over the course of a bull market that’s now almost nine years old.

The reason for the drop yesterday and today? The mainstream has no shortage of explanations — a rout in the bond market, a scare in the health care sector — and we’ll get to those shortly. But the simplest explanation is the one they’ll never tell you: We’re just plain overdue for a pullback.

So whatever’s happening in the market this week has no bearing on whatever Apple announces Thursday. Remember, these are numbers for the quarter ended Dec. 31.

But aside from the quarterly numbers, we have reason to believe AAPL will do something on Thursday that could shock nearly everyone. And the way to play it will not be owning shares of Apple or buying call options on Apple.

This comes back to something we mentioned yesterday — a side project our Zach Scheidt has been working on the last seven years. He’s toiled and tinkered… and wondered if it would ever be ready for prime time. When Apple announced plans to repatriate its $252 billion hoard of cash stranded overseas — a move made possible by the new tax law — Zach knew the moment had arrived.

That said, some of his readers who’d been beta-testing the strategy in recent months have made out just fine, booking gains of…

We’ll take the wraps off this strategy in a special announcement tomorrow at 1:00 p.m. EST. You don’t have to sign up in advance for access; we’ll send you an email with the link at that time and you’ll be all set.

It’s not just stocks selling off this week — it’s bonds too. Not only in the United States, but globally.

Mainstream financial media chalked up the stock market drop yesterday to the bond rout. Which might well be the case… although we hasten to add that often, a sell-off in bonds is symptomatic of a “risk-on” trade that gives the stock market new fuel.

We’re still skeptical of claims that a 36-year bull market in bonds — that is, a trend of relentlessly falling interest rates since the early 1980s — is over. It’s just too facile to say, as many pundits are saying now, that “no one will step up to buy Treasuries” because the Chinese have announced plans to dial back their buying, and the Federal Reserve is actively selling its pile of Treasury debt.

Consider that global investors looking for a safe yield still have little choice other than U.S. Treasuries… because yields elsewhere are still far lower than they are here. If you look at 10-year British “gilts” with a yield of 1.5% and 10-year German “bunds” with a yield of less than 0.8%… well, that 2.71% yield you can get in the United States looks mighty good by comparison.

In other words, demand for Treasuries will still be there — keeping a floor on prices and ultimately a ceiling on yields.

Yes, there will come a time when “no one will step up to buy Treasuries”… and it’s going to blow up the federal budget deficit to staggering proportions. But we’re not convinced now’s the time.

Then there’s the sell-off in health care — based on precious little more than rumor and innuendo.

From Bloomberg: “Amazon.com Inc., [Warren] Buffett’s Berkshire Hathaway Inc. and JPMorgan Chase & Co. said they plan to collaborate on a way to offer health-care services to their U.S. employees more transparently and at a lower cost. The three companies plan to set up a new independent company ‘that is free from profit-making incentives and constraints,’ according to a short statement on Tuesday.”

How will they pull it off? Well, that’s still in the planning stages, we’re told. But the mere notion of Amazon storming its way into health care — with Uncle Warren and the biggest commercial bank in on the scheme — is enough to knock the stuffing out of health care stocks today. The insurer UnitedHealth is responsible for about a third of the Dow’s losses.

Maybe this mighty trio can pull it off. But there was something called the “Health Transformation Alliance” a couple of years ago — a venture including the likes of IBM and American Express. It quickly surrendered to the health care cartel, partnering with CVS and… UnitedHealth. Heh…

In addition to stocks and bonds, crude is selling off hard — a barrel of West Texas Intermediate down to $64.31. That’s a drop of more than $2 since last Thursday.

Gold is looking positively placid by comparison, the bid $1,339 at last check. Bitcoin has slipped a hair below $10,500.

“Sure, we don’t know exactly what bitcoins are, or how they work, but that shouldn’t come between you and some finger-lickin’ good chicken,” says Kentucky Fried Chicken on its Canadian Facebook page.

While many thought it was a joke, KFC Canada promoted a limited-time offer to purchase a bucket of chicken — with the fixins’ — for $20 worth of bitcoin. The Facebook page even provided a ticker of the changing bitcoin value superimposed on its iconic red and white bucket. 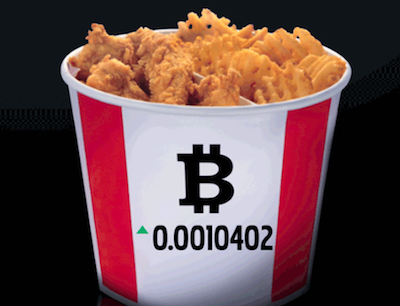 The Facebook post included a link to a payment hub to exchange bitcoin. While some commenters on the post noted the transaction fee ratcheted up the price to $40, bitcoin enthusiasts pounced on the deal (non-deal?)…KFC sold out in just one hour.

According to an article at Financial Post, KFC Canada also “alluded to bitcoin’s alleged founder, Satoshi Nakamoto, a pseudonym for one or several unknown individuals who launched the virtual currency,” with KFC writing, “If Satoshi reveals his true identity, his bucket is on us.”

(Perhaps Satoshi could be the next Colonel in KFC’s television ad campaign?)

“While it is unusual and quirky,” said a company spokesman, “it [bitcoin] is a legitimate way to purchase KFC.” Well, in Canada…

We’ll do our best to summarize his concerns: He signed up for Rickards’ Crypto Profits — a service we launched this month now that Jim Rickards has begun to identify cryptocurrencies that he actually likes, in contrast to bitcoin and the like. The reader took keen notice of Jim’s first recommendation.

Then, while reading The 5 late last week, the reader followed a link to another promotion from a new editor we recently brought on board to beef up our crypto coverage. (We’ll introduce you to him sometime in the next week or so.) It featured a screenshot from one of the crypto exchanges and said, “There are more than 1,000 bad investments on this board.”

The reader noticed the name of the crypto Jim recommended and jumped to the conclusion that it was a “bad investment” in the eyes of this other editor. “That’s a bitter pill to swallow!” the reader says.

Well, sorry for the misunderstanding there. It was a generic screenshot depicting a dozen or so cryptos. Yes, there were more than 1,000 “bad investments” on that board… but there were others he considered perfectly fine. So you can rest easier.

Having said that… we should note that unlike other publishers, we don’t enforce a “company line” around here. On occasion, editors will disagree about the worth of one investment or another.

The most valuable thing you pay for when you subscribe to a publication from us is the unvarnished truth as the editor of that publication sees it. We won’t do anything to dilute his or her candid insight.

We tackled this matter in a rare single-topic episode of The 5 a little over three years ago. For newer readers especially, it’s worth a look.

“What subscriptions would you recommend for a beginner with no experience and little cash flow?” a reader writes.

Well, if you’re reading The 5, we know you’re already subscribed to at least one of them!

It depends on where your interests lie. If it’s big-picture macroeconomic stuff, Jim Rickards is your guy. If it’s penny stocks, this is right up your alley. Income investments? We have a free-book offer that’s still on the table. High-tech and biotech? Here’s the scoop. And if you’d like some wisdom about life to go along with your investment guidance, James Altucher is still offering access to his cryptocurrency masterclass.

Every one of these newsletters is easily affordable, and while no recommendations come with a guarantee, most of the recommendations therein skew toward the low end of the risk scale. Good luck!

P.S. At the higher end of the risk curve — not for beginners! — is a patent-pending tool with the potential to pull down thousands of dollars in the space of only two weeks. And you can lay on these trades week after week. Details here — they’re available for the next six days.