Laugh In the Face of Volatility

Well, there’s been no shortage of “large market moves” this week. After we hit the send button yesterday, the latest round of selling accelerated. By the close, the Dow notched its second-biggest point loss ever — Monday is the record — and the index formally entered “correction” territory, down 10% from its all-time record two weeks ago.

As we write, the Big Board has shed another 300-plus points. It’s now back to levels last seen in mid-November.

So what about those opportunities for “big, fast profits”?

Even as the market was tanking a week ago today, Alan observed fascinating activity in options on Twitter (TWTR). He even spotted the potential for a “short squeeze.” (Brief description: Short sellers betting on a price decline find their bet going against them… and they have to buy more shares of the stock just to avoid losing a bundle.)

This options activity is the “someone knows something” indicator he uses to make short-term trading recommendations.

Yesterday, amid another market bloodbath, he urged readers to sell half the position — for a 72-hour gain of 235% — and hold onto the rest for even bigger gains by Feb. 23.

In the interim, TWTR reported its quarterly numbers. It booked a profit. Hey, there’s a first time for everything.

Again, someone knew something. And Alan’s one-of-a-kind system — it has a patent pending — sniffed it out.

Alan tells us the system is signaling a spike of intriguing activity today. He’s figuring out the best way to play it, and he’ll issue a recommendation Monday morning. As our publisher explains here, it could make a substantial difference to your retirement.

Sign of the times: Cash-strapped consumers who have to have a $1,000 iPhone X might soon be able to finance it through Goldman Sachs.

The Wall Street Journal quotes anonymous sources as saying the two companies are working out an arrangement. Goldman is steadily worming its way into consumer banking, and the paper points out this would be a logical next step: Consumers “could take out a loan from Goldman instead of charging [their purchase] to credit cards that often carry high interest rates.”

Goldman might be onto something. As it happens, the Federal Reserve came out with its monthly consumer credit numbers this week. Outstanding credit card debt reached another record total — $1.028 trillion.

Well, this is the sort of thing that happens late in the boom phase of the boom-bust cycle. Kinda like, say, 2006. Which happened to be the year Saturday Night Live did its famous “Don’t Buy Stuff You Cannot Afford” skit — featuring Steve Martin and Amy Poehler as a cash-strapped American couple.

Herewith, before the rest of our musings today, some quality Friday entertainment. Enjoy… 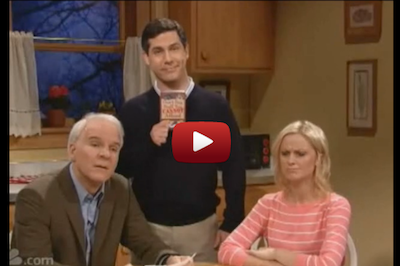 This was a year before the iPhone came on the market…

The skit was so profound our executive publisher Addison Wiggin saw fit to include it in his 2008 debt documentary I.O.U.S.A.

Meanwhile, Congress and the White House have gone on their own spending spree with money they don’t have.

As you’ve probably heard, early this morning Congress passed and the president signed a “far-reaching budget deal,” in the words of The New York Times. It raises federal spending by nearly $300 billion over the next two years, above and beyond previously planned spending levels.

Understand this still isn’t an actual fiscal 2018 budget — which Congress was supposed to have passed by Sept. 30 of last year. The legislation buys another six weeks to get that done. So apparently we’re not out of the woods with these “partial government shutdowns.”

But hey, the debt ceiling is suspended through March 2019. No more worries about an “X-Date” for now.

The whole thing is so farcical I asked our Jim Rickards yesterday if it’s likely that either Moody’s or Fitch downgrades U.S. Treasury debt from its pristine AAA credit rating. Standard & Poor’s, the other Big Three ratings agency, did just that after a debt-ceiling circus in 2011 — setting off weeks of market turmoil.

Jim said such a downgrade is inevitable.

“It’s not just the budget deal; it’s also the Trump tax cuts, which will cause deficits to increase more than estimated. Plus, none of the projections includes a recession, but we all know they happen. That will add spending through automatic stabilizers (such as unemployment and food stamps) and reduce tax collections.

“The U.S. will end up with the same credit rating as Italy, maybe just slightly higher, but definitely not AAA.”

We caution that inevitable events aren’t necessarily imminent. S&P issued a warning months before its 2011 downgrade; Moody’s and Fitch have done no such thing. Not yet, anyway.

[Ed. note: Jim has something you want to see. In fact, if you pay taxes to help support Uncle Sam’s spending habit, you need to see it. It’s been a D.C. “secret” for 15 years — until Jim recently took the wraps off. See for yourself. Please note the offer that comes with the revelation of this secret expires at midnight Sunday night.]

It’s been a rocky week not only for stocks, but also for crude oil.

This morning a barrel of West Texas Intermediate fell below $60 for the first time this year. It’s been quite the tumble from above $66 at the start of this month.

Bitcoin is up slightly today at $8,411 — closing out a week that’s been at least as tumultuous for cryptocurrencies as it was for traditional asset classes.

Crypto took twin blows this week — from China and from major U.S. banks.

“On Monday,” James Altucher explains, “a report released by a Chinese news source indicated that China would begin banning citizens from using overseas cryptocurrency exchanges” — in addition to the previous ban on domestic exchanges.

James says this is long-term good news because it will take some of the volatility out of the crypto markets. “By instituting rules to prevent citizens from cryptocurrency trading, the government is moving to discourage new investors from investing in cryptocurrencies.

James sees the crypto crackdown by U.S. banks in the same way.

Several of the biggest banks are now forbidding customers from buying crypto with credit cards. Meanwhile, Visa and Mastercard are now treating crypto purchases like cash advances — complete with higher fees and interest that accrues immediately.

James’ guidance here is the same as the book recommended to Steve Martin and Amy Poehler: Don’t buy stuff you cannot afford.

“Part of the massive growth we saw in December was likely fueled by these new users buying with credit cards,” he says. “Unfortunately, this is the wrong crowd to be investing alongside. Because they are buying cryptocurrencies with borrowed money, these are the investors who will sell first when prices decline.

“But the good news is one of the unique attributes of cryptocurrency markets is the fanatical following of its investors. Many cryptocurrency investors believe in the market’s long-term potential to disrupt global financial systems. These investors won’t sell their cryptocurrencies — ever.

“With the latest rules, I predict that cryptocurrency markets will gradually become less volatile. This will further drive out gamblers and encourage investment by people who believe in the long-term potential of the technology.”

Meanwhile… debit cards still work fine if that’s the route you want to go. But if you really want to keep fees to a minimum, you can wire money into a crypto exchange. If you use Coinbase, you can link your bank account directly.

Lost amid the market upheaval this week was a true milestone in the legal cannabis trade.

It took a court battle going back more than three years to make it happen, but it’s official now.

It’s a limited victory, for sure: The credit union cannot deal with businesses that “touch the plant,” to use industry parlance. “Instead,” says Ray, “it will cater to companies that provide ancillary services to the legal pot industry, businesses that have had trouble opening accounts at mainstream financial institutions due to federal banking regulations.”

But it remains a critical development: “This is the first time the Federal Reserve has acknowledged the legality of banking for the cannabis industry.

“Importantly, this week’s news could help drive upside in pick-and-shovel-type ancillary businesses that support the legal pot market. I’ll continue to keep a close eye on this emerging trend.”

To the mailbag, and a revisit of the Highway Trust Fund: “Dave, is it just me or is it a contradiction in terms (and thoughts) when the name of some government project is attached to the phrase ‘trust fund’?

“More importantly, where does all that money go? It’s funny how it keeps getting raided and channeled to the gubment’s cronies via earmark projects and pork-barrel spending. Likewise with public pension funds, which make the news from time to time for being ‘underfunded.’

“Really, you can’t make up these terms. Likewise with the accompanying narratives we get from the MSM. They are incredible.

“There are lies and damn lies — and then there’s the mendacity of politicians and news readers. Some of them actually seem to think it’s an effective smoke screen for their skullduggery.

“Thanks as always for being a beacon of truth! It is uncommon.”

Last, an inquiry about the “boring, long-winded videos” we use to pitch our various and sundry services.

“Do your statistics demonstrating how long copy sells more than short copy take into account all the people who click off the pitch without ever starting it because they suspect it will be long?

The 5: Well, we know how quickly people click out. And that’s vital information in assessing the interest level people have in an idea.

Ultimately, that’s what it’s all about. If the idea is compelling enough to grab a reader’s attention, he or she will sit through the video — or at least wait long enough for the transcript option to pop up.

P.S. We’re sure mainstream financial pundits will spend much airtime and bandwidth trying to predict how the market will open Monday morning.

Which is almost useless information that won’t help you.

Contrast that with something else happening Monday morning that could make a dramatic difference to your retirement.

Check out the video here — it’s only three minutes — explaining what’s at stake.