Maybe it was Alan Greenspan who killed the stock market rally this month.

“There are two bubbles,” sayeth the former Federal Reserve chairman to Bloomberg TV on Wednesday Jan. 31: “We have a stock market bubble, and we have a bond market bubble.”

Two days later, Treasuries started selling off hard and the Dow began its wicked slide into correction territory — a 10% fall from its Jan. 26 peak. (After monster rallies yesterday and Friday, the Big Board is now down about 7.9% from that peak. As we write, it’s more or less flat from yesterday’s close at 24,567.)

Heh, we kid… If Greenspan killed the rally, it would be a first: He famously warned of “irrational exuberance” in the stock market in December 1996. The Dow soared 81.4% from there, finally topping out in January 2000.

Along the way, he less famously declared that valuations of dot-com companies were “pie in the sky.” Which was undeniably true. But he said that in January 1999, and the tech-heavy Nasdaq composite index doubled over the next 14 months before collapsing.

If anything, Greenspan is late to the party this time.

Said The Wall Street Journal nearly a year ago, “This crazy, expensive stock market is for speculators, not investors.”

Last August, Moody’s Analytics chief economist Mark Zandi declared, “The only other time in the past half century that stock prices have been so highly priced was during the tech bubble.”

To a degree, “bubbles” are a subjective thing. As the late Supreme Court Justice Potter Stewart once said of pornography, you know it when you see it. Dot-com companies with no sales that jumped five- or 10-fold when they went public in 1999? That’s a bubble. Suburban tract homes sold to people with no income or assets in 2005? That’s a bubble.

So it might surprise you to learn that by one authoritative estimate, there’s only an 18% probability we’re in a bubble right now.

So conclude researchers on three continents who first came together in 2013 for an exhaustive study that went back more than a century. Professors from Yale, Australian National University and Singapore National University examined explosive price movements — both up and down — in the S&P 500 (and an equivalent market measure for years before 1950).

“The team created a bubble indicator for the S&P 500 that has been a reliable signal for when stock market bubbles reach their danger zones,” explains our resident quant Jonas Elmerraji.

The numbers were just updated through year-end 2017. Again, they show an 18% likelihood of a bubble… 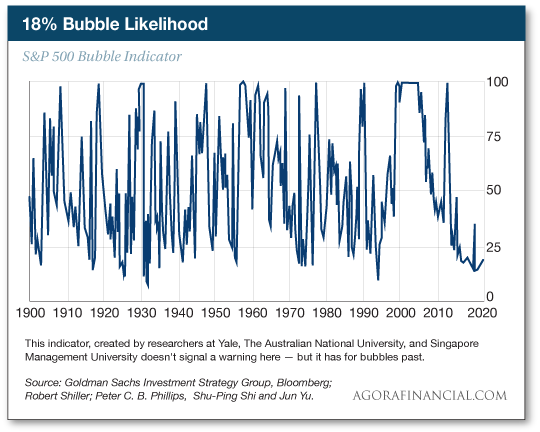 “How could the odds of a bubble be so low for stocks?” Jonas asks, anticipating your objection. “Turns out the ‘market context’ we’re in matters,” is his answer.

Yes, there were bumps along the way — three recessions of eight–10 months each between 1953–1961. But the point is that “the current market environment isn’t necessarily unsustainable,” says Jonas — “similar conditions in the mid-1950s sparked a market rally that lasted a decade and a half.”

Don’t get us wrong. Jonas is the first to acknowledge stocks are “a lot more expensive by most measures than they were five years ago.” But they can easily get more expensive — as they did when Greenspan spoke up in 1996 and 1999.

As for the recent correction? Hey, the Dow took a far bigger spill of nearly 20% during a scary six weeks in August-September 1998. But as pointed out last week, all those losses were recouped by Thanksgiving… and it was off to the races in 1999 and early 2000.

[Ed. note: Jonas’ proprietary trading platform has generated some monster winners since going “live” last summer — including seven money-doubling trades that played out in only weeks.

And you’re not stepping too far out there on the risk curve with these trades, either: The same strategy used in 2008 would have turned a profit during a year of sickening losses. Learn more about this all-weather strategy right here.]

If the stock market resumes its slide of earlier this month — yesterday we didn’t rule out the possibility of the S&P slipping from present levels near 2,650 down to 2,400 — blame could easily be laid at the feet of the Federal Reserve.

“U.S. stocks suffered 10% corrections in August 2015 and January 2016 and bounced back quickly both times,” Jim Rickards reminds us. “This time may be different.

“Stocks may have further to fall and may not bounce back so quickly, especially if the ‘Fed put’ does not materialize on March 21. That’s the date of the next FOMC meeting. As of now, the Fed is expected to raise rates. But if disorderly markets continue, the Fed could give the market a boost by not raising rates.

“Janet Yellen did this in September 2015 when she delayed the ‘liftoff’ in rate hikes to end a stock market correction. She did this again in March 2016 when she delayed a rate hike to help stop another stock market correction. That’s what professional investors mean by the ‘Fed put.’ The Fed is always there with a helping hand when markets head south.

“But the new Fed chair, Jay Powell, is unlikely to offer the Fed put, at least not yet. He will want to raise rates in March to show that he is not a pushover for market forces.”

This morning the trade in fed funds futures still points to a 78% likelihood of an increase. Hmmm…

The boom before the bust: A record number of small-business owners now say it’s a good time to expand, according to the latest Optimism Index from the National Federation of Independent Business.

The overall index jumped two points in January, to 106.9. But even more noteworthy is that 32% of survey respondents say it’s a good time to expand — a record in the 45-year history of the survey. “Small-business owners have never been more positive about the economy,” says NFIB chief Bill Dunkelberg, who cites “the new management in Washington tackling the biggest concerns of small-business owners — high taxes and regulations.”

Indeed, there’s been a sea change in the “single most important problem” part of the survey: For more than five years, a plurality of survey respondents cited either taxes or regulations as the biggest issue they face. But this month, the No. 1 category is “quality of labor” — finding good people to hire — cited by 22%.

The White House’s budget blueprint released yesterday has tanked the dollar anew — and given new life to gold.

As noted briefly in yesterday’s 5, the president’s 2019 budget proposal features a deficit of $984 billion. White House Budget Director Mick Mulvaney — who had a reputation as a budget “hawk” during his time in Congress — acknowledged the obvious: The Republican Party has abandoned even the pretense of trying to balance the budget 10 years down the road. The best he could summon was, “We do not have to have trillion-dollar deficits forever.” (How’s that Faustian bargain feel, Mr. M?)

For the record, the national debt blew out by another $200 billion during the three months the debt ceiling was back in place.

The debt ceiling came back into force on Dec. 8 — effectively freezing the national debt at $20.5 trillion. But of course, the spending never stopped; the Treasury just resorted to “extraordinary measures” like borrowing from government pension funds.

Now that the ceiling’s been suspended for another year under the budget deal signed into law last Friday, we can have an honest accounting — which the Treasury delivered this morning. The national debt now totals $20.7 trillion. Annualized, that works out to about $800 billion in new debt piled onto future generations.

“It has finally happened: The tea party is dead,” writes Matt Kibbe at Reason. He ought to know — he was one of the movement’s leading lights as president of the group FreedomWorks.

His pronunciation of death came even before the 2019 budget proposal released yesterday. The budget deal last week was the fatal blow: “Republicans, now controlling both the legislative and executive branches, jammed through a ‘CRomnibus’ spending bill that strips any last vestiges of spending restraint from the budget process.

“Gone are the tea party’s biggest and most hard-fought policy victory — mandatory caps in domestic and defense spending. The budget deal replaces them with $300 billion in new spending over the next two years, and, in all likelihood, sets a precedent for greater spending in the decade to come.”

We daresay Mr. Kibbe overestimates the movement’s accomplishments: The 2011 “sequester” merely slowed down the planned rate of spending increases. But in Washington, that’s considered a spending cut.

Cause of death, per Kibbe’s inquest? Politics.

“Inertia pulled us toward partisanship,” Kibbe writes, “and over time there was growing pressure to support the [Republican] party, not our principles.”

Heh… We remember another major tea party activist gushing over Rep. Paul Ryan as a “strong fiscal conservative” when he became Mitt Romney’s running mate in 2012. We were a lonely voice calling out Ryan as an enormous phony that summer. We caught no shortage of grief from true-believer readers who didn’t want to hear about it.

Of course, by the time Ryan ascended to House speaker in late 2015, everyone had come around to our point of view. The Drudge Report was routinely plastered with unflattering pictures of Ryan grimacing as if he had severe indigestion (often alongside Barack Obama looking like the cat that ate the canary).

Oh, well. It’s not as if now is the first time the Republican Party sold fiscal conservatives down the river while holding the levers of power. Bush the Younger doubled the national debt with the Iraq war and Medicare Part D. Reagan nearly tripled it during his two terms, despite raising taxes 11 times.

But enough of us rambling. We want to know what you think now that a tea party activist has pronounced the death of his own movement and even the alleged “hawks” in D.C. like Mick Mulvaney have been co-opted. Are you worried about Uncle Sam’s rising level of debt? If you are, what are the consequences you fear? If not, why not?

P.S. It’s not only events in D.C. that are making debt and deficit top of mind around here these days. In another six months, it’ll be 10 years since the release of our executive publisher Addison Wiggin’s debt documentary I.O.U.S.A.

We see that the “protagonist” of the film — David Walker, who at the time was comptroller general of the United States — is running for governor of Connecticut.

Considering how the state’s pensions are pitifully underfunded and its deficit is running near 12% of total annual tax revenue… the man sounds like a glutton for punishment.