You think the stock market’s been a roller coaster the last three weeks? It’s nothing compared with the cryptocurrency markets.

Here’s a chart of bitcoin dating back to — just for the heck of it — the stock market’s peak on Friday, Jan. 26. 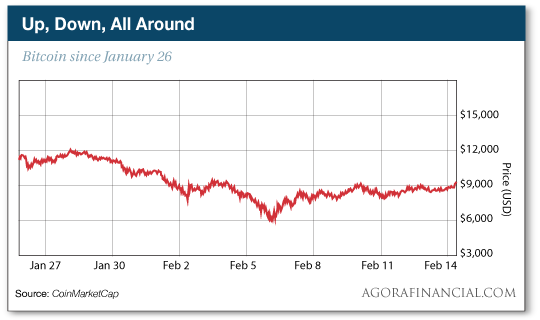 The volatility in crypto is an inevitable spillover from volatility in more conventional markets, says Andrew Keene — one of the newest contributors here at Agora Financial.

“These massive moves lower had a large effect on investor sentiment in crypto markets. We saw some big moves lower from a number of key cryptos. Some coins held up better than others, but the sell-off in this market was broad.”

We should give Mr. Keene a proper introduction. He spent a decade in the Chicago options pits, often literally rubbing shoulders with our own Alan Knuckman.

During that time, Andrew perfected a trading style that parlayed $50,000 into more than $5.5 million. He got some media notoriety — especially for his accurate forecast that Amazon stock would shoot to $1,000 at a time it was only $600. And he earned a nickname among his fellow trading pros — the “Alpha Shark.” 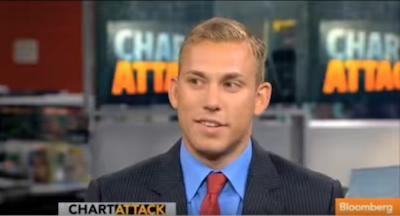 The nickname is hard-won. Over the years, Andrew developed proprietary market indicators that methodically seek out opportunities like a cold-blooded mako shark. (OK, the mako shark is partially warm-blooded, but just play along with us here.)

Andrew is willing to trade any asset class as long as it can generate alpha — returns that beat the market. That includes cryptocurrencies.

“The last trading week of January changed the dynamics of most equity and crypto markets,” says Andrew.

“While many analysts think that the two aren’t really related, the moves over the past three weeks show us how untrue that is. Broad sell-offs in the equity market have a serious impact on the sentiment of investors in all markets. Large moves lower in equities can also put pressure on profitable crypto traders to take money out of the market.

“After the unprecedented run crypto markets saw in 2017, it makes sense that we have seen this pullback. But pullbacks can be thought of as opportunities. A number of crypto names will be testing old levels of support. These levels could signal good entry points.”

How will he know? It comes back to those proprietary market indicators we mentioned earlier. He has one called the “CryptoCloud.” The simplest way to illustrate it is like so…

CryptoCloud trades have the potential to take a $1,000 grubstake and turn it into $39,570… in the space of three months. And that performance is repeatable.

Andrew shows you how it works when you follow this link. Please note: Once you see the time-sensitive nature of this information, you’ll understand why it’s coming offline at midnight this Saturday.

To the more conventional markets, where a new freakout over inflation has proven a flash in the pan.

As you might recall, the big sell-off began on Friday, Feb. 2, when the monthly unemployment numbers showed evidence of wage inflation. The narrative quickly took hold: Inflation is making a comeback. The Federal Reserve will act to nip it in the bud, raising interest rates and tightening the monetary spigots even more than it is already. That will choke off economic growth and tank the market.

Fast-forward to today and the Bureau of Labor Statistics is regaling us with the consumer price index. It jumped way more than expected — 0.5% for January, higher than even the highest estimate among dozens of economists polled by Bloomberg. Year over year, inflation is officially running 2.1%. The dreaded “wage-price spiral” now stalks the land.

Sure enough, stock futures fell hard when the numbers came out this morning… and then a funny thing happened.

And that’s despite Treasury rates moving back up: The 10-year is now 2.88%, at the high end of its trading range since this whole inflation scare got started.

If the Fed is about to tighten policy further, the gold market isn’t sensing it. The Midas metal has pushed above $1,330.

The inflation narrative never made much sense, really.

Here’s why it doesn’t add up in Zach’s mind: “The higher wages are a direct result of stronger business metrics here in the United States. A lower tax rate for corporations coupled with an expanding economy has led companies to pay more to attract quality employees. Incidentally, more and more companies are making announcements of higher minimum wage as a direct result of the tax cuts kicking in this year.

“Higher wages may be a small drag on profits for companies. But that drag pales in comparison to the bright spots of a drastic cut in taxes and strong growth in so many different industries. Investors essentially took this one minor speed bump and decided that this was going to be a deal killer for the entire bull market.

“Fortunately, when you look at the full situation, this is actually a very strong environment for American businesses and for investors. It just takes a bit of fortitude to hold to your valuable investments or to add more capital to this ‘on sale’ market.”

Some Americans might have gotten a bonus or a pay raise last month… but they sure didn’t go out and spend it.

The Commerce Department informs us retail sales slipped 0.3% last month. Here again, the “expert consensus” was confounded: Among dozens of economists polled by Bloomberg, the most-pessimistic guess was for a flat number.

Worse, the December numbers were revised downward. All of a sudden a “solid” holiday shopping season has turned into only a “so-so” one, in the estimation of Econoday. (That’s going to leave a mark on the fourth-quarter GDP numbers, which were already a disappointment for a White House hoping to crow about consistent 3% economic growth.)

The February retail sales numbers, due a month from now, ought to be really interesting: Most wage-earners’ paychecks are higher this month, thanks to adjusted withholding under the new tax law. Will they go out and spend it?

We concede the weak numbers are a bit puzzling in light of growing evidence that Americans are going deeper into hock: Only yesterday, the Federal Reserve reported that credit card borrowing grew 3.2% last quarter — the second-largest increase since 2007. Hmmm…

At the risk of reigniting the “Oxford comma” debate among our readership, we note that the lack of such a comma will result in a $5 million settlement for some truck drivers in Maine.

A while back, the drivers sued their employer, Oakhurst Dairy — demanding overtime pay. Oakhurst said the workers were exempt under Maine labor law.

At issue was this passage in the law, laying out what activities are exempt from overtime: “The canning, processing, preserving, freezing, drying, marketing, storing, packing for shipment or distribution of:

Note there’s no comma after the word “shipment.”

Last year, a judge ruled the absence of the comma rendered the statute unclear. Is “packing for shipment or distribution” a single task… or two separate ones? The drivers said it was a single task and that because they do no packing, they’re entitled to overtime.

Rather than let the case drag on indefinitely, Oakhurst agreed to the $5 million settlement last week. The state, meanwhile, has rewritten the statute: The comma confusion has been expunged with some well-placed semicolons.

“The pols in D.C. will never rein in their spending habit because that equates to power,” reads the first of several responses to our musings yesterday about runaway federal spending and the demise of the tea party movement.

“The Framers of the Constitution gave us an Article 5 convention of states to amend the Constitution without any input or interference from the president, Congress or the courts. The movement now has 12 States signed on with many more considering this year. The amendments envisioned will rein in the scope and power of the federal government by limiting spending and taxation, limiting congressmen’s and judges’ terms, balancing the budget and giving the states final say over controversial court decisions and executive orders.

“The states created the federal government monster, and it’s their duty to control it. The Convention of States Project is carrying this ball. Let’s stop complaining and do something about the monster.”

The 5: Careful what you wish for. What guarantee do you have that the state lawmakers won’t exceed their mandate and start rewriting other parts of the Constitution?

The bizarre thing is that at one time it was conservatives who feared that a constitutional convention or “con con” would open up a Pandora’s box. Now it’s conservatives leading the charge…

“I believe Trump is taking a page from an old Republican playbook,” writes another.

“He will attempt to raise deficits until some form of economic crisis develops from the resulting increased interest rates. At that point, he will be allowed to reduce entitlement spending to solve the crisis. ‘Never let a crisis go to waste,’ right? Your thoughts?”

Yes, there’s a school of thought that says tax cuts have the effect of “starving the beast.” Except it never works out that way.

Researchers at Berkeley studied the Reagan and Bush 43 tax cuts in 2009 and concluded, “Following long-run tax cuts, government spending does not fall. Indeed, if anything, spending rises.”

“Trump said, I’ll cut the deficit if you give me more Republicans in Congress,” says our final correspondent, referring to a recent presidential tweet.

“Can’t I hope that we will do our part and he will do his?”

The 5: Yeah, and Charlie Brown can hope Lucy won’t pull away the football next time.

C’mon, really? Don’t you understand how it works in Washington?

We noticed this week the latest White House budget blueprint wipes out the Corporation for Public Broadcasting and the National Endowment for the Arts. So did last year’s. Republican presidents going back to Reagan have proposed it.

And it never happens, even when Republicans have majorities in Congress. You know why? Because Republicans need whipping boys with which to rile up their base. If the CPB and NEA didn’t exist, what would they complain about in their fundraising letters?

P.S. Have you seen this message from our customer care director? It could make a dramatic difference to your retirement… and it won’t take long to watch.