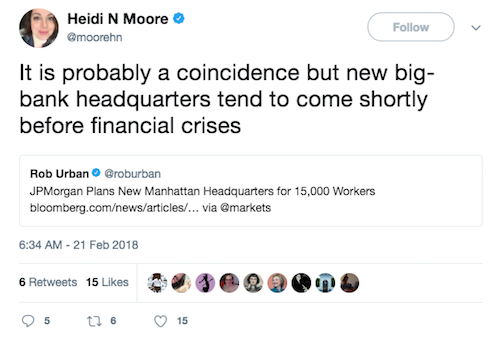 JPMorgan Chase announced this morning it plans to tear down its current headquarters building at 270 Park Ave. in New York — built in the 1950s for about 3,500 employees. Construction begins next year on a new building at the same site that can house 15,000 workers.

More than one observer on Twitter points out JPM already has a perfectly fine building, less than 20 years old, a three-minute walk away at 383 Madison Ave.

It was built for the investment bank Bear Stearns at the peak of the dot-com bubble in 2000–2001. Which, come to think of it, sort of reinforces the point about bank HQs and financial crises.

As you might recall, Bear Stearns failed in March 2008 — one of the biggest tremors preceding the financial earthquake that followed in the autumn. JPM acquired the husk of the company on a Sunday for $1.2 billion. Only two days earlier, Bear was trading at a market cap of $18 billion.

In other words, JPM acquired a spiffy skyscraper at the market price and all of Bear’s other assets for free. Sweet deal, huh? 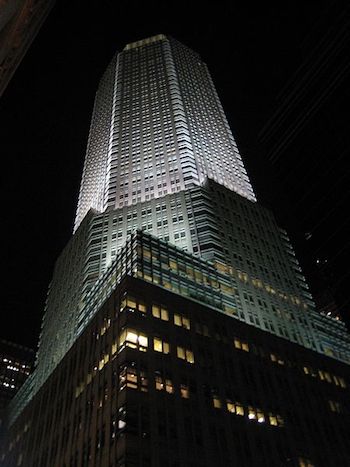 We’ve already been thinking about Bear’s demise with the 10th anniversary coming up next month.

The prelude to the collapse furnished no shortage of quality entertainment in those early days of The 5 Min. Forecast — like the reports that CEO Jimmy Cayne was essentially AWOL during the summer of 2007 as a Bear Stearns hedge fund collapsed under the weight of subprime mortgages gone bad. Cayne, according to The Wall Street Journal, was busy competing in a bridge tournament, playing golf and smoking dope — and unreachable by cellphone or laptop.

“Cayne denies it all,” our executive publisher Addison Wiggin reported here in The 5. “At least what he can remember of it.”

Cayne was cashiered in January 2008 — a couple of months before the end.

But that wasn’t the end of the fun. Not by a long shot.

On Wednesday, March 12, 2008, Cayne’s successor Alan Schwartz went on CNBC, trying without success to assure the world Bear was not on the verge of going under.

Move along, nothing to see here…

Recalled a veteran Wall Street trader to Vanity Fair later that year, “You knew right at that moment that Bear Stearns was dead.”

Bear collapsed the following weekend and the fire sale to JPM was consummated.

“This is what I call ‘Hot Money,’” says Joshua.

“Hot Money is when someone is risking all or nothing that a stock will either skyrocket higher or sink lower. Hot Money trading happens every day in the stock market. If you know how to spot it, the opportunity to generate huge profits is endless.”

Also in 2008, Joshua used his same “Hot Money” system to instruct his clients to buy Lehman Bros. put option contracts. They closed out for 2,200% gains.

But don’t get the idea this is only a bear-market strategy. “Hot Money” can bet on a move up or down — all that matters is that the move is big.

“They are able to make directional bets with massive payoffs using limited capital. These bets are placed without tipping off stock investors that a massive move is about to occur.

“Using my prior floor trading experience from the Chicago Mercantile Exchange, I’ve developed a proprietary approach that scans millions of options orders on all 16 option market exchanges to find ‘Hot Money’ trades like those and be able to profit from them in real-time.”

We’ll tell you more about Joshua’s unorthodox background before the end of the week. (Sneak peek: It begins with delivering pizzas.) But right now you should know that he’s debuting his “Hot Money” system for everyday folks like you — with the potential for gains as big as $39,000 in eight days — during a special online training event this coming Monday, Feb. 26.

Access to this training session is free. Just sign up in advance at this link to guarantee your spot.

To the markets… where the major indexes have recovered some but not all of yesterday’s steep losses. At last check the Dow has reclaimed the 25,000 level.

The big economic number of the day is existing home sales — down 3.2% last month. We’re looking at the lowest pace of January turnover since 1999. But that’s still largely a function of tight supply, and as we mentioned last week, the homebuilders are finally ramping up production of new stock in a meaningful way.

To no small extent, markets are in suspended animation awaiting the release of minutes from the last Federal Reserve meeting three weeks ago. That will occur around the time this episode of The 5 hits your inbox.

As a reminder, Fed “minutes” aren’t like the minutes of your local sewer board. They’re not an objective record of who said what. They’re a political document crafted to telegraph a message to the markets. This one will be especially interesting because the meeting took place on Jan. 31 — two days before the stock market started going seriously south. We assure you that whatever goes into the document will, however subtly, account for events that have taken place since the meeting. Heh…

For the record, the Central Bank of Russia is out with its monthly gold reserve figures. The Russians keep stacking — to the tune of another 18.66 metric tons last month. Russia’s total gold stash is up to 1,857 metric tons. Translated to ounces, that’s just shy of 60 million… 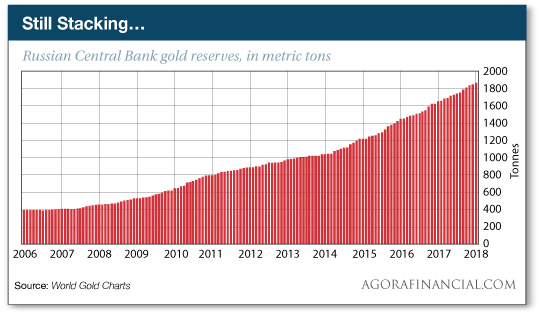 Russia’s gold stash is now more than 5.6% of GDP — a percentage three times that of the United States.

“Russia is the world champion when it comes to the gold-to-GDP ratio,” Jim Rickards told his readers earlier this month. “That’s the metric that really matters because it reveals how much gold you have to back up your real economy in the event of a loss of confidence in fiat currency.”

Jim’s sticking to his outlook shared here in December: Saudi Arabia and Russia are keen to keep a cap on crude around $60 — high enough to generate respectable revenue for their governments, low enough to discourage U.S. frackers from ramping up production and flooding the global market.

Since then, the situation has become “more dangerous for everyone,” says Jim. “Russia and Saudi Arabia both need as much oil revenue as they can grab. But the frackers have done a great job at lowering their costs of production. Frackers who produced in the $70–130/barrel range in 2014 now produce in the $30–40/barrel range…

“The result now is an oil global glut with no end in sight. The frackers are eating OPEC’s lunch. That won’t last. OPEC (really Russia and Saudi Arabia) will retaliate by opening the spigots again to take market share from the frackers. But this time the breakeven point won’t be $60/barrel; it will be more like $40/barrel… Get ready for lower oil prices.”

Valentine’s Day was a week ago… but it’s not too late to find the love of your life. And now you can do it safely and securely using blockchain technology.

Our technology sleuth Ray Blanco reports 40% of Americans use online dating apps such as OkCupid, Match and eHarmony (not to mention the hook-up app Tinder). And Cupid’s cyber-arrow has hit the mark for 20% of dating-app users who find themselves in committed relationships as a result.

“But the experience could certainly be improved with more trust and security,” says Ray. “You never know who you are really talking to on the other end, and many daters lie in their profiles.

“That’s where blockchain can come in, bringing a higher level of trust for those looking for a mate,” Ray says.

A new blockchain app launched its initial coin offering (ICO) on Valentine’s Day… of course. The app — improbably named Hicky — promises to ensure that “people are verified and personal data is safe,” per the company’s website. “Matching occurs based on predefined filters and attributes ensuring that matches are highly relevant.”

In addition to secure and “relevant” matches, the app plans to incentivize good behavior for app users “via the token economy.”

And that’s where the ICO comes in: Members who behave will be rewarded in hicky tokens; those who transgress will have to cough up their digital coins.

The hicky coin (HKY) is on sale now… at a 10% discount for a limited time.

But if you’re thinking of dipping a toe in the crypto market — or the cyber-dating pool, for that matter — this might not be the place to start…

“Speaking of volatility, I remember the end of the dot-com boom,” a reader writes after we shared some interesting charts yesterday.

“Toward the end, but before the fall, it was nothing for the Dow to go up or down 300 points, which would be 600 or 700 with the market where it is today.

“I made a 100% annual gain two years running in those heady days… but lost most of it in the crash from heavy margin use when it seemed so easy to make money.”

The 5: Leverage — it’ll kill you every time. Sounds as if you learned your lesson, though. Alas, there’s a whole generation coming up behind you likewise destined to learn it the hard way…

“Little minds have little answers,” writes a reader. “Why is it always how high tax rates must go to balance the budget?

“How about how much wasteful spending needs to be cut to bring spending into balance with revenues? A novel thought.”

The 5: Near as we can tell, the reader is keying in on a remark in yesterday’s mailbag: “Another wake-up call,” a fellow reader wrote, “might be a projection of what income tax levels would be required to achieve a balanced budget as the debt rises.”

We didn’t read that as advocacy of tax increases, but who knows…

“I wonder if your readers realize something scary,” reads our next entry: “Washington doesn’t care, they’re not going to fix the debt problem.

Republicans love to give lip service to “fiscal responsibility” when Democrats hold power. Then they go on a spending spree when it’s their turn to take the wheel — i.e., another $300 billion over the next two years that was passed into law earlier this month.

And they’re not the ones who will face the consequences. We are…

P.S. As we write, Zach Scheidt’s “Extreme Income Summit” is in progress. Readers are learning how to harness the “new era of volatility” in the markets to generate hundreds of dollars in investment income week after week.

You say you missed it? You can watch a replay right here.