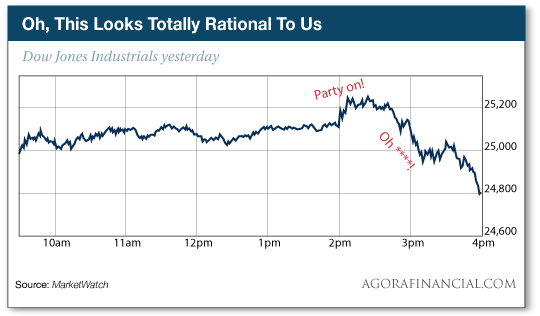 When we left you yesterday, we were anticipating the release of minutes from the Federal Reserve’s most recent meeting on Jan. 31. They came out at 2:00 p.m. EST. The gist was that some Fed pooh-bahs believe economic growth is accelerating at a faster pace than when they last met six weeks earlier. By 2:30, the Dow was up 300 points on the day.

Then traders started fretting about the flip side: Stronger growth means the Fed might pursue interest rate increases more aggressively than they have till now — maybe bumping up the fed funds rate four times this year instead of three.

Those jitters turned up first in the Treasury market — pushing up the rate on the 10-year note within spitting distance of 3%. That’s territory last seen, and only briefly, more than four years ago.

With that, round-number psychology came into play. A 3% yield on the 10-year? That means higher borrowing costs for corporate America. Sell stocks! The Dow surrendered more than 400 points in less than 90 minutes.

The reaction in gold was equally sensible and level-headed… 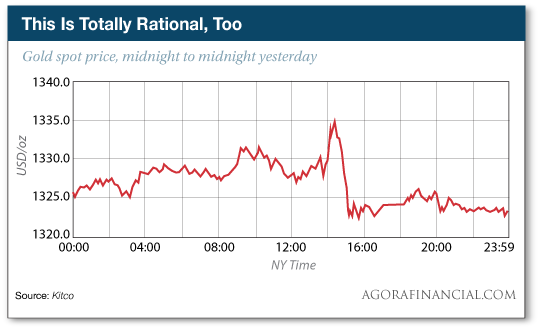 And as we write this morning, it’s as if none of it ever happened.

Still, there is something going on at the Federal Reserve these days that merits attention. You won’t hear about it from the mainstream, though…

“The most important financial story I have read in a long time went completely unnoticed,” Jim Rickards says.

“Sometimes the most important news is buried so deep it’s not even news,” he continues.

To wit, Jim highlights a post on the website for Johns Hopkins University’s Center for Financial Economics (CFE). The brief paragraph — written by Jon Faust — says, “I recently started a part-time post as adviser to Fed Chair Jay Powell.”

Jim anticipates your questions: “Who’s Jon Faust, and why should we care if he’s advising the Fed?”

“Faust is an ‘insider’s insider’ at the Fed,” Jim contends. “He’s the most powerful monetary expert that no one has ever heard of.

“Faust served as special adviser to the Fed Board of Governors from 2012–2014 under Ben Bernanke and Janet Yellen.”

While special adviser at the Fed, “Bernanke relied on Faust to manage market expectations (some might say ‘manipulate’ expectations) through various communications channels.

“These channels include Fed statements, speeches by Fed governors, planted questions at press conferences, leaks to favored reporters… and exquisite word choices such as ‘patient’ to describe future Fed policy on rate hikes, all under the banner of ‘forward guidance.’

“In order to carry out his communications duties,” says Jim, “Faust had to be intimately involved with the creation of monetary policy itself.” In fact, during his tenure at the Fed, Faust was part of the inner circle… situated in an office next-door to Bernanke’s and Yellen’s.

If egghead economists like Bernanke and Yellen relied on Faust’s guidance, noneconomist Powell — he’s a lawyer and investment banker — will lean on Faust even more.

According to Jim, Faust’s return to the Fed “signals continuity in policy.”

“The return of Jon Faust means continuity with the policies of Bernanke and Yellen. This means ‘gradual’ tightening of monetary policy, defined as 0.25% rate hikes every March, June, September and December until early 2020 unless one of several factors causes the Fed to take a ‘pause,’” Jim continues. “Those pause factors are job losses, disinflation or disorderly market declines.”

For Jim, business as usual at the Fed means “the highly refined Fed forecasting models we have developed since 2013 will be valid for the foreseeable future.

“Jon Faust’s return to the Fed will make sure of that.”

It’s a model Jim developed 15 years ago in conjunction with the CIA. Only recently has he been able to take the wraps off for retail investors. Still, it’s highly sensitive information, and for that reason we’re compelled to take it offline at midnight tonight. Check it out while you still can.]

From Germany comes affirmation of a Jim Rickards forecast that would throw global markets into a frenzy if it pans out — a preventive U.S. attack on North Korea.

The 54th annual Munich Security Conference took place last week. Think of this event as a United Nations where politicians and “policymakers” speak a little more freely than they would at the U.N.

Among those in attendance this year: Sen. Jim Risch (R-Idaho), who’s in line to become chairman of the Senate Foreign Relations Committee next year.

On Sunday, Risch said both he and the committee’s top Democrat, New Hampshire’s Jeanne Shaheen — she was sitting next to him in Munich — had “drilled down with the administration” on its North Korea policy.

Their takeaway? President Trump is prepared to start a “very, very brief” war with North Korea — an event Risch said would be “one of the worst catastrophic events in the history of our civilization… The end of it is going to see mass casualties the likes of which the planet has never seen. It will be of biblical proportions.”

At least Sen. Risch seems to be taking the consequences more seriously than his forever hawkish colleague Lindsey Graham (R-South Carolina). Last year Graham callously observed, “It would be terrible, but the war would be over [there], wouldn’t be here.”

If Risch is to be taken at his word, the Trump administration — as Jim has been telling us for months — is determined to prevent Kim Jong Un’s regime from developing the capacity to launch a nuclear warhead atop an intercontinental ballistic missile at the United States. (How close Kim is to achieving this capacity is a matter of some debate.)

And if it means losing half of Seoul to North Korean artillery and a quarter of Tokyo to North Korean rockets… well, that’s a price the administration is willing to have the South Koreans and Japanese pay, evidently. Wouldn’t do much for Washington’s reputation as an ally and protector, though…

A defensive investment plan, you wonder? Gold is the ultimate crisis hedge…

Just when it seemed as if Dylan Ratigan was going to make a positive difference in the world, he’s about to blow it all by entering politics.

Ratigan is still best known in financial circles for an epic rant on his MSNBC show in August 2011. We took note of it here in The 5. “We’ve got a real problem!” he shouted. “This is a mathematical fact! Tens of trillions of dollars are being extracted from the United States of America… An entire integrated system — financial system, trading system, taxing system — that was created by both parties over a period of two decades is at work on our entire country right now.”

A transcript doesn’t do it justice. You have to watch. (Get a load of the support staff’s worried faces in the background. Heh…) 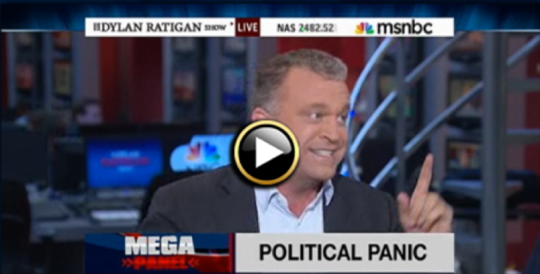 We still aren’t altogether sure what he meant, but we remain vaguely sympathetic. “Extraction” is a splendid word that could apply to anything from Wall Street bailout culture to the health care cartel.

Less than a year later, Ratigan walked away from the cable news grind. By 2013, he’d taken up a hydroponic farming venture in San Diego that aimed to employ veterans of the Afghanistan and Iraq wars.

When last we checked in on him — it was 2016, and the fifth anniversary of the extraction rant — he won our sympathy again, singing the praises of decentralized systems: “Whether it’s electricity production or whether it’s actually the banking system, any aspect of our lives is now in the process of decentralization, which is incredibly empowering for us… And that is why you are seeing such a desperate political culture in America right now. As they cling to their ideology of centralized power in the face of sand slipping through their fingers as we transition to a decentralized world.” (Wonder what he thinks of cryptocurrencies.)

How he thinks he’ll make a difference in Washington, we haven’t the faintest idea… but yesterday he returned to his native upstate New York to announce a run for Congress. It’ll be an uphill climb. Even if he defeats eight opponents in the Democratic primary, he faces a Republican incumbent in a safe GOP district. But hey, it might provide some entertainment along the way…

To the mailbag, and back to the Fed: “If things get tense in the near term economically, and the Fed needed to, what would be the result of the Federal Reserve choosing to raise rates, say, more than a quarter point, go for half a point, or a full point, instead of four consecutive quarter-point hikes?”

The 5: That’s not unprecedented. Under Alan Greenspan, the Fed doubled the fed funds rate in just over a year starting in early 1994. It’s the one time in postwar history that a Fed rate-raising cycle didn’t ultimately touch off a recession.

But unless inflation accelerates suddenly from its current leisurely stroll into a full-on gallop… we’re hard-pressed to see how that would happen now.

“The Federal Reserve is going to let markets crumble in 2018,” another reader suggests.

“Fed officials (none of whom is elected by the people) plan to continue cutting off stimulus measures, and I believe that anyone with any sense can see the narrative that is building here. They are going to continue raising interest rates and reducing their balance sheet faster than originally expected. They will not step in when equities crash further. The Fed officials have set up President Trump as the perfect scapegoat for a market bubble implosion that had to happen eventually anyway.”

The 5: You don’t think the “Plunge Protection Team” will step in?

Well, that’s the conclusion of an ideologically diverse bunch including Reagan Treasury official Paul Craig Roberts and “modern monetary theory” economist Michael Hudson. “It appears,” they write, “that in May 2010, August 2015, January/February 2016 and currently in February 2018 the Fed is rigging the stock market by purchasing S&P equity index futures in order to arrest stock market declines.”

We’re not asserting that’s the case. We’re just saying there are competing conspiratorial narratives out there!