We introduced Joshua Belanger — a new contributor here at Agora Financial — on Wednesday. We promised to revisit his backstory, including a long stint delivering pizzas… and living paycheck to paycheck.

A couple doors down from the pizza shop where Joshua worked was an Edward Jones office — and folks there ordered a lot of pizza!

“One day,” Joshua says, “I went inside and asked one of the employees near the front desk, ‘How do I become a stockbroker?’

“He said I needed a Series 7 industry license and a book of business. He also recommended that I get on the floor of the Chicago Mercantile Exchange.

“With no connections or formal education, I cold called every firm at the Chicago Mercantile Exchange and begged them for an opportunity to get my foot in the door.”

You gotta admire that kind of grit: “Eventually – after painstaking patience – it paid off,” Joshua says.

He got a job as a runner at the CME for a whopping $5.75 per hour; he couldn’t quit the pizza-delivery gig just yet.

But Joshua paid his dues, rose through the ranks and became a stockbroker and money manager.

In time, Joshua became disillusioned: “I quickly learned that what I was doing wasn’t actually finance or money management. Instead, I became a well-paid, glorified salesman whose goal was to push products to make the firm more money.”

“It was all about the firm making money… not our clients,” Joshua adds.

“I had to meet quotas on new account openings. Taking care of the ones I already had was not a part of my compensation.

“When I gave my seniors ideas on options strategies,” Joshua continues, “they ignored me because options were ‘too complicated.’

“I knew darn well that options could help my clients with generating better returns and limiting risk.”

Joshua persevered: “I knew there was more to ‘options success’ than what I learned studying for my Series 7.

Joshua picked up a thing or two from savvy traders on the CME floor: “The most successful traders only traded when the large orders would come into the pit from the big players like Goldman Sachs and Merrill Lynch.

“I mimicked a pro trader’s moves. Sure, I fumbled along the way but I knew I was onto something,” Joshua continues.

That certain something turned into a tried-and-true strategy he calls “Hot Money.”

Joshua explains: “‘Hot Money’ is when someone risks all or nothing that a stock will either skyrocket higher or sink lower.

“This type of trading happens every day in the stock market,” he continues. “If you know how to spot it, it gives you the opportunity to profit alongside these big bets.”

Take, for example, the S&P 500 over the last few weeks; Joshua sees its volatility as an opportunity.

“I detected strong interest in S&P 500 (SPX) put options. Put options are a ‘bet’ that the price of a stock — or index in this case — is set to go down.

“We wouldn’t be seeing this action unless someone expected this trend to continue.

“The ‘Hot Money’ action indicated that investors think the market will sink 59% from where it is today.”

“First off, a 50% correction would be a black swan. Something we are unlikely to see.”

Joshua believes there is only a 1% likelihood the market will take such a nose dive in the next 29 days.

But institutional investors are protecting their positions from a “flash crash.” Joshua says, “The current options activity shows me traders… are actively pursuing hedges to cushion the blow if the market freezes up.”

In that event, an options bet could make up for losses more than 50-fold.

“Volatility might sound scary, but it isn’t. It’s actually very good news for us as traders…

On Jan. 30, Joshua’s proprietary “Hot Money Tracker” signaled “an unusual bearish bet being placed in the March $4 put options with someone risking $226,000.

“In just one week! That’s the power of ‘Hot Money’ in action.”

[Editor’s note: Mark your calendar — this coming Monday at 1:00 p.m. EDT. That’s when Joshua will reveal, in depth, how you can profit from “Hot Money.”

It’s your chance to level the playing field with Wall Street… and profit from the same trades that insiders have been cashing in on for years. On Monday, Josh debuts his “Hot Money Tracker” to the world. Click here to secure your spot to this FREE training event.]

The Dow is in the green on this Friday morning… but likely to notch a weekly loss.

As for stocks, “we’re waiting to see how this week’s chop resolves,” says our Greg Guenthner. “The S&P has stuck just below its 50-day moving average all week: 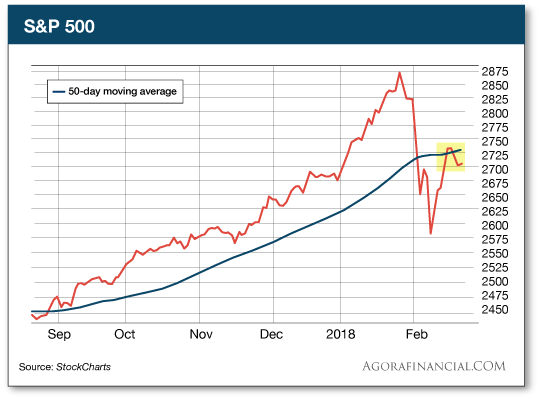 “We could see some more chop before the major averages decide if they’re going to make a run at their January highs — or continue with their February pullback.”

Among the objects of trader chatter today is Snap Inc., maker of the Snapchat app… presumably because of this… 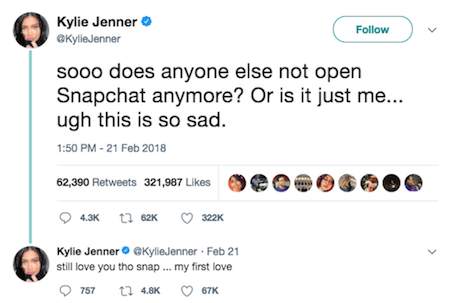 That was after the close on Wednesday. SNAP is down 6.7% since.

When a member of the Kardashian clan can sink your company’s market cap by $1.3 billion… you just might want to examine the sustainability of your business model. Heh…

Uncle Sam’s finances are even more parlous than you thought.

Imagine the total value of your home equity and retirement accounts is $350,000. Then imagine your mortgage, auto loans, credit card debts and so on total $2.39 million. Hopeless, right?

Add seven zeroes onto the end of each of those figures… and that’s your federal government for you.

“Although this last amount is similar in size to the national debt, net worth is conceptually different,” writes Marc Joffe of the Reason Foundation. “Federal audited financial statements use accrual accounting, which means that obligations are recognized as they are incurred. For example, the $23.9 trillion in liabilities includes $7.7 trillion in veterans benefits and retirement benefits earned by federal civilian employees. Another $200 trillion in liabilities arise from various guarantees the government has made, including its commitment to backstop private pension plans — many of which are becoming insolvent.”

And those liabilities don’t even include $49 trillion in future Social Security and Medicare payouts!

From where we sit, the most staggering thing is how few assets the feds actually have. $3.5 trillion in assets are dwarfed by liabilities 6.7 times larger.

We recall when the late investment newsletter guru Harry Browne was running for president on the Libertarian ticket in 1996 and 2000. One of his major proposals was to retire the national debt by selling off federal lands and such. At the time, it seemed doable. Now? Not so much.

Back to the report: As happens every year, the Government Accountability Office refused to sign off on large portions of it because the numbers are so sketchy. The GAO cites “material weaknesses in internal control over financial reporting and other limitations affecting the reliability of these financial statements.” Surprise, surprise, the Pentagon is a standout offender.

“It is unfortunate,” writes Mr. Joffe, “that each year’s federal financial statements do not receive more attention. Any company reporting results like those the government reported last week would face liquidation.”

Of course, companies can’t print money and the feds can. But for how long? “If the bleeding doesn’t stop,” he goes on, “we should expect investors in Treasury securities to demand higher rates as the perceived risk of not being paid on time, in full and with uninflated dollars, increases… At some point, the nation could face a sovereign debt crisis with serious global consequences.”

“The annual budget deficit will continue to climb,” a reader weighs in.

“I don’t believe those in Washington who want to keep their jobs, which pretty much includes everyone, can risk balancing the annual budget or even consider the prospect of running a surplus.

“The ‘Greenspan put’ is also here to stay, so the S&P will undoubtedly go higher. If unaltered market price discovery is allowed to happen, the net result will be the destruction of many pension plans, IRAs and the life savings of most private citizens in the USA. This is what would have happened in 2009 if the federal government had not intervened.

“What would America have looked like if they didn’t ‘print’ to solve the problems? Many of the soon-to-be retirees would have been made paupers overnight, completely dependent on government sources for survival. All of this would have happened just as the ‘baby boomers’ were starting to enter retirement, creating a nightmare for policymakers if the market were left to its own fate. How many pension funds would have been unable to fulfill their obligations, including many state and local plans? They pulled the proverbial rabbit out of the hat last time, but do they have another one hiding inside they can pull out the next time?”

The 5: We would question your interpretation of 2009. After World War I wound down, the economy sank into a depression in 1920–21. President Harding and Congress cut the federal budget nearly in half and slashed income taxes at all income levels. The national debt fell by one-third. The Federal Reserve, for its part, sat on its hands, letting the money-supply chips fall where they may.

The problem next time, as Jim Rickards has said time and again, is that the Fed has no capacity to blow up its balance sheet bigger than it is already. The only solvent institution left standing will be the International Monetary Fund with its “special drawing rights” — which it will print unto infinity.

P.S. We forgot to mention that trade that made the aforementioned Joshua Belanger something of a legend in the trading world.

It was Dec. 4, 2009. Joshua’s “Hot Money” tracking system uncovered a multimillion-dollar bet on a small New York bank. Not long after, you could have booked an astonishing 35,722% gain just by following the “Hot Money” hotshots.

Joshua pulls back the curtain on how “Hot Money” flows… and how you can capture a piece of it for yourself… during a special live training session just three days from now. It’s Monday at 1:00 p.m. EST.

Access is FREE… but we expect intense demand, so we ask that you sign up in advance. We want to make sure we set aside enough server capacity to accommodate everyone. Here’s the signup link.