The End of Health Care as We Know It

Confession: We somehow overlooked the single most horrifying thing about the two-year, $300 billion spending binge that Congress and the president began a few weeks ago.

We should back up a bit: For years we’ve been gravely concerned about the rising cost of health care. And we still are, judging by the latest report from the actuaries at the Centers for Medicare and Medicaid Services.

The report, issued two weeks ago, finds that by the year 2026…

Our concern today is the federal government’s share. Check out this chart showing the percentage of the federal budget devoted to health care… 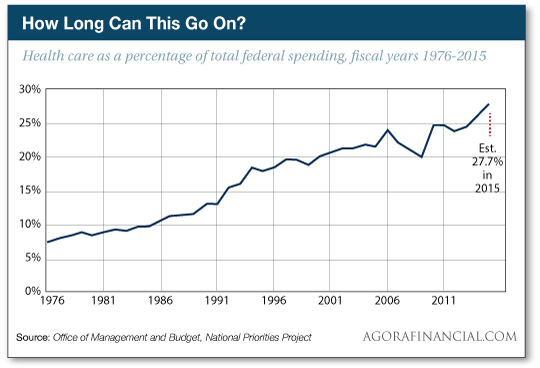 Back in 2011, Agora Financial executive publisher and 5 Min. Forecast founder Addison Wiggin noticed this doubling every 20 years. “Assuming you’re 55 now,” he wrote, “health care spending will eat up half the federal budget by the time you’re 75.

“Now,” he continued, “looking at a pie chart of the current federal budget, what categories do you think will have to give way to make room for all that health care spending? 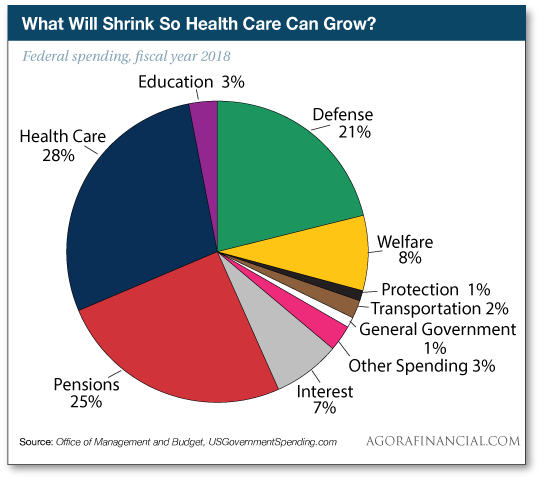 “If you haven’t already figured it out,” said Addison, “that’s a trick question. Something in the system is going to break long before health care spending eats up half the federal budget.”

Which brings us to the one good thing that came out of Obamacare.

“The provision garnered almost no attention from the mainstream media or even from most conservative commentators,” write John Goodman and Thomas Saving at Forbes. “Yet according to the Medicare Trustees report that followed, this one provision eliminated $52 trillion of unfunded federal government liability — an amount that was more than three times the size of the U.S. economy.”

This one thing is a cap on Medicare spending. It put the brakes on the growth in Uncle Sam’s staggering future obligations. You can see the difference it made on this chart… 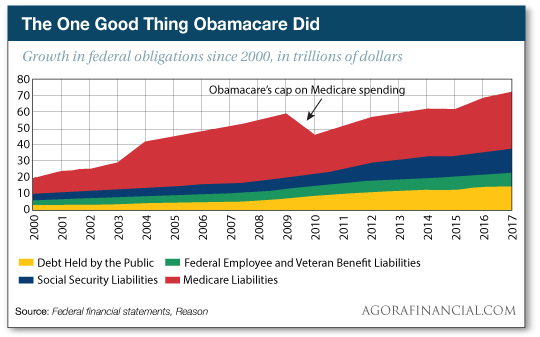 True, many of the cost savings anticipated by Obamacare’s architects haven’t panned out. But imagine how much bigger the red part of the chart would be now without that one-year drop.

Well, the Trump White House and Republican Congress just chucked that Medicare cap out the window.

It’s a little-noticed plank of the budget deal agreed to earlier this month. You know, the one that added $300 billion in new spending over the next two years above and beyond the spending already planned.

The GOP, write Goodman and Saving, is “recommitting the federal government to trillions of dollars of entitlement spending for which there are no dedicated future revenues.”

Well, at least Republicans are being true to form when they hold all the levers of power: If you wondered about the big bump up in the chart between 2003 and 2004, that’s the Medicare prescription drug program of George W. Bush. Heh…

Result? The timeline for when “something in the system is going to break” has now been shortened.

Except there’s no way in hell that health care spending will ever consume 50% of the federal budget. Something in the system will indeed break — catastrophically so — before then.

As the late economist Herbert Stein once said, “If something cannot go on forever, it will stop.”

We don’t know what it will look like when that happens. But as we said the last time we addressed this topic in depth in 2015, you’d do well to think about how to prevent the onset of chronic conditions like heart disease, stroke, cancer, diabetes, obesity and arthritis. Or if it’s too late for that, how to keep them from worsening. The treatment we’re accustomed to now might not be available then.

To the markets, which are stabilizing after the blow dealt yesterday by the new Federal Reserve chairman, Jerome Powell.

Powell struck a “hawkish” tone in his first appearance before Congress as chairman — or more hawkish than many traders were expecting, anyway. By day’s end, the Dow had lost 300 points on the heels of a 400-point gain the day before.

The big economic number of the day is the Commerce Department’s latest guess at GDP for the final quarter of 2017. At an annualized 2.5%, it’s down a touch from the first guess a month ago.

A rising fed funds rate is no big deal in the estimation of Alan Knuckman, our man in the Chicago options trading pits.

The freakout over Powell’s testimony yesterday? It’s all about whether the Fed raises the rate three times this year as projected… or four instead.

“If the Fed hikes interest rates four times at a quarter of a percentage point each time, then the interest rate will be around 2.5% by year-end 2018.

“2.5% is still more than 2.3 percentage points below the average. Which means… money will still be very cheap to borrow in order to stimulate growth for corporations.”

Could it be that one out of every three homebuyers last year made an offer sight unseen?

That’s the takeaway from a survey commissioned by the real-estate website Redfin. Folks who bought a home within the past year were asked, “Did you, at any point in your search process, make an offer on a home you hadn’t seen in person?”

Redfin has performed this survey three times in the last two years — most recently in November and early December. The 2017 numbers are far higher than 2016’s… 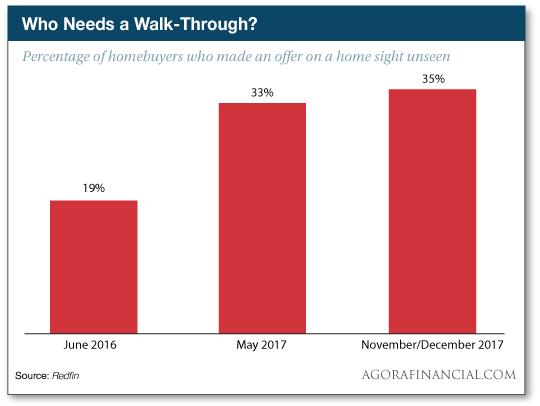 The numbers are even higher among millennial homebuyers — 45%, according to the November survey.

Granted, Redfin has a slight conflict of interest putting this information out there. It offers a “3D Walkthrough” service for homebuyers, and the press release accompanying the survey touts how Redfin agents cater to customers who for one reason or another feel compelled to place an offer sight unseen.

Sorry, there’s no comparable survey from the peak of the housing-bubble days. Now that would be interesting…

Reports of the compact disc’s death have been greatly exaggerated.

True, streaming services like Spotify are all the rage now… and Best Buy plans to stop selling CDs by this summer. CD sales have collapsed to less than 10% of their peak in 2000.

“Yet it’s hard to reconcile that gloomy outlook with what’s happening in the indie music world, where the CD is still thriving,” according to a report at Fast Company. “The online music store Bandcamp reported 18% year-over-year growth in CD sales for 2017, up from 14% growth in 2016.

“It turns out that even in the age of streaming audio, the CD still has value, especially for indie artists that want to offer something tangible to their fans. While that also helps explain the resurgence of vinyl albums, CDs are still easier to produce, cheaper to buy and more profitable to sell than vinyl. They also sound objectively better.”

Uhh, we’re sure some hardcore audiophiles would take issue with that last claim. But they’re the deep-pocketed ones who buy a turntable, tonearm and cartridge from separate manufacturers…

“The numbers pale in comparison when you take handgun deaths versus military action deaths, and yet it’s always a bottom-up solution, not top down. Maybe instead of us giving up our guns and believing the world will get better, the gov should quit killing everything that looks threatening, so they can cut their spending (share the policing of the world with the world) and gain some respect from their own people. Then maybe we wouldn’t feel the separation that we feel with our government, a separation that is only comforted sometimes by a well-armed citizenry.

“A big shout out to the Founders for thinking ahead. Too bad they didn’t do the same for the money system. Hey, wait a minute…”

Yesterday on Twitter, Rep. Adam Schiff — the top Democrat on the House Intelligence Committee and a fount of overhyped “Russian meddling” twaddle — got seriously owned for just this contradiction… 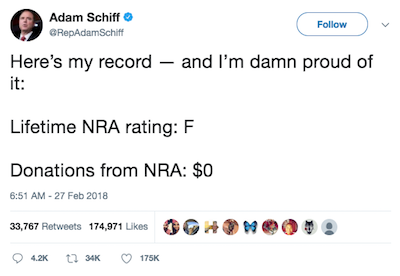 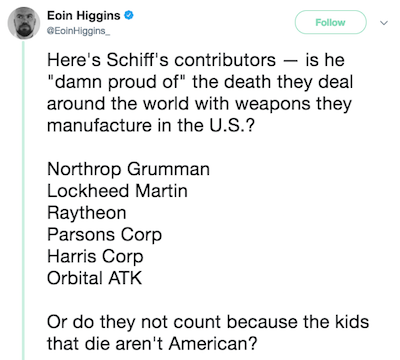 As we said late last year, the Russia-Trump stuff is much more about ginning up a new Cold War with Russia than it is about taking down Donald Trump. Ballyhooing the Russian “threat” is how Schiff delivers on the “investment” made by Raytheon and the rest.

“You addressed the question regarding pensions of ‘How did we get here?’” a reader writes.

“I think there is a better answer, and that is when the trough-feeding hogs figured out they could fleece the public coffers. Tocqueville was right on this. This is one instance where, as they say, ‘There ought to be a law.’ That law being that no individual working in the public sector or deriving their pay from the public/taxes should be allowed to have a pension funded by those sources. Yes, that means the military too, and I am a retired vet.

“Mind you, I am referring to the defined plans that drain the vitality from their hosts. For people who have sacrificed much in the service of this country and suffered injuries, other compensations should be provided. Too many of them have left parts of themselves in some craphole places of the world.”

“I do understand the point that the systems are underfunded and not solvent,” another writes, teeing up an objection.

“As an ‘older government worker,’ I am one of the last of a dying breed. I have a pension. I have worked my entire life in the government, working with mismanagement, waste and many headaches.

“Please do not judge me, nor put good workers into the bad category.

“Yes, I will receive a good retirement by ‘today’s’ pitiful standards. But I have worked for it. Many in the private sector make more money, and many have golden parachutes. I have what was agreed to, and I have kept my part of the bargain.

“Don’t minimize what I have done for our country and don’t paint me as a problem.”

The 5: This isn’t about you or what you paid into the system. It’s about the politicians and the pension managers making generous promises with what amounts to other people’s money.

We return to the example of CalPERS because it’s the biggest public pension plan in the country and because it’s in such rough shape.

Wrote former CalPERS board member and former California state controller Steve Westly last year: “The slow creep of pension costs is crowding out investments in other areas, including education, environmental stewardship, social services and public transportation. In essence, the state is being forced to default on its social obligations to pay for its pension obligations.”

On the other hand… Gov. Jerry Brown, now that he has only a few months left in office, is talking openly about cuts to pension benefits. A pending court case, he says, could give his successors “the option of considering pension cutbacks for the first time in a long time” during the next recession.

Bottom line: Someone’s going to get the short end of the stick — the pension plan participants, taxpayers or both. As with federal health care spending described today, something’s gotta give.

P.S. Ten winners so far in 2018 for Alan Knuckman’s Weekly Wealth Alert — the latest this morning.

Call options on Exxon Mobil just paid off — a 52% gain in only two days.

Yes, there’s more where that came from. Alan’s next trade is due next Monday. And as our publisher explains right here, it could make a meaningful difference to your retirement.