Trump Follows Through On Promise, Market Tanks (What?!)

Yeah, let’s file this one away for future reference… 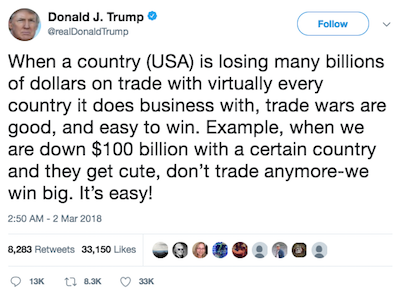 Wall Street isn’t buying what he’s selling. The Dow has shed another 300 points as we write, on top of the 420 lost yesterday.

Usually we avoid attributing day-to-day market moves to one cause or another; it’s one of the stupidest habits of mainstream financial media. But yesterday, the Dow was more or less flat on the day when the news came out about steel and aluminum tariffs. By the close, the Dow had tumbled 1.7%.

What’s more, the small-cap Russell 2000 dropped only a third of a percent. Small-cap stocks tend to have a more domestic focus; they’re less exposed to shifts in international trade.

In all of Wall Street’s euphoria last year about the Trump economic agenda — Tax cuts! Deregulation! Infrastructure! — the part about a trade war was conveniently forgotten.

“How can the stock market possibly be surprised at a trade war?” tweeted our macroeconomic maven Jim Rickards yesterday. “Trump has been threatening this since 2015.” 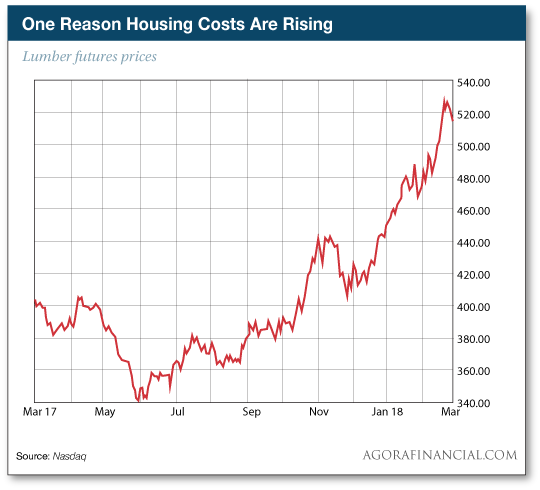 The cost of building a new house is rising for many reasons, but that’s surely one of them.

We don’t know many specifics about the metals tariffs other than they will be 25% on imported steel and 10% on imported aluminum. The details won’t emerge till next week. By some accounts, the president wanted to get the word out quickly because in a few days there’s a special election for a House seat in the suburbs of Pittsburgh.

Which reminds us of an earlier episode in the annals of steel tariffs.

We’ve told it before, but we hope you’ll indulge us in the retelling: In 2002 — right around this time of year, in fact — the Bush administration was getting antsy about the re-election chances of several Republican congressmen in the steel country of Pennsylvania, Ohio and West Virginia. So Bush laid on tariffs of up to 30%, depending on the type of steel.

Research by the Institute for International Economics found the tariffs indeed saved 3,500 steel jobs. Unfortunately, industries that relied on cheap imported steel cut at least 12,000 jobs — perhaps as many as 43,000.

Another study by the Citac Foundation pegged the number of lost jobs far higher, at 200,000.

We can’t forecast an identical outcome this time. But we can give you a few pairs of numbers worth comparing and contrasting…

The losers yesterday included steel users like Boeing, down 3.5%… and General Motors, down 4%.

The impact will be felt throughout the economy. One small example is found in this statement from MillerCoors: “Like most brewers we are selling an increasing amount of our beers in aluminum cans, and this action will cause aluminum prices to rise.”

Hope you’re enjoying that extra money in your paycheck that resulted from the tax cut: Chances are excellent you’ll spend a large chunk of it on the rising cost of everyday goods you already use.

What exactly is the president’s endgame here? Does he really believe U.S. Steel and Nucor and ArcelorMittal are going to build new steel mills in the swing states he carried in 2016? Or does he expect you and me to build backyard blast furnaces like in Maoist China during the Great Leap Forward? (If memory serves, that didn’t work out too well.)

Or maybe he just wants to stick it to the Chinese.

Never mind that China is a distant No. 8 on the list of countries we import our steel from… 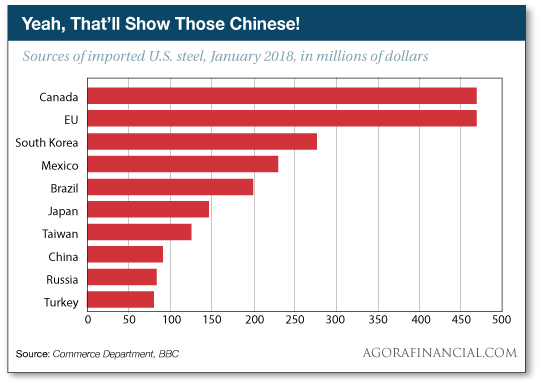 “Mr. Trump’s announcement appeared to be a diplomatic jab at Chinese President Xi Jinping,” the Journal continues, “coming the same day as his top economic adviser was meeting at the White House with the Trump economic team to try to ease trade tensions.” So there’s another possible explanation for the timing.

Well, you read it here first last summer — Jim Rickards forecasting “the most intense trade war the U.S. has waged since the notorious Smoot-Hawley tariffs of the 1930s.”

To underscore the gravity, he added “That currency war has been blamed as a cause of the Great Depression ever since.”

And yes, it’s all about China. The only reason Trump has held off till now is that he was hoping Chinese leaders would do Washington’s bidding with North Korea. “What Trump wanted,” Jim said, “was help convincing North Korean leader Kim Jong Un to stop his nuclear weapons and missile development programs. If China could use its clout with North Korea to convince Kim to give up the weapons programs, a war could be avoided. That was worth some delay on tariffs and currency sanctions.”

But wouldn’t you know it, North Korea isn’t Beijing’s “little brother” after all; it’s a different country with its own interests, and China’s influence was less than Trump thought. (Every president going back to Clinton has made the same miscalculation.)

For the record, Jim is sanguine about the outcome of these tariffs — no rerun of the ’30s. “The stock market is not America,” is his take on the trading reaction. “It’s a secondary market trading venue designed to allow professionals to take your money. What counts are jobs.”

As the morning wears on, the Dow’s losses remain steady at 300 points. The Big Board is back to breakeven for the year.

Among the day’s noteworthy movers is a name we’ve already mentioned a couple of times this week: Smith & Wesson parent American Outdoor Brands is down more than 1.5%. After the close yesterday, AOBC reported quarterly sales tumbled 33% from a year earlier. That’s a lot of people who’ve been complacent that Trump won’t come after their guns, new evidence to the contrary notwithstanding.

Oh, no, those “Russian meddlers” are coming after the U.S. energy industry in addition to our sacred institutions of democracy!

Staffers on the House Science, Space and Technology Committee have prepared a report accusing Russian internet trolls of tampering with U.S. energy markets “through divisive and inflammatory posts on social media platforms.”

The report acknowledges the posts got little circulation, but House Science Committee Chairman Lamar Smith (R-Texas) is clutching pearls anyway: “To the extent that America produces more energy of any kind, it guarantees Russia more competition. Russia wants to reduce competition from the United States.”

Reminder: The IRA is the same outfit that we’re supposed to believe committed acts during 2016 tantamount to Pearl Harbor with posts like this… 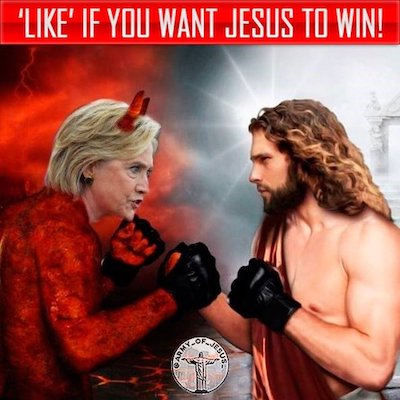 This “report,” if it’s even worthy of that name, strikes us as an attempt by career bureaucrats to get credulous Republicans on board with their agenda for a new Cold War. Who knows, it might work, too.

“Now that Trump has sold out to the anti-gunners,” a reader writes, “it’s becoming increasingly more obvious to the America public that the Democrat Party is slowly but surely co-opting the Republican Party and turning it into socialism lite.

“There are a lot of gun owners in America, and if Trump manages to win re-election in 2020 it won’t be because gun owners think of him as one of their own but that the Democrat candidate was even worse on the Second Amendment. If ever a pro-gun party like the Libertarians starts making inroads, expect to see lots of gun owners remember this act of betrayal.”

The 5: When this president says, “Take the guns first, go through due process second,” there’s not a whole lot of room for misunderstanding, is there? It’s impossible to chalk it up as another brilliant jiu-jitsu move to keep his political opponents guessing.

One observer in the patriot/prepper movement compared what happened this week to Poppy Bush flip-flopping on his “read my lips” tax pledge… and becoming a one-term president. We shall see…

On the topic of the looming state pension crisis, the mailbag is still lively: “I wonder if the self-professed government worker ever questioned where the government was going to get the money to pay for their pension, or any of the increases thereof.

“If not, the whole ‘I kept my end of the deal’ speech rings a bit hollow. Every victim of every Ponzi scheme that’s ever collapsed has said the same thing. If it sounds too good to be true, it probably is. Which raises the question: Why is it a Ponzi scheme if you or I do it, but it’s a pension/entitlement system if the goobbermint does it?

“Oh, yeah, that’s right, they have the guns to take stuff away from other people to make good on their promises — which if anyone else does it is called armed robbery.

“If I sound cynical, it’s only because they have demonstrated themselves worthy of my cynicism.”

After we inadvertently opened the vinyl-versus-CDs can of worms this week, a reader wrote, “An audiophile is someone that listens to the equipment instead of the music.” Heh…

Writes another: “Speaking as a hardcore audiophile and former audio journalist: CD is objectively superior to vinyl as an audio reproduction medium.

“Without breaking a sweat, CDs can exactly reproduce the sound of the masters from which they are created, a feat that is nearly (often completely) impossible to achieve with vinyl records. From the standpoint of sonic performance, CD is the best mass-market music delivery format that has ever existed.

“There are three main reasons some people remain attached to vinyl records, none of which has anything to do with accuracy. First is nostalgia. Second is a liking for certain distortions characteristic of vinyl playback. Third is a desire to stand apart from the pack.”

The 5: We take it you’re not one of those folks who’s into the “warmer” sound of gear made with vacuum tubes, either?

P.S. The cryptocurrency market is at a crossroads, says James Altucher… and you don’t want to be caught on the wrong side of the trade.

James has a time-sensitive message you don’t want to miss. It could be out of date as soon as this weekend… which is why we’re taking it down tonight at midnight.