We realize after the thrills ’n’ chills of the last few weeks, the markets are starting to look a bit sleepy again. But “closer to erasing correction losses”?

From here, the Dow still has nearly 1,200 points, or 4.7%, to climb before reaching its record levels of late January. That headline isn’t just a stretch, it’s a pulled muscle.

Ninety minutes into the trading day, the headline was updated: “Dow Drops 100 Points, Erases Gains as Boeing Falls More Than 2%.” Life comes at you fast…

“This is one of the top three most expensive stock markets in history,” says Fred Hickey. “The other two comparable markets (1929 and 2000) ended in crashes.”

When Mr. Hickey makes a call like that, we pay heed. For more than 30 years, he’s helmed a newsletter called High-Tech Strategist. In 1999, he called the dot-com boom “the greatest investment mania since Tulip Bulbs” — a reference to an infamous episode in 17th-century Holland.

His call proved prescient as the bubble burst in early 2000 and the Nasdaq collapsed 78% by 2002. (While the Dow and the S&P 500 are flailing, the Nasdaq set a record high Friday. Hmmm…)

His take now? “The Fed is raising rates and selling off bonds,” he tells CNBC. “Long-term interest rates are rising on record U.S. and global debt levels. It’s time to be defensive.”

“Defensive” to his mind means cash and gold.

On the one hand, that’s disappointing — considering how gold has already punched through $1,350 twice this year, only to pull back.

On the other hand, gold’s long-term direction still looks constructive — a workmanlike climb going back to the late 2015 lows at $1,050… 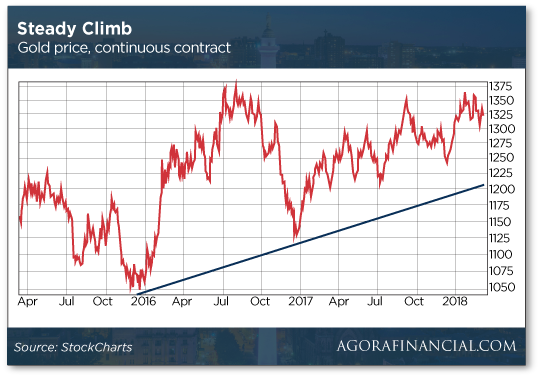 [Ed. note: There’s no better time than now to put a technique to work that we call “cash from gold.”

Forget everything you’ve been told about how “gold has no income stream.” Using this strategy, you can extract hundreds of dollars from gold in a matter of moments — money you can spend or invest however you like.

As long as we’ve already drawn parallels between the present moment and the dot-com boom, here’s another one: shady accounting.

From this morning’s Financial Times: “Global accounting watchdogs identified serious problems at 40% of the audits they inspected last year, raising fresh concerns about the quality of work being carried out by the world’s largest accounting firms.”

The International Forum of Independent Audit Regulators conducted 918 audits of publicly traded companies around the world. About 370 of those audits turned up trouble. The most common problem was a failure to “assess the reasonableness of assumptions.” In other words, the numbers have pie-in-the-sky expectations baked in.

“Accounting irregularities” have already figured into the liquidation of two British firms — the retailer BHS and the construction firm Carillion. Shady bookkeeping also figured into a scandal at the Brazilian oil firm Petrobras and a collapse in the share price of South African retailer Steinhoff.

As you might recall, the dot-com collapse featured two epic failures based on outright fraudulent bookkeeping — Enron and WorldCom. Enron’s failure was the death of the Arthur Andersen accounting firm.

And here’s yet another sign we’re in the late boom phase of the boom-bust cycle — people getting nervous about gasoline prices.

According to AAA, the national average for a gallon of regular unleaded is $2.53. But the association forecasts that figure will rise to $2.70 later in the spring. Sounds plausible to us, if only because the “summer blends” of gasoline required by the clean-air laws are more costly to produce.

But here’s the thing: AAA conducted a survey asking motorists at what point rising gas prices would spur them to “change their driving habits or lifestyle.”

“We found $2.75 was the tipping point for about 20% of drivers,” AAA’s Robert Sinclair tells CNBC. “For 40%, it was $3 a gallon. And we’re there, we’re at that level in a lot of cities, a lot of metropolitan areas around the country.”

Hmmm… We recall $4 gasoline a decade ago as one of several catalysts that finally pushed the economy over the edge into the “Great Recession.” Maybe the pain threshold is lower this time, given high household debt levels.

Binance — the fastest-growing crypto exchange — was hacked in a matter of two minutes on Friday. News of the large-scale hack set off panic among some crypto investors.

Meanwhile, “rumors have been circling for weeks that the U.S. Securities and Exchange Commission (SEC) would intervene in cryptocurrency markets,” says James Altucher.

“On Wednesday the SEC issued a warning that cryptocurrency exchanges needed to register with the agency or risk regulatory action.”

Personally, James accepts regulation. He believes it’s the natural progression in digital currency’s evolution. To his mind, regulation benefits crypto by shaking out scam cryptos and legitimizing valid cryptos like bitcoin and ethereum.

“Learn to play with the rules of regulation,” James says, “and you’ll win anyway.

“Markets get scared by the threat of new regulation and then inevitably recover.”

With that in mind, he advises: “If you’ve been waiting to buy (or are looking to buy more), I’d buy a little now and wait… to see how this SEC thing plays out.”

Perhaps bitcoin’s recovery has something to do with the aforementioned Binance and its unconventional measures to counter hackers.

After the hack attack last week, Binance says “all funds are safe” although it was unable to reverse some of the trades the hackers targeted. No, we’re not sure what the distinction is, either.

“The first person to supply substantial information and evidence that leads to the legal arrest of the hackers, in any jurisdiction, will receive the equivalent of $250,000 USD in BNB,” says the exchange. “The exchange rate will be determined at the time of transfer… If multiple sources/segments of data are used to lead to the final legal arrests, the bounty may be split between sources.”

What’s more, Binance says it’s set aside $10 million for future bounties, and it’s encouraging other exchanges to do likewise.

Hey, nothing like a little self-regulation. The exchanges know they’re toast long term if they don’t get their act together…

Ray points us to a new study from the academic journal Addiction. The takeaway: While medical marijuana is now legal in more than half the states, it has not resulted in increased marijuana use by adolescents.

“That’s long been one of the biggest beefs of the anti-pot crowd,” Ray says. “Making pot more available to adults means that kids will be able to gain access to marijuana more easily too, they claim. But a meta-analysis of 11 academic studies found that that’s just not the case in jurisdictions where marijuana is legal.

“This latest round of data helps take the wind out of the sails of naysayers who’ve been using make-believe reasons to fight against legal pot.”

By the way, did you see Attorney General Jeff Sessions is suing California over immigration? We told you as soon as Trump named him to the job that he’d make immigration a higher priority than weed. Recreational cannabis becomes legal in the Golden State July 1. Invest accordingly.

After some rather dreary reflections at the end of last week, a few readers took time to write.

“Hey, Dave,” said one, “your rather depressed piece on the state of the union, with inferences that are not exactly complimentary to most fellow Americans, wasn’t uplifting.

“However, as I was sifting through the news this morning, I came upon a bright spot of information to cheer you… The Twitterites, especially millennials, are spending up to 24% less time glued to their Twitter app on their phone! Yea! Finally, some good news.”

“Dave — Appreciate what you guys have been doing at The 5 for over a decade now. Keep up the good work and don’t get discouraged!

“In reply to Friday’s reader about the Agora customer base changing: One of the main reasons I read The 5 is precisely because you guys call out the misleading propaganda on both sides of the political and economic spectrum.

“There are way more of us who exercise independent thought than there are of the MAGA or Resistance bozos. We’re just too busy loading up on gold, bitcoins, cannabis plays and numerous other opportunities to get sucked into the noise…”

“As a newly avowed centrist, let me add fan mail for your 5 Min. Forecasts. They are becoming the favorite of my multitudinous investing waypost junk mails.

“Thank you for being right up the middle and saying it as it is. You must be pretty ancient, Dave, to be able to see like that. And thank goodness you’ve earned your coolness credibility to be able to write under Agora’s letterhead like that. ‘Oh, it’s just Dave… hey, he may have something there.’

“It takes seasoned navigation of the razor’s edge, and cultivation of a certain persona, to get to this place you’re at. Thank you.”

“It’s interesting to read others’ views. To rant about something that I find disturbing from either party is, I feel, a waste of time.

“If someone feels that strongly, then they should spend their time as a political activist, trying to change the system to what they deem as better. I, unfortunately, feel like a small cog in a large wheel that is rolling uncontrollably toward a very disturbing future for my grandkids. They are the ones who will suffer the change.”

The 5: We’re here for the “small cog” — trying to show you ways to better your life via means that are far more under your control than the actions of politicians and central bankers. The fellow who’s “loading up on gold, bitcoins, cannabis plays and numerous other opportunities”… he’s got the right idea. That’ll do more to secure your grandkids’ future than most attempts to seek redress of your grievances in Washington…

“Very refreshing,” writes our final correspondent who says he’s both a millennial and a CPA.

“Enjoying Jim Rickards immensely as well. If you can, share this with Jim and your team. The best compliment I can think to give you is as follows…

“Ray Dalio said to win in the markets ‘You have to bet against the consensus and be right’… I feel that you all help give me the information to do so.

“Speaking of which… would love to hear your thoughts on when the 10-year rate jumps above 3–3.75% and what that might mean to the market. I am hearing Paul Tudor Jones saying 3.75% by year-end, JP Morgan saying 40% market correction, etc. Can you all walk us through how markets might shift as rates rise?”

The 5: That’s a huge question, and our 5 Mins. are almost up. We promise to tackle it regularly in the days and weeks ahead.

Right now we’ll just leave you with the thought that along with many of the other phenomena detailed in today’s episode of The 5, rising interest rates are symptomatic of the late boom stage in the boom-bust cycle.

P.S. Did you get the email in which we said your account had been flagged?

If you ignored it, you might be missing out big-time. Here’s your final chance to see what the excitement’s all about. And we do mean final — the offer comes off the table at midnight.