So… Just how long was it before the president realized he was being had?

The big business headline this morning is that the Trump administration has put the kibosh on the microchip maker Broadcom’s (AVGO) bid to buy its rival Qualcomm (QCOM).

Because Broadcom is based in Singapore, the federal body known as CFIUS — the Committee on Foreign Investment in the United States — had to sign off on the deal. CFIUS nixed it late yesterday because “the bid could have implications for the U.S.’s broader technological competition with China,” according to this morning’s Wall Street Journal.

CFIUS’ reasoning, near as we can tell, goes something like this: Broadcom has a reputation for major-league cost-cutting. If it took over Qualcomm, then Qualcomm’s efforts to develop “5G” mobile technology would stall out, allowing Chinese giants like Huawei to leapfrog America when it comes to next-gen wireless communication.

No, it doesn’t make any sense to us, either. But this is the government we’re talking about.

“Wait a minute,” you might be saying. “Didn’t you mention a while back that Broadcom was going to move its legal domicile from Singapore to the United States?”

Indeed, we did. The announcement was the occasion for a White House photo op last November featuring the president and Broadcom CEO Hock Tan. Said The Donald, “I want to thank you very much for choosing us.”

With most presidents, but especially this one, an appearance with a CEO implies that new jobs are on the way. But mergers usually result in “redundancies” that mean people get let go. Surely a Broadcom takeover of Qualcomm would be no different.

As we said at the time, moving Broadcom’s legal domicile was nothing but a ruse to end-run a CFIUS review of the merger. 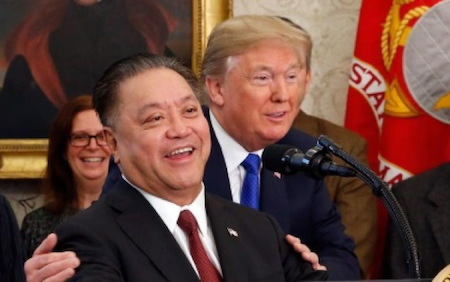 Our original caption on Nov. 6: “I can’t believe I snookered this blowhard so easily!”

Somewhere along the line, all of this must have dawned on the president. He must’ve been seriously torqued off — heh.

Too, this president and his advisers are viewing trade through the prism of “national security.”

CFIUS said as much in a letter to Broadcom and Qualcomm earlier this month: “Given well-known U.S. national security concerns about Huawei and other Chinese telecommunications companies, a shift to Chinese dominance in 5G would have substantial negative national security consequences for the United States.”

Still more tariffs targeting China are in the works to combat the Chinese government’s alleged theft of “intellectual property.”

Where, dare we ask, does this end?

Defenders of the president’s trade policy argue that Ronald Reagan’s tariffs on Japan in the 1980s spurred the Japanese to invest and create jobs in the United States — Toyotas built in Kentucky and Hondas built in Ohio, for instance.

But how can that possibly be the same playbook this time? If the Chinese wanted to build a steel mill in Alabama, would even they be allowed to? Or would that too somehow jeopardize “national security”?

It’s one thing for the president to say he’s waging a trade war to force China to “play fair.” But will the Chinese get the chance to “play” at all? And if they don’t, then what?

The big political story this morning figures into the equation — the president firing Secretary of State Rex Tillerson and nominating CIA Director Mike Pompeo to replace him. Pompeo is well-known for belligerent rhetoric about governments that don’t toe the Washington line — China, Iran and Russia too.

It’s not often we’re in accord with CNBC’s Jim Cramer, but he’s on the mark when he describes one implication of the move: “It says to China, ‘You are our enemy.’ This is about China being our intellectual and economic enemy. I think [saying] anything short of that is just a mistake.”

To the markets, where inflation and the Fed are in view.

The Labor Department is out this morning with the consumer price index. It registers a 0.2% increase for February.

Year over year, inflation is running 2.2%. As always, any resemblance to your own cost of living is purely coincidental. (Shadow Government Statistics, whose revisionist unemployment rate we described here on Friday, also runs the inflation numbers the way they were back in Jimmy Carter’s day; by that measure, inflation is just shy of 10%.)

But never mind the accuracy of the inflation figures — it’s the overall trend that matters more to markets. Official inflation has been running in the low 2% range for six months now. The whiff of resurgent inflation we were detecting late last year hasn’t materialized. At least not yet.

That’s the backdrop for the meeting of the Federal Reserve’s Open Market Committee next week. It will be the first with the new chairman, Jerome Powell, in charge.

There’s no doubt the FOMC will raise its benchmark fed funds rate a quarter percentage point. What is up in the air is the FOMC’s projections for how many times it will raise the rate this year — three, as previously projected, or four. A steady inflation rate makes it more likely the Fed will stick with three.

And with “steady as she goes” the watchword, the major U.S. stock indexes are likewise steady. The Dow and the S&P 500 are up slightly as we write; the Nasdaq and the Russell 2000 are down slightly.

Jim reminds us that in addition to jacking up the fed funds rate, the Fed is also shrinking its bloated balance sheet.

Through “quantitative easing,” or money printing, the Fed’s balance sheet blew up fivefold between 2008 and 2014 as the Fed propped up markets by buying scads of Treasury debt and mortgage-backed securities.

Since last fall, that process has been running in reverse. “This is the opposite of money printing; it’s money destruction. Instead of QE, we now have QT, or quantitative tightening,” says Jim.

“The Fed has been transparent about the rate at which they will run off their balance sheet this way, although transparency should not lead investors to complacency. The balance sheet reduction tempo as of late 2018 is $600 billion per year, equal in impact to four 0.25% rate hikes per year.

“The annual combined impact of the Fed’s rate policy and QT is a 2 percentage point increase in interest rates. For an economy addicted to cheap money, this is like going cold turkey.”

Essentially, the Fed is trying to raise rates and shrink its balance sheet before the next crisis arrives… at which point it can lower rates and expand the balance sheet again, as it did after the Panic of 2008.

“The Fed’s conundrum,” Jim goes on, “is whether they can tighten monetary conditions now without causing the recession they are preparing to cure.”

Jim says don’t count on it. He sees two potential scenarios from here…

In short, “the Fed has no good choices,” says Jim. There’s some context for the Fed meeting next week you won’t see anywhere else.

“Now is the time to reduce holdings of stocks and diversify into cash, gold, silver and real estate. This diversification will preserve wealth while the currency wars and trade wars rage all around and a befuddled Fed tries to find its way.”

In the meantime, small-business owners haven’t been this euphoric since 1983.

The National Federation of Independent Business is out with its monthly Small Business Optimism Index. At 107.6, the number is the second highest ever.

“Small-business owners are telling us loud and clear that they’re optimistic, ready to hire and prepared to raise wages — it’s one of the strongest readings I’ve seen in the 45-year history of the index,” says NFIB chief economist Bill Dunkelberg.

For years, taxes and regulations were the top categories when survey respondents were asked to identify their single most important problem. Now, for a second straight month, “quality of labor” is tops, cited by 22%. The figure hasn’t been that high since the dot-com bubble was bursting in 2000.

Well, we’ve been saying for a while we’re in the late boom phase of the boom-bust cycle…

And now a 5 business travel alert: It seems the feds are getting nosy about your cellphone and laptop even if you’re on a domestic flight.

As you might know, Customs and Border Protection has long asserted the authority to search your electronic devices when you’re returning to the country; as far as the agency is concerned, your Fourth Amendment rights don’t apply at the border.

Now reports are emerging about the TSA demanding access to phones and laptops before passengers board domestic flights. The reports are fuzzy and sporadic, but there are enough of them that the ACLU is suing the TSA — hoping to force the agency to come clean about what its policy actually is.

The only concrete incident we know of comes from a story in The Guardian, from a 64-year-old woman who says she had her devices searched twice in the last year while flying within California.

On one of those occasions, TSA agents asked to see both her personal iPhone and her work iPhone. “The agents did not ask her to unlock the phones, but took them for at least 10 minutes out of her view, she said, adding that she quickly became distraught.”

“I no longer had my phones,” she said, “so there was no one I could contact. It just feels like an invasion of privacy, especially when they are not telling you what the problem is.” (She asked to remain anonymous, understandably fearing reprisals from the feds next time she flies.)

For its part, the TSA says it won’t comment on the suit, but insists “TSA does not search the contents of electronic devices.”

Hmmm… Sounds as if the feds are once again testing how far they can push the envelope and still retain the consent of the governed.

P.S. We know the streak has to end sometime, but not yet: This morning Alan Knuckman urged his 42-Day Retirement Plan readers to sell half their position in call options on Nuance Communications — a trade laid on barely a week ago.

That’s 26 winners out of 26 closed trades since we launched this service last October.

And the biggest gains are only weeks away, thanks to a phenomenon he calls the “April apex.”

What’s that? See for yourself at this link.