The big economic number of the day turned in a gangbusters performance.

The Conference Board is out with its leading economic indicators for February — comprising seven metrics covering the economy and three more covering the financial markets.

The index jumped 0.6% for the month — higher than the most optimistic guess among dozens of economists polled by Bloomberg. And that’s on top of a revised 0.8% jump in January. That’s despite a weak stock market and a slump in building permits.

Long story short, the indicators haven’t looked this good in seven years. “Robust” economic growth is in store for the balance of 2018.

And yet the “safety trade” is on today.

The Dow is down 350 points as we write, touching a low last seen three weeks ago. Treasury prices are rallying, sending yields down; the yield on a 10-year note just registered its steepest plunge in six months. It’s back to 2.81%.

To hear the mainstream tell it, traders are jittery about a trade war; as mentioned here yesterday, the White House is due to roll out its latest announcement sometime today.

We’re always skeptical about such facile explanations. Back when the market was plunging in early February and the mainstream was latching onto “inflation fears,” we pointed out the market was way overdue for a pullback. If it wasn’t fear of inflation, it would have been something else.

Besides, as we said three weeks ago, why should anyone be surprised about a trade war?

It was a major plank of Donald Trump’s campaign platform from Day One in 2015. Heck, he’s been opinionizing about public policy for three decades and trade is the one topic on which he’s been consistent.

If anything, conventional wisdom on Wall Street is still underestimating how serious he is about it, says Jim Rickards. For instance, “Trump may give Canada and Mexico more time in the context of the ongoing NAFTA negotiations, but he expects results. If Trump cannot get concessions on NAFTA, the steel tariffs will apply with full force to Canada and Mexico. There’s almost no chance that China, South Korea and Europe will receive any exemptions.

“The elements of an escalating trade war are in place,” Jim goes on.

“Once markets come to this realization, stocks will revert to recent lows and head even lower, while gold will break out above the recent $1,365 per ounce high and continue its march toward the $1,450 per ounce level, which I expect later this year.”

In addition, Jim’s Project Prophesy system has identified a lucrative short-term trade resulting from the White House’s maneuvers. The profit potential is as much as 2,770% in the coming weeks. This jump might well be underway by the time you read this, assuming the White House has made its announcement.

Jim just recorded a time-sensitive message about this opportunity: We urge you to check it out right away while the information is still fresh.

About those falling Treasury rates this morning: Jim says thanks to Federal Reserve policy, the 10-year yield will fall from 2.83% this morning to 2.2% by year-end. “Significant gains are in store for those who buy Treasury notes now.”

The Fed threw a slight curve at the markets yesterday at the conclusion of its every-six-weeks policy meeting. The pooh-bahs are sticking to their outlook for two more increases in the fed funds rate this year… but they also anticipate accelerated economic growth that would justify three increases in 2019 instead of the two they previously projected.

We pause here to remind you the Fed has a horrendous track record of forecasting what will happen to the economy and thus how it will tweak policy in response.

Indeed, Jim says the Fed is misreading the economic tea leaves right now: “The Fed is tightening interest rate policy in the face of a fundamentally weak economy. The Fed does not believe the economy is that weak. They see the economy as gaining strength and on the verge of inflation. They base this on the Phillips curve, which says that low unemployment rates equal higher inflation.

“Ironically, the Fed might be tightening even if they agreed that the economy is weaker than expected,” Jim goes on.

“This is because they have another agenda besides fighting inflation (which may or may not be in the cards). They want to raise rates and reduce their balance sheet so they can cut rates and expand the balance sheet again in the next recession. The Fed also wants to pop asset bubbles in stocks and real estate before they grow dangerously large.

That’s the plan, anyway. But Jim says the Fed will be forced to junk it as recession looms later this year.

“The Trump tax cuts will not stimulate the economy,” he explains, “because we have too much debt already. Tax cuts just add to the debt.

“The economy is facing major structural head winds including high real rates, demographics, a debt-bomb death spiral and the deflationary impact of technology.”

Too, the Fed isn’t just raising the Fed funds rate. “The Fed is tightening policy every day with their balance sheet normalization, which actually reduces the money supply. It’s like throwing $100 bills into a furnace. The Fed is underestimating the impact of this unprecedented effort at balance sheet reduction.”

As a result, Jim says the Fed will raise the fed funds rate once more this year, in June, and that’ll be it for 2018.

“By then, economic growth may be so weak and budget deficits so out of control that the Fed has to throw in the towel and use forward guidance to signal they won’t hike again possibly for the rest of this year.”

Money will flee for safety — today’s market action, but on a grander scale. Great for Treasuries. Gold too.

Gold, by the way, has been steady-Eddie while stocks sink and bonds soar today. The bid is holding on to most of yesterday’s gains at $1,327.

Meanwhile, after a day’s pause, the rout in tech stocks has resumed in earnest. The Nasdaq’s losses are just as steep as the Dow’s.

Facebook has shed another 2.5% as we write. CEO Mark Zuckerberg finally piped up yesterday about the Cambridge Analytica story. At the start all he had was his usual pabulum about how FB “made mistakes” and promising “to protect your data.”

But then he went on CNN and said he welcomed government regulation of his firm. More than that, in fact: “I actually think the question is more ‘What is the right regulation?’ rather than ‘Yes or no, should it be regulated?’”

How predictable. Entrenched industry leaders love regulations because they have the effect of shutting out upstart competitors. Now that there’s finally a Facebook controversy that actually poses a threat to the company’s continued growth, Zuck is exercising max opportunism. Oy…

For the record: A “partial government shutdown” set to begin midnight Friday night will likely be averted.

Republicans and Democratic leaders in Congress have come to terms on a budget for fiscal 2018 — nearly six months behind schedule. The outcome, as usual, was that Democrats get more social spending and Republicans get more military spending. The welfare-warfare state continues to metastasize — as does the debt required to fund it.

Given the tightness of the deadline, a few backbencher Republicans are grumbling about how there’s no time for them to read the bill. As if lawmakers are given adequate time to read any major piece of legislation anymore…

Let’s see if we’ve got this right: Great Britain is adopting “throwback” passports to coincide with its departure from the European Union… but they’ll be printed in France.

“A French company has won the contract to produce Britain’s new dark blue passports,” says the Financial Times, “leading to criticism from some Brexiters who had heralded the change of color as a symbol of the benefits of leaving the EU.”

De La Rue — a British company despite its French name — has produced Britain’s red passports for the last 10 years. But French security company Gemalto has won the bid to manufacture new dark-blue passports — a nod to passports from Great Britain’s pre-EU days. 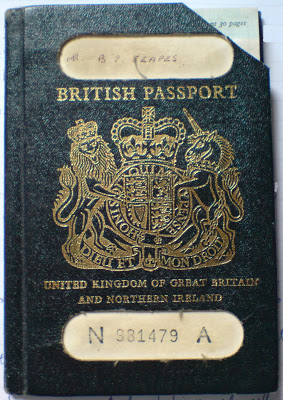 Martin Sutherland, De La Rue’s CEO, lashed out at Parliament, saying: “Over the last few months we have heard ministers happy to come on the media and talk about the new blue passport and the fact that it is an icon of British identity.

“But now this icon of British identity is going to be manufactured in France.”

Mr. Sutherland went on to invite Prime Minister Theresa May to “come to my factory and explain to our dedicated workforce why this is a sensible decision.”

Bill Cash — MP and pro-Brexit stalwart — summed up the government’s decision by calling it “incongruous to say the least” and “symbolically completely wrong.”

“I too am extremely concerned about the pension mess,” a reader writes, picking up on a topic from a while back.

“These outrageous promises were made by politicians pandering to large voting blocks. When the **** hits the fan they are long out of office, and I fear the taxpayer will be held accountable.

“What is the true cost of these pensions? By my estimates somewhere in the neighborhood of 20–25% of their salary. If they were forced to save that themselves, they couldn’t.

“There is a real possibility that these pensions are costing more than I, as a private citizen, can even contribute to my own retirement account. Somebody please do the math. Despite the promised benefit, how fair is that?

“If someone were to do the math, we surely would find that these pensions are better than the most generous 401(k) plan you could find.

“And apparently these benefits aren’t juicy enough. Some are spiking their final years with overtime to increase their retirement pay. In Los Angeles they are allowed to take their pension, keep the same job and then go out on disability. Collecting disability and retirement at the same time.

“By the way, my father retired from the fire department. His pension is 50% of his final salary. Somewhere along the line, we lost all sense of reality.

“The madness needs to stop.”

“I don’t understand the criticism of The 5 you published in a recent edition,” writes our final correspondent.

“It’s where I go to get the behind-the-scenes, nuanced view of what is going on in the financial markets. I have found no other source that tells it like The 5. If you have to put up with a little self-promotion, so be it. Long live The 5!”

The 5: We don’t mind the slings and arrows as long as we have happy readers like you.

P.S. As we write, the president is making his latest trade war announcement. He’s demanding China reduce its trade deficit with the United States by $100 billion.

But there’s an angle to the story you won’t see in the media coverage. Large amounts of money are starting to move in the markets as a result of it. And if you jump in now, it could mean a massive payout of 2,770% in only a few weeks. Check out the story before it becomes mainstream news and the profit potential vanishes.