The Quest for Next-Gen Cryptos

We already know Jim Rickards is not a bitcoin believer… and that’s putting it mildly.

He’s gone on record with the following:

You might remember Jamie Dimon — CEO of JP Morgan Chase — called out bitcoin as a “fraud.”

“It’s just not a real thing, eventually it [bitcoin] will be closed,” said Dimon at the Delivering Alpha conference in September. “It won’t end well. Someone is going to get killed.”

What you might not know is that while Dimon was weighing in on bitcoin, Bart Stephens — co-founder of venture capital firm Blockchain Capital — was speaking to JP Morgan fund managers and clients. The topic? Cryptocurrencies and blockchain technology. 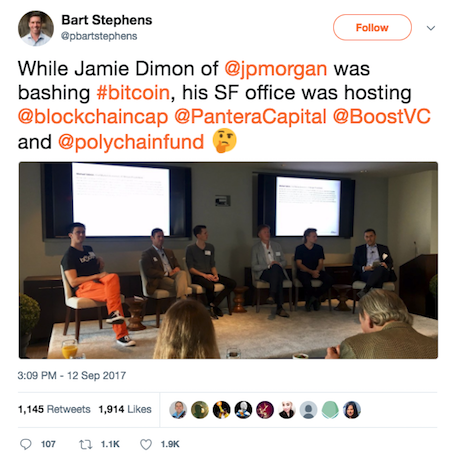 “The blockchain and cryptocurrencies have elicited an emotional response from financial incumbents,” said Stephens at Term Sheet. “The technology is controversial and misunderstood, but that doesn’t make it any less real.”

“A second wave or new generation of cryptocurrencies is now emerging with better governance models, more security and vastly improved ease of use,” says Jim.

“These new-wave coins represent the future of the cryptocurrency technology.”

It’s essential to identify the legitimate, mold-breaking cryptos from those that will end up in the digital-currency graveyard.

Jim’s worked out an analytic system to do just that… He calls it C.O.I.N.N.

We’ll flesh that out…

“Consensus refers to the fact that participants in a cryptocurrency community are able to select the trusted parties who will perform the blockchain validation function.” One reason Jim distrusts bitcoin is because it operates under what he calls the “tyranny of the miners.”

“Open Source refers to the fact that the source code for the relevant blockchain is freely available to all participants,” Jim explains. “This eliminates closed communities such as a central bank ‘FedCoin’ or an IMF-sponsored ‘SDRCoin’ and other permissioned systems.

“Impenetrable refers to the security of the relevant blockchain.” Back to “tyranny of the miners”: Bitcoin’s blockchain is defenseless to a mob of 51% of miners who could steal any or all existing bitcoins, place them in a new block and then authenticate the transaction. “An efficient coin,” says Jim, “would be immune to such attacks.

“No-Nonsense Governance refers to the technical method for validating a blockchain.” For example, bitcoin depends on unwieldy “proof-of-work” in the form of laborious math problems, requiring untenable amounts of processing and electrical power. “This is massively wasteful and inefficient,” Jim notes. “An efficient coin would allow reliable validation without such wasteful effort.

“Nimble refers to the ease of use of the coin,” says Jim. “Unless a cryptocurrency can offer payments transactions that are easier, faster and cheaper than existing systems such as Visa and MasterCard, it has no future as a currency,” he says. “The new-wave cryptos do offer this ease of use. Older cryptos don’t even come close.

“Today it can cost $60 to make a $50 payment in bitcoin, and the transaction can take hours to clear,” says Jim. “Obviously, that is not a suitable basis on which to promote a cryptocurrency that purports to compete with today’s giants of the payment industry.

“As these limitations become clearer, bitcoin’s price has started to come back to Earth.”

“Mature” cryptos like bitcoin, ether and ripple are showing their age. “Meanwhile, a new breed of cryptocurrencies is emerging…” Jim says.

These new cryptos have a lot going for them:

“The potential value of these new-wave cryptos can be measured by the current franchise value of the institutions that will be disrupted,” Jim explains. “If these cryptocurrencies can disintermediate centralized financial behemoths like Citibank and the New York Stock Exchange, their value can be measured in the trillions of dollars.

“Considering that some of the new-wave cryptos that pass our C.O.I.N.N. test are currently trading for pennies per coin, this could be the greatest investment opportunity since the invention of the railroads or electricity in the 19th century,” says Jim.

[Editor’s note: Jim Rickards wouldn’t jump on the cryptocurrency bandwagon until he developed his robust and reliable C.O.I.N.N. system. His system distinguishes between dead-end cryptos and compelling new cryptocurrencies with extraordinary growth potential… including this $0.70 coin. Even a small stake in this crypto has the potential to soar 1,000% in price. Take a look now, because the link goes away Saturday at midnight.

So… the trade-war freakout is over. At least for the moment.

Actually, depending on whom you listen to, it’s a trade war/tech stocks/economic growth/interest rates freakout. Regardless, as we write the Dow has recovered 60 of the 723 points it lost yesterday.

“We want to see how the week finishes from a trend perspective,” Alan Knuckman told us yesterday from the options trading pits in Chicago. “To take stocks higher, we’re looking for a break above 25,000. A drop below 24,600, though, could set stocks up for a bigger near-term drop.”

Yesterday the president declared a 25% tariff on about $60 billion worth of Chinese imports. For perspective, the United States imports $500 billion of goods and services from China each year.

The Chinese, meanwhile, announced tariffs on $3 billion of imports from the United States. That’s not in response to yesterday’s announcement by the White House but rather to the previous announcement of steel and aluminum tariffs.

Meanwhile, the president is threatening to veto the 2,232-page budget monstrosity that emerged from Congress yesterday — not because it’s a 2,232-page monstrosity but instead because it doesn’t deliver enough of what he wants with the border wall. A “partial government shutdown” still looms… but traders are shaking it off.

Last month, Broadcom offered to shell out $146 billion to acquire Qualcomm. “But that deal, as you probably heard, is dead,” Ray Blanco says.

Qualcomm is one of the most significant companies when it comes to advancing wireless technology globally. “Every past generation of wireless,” says Ray, “starting with analog and moving to 2G, 3G and current 4G, has been made possible thanks to technology developed at Qualcomm.”

“The death of the deal isn’t going to cool this active acquisition market,” Ray says, “and the best way to benefit is owning tech companies feeding the biggest trends in tech.

“Companies with leadership in augmented and virtual reality, car tech (including autonomous driving), artificial intelligence, 5G wireless and other white-hot tech trends are prime candidates for getting taken out by tech companies wanting a piece of that high-growth action.”

So Broadcom — and other companies like it — are still on the lookout for deals — without the geopolitical baggage!

Ray says, “We’ll be keeping an eye open for acquisition candidate tech companies. I expect 2018 will be a hot year for takeovers, raising the odds of us earning quick gains in quality tech names.”

Help Wanted: Do you have the right stuff? (The Russian space agency needs help disassembling ICBMs… You’ll never guess why.)

An article at RT reports the space agency “is looking for somebody to extract precious metals from decommissioned ICBMs [intercontinental ballistic missiles] stored at its facility.” Each missile can yield six ounces of gold, 150 ounces of silver and even a little bit of platinum.

“A commercial bidding website owned by the Russian government,” says RT, “has revealed the insight into what happens to the country’s nuclear-weapons carriers when they are no longer in use…

“The space agency offers about $170,000 to whoever is willing to scrap a batch of nine decommissioned RS-12M missiles, better known as Topol ICBMs.”

The nine scrapped missiles are stored at a facility in the town of Votkinsk in the Ural Mountains. The decommissioned ICBMs were delivered there in 2015 after their warheads and classified parts were removed.

“Each set of decommissioned missile components includes a transport container, three stages of the missile complete with inert engines, nozzle assemblies and compartments for guidance and control equipment, as well as pyrotechnics used for cold launch and plenty of cables.”

“Russian contractors can expect plenty of such contracts in years to come,” RT says. “The Russian Strategic Missile Troops will soon be decommissioning hundreds of outdated silo-based ICBMs of the R-36M family, dubbed ‘Satan’ by NATO.”

We’re sure some ambitious Russian outfit will take on the six-figure project — sifting out precious metals — and we’re gratified Russia recycles… heh.

To the mailbag, where pensions remain a hot topic: “Here in the U.K.,” a reader writes, “the Labor government designed a Ponzi scheme for our pensions, perpetuated by the current Conservative government

“I do not know how to get out of it. I am getting a 2.4% return where I could be getting a 9% return from government-backed bonds.

“Do not know what they are doing re my private pension. This too has been placed with an organization following government rulings that in effect is a Ponzi scheme.

“I see that as unemployment — that’s the trumped-up gummint number — goes down, inflation is expected.

“It seems to me that we have a large number of folks who have stopped looking for work and are still on the sidelines. If real wages are going up just a little bit, wouldn’t a few of these people come back into the workforce and thus prevent the inflation?

The 5: The most recent unemployment report from the Labor Department showed a big increase in the civilian workforce, while wage growth stagnated. You might be on to something!

P.S. Jim Rickards is a currency expert who wouldn’t jump on the bitcoin bandwagon… but he believes in the powerful potential of this second-generation crypto that trades for just about $0.70.

He’s so confident this tiny crypto will explode that he’s issuing a crazy 1,000% gains guarantee… but the clock’s ticking! Check it out now because the offer expires at MIDNIGHT on SATURDAY.