The SEC Warms up to Crypto ETFs?

Give Crypto a Chance!: The Chicago Board Options Exchange sends a plaintive letter to the SEC.

In a move Lloyd Dobler would approve… 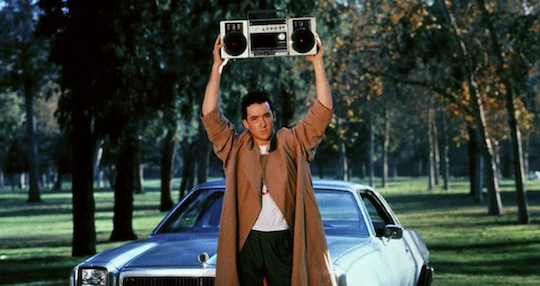 The CBOE dispatched a letter straight to the pooh-bahs of securities regulation, asking them to relax their approach to cryptos… crypto ETFs in particular.

(Their version — perhaps? — of standing beneath the SEC’s window, boombox blasting Peter Gabriel’s “In Your Eyes.”)

As it stands, according to an article at Cryptovest, “the SEC is not on the same wavelength as CBOE.” (We’re just not right for each other…)

“The SEC has already rejected dozens of proposals for ETFs, including CBOE application to launch several such funds.”

Their concerns? “The regulator [SEC] is concerned about the high volatility of bitcoin and cryptocurrency prices, the recent hacker attacks on crypto exchanges and the lack of concordance among governments regarding cryptocurrencies,” says Cryptovest.

Reasonable, right? But are the SEC’s reservations deal-breakers?

The CBOE’s letter, signed by company president Chris Concannon, says, “The vast majority of these concerns can be addressed within the existing framework for commodity-related funds related to valuation, liquidity, custody, arbitrage and manipulation.”

The letter suggests the SEC assess crypto ETFs on a case-by-case basis and emphasizes crypto’s market capitalization that can support such funds.

Overall, the CBOE “is confident that ETFs would provide investors with a more convenient and transparent way of trading cryptocurrencies than the spot market approach.”

We don’t yet know the SEC’s response to the CBOE’s proposal… But if the SEC warms up to the idea of crypto ETFs, that would be huge.

Will it be a wedded bliss for the SEC and crypto ETFs?

[Ed. note: You don’t have to wait for a government blessing before the next big crypto opportunity comes along. James Altucher recently spotted a screaming buy — for only $2 — with 800% profit potential in the weeks ahead.

How can he be so certain? Because he’s seen the same setup in other cryptos — including one that turned a $25,000 grubstake into a $1.8 million fortune. See James’ research for yourself right here — but don’t wait long, because it comes offline tomorrow night at midnight.]

To the more conventional markets, which are rebounding on this final trading day of the week. (The market’s closed tomorrow for Good Friday.)

The tech-heavy Nasdaq is back above 7,000 — up 1.25% as Alphabet (Google) and Facebook are rallying. (Amazon, not so much — not after the president tweet-torched AMZN overnight on the heels of that Axios story Dave mentioned yesterday.)

All in all, it’s been a disappointing first quarter of 2018 no matter what asset class you’re looking at… 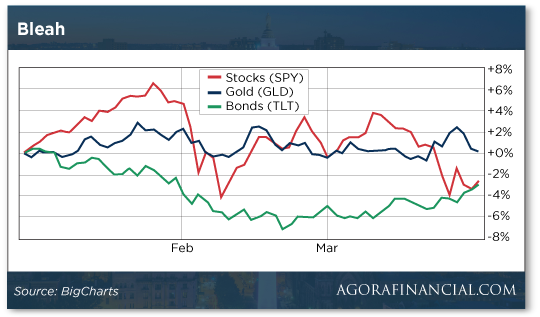 You know the extra money that working Americans got in their paychecks a few weeks ago thanks to the tax cut? They’re not spending it.

That’s the clear takeaway this morning from the Commerce Department’s “income and spend” report. Personal incomes grew 0.4% in February… but consumer spending grew only 0.2%. Those were the same numbers we got in January, by the way.

As a result, the personal saving rate continued the rise that began at the start of the year… 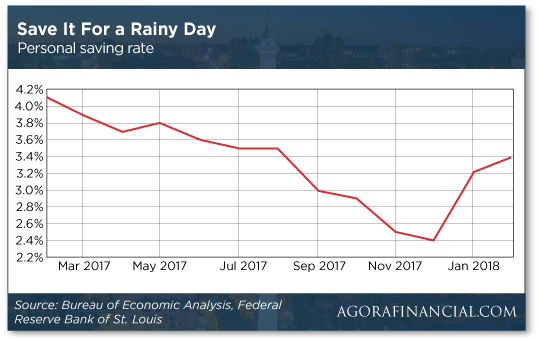 We’re not sure what to make of these numbers… but they don’t suggest the mighty American consumer is feeling confident about the future.

Also in today’s report — “core PCE,” the Federal Reserve’s preferred measure of inflation. After spending several months stuck at 1.5%, it’s now 1.6% — inching closer to the Fed’s 2% inflation target. That makes a June interest rate increase even more likely than it was before.

According to website Venezuelanalysis.com: “President Nicolás Maduro announced a series of economic reforms [last] Thursday in which he officially inaugurated the country’s new petro cryptocurrency…

“The cryptocurrency can be purchased in Chinese yuan, Turkish lira, euros, Russian rubles, as well as in other cryptocurrencies, including bitcoins, ethereums or litecoins…

“The petro had allegedly attracted presale interest from 133 countries worth $5 billion, figures which have attracted much attention in international financial circles.”

He announced the oil-backed petro as part of a comprehensive effort to restructure Venezuela’s tattered financial system and bypass sanctions imposed by the U.S. and EU.

“All of the state institutions that generate hard currency are instructed to immediately open petro wallets,” Maduro said, “They should start charging operations in petros.” 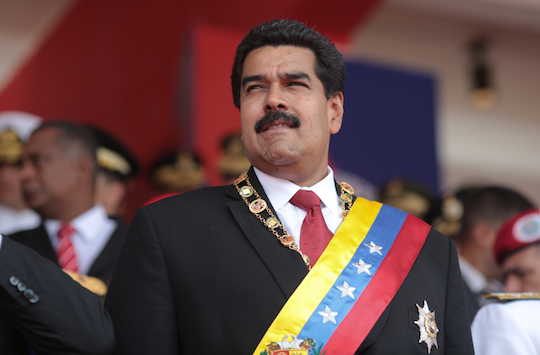 Maduro went on to say the petro will likely be used to pay for public transportation, tourism and real estate.

“Similarly, state-owned firms and mining companies, including Venezuelan state oil giant PDVSA, are due to start using the petro as a possible form of payment for their export taxes and workers’ salaries.

“State-run enterprises will also calculate their contributions to the public budget in petros.”

“He described the move as ‘a necessary monetary reconversion’ which looks to ‘defend the bolivar and the monetary and financial sovereignty of the country.’”

The real reason? It’s a last-ditch effort — similar to what his predecessor Hugo Chavez did in 2008 — to staunch sky-high inflation and cash shortages due to money smuggling out of Venezuela.

The sovereign bolivar will be hot off the presses June 4.

Venezuela might be the first to introduce a national crypto… but it won’t be the last. Who’s next?

A rough translation of Jahromi’s tweet says: “In a meeting with the board of directors of Post Bank on digital currencies based on the blockchain, I… prescribed… measures to implement the country’s first cloud-based digital currency.”

According to CNBC: “The Iran Front Page news site also reported the statement Wednesday and added that the Central Bank of Iran is cooperating with other institutions to control digital currencies in Iran.”

What does the White House think of the advent of these national currencies? Considering the source — Venezuela and Iran? — you can probably guess!

I’ll have more to say on that subject in Saturday’s issue… so stay tuned.

Guess what college students are buying with student loan money?

A study by website The School Loan Report finds college students using loan money to pay for more than just tuition, books and freshman-15-inducing cafeteria privileges. The study of 1,000 students uncovered that one in five students has used loan money to buy… cryptocurrency.

“They’re able to do so,” according to Fortune, “because some of those funds are used for ‘living expenses,’ a flexible category that covers myriad potential necessities.

“That college students are drawn to cryptocurrencies is hardly a surprise… interest in virtual currencies is at an all-time high, leading bitcoin, ethereum’s ether, ripple’s XRP and other such digital currencies to record levels of investment in 2017.”

Students are willing to gamble on crypto even though school loans for 2017–18 have an interest rate of 4–7% while bitcoin’s price has dropped 18% from its high-water mark in December.

“It certainly isn’t allowed per Department of Education regulations, since ‘living expenses’ must be related to education.”

Well, it could be argued one-fifth of surveyed students are getting an education… in volatility.

“Thank you so much for all your research and the great information that you share,” writes a newer reader.

“I had absolutely no knowledge of the stock market, the economy and how politics all affect each other. I have been learning so much from Strategic Intelligence, Technology Profits Confidential and The Seven Figure Formula.

“There is so much information and I am getting confused about how to invest or maybe I should wait because we are expecting a recession. I have two questions:

“1. My husband and I have 401(k)s. Because we are 44 and 46 years of age, we are aggressive in our investments. I have been reading about how we are expecting a recession. What should we do with our 401(k)s?

“2. And after reading about all the different investment opportunities, I have opened an account with Charles Schwab to start buying stocks. Again, not sure if I should wait until after the recession. Should I start buying the stocks that you are recommending now or wait? Thank you so much!”

The 5: We’re delighted you’re finding value in what we do. Those are great questions. Let’s take the second one first.

As maybe you’re figuring out, different editors have different opinions about the markets and the economy. Jim Rickards is wary of most stocks right now. Greg Guenthner and Jonas Elmerraji don’t worry much about the economy or company valuations; they focus more on the chart action. And Ray Blanco’s specialty is high-tech and biotech stocks, each with its own competitive advantage that he expects can withstand any shocks in the broader market and economy.

We don’t enforce a “company line” because we want our editors to air their ideas as freely as possible. The downside to that policy is that sometimes their ideas will conflict. In the end, it’s up to you to decide which editor’s ideas ring true the most for you and act accordingly.

As for your 401(k), that can be a tough one considering the limited investment choices available in many plans. Watch this space soon for an announcement about how to get our best guidance on that very topic. (It won’t cost you a thing — promise.)

P.S. U.S markets are closed tomorrow for Good Friday, so The 5 will be taking a long weekend. But we’ll still have our Saturday “countdown” edition, 5 Things You Need to Know, as usual. The weekday edition of The 5 returns on Monday.