The “Amazon Effect”? How about the “Trump Effect”?

Let’s see. Shares of Amazon are down 6.8% in less than three trading days. But to hear the mainstream tell it, everyone’s overreacting.

As we mentioned at the time, this all started on Wednesday when the political website Axios reported the president is “obsessed” with AMZN and is looking for some way to leverage the power of the federal government to knock down the company a peg or two.

But the mainstream reaction has been almost uniformly dismissive. A typical take: “Trump most likely won’t take on Amazon,” writes Pamela Danziger at Forbes. “As the most divisive president in my memory — and having come of age in the ’60s, I know about political contentiousness — Trump can’t afford to antagonize his base, who I am sure depend on Amazon just as much as those who oppose him.”

Since Wednesday, the president himself has unleashed a series of tweets, up to and including this morning… 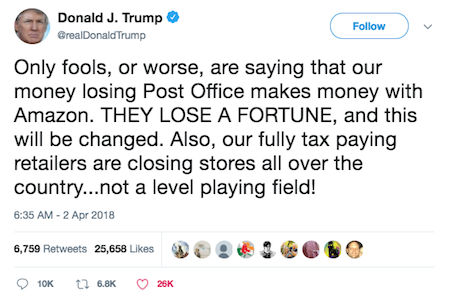 No, we’re not going to dig into the weeds of whether the Postal Service makes or loses money off Amazon.

But we will point out something we mentioned last year as the “retail apocalypse” was making headlines: Relative to the rest of the world, the United States is choking on square footage devoted to retail. By one estimate, America has three times the retail space of any other developed country. America has roughly 50 square feet of retail space for every man, woman and child. In Europe, it’s more like 10 square feet per capita. So it’s not all about Amazon.

If you read beyond the headlines, however, you can see that Trump’s threat to Amazon is way more than words.

Case in point — a Wall Street Journal article this morning that says “targeting Amazon on anticompetition grounds would be difficult, requiring an overturn of the principles that have guided U.S. antitrust enforcement for decades, policy experts say.”

But read deeper into the story and you learn about novel legal theories that the Justice Department could bring to bear, including one laid out by Lina Khan in the Yale Law Journal last year. “Her basic argument,” says the WSJ article, “is that antitrust framework has moved from looking at market structure to consumer welfare… She lays out an argument that if Amazon is practicing predatory pricing in various markets, that can squeeze competition even if it is good for consumers.”

That analysis lines up perfectly with indicators from Jim Rickards’ Project Prophesy system. “Trump could soon announce one of the most shocking decisions of 2018,” Jim tells us. “The administration could announce antitrust action against Amazon at any moment.”

Mere rumors of such action last summer delivered Jim’s readers a quick 32% gain. This time, he says the profit potential is much greater — as much as 400%.

Jim lays out the case at this link. There’s no long video to watch, but he says events are moving so quickly that the page could be out of date mere hours from now, and it would be too late to act. Check it out while the link is still active.

The second quarter of 2018 has begun with the Dow surrendering all of the gains it made on the final day of the first quarter.

The mainstream is also attributing the drop to Chinese tariffs on $3 billion worth of goods taking effect today. But near as we can tell, these were the same tariffs Beijing announced days ago. Why the shock?

Gold’s gyrations of last week are continuing into this week: At last check the Midas metal is up nearly 1% at $1,337.

The big economic number of the day is the ISM manufacturing index — less than expected, but still a very strong 59.3 for March. (Any number above 50 indicates a factory sector that’s growing.) Within the index, “input costs” are touching eight-year highs. That is, manufacturers are paying more for raw materials. The question is can they pass those higher costs along to consumers?

“In all my years of trading,” says crypto millionaire James Altucher, “the No. 1 thing I’ve learned is the importance of staying with good positions.”

His advice is apropos for the nascent crypto market as it is for traditional markets. “The most common trading mistake is overtrading,” James says.

James has gone on record — more than once — with advice to close the laptop. He believes following the day-to-day drama of the crypto market’s enough to make you crazy.

“I know well the desire and need for control when I check my portfolio and see it’s red on the day or week,” he says. “And yes, in some cases, it’s important to cut losses on bad investments early.

“But overall, the best investors have one thing in common: They hold for the long term,” James says. “So the market can panic all it wants. Leave that to the adrenaline junkies.”

Even with the price of bitcoin dropping below $7,000 over the weekend, James reminds investors: “We’re still in early innings for cryptocurrency. We’re here to build wealth by investing in long-term trends.”

“I continue to maintain my bullish outlook on our portfolio investments of ethereum and bitcoin,” James continues, “but advise my readers to hold off on initiating new purchases for the time being.”

“The North American legal cannabis market grew by a third to nearly $10 billion last year and is forecast to more than double in size by 2021,” according to ArcView Market Research.

With nine states already approving recreational marijuana and Canada set to do likewise on July 1, Wall Street’s turning its attention to opportunities that exist in this new “green” investing space.

A recent event in Manhattan “gave companies a soapbox to make pitches to potential investors.

“And the question everybody in this room should be asking is, ‘How do I make money?’”

And, right now, Ray’s keeping tabs on the spread of recreational pot on the East Coast.

“Recreational weed becomes legal in Massachusetts this July,” Ray says, “And predictably, lawmakers in neighboring Connecticut are getting antsy about lost revenue.”

“Massachusetts is expected to generate upward of $82 million a year from taxes in the next fiscal year,” he says, “a good chunk of which will likely come from Connecticut residents making a trip to the other side of the state line to do a little bit of ‘herbal tourism.’”

With a projected budget deficit of $260 million, Connecticut legislators have endorsed four bills to change the state’s marijuana laws; otherwise, tax money that might flow into Connecticut’s coffers will jump the state line to pot-friendly Massachusetts.

“Gov. Phil Murphy got elected in part on a pro-legalization campaign. And he’s pledged to get recreational pot legalized in the Garden State by the end of 2018.

“That environment will continue to spout incredible profit opportunities at home and abroad for us,” says Ray. “I’ll keep you updated as the story unfolds.”

On the topic of Trump and Amazon and overindebted real estate developers, a reader writes: “A similar thought crossed my mind after President Trump signed his $1.3 trillion spending boondoggle into law.

“He still has to maintain his real estate empire in Democrat-controlled cities and maybe this was his way of greasing the wheels of democracy. You know someday he has to return to his original job and you know well that he would never sacrifice it save to the country! That part about men with sacred honor, valor and sacrificing life and limb for freedom hasn’t existed in this country for a couple hundred years. Men like that certainly don’t exist in the swamp today.

“As you correctly point out, Venezuela won’t be the last country to introduce a national cryptocurrency,” begins today’s mailbag. “Who’s next?

“IMO it doesn’t matter — because nothing that happens in a socialist country can work. Before Venezuela became a dumpster fire, it was a poster child for progressives here in America. Now that it has descended into anarchy and mayhem, they don’t seem to mention it so much but they still keep touting the virtues of ‘Nordic social democracy’ (as if that’s better).

“Those would be the utopias that are on the same path but have not yet arrived at the deadly endgame. America is also on this path.

“When totalitarians are in charge, the many always suffer and die for the benefit of the few. That’s how the socialized version of ‘equality’ works. It ain’t complicated.

“Venezuela has the world’s largest oil reserve. It was a wealthy nation. It is now in absolute collapse as its people starve. This is another wake-up call, folks…

“So here’s my cynicism at work for today… :donning tinfoil hat:

“If Venezuela’s crypto actually takes off and is successful, bumping international monetary contr-… er, um, supervision out of the picture… how long before Venezuela becomes a ‘terrorist nation and threat to global security’?

The 5: Hmmm… The likelihood of success seems mighty slim. But yes, that’s surely the script the power elite will follow.

P.S. As the day wears on, the sell-off has accelerated — especially in Amazon. And the mainstream headlines are changing their tune: “Amazon Slumps After Another Round of Trump Rants,” says Bloomberg.

Of course, tweets are cheap — action is what matters. And Jim Rickards says action is coming sooner than almost anyone on Wall Street expects. When it does, a select few people will exploit the resulting volatility for gains of up to 400%.

It’s a fast-moving story: Jim urges you to check it out for yourself while there’s still time.