The email was time-stamped yesterday at 11:22 a.m. EDT. We reproduce it verbatim, to capture the immediacy and raw urgency with which it was sent…

The context: Less than two hours earlier, the Dow opened down 500 points. The trade-war jitters were cascading through global markets. But from his perch in the Chicago options trading pits, our Alan Knuckman observed action in “the tape” that told him it wouldn’t last.

Fifteen minutes after that email, the Nasdaq’s early losses turned into gains. The S&P 500 followed suit shortly after noon. The Dow was a laggard, but it too turned positive by 2:15… and that 500-point loss became a 230-point gain by day’s end.

Alan has been dismissive of the trade-war drama ever since it erupted at the beginning of March. Politics? He couldn’t care less. Again, from his email yesterday morning…

EARNINGS drive markets…two weeks from now will tell the tale

Not even two weeks. Earnings season “officially” gets underway a week from tomorrow when three of the Big Four commercial banks report their numbers.

We asked Alan to elaborate: After the ups and downs of the last two months, he says, “stocks are now trading at levels not seen since before President Trump’s signature tax cut.

“And with just a few weeks to go before earnings season kicks off, this is exactly where we want to be!

“S&P 500 earnings are expected to rise 17% in the second quarter. FactSet notes that analysts have upped their projections for first-quarter earnings by a whopping 5% since the start of the year. That’s a record jump!

“Once the market — and the media — get their first taste of post-tax cut corporate profits… we’ll soon stop talking about trade wars and likely see stocks soar once again,” Alan concludes.

“Fundamental facts will take center stage again when the next reporting season starts. Earnings growth drives stock prices, pure and simple — and they look to be extraordinary this quarter.”

Little wonder that Alan is pumped about the 42-day window of earnings season starting a week from tomorrow.

What’s more, it’s been six months since we launched his options-trading service keyed to earnings season — a service we cheekily call the 42-Day Retirement Plan. So far, he’s closed out 26 of his recommended trades… and all 26 have been winners.

That covers a four-month span in which the market was rising relentlessly… and a two-month span marked by huge volatility. But as Alan is wont to remind us, “Volatility equals opportunity.”

The present opportunity is so big, we recently pulled Alan away from his beloved home base in Chicago long enough to record a special interview in studios near our Baltimore headquarters. We encourage you to watch it now, before earnings season gets cranked up next week… 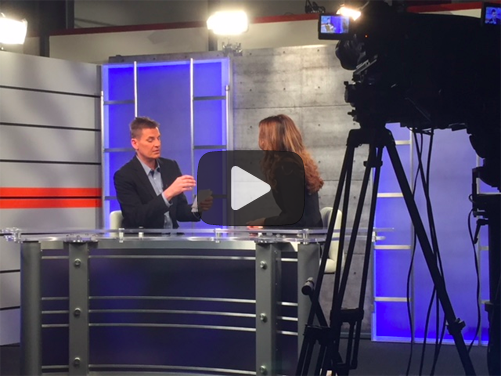 Yesterday’s good vibes in the stock market are stretching into today — with the Dow up another 250 points as we write.

The big economic number of the day is the trade deficit — which has been growing six straight months, now touching $57.6 billion. A widening trade gap is sure to put a hurt on first-quarter GDP numbers, due at the end of this month.

“With the market selling off, biotech has taken a big hit,” says our science-and-wealth authority Ray Blanco. “But there’s no reason to panic.

Ray says the February-March sell-off has nothing to do with the exciting news coming from the biotech sector.

There’s good reason, for example, for the market’s purge of FAANG stocks.

“And then there are Facebook’s woes as we get daily reveals about how Mark Zuckerberg’s social media giant is selling our private data to the highest bidder,” says Ray.

“But what’s it got to do with biotech?” he asks. “Nothing, really.”

What of the looming trade war? Ray says, “It doesn’t have that much of an effect on biotech.

“Whether or not there’s a trade war, the FDA is still the gatekeeper to the biggest biotech market of all… the United States. The lion’s share of most biotechs’ revenues is made right in the USA,” Ray explains.

“Plus, trade war or not, it’s doubtful many countries would block the importation of a brand-new patented drug with lifesaving properties. And since most big drug markets, like Europe, Japan or Canada, respect our intellectual property laws, they wouldn’t be able to flout them,” says Ray.

“If another major market really wanted to push the issue, manufacturing for that market could be moved if necessary.” Drug manufacturing only represents a tiny cut of a drug’s final cost — literally pennies of each dose.

“Biotech has still sold off,” Ray says. But… it’s “opening up a shot at buying exciting emerging names for cheap.

“Right now the Nasdaq Biotechnology Index is sitting near a level it’s bounced off multiple times over the past six months, suggesting that we’re at a good entry point for the sector.

“Fundamentally, we’re in a happy time for biotech,” says Ray.

“The FDA approved more new drugs last year than at any time over the past 20. It’s also approved over 1,000 generics — an all-time record — putting pressure on big pharmaceutical companies to partner with, or acquire, smaller biotechs with promising pipelines in order to make up revenues lost to new competition in older drugs,” he explains.

“On top of that, we’re in an exciting time for biotech, with the recent approvals of a new generation of cell-based therapies as well as gene therapies,” Ray says. “The nature of early-stage biotech is such that it can set us up for huge gains even when the market is down.

“Biotechnologies like these are going to open floodgates to a future stream of new approvals in previously untreated disease — that means big profits for us!”

As soon as Ray is ready to pull the trigger on a new opportunity in the biotech space, we’ll let you know.

“Some of our best Canadian stories are actually supernatural stories,” says Allison Crawford of the Canadian Mint.

“We wanted to share that story with the rest of the country.” 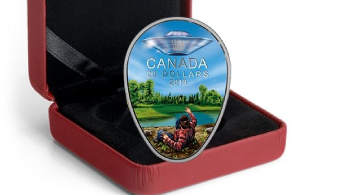 Apparently, there’s a lot of Canadian lore The Twilight Zone’s Rod Serling would’ve geeked out over.

One story comes from Manitoba when, in 1967, a man named Stefan Michalak was rock hunting and spotted some strange silver objects on the shore of Falcon Lake. When he touched one object, it was so hot it burned through his glove. Then the object shot into the air, leaving a trail of hot gas that caught Michalak’s clothes on fire.

“The perplexing incident has fascinated Manitobans for years,” says CTV News. “Investigations were carried out by the RCMP, the Canadian Forces and U.S. officials. None have conclusively determined what happened.

“Regardless, the Falcon Lake incident, as it’s come to be known, has cemented itself in Canadian lore for 51 years.

“So it seemed only natural to immortalize the event in a collectable coin,” says the article.

The $20 face-value coin retails for C$129.95 and is made of one ounce of pure silver. The coin also comes with a black light that — when placed behind the coin — reveals the yellow trail of gas that burned Michalak.

[Whether the coins retain their collector value is another question altogether; the Mint says it’s making only 4,000 of ’em.]

On the subject of a legal marijuana surplus out West, a reader writes, “The Oregon example seems to confirm the drug war can be won through forcing lower prices by legalizing and thus taking the exorbitant profit and crime out of the illegal trade, as long as high taxes and regulations don’t replace the racket.

“On the other hand it seems legalizing pot could be a sneaky way to accomplish gun regulations. Background checks revealing drug use disqualify applicants from buying a gun.”

The 5: Yes, we made that very point last fall — and again in December when the Honolulu Police Department started cross-checking lists of firearms licenses and medical-marijuana licenses, asking people on both lists to “voluntarily” turn in their guns.

The police backed down under public pressure… but the pusillanimous NRA still refuses to take a stand for the Second Amendment rights of dope smokers, on the twisted theory that such folk are not “law-abiding” gun owners in the eyes of the feds.

“I just read a 5 alert that told me all about an upcoming opportunity, which I clicked on, just to see if I wanted to know more. But I had to pay $2,000 just to get a link to start trading.

“What good is my membership with your company, which I bought into so that I could get started for as little as $100?

“I am going to go back through your other emails, and if this is the same on every email, I’ll have to terminate my membership.

“I got excited thinking I could invest in as little as $100 and start seeing profits.

“My husband is a combat-disabled veteran and I am also disabled, so we have to live on a fixed income. I thought this would help us have a better, brighter future and, as you said, was meant for us ‘little man’ people out there.

“I can’t believe you don’t offer some kind of payment plan or payment due after my investments make me $2,000.

“I think I ordered into a scam. Very disappointed.”

The 5: We took an entire episode of The 5 last month to explain who we are and what we’re all about.

We encourage you to give it a look, but in brief: You’re under no obligation to step up to a high-end service.

Indeed, if you’re on a fixed income and you’re just getting started with us, we urge you to stick with an entry-level newsletter for now. Ideally, the money you make following its recommendations will give you the means to step up to the higher-risk, higher-reward opportunities in the more expensive services.

P.S. Just how lucrative is the “42-day retirement window” mentioned above?

See what we mean when we say these 42 days could literally make your retirement?

The next window opens up a week from tomorrow. Check out this in-depth interview to learn how you can seize the moment.