Omens of a Late-Stage Boom

On Friday, the Nasdaq exchange suspended trading in LFIN — days after the company fessed up to “material weaknesses” and disclosed the Securities and Exchange Commission is on its case.

If you’ve ever had anything to do with a corporate audit, you know “material weakness” is a term you do not want to encounter. If you do, you move with all deliberate speed to resolve it ASAP so the auditors don’t start wondering if you’re another Enron or WorldCom in the making.

Then again, anyone exercising a modicum of critical thinking should have given the company’s public filings the side-eye.

As James said in this space three months ago, “I figured they were trying to squeeze in as many technology-related catchphrases as possible.”

It gets better. In the company’s S-1 filing, James encountered this: “Liquidity and Capital Resources: For LongFin, as of Feb. 28, 2017, we had cash of $75 and a working capital surplus of approximately $5,000, as the company is newly incorporated and does not have an operating history.”

James again: “Even my daughter has more than $75 locked away in her blue plastic piggy bank!”

LongFin’s short history as a publicly traded company — trading began only last December — has been marked by weirdness, to say nothing of wild moves… 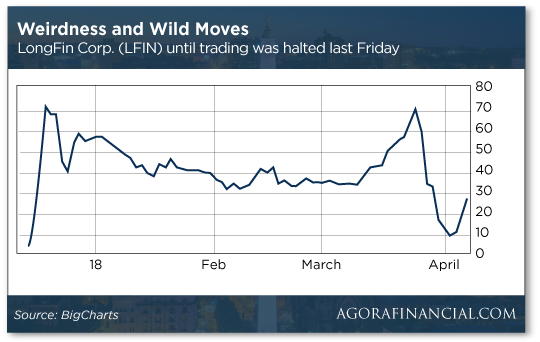 Only five days after going public, LFIN acquired a blockchain company called Ziddu — which had an equally squishy vision statement. That’s the first big spike on the chart. The big drop last month came after LFIN was removed from the small-cap Russell 2000 index.

Then came word of the investigation last week: “The SEC alleges that LongFin’s chief executive and associates effectively sold shares after the stock soared, in violation of securities rules, and it obtained a court order to freeze $27 million of the proceeds,” says The Wall Street Journal.

Incredibly, shares leaped 185% from Wednesday through Friday as CEO Venkat Meenavalli gave a nod to transparency by sitting down for an interview on CNBC. But then Nasdaq called its timeout on Friday. No doubt many day traders are sitting on paper profits… but what good are they if you can’t sell and cash in?

James’ takeaway back in January: “As exciting as it can be to invest in the latest and most significant technologies, it’s important to look behind the curtain now and again. Including the words ‘artificial intelligence,’ ‘machine learning’ and ‘blockchain’ in a company’s description does not mean that company’s stock is worthy of your investment dollars.”

[Ed. note: James just put the finishing touches on a strategy to collect instant income from cryptocurrencies. This strategy is effective no matter what’s going on with the price of cryptos… and you don’t even need access to the crypto exchanges. Yet the payouts can be immense — up to $3,000 a month, depending on how much capital you have to invest.

While the allegations of monkey business at LongFin are just allegations right now, they’re a reminder that fraud goes hand in hand with most market manias.

As we’ve been saying all year, we’re in the late boom phase of the boom-bust cycle. Already in this cycle we’ve had the case of Theranos — where even some of Silicon Valley’s best and brightest investors were taken in by founder Elizabeth Holmes’ illusory promise of cheap blood tests that could detect hundreds of diseases.

In the last cycle, massive fraud occurred both with home mortgages and the fancy securities those mortgages were bundled into for “sophisticated” investors.

And the dot-com bust was accompanied by the epic cases of Enron and WorldCom we mentioned earlier.

That’s not to say the next bust is imminent… but LongFin sure looks like a signpost on the road to that bust.

Another signpost on the way to the next bust — rising gasoline prices.

Every recession going back to the early 1970s has been preceded or accompanied by rising energy prices. And as “summer driving season” approaches, Americans will be facing the highest gasoline prices since 2014. Only last week, the U.S. Energy Department reported the average price for a gallon of regular unleaded is now $2.70 — the highest since 2015. 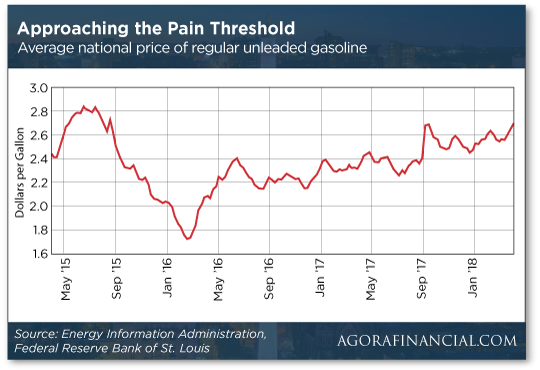 We’re getting mighty close to the pain threshold described here last month. AAA says for 20% of drivers, $2.75 gas is the point at which they’ll “change their driving habits or lifestyle.” For another 40%, it’s $3 a gallon.

That translates to less consumer spending — at a time retail sales have been falling for three straight months. Again, that’s a hallmark of a late-stage boom.

But in the meantime, the trade-war jitters are receding and Wall Street is in rally mode.

At last check, the Dow has reclaimed 300 of the 550 points it lost on Friday. Tech shares are recovering too, with Facebook up more than 1% and Apple, Alphabet and Amazon all rising at least 1.5%.

For the moment, gold is not assuming its role as a safe haven when the proverbial “geopolitical tensions” are ramping up.

Events related to Syria in recent days bear an eerie resemblance to events a year ago at this time. In late March, the Trump administration formally took regime change in Syria off the table. Days later, a chemical weapons attack took place that global elites pinned on the Assad regime in Syria despite a paucity of evidence. Trump ordered the launch of 59 missiles against Syrian regime targets. Global elites approved: “Donald Trump became president of the United States last night,” gushed CNN’s Fareed Zakaria.

Regime change was back on the table, even as Secretary of Defense James Mattis later acknowledged there’s “no evidence” the regime carried out the attack.

Fast-forward to late last month and Trump said he wants to withdraw U.S. troops from Syria “very soon” now that ISIS is on its heels. Days later, a chemical weapons attack took place that global elites pinned on the Assad regime despite a paucity of evidence.

Is there any doubt the outcome will be the same this time? Heck, is there any doubt U.S. troops will now be bogged down in Syria indefinitely? Retired diplomat Peter Van Buren sums up the preposterous state of play… 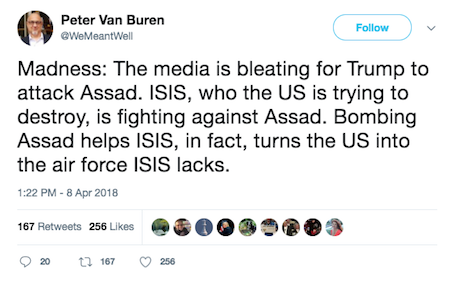 Anyway, gold got a meaningful bump once the missiles actually started flying last year. Expect the same tomorrow or Wednesday.

(There’s still more essential background about Syria in our episode published hours after those airstrikes last year. It’s stuff that neither Trump nor his Deep State opponents want you to know.)

Here it comes — New York’s too-clever-by-half attempt to get around the new federal tax law.

As you might be aware, the law caps the deduction for state/local income taxes and property taxes at a combined $10,000. That’s a raw deal for folks living in high-tax states like New York.

We told you in January that Gov. Andrew Cuomo was looking for a workaround. Recently, the legislature incorporated a workaround into the new state budget.

The nonpartisan Tax Foundation is not impressed. It warns New York taxpayers, “These avoidance schemes may increase your total tax liability. They might even get you audited.”

There are two workarounds, actually, as the Tax Foundation’s Jared Walczak explains: “One creates an employer-side payroll tax (which is deductible) with an offsetting employee-side income tax credit in the same amount. The other sets up funds for various public (and otherwise tax-supported) purposes, for which the taxpayer is supposed to be able to tax the charitable tax deduction, and offers a credit in a slightly lesser amount against income tax liability.”

Confusing? It’s worse than that, says Walczak. Few taxpayers will benefit from the payroll-tax scheme… and the IRS is unlikely to go along with the charitable-contribution scheme.

In any event, there’s now a test case. Grab the popcorn.

Stupid IRS tricks, Canadian edition: Reg Kane is trying to convince Canada’s version of the IRS that he’s not dead.

Mr. Kane is a 69-year-old widower from Howie Centre, Nova Scotia. After his wife’s death last year, he called the Canada Revenue Agency and asked what steps he needed to take. On the CRA’s advice, he applied for her death benefits and filed income taxes both for her and for himself.

Then came the benefits check in the mail last month — addressed not to his wife’s estate but to his. 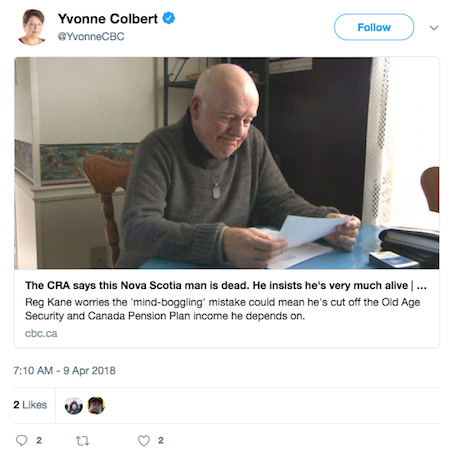 Adding insult to injury, “the check was accompanied by a notice of assessment that included incorrect income information,” reports Yvonne Colbert of CBC Television.

After a few phone calls, Kane thought he had everything ironed out… but two weeks ago he was on a follow-up call with a bureaucrat who told him that he was still listed as deceased.

Kane worries he’ll be cut off from both the Old Age Security and Canada Pension Plan in only three more weeks. “My understanding is it’s the month after you’re deceased that you’re cut off,” he says.

“It’s almost like they don’t care or they don’t have the empathy or they think it’s not important, and it hurts, it hurts me greatly, to be treated with a degree of indifference. I just don’t think that’s right.”

“I think you put too much credence in these Shadow Government Statistics guys,” a reader writes after our mention of the unemployment numbers.

“Just looking around, I’m not seeing what looks like Depression-era unemployment. I see a lot of help-wanted and hiring-now signs, in fact.

“Same with inflation. I remember the ’70s, when it seemed like prices were higher every time I went into a store. Not experiencing anything like that now, or for years prior. Real estate prices in some places (e.g., San Francisco), yeah, but not much else.”

The 5: You have to bear in mind that the unemployment rate is a percentage, or rather a fraction… and you can get a lower numerator by changing who qualifies to be included in that “100” denominator.

Millions of Americans have given up looking for work, and for whatever reason large numbers of them see no reason to start looking again. (One possible factor: The decline in “labor force participation” since 2000 coincides with a 60% increase in the number of people on Social Security Disability from 2000–2015.)

As for inflation, the present “real world” rate calculated by ShadowStats is a hair under 10%. That’s quite a bit lower than the March 1980 peak of 14.8%. And don’t forget, the current official numbers have a tendency to downplay costs of health care and higher education — the two things whose costs are rising the fastest.

P.S. Did you play it? On Friday, Ray Blanco urged his Technology Profits Confidential readers to bag a 103% gain on the industrial-automation firm Cognex.

If you missed out, Ray says the “next big thing” on his radar could be far more profitable… and it all gets started less than a month from now. Click here to learn about the biggest tech breakthrough since the birth of the internet.