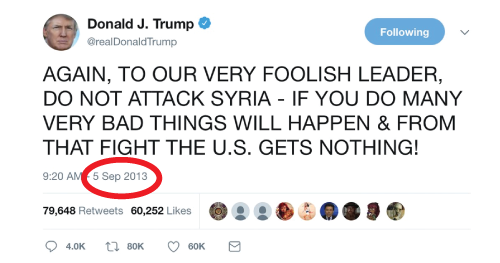 That was then, this is now: This morning the president tweeted at Russia to “get ready” for missile strikes on Syria — in areas where Russian troops are stationed and Moscow controls the airspace. Not surprisingly, the Dow plunged 200 points on the open.

The United States is about to carry out an act of war even though no attack on the United States is imminent, no obvious American interest is at stake and no authorization by the legislative branch has been given. And all this on the basis of allegations every bit as shaky as those of “Saddam’s weapons of mass destruction.”

What we’re witnessing this morning is Horton’s law in action.

Horton’s law is posited by our acquaintance Scott Horton — prolific radio and podcast host and author of the recently published Fool’s Errand: Time to End the War in Afghanistan.

The essence of Horton’s law is that you can always count on a political candidate to keep his worst promises… and break his best ones.

Trump’s best promise was to “get along” with Russia — the only other nuclear-armed superpower. As we said a few weeks before the election in 2016, U.S.-Russia relations are the paramount issue: The markets and the economy become rather secondary matters if the Earth is pockmarked with smoldering radioactive craters.

For having made that promise, Trump was labeled by Hillary Clinton as a “puppet” of Russian President Vladimir Putin. 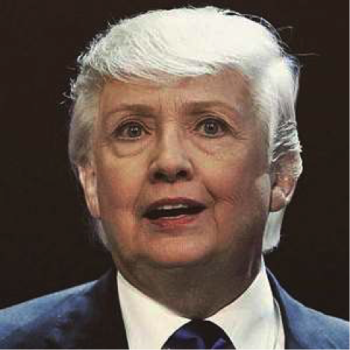 As Hillary said in a different context, what difference does it make?

And now at this moment in history, the power elite — the self-styled #Resistance Democrats and #NeverTrump Republicans — are embracing two contradictory ideas at once. 1) Trump is too unstable and erratic to be trusted in the role of commander-in-chief. 2) Trump must launch a war in Syria yesterday. Love it.

Here’s the crazy thing: Russian leaders predicted a month ago that it would all go down just like this.

Independent journalist Rick Sterling spotted this March 13 dispatch by the state news agency Tass: “Militants are preparing a provocation with the use of chemical agents in Syria to justify a massive U.S. strike against Damascus’ government neighborhoods, Chief of Russia’s General Staff Valery Gerasimov said on Tuesday.”

This morning, at least one mainstream news source acknowledges the risk that “U.S. airstrikes may inadvertently kill Russian soldiers in Syria and escalate the regional war into a confrontation between Washington and Moscow,” as the Los Angeles Times puts it.

We haven’t shared Knuckman’s law with you till now, and Alan Knuckman — our man in the Chicago options trading pits — doesn’t even call it by that name. But he has a rule of thumb: Don’t react to anything Trump says for 48 hours. Give events that much time to shake out.

He’s got a point, when you think about all the trade-war back-and-forth over the last six weeks. On one day, off the next. Really, it’s like someone love-struck, pulling petals off a flower… 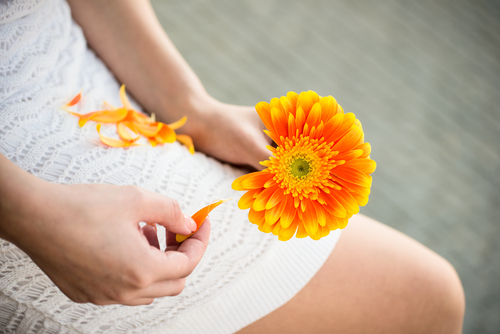 The Dow is down only 3% since the president started getting serious about the trade-war stuff on March 1. You don’t need rumblings of a trade war to get action in the tape like that.

As Alan’s been saying for days now, earnings are what ultimately drive stock prices. All the noise of recent weeks — a trade war, regulation of the internet giants, the slow-burn Mueller investigation — will take a back seat when first-quarter earnings season gets underway on Friday. Even the threat of the New Cold War turning hot will be jostling for traders’ attention with those all-important numbers.

What’s more, “They look to be increasing here in the future.

“I’m always optimistic about opportunity, and the more the markets move the more opportunities we have.

“I remain very bullish about the market direction… There are going to be opportunities.

“We’ve seen crisis du jour over and over again over the last eight years, and it has not been able to knock the market down,” Alan goes on. “I still think things remain positive.

“This is one of the best times in the last few years as far as the markets giving us these pullbacks that we can trade with and remain bullish. I like when we see these individual stocks or sectors have pullbacks. That, to me, is just opportunity once again. It’s about reward to risk and putting the odds in your favor.

“Eventually, the bull will run out of strength, but it hasn’t, and I don’t envision a day where it’s just going to go straight down. The market will probably pause and trade sideways for a period of time, and then we can start looking for opportunities on both the upside or the downside depending what the next move is.”

That’s an important point to recall now. Since we launched Alan’s earnings-driven trading service in early October, he’s closed out 27 trades… and all 27 are winners. (We said 26 yesterday; we’re privileged to correct the record today.) That includes a stretch when the market was going straight up… and the volatile phase that started in early February.

Crude is also reacting the way it should when Middle East tensions are ramping up. A barrel of West Texas Intermediate just crossed $67 — a level last seen the week after Thanksgiving 2014, when OPEC ministers shocked the world by refusing to cut production despite a growing oil glut.

The big economic number of the day is the consumer price index — down 0.1% in March. Hmmm… The producer price index released yesterday showed a 0.3% increase — which seems to indicate that businesses are still hesitant to pass their rising costs on to consumers. How long can that go on?

Among other things traders are chattering about — the announcement that House Speaker Paul Ryan won’t run for re-election. It’s brilliant timing — he’ll skitter out of D.C. a year before the policies he enacted will return Uncle Sam to trillion-dollar deficits. Good riddance. (We had his number as a phony fiscal conservative years ago, long before the likes of Drudge and Breitbart caught on.)

Late-stage boom cycle symptom: We knew homes were once again reaching the outside bounds of affordability, but this is ridiculous.

The mortgage-data outfit CoreLogic informs us that about one in five conventional mortgages issued this winter went to borrowers spending more than 45% of monthly income on debt. That’s mortgages, credit cards, student loans, everything. A year earlier, it was maybe one in 15 mortgages.

On the one hand, we’re not surprised — given the sluggish pace of wage growth. But we had no idea the lending standards were getting so lax again. Time was the hard-and-fast rule for mortgage lending was a 36% debt-to-income ratio. Of course, that got tossed on the heap during the mid-2000s housing bubble, but then lenders got way more conservative when the bubble burst. Guess that’s all over now…

Who’s behind these catchy ad campaigns… and how are they changing the way Americans eat?

Clever hooks like “Beef: It’s What’s for Dinner” and “Got Milk?” have become ubiquitous in pop culture since the 1990s. And you’ve probably heard the fast talk or read the fine print at the end of those advertisements: “Brought to you by the ad council…” (Yada, yada, yada.)

Come to find out there are 22 such “councils” — created by the U.S. Department of Agriculture — to promote things like beef, milk and eggs.

What you might not know is the money for those ads comes from mandatory fees paid by American farmers.

The return on investment is decent — on average, farmers get $9 for every dollar spent in advertising. But according to a Bloomberg article: “Some large producers balk at the fees… and have filed suit against the USDA.”

Know what else seems unfair? The odds seem stacked against American consumers when the USDA starts pushing products.

The Signature Slinger, as it’s called, was put on Sonic’s menu in March and — surprise — was created “with the help of the Mushroom Council.” 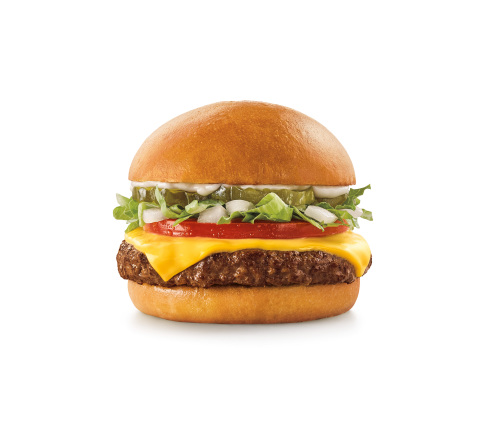 “Sonic had to figure out how to hawk them, said Scott Uehlein, vice president of product innovation and development at the 3,500-location chain,” Bloomberg says.

But coming in at just under 350 calories, the beefy mushroom hybrid allegedly “checks all the boxes” when it comes to giving consumers what they want — a healthier, low-cal option.

But who determines what consumers want? Are consumers driving demand — and shaping food culture — or are the USDA and their ad councils?

“I see a lot of help-wanted and hiring-now signs too,” writes a reader with a ground-truth report on the economy. “Full-time positions and of course the part-time slots. The problem is the wage.

“The manufacturing in my area on the average is between $10–13 per hour full or part time.

“Housing, transportation, health care, groceries… list goes on. Definitely need a partner or two or three with that kind of money.”

The 5: Yep. Back in late 2014 we took note of a study that showed manufacturing wages, adjusted for inflation, falling 4.4% over the previous decade. The decline was almost three times that experienced by the overall workforce. “Good manufacturing jobs” ain’t what they used to be.

And if inflation takes off in a serious way? Ouch.

P.S. Alan Knuckman does a lot of business TV interviews.

But recently he did a web interview for a very limited audience of readers like you… revealing something he’s never talked about on CNBC or elsewhere.

Hint: After tomorrow, the window of opportunity will have passed you by as earnings season will be underway.

Just what is it he’s talking about? And how much money could it mean to you? All is revealed in this interview. We’ll leave it online while it’s still current… but at midnight tomorrow night it comes down.