Why Gold Is Set To Crash Through the Ceiling

Gold begins a new week where it left off the old week, just under $1,350 an ounce — as if the airstrikes on Syria never happened.

Gold typically jumps when the proverbial “tensions in the Middle East” boil over — it’s the safe-haven trade. But the missiles were launched Friday night. Aside from cryptocurrencies, markets were closed and had no chance to react until last night… and by then it was old news.

In addition, the airstrikes weren’t as extensive as advertised.

As best we can piece it together, the story from Washington is this: Defense Secretary James Mattis counseled caution — wanting more evidence that the Syrian government, you know, actually carried out a chemical attack. National security adviser John Bolton, on the other hand, wanted to double down and hit not only Syrian government targets but also Iranian and even Russian forces in Syria. The president split the difference.

By dropping bombs on a third-world country, the president won at least momentary praise from the foreign policy establishment… 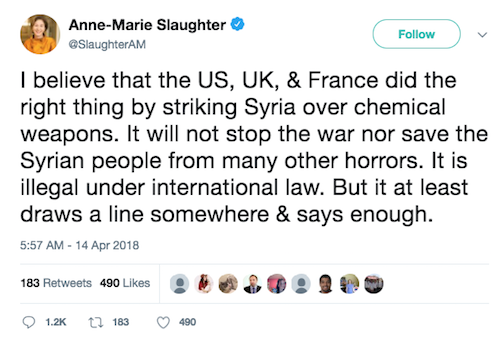 … while alienating a huge portion of his base. We didn’t see it, but we understand Alex Jones utterly lost his excrement Friday night.

What will the president do to get his base, as the Brits like to say, “on side” again?

We haven’t seen anyone else make the connection, but he launched a trade war in earnest with his announcement of steel and aluminum tariffs on March 1. That was literally a day after he stepped in it with his “take the guns first, go through due process second” remark.

What shiny-object distraction will we see today or tomorrow? (Then again, maybe the Comey book tour is enough to remind everyone of their tribal loyalties.)

To hear the mainstream tell it, gold is locked into a “tug of war” between two opposing forces.

“Some analysts and investors say the prospect of higher interest rates, which tend to buoy Treasury yields and make gold less attractive, has sucked the air out of the metal’s rallies this year.”

Here’s how we prefer to look at it: Gold’s performance under the circumstances has been nothing short of remarkable.

“Gold’s sideways performance this year is really a victory for investors,” says Jim Rickards, “considering that higher real interest rates would normally be expected to push gold lower, perhaps below the $1,300 per ounce level.”

That said, there appears to be a ceiling on gold right now around $1,365 an ounce. “Resistance” is the term the technicians use. 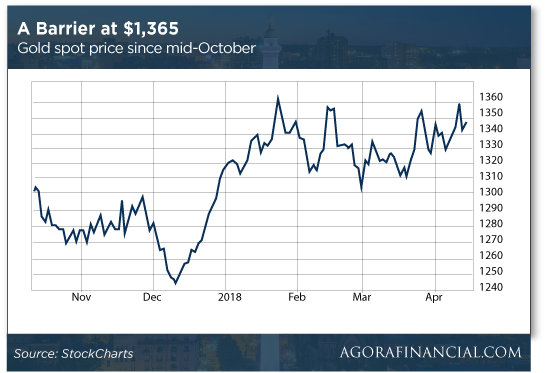 If gold can punch through that resistance level, a substantial rally is likely to follow. Maybe even $1,450, a level last seen five years ago.

And the key to whether gold can “break out” is the dollar.

Note this chart of gold and the Bloomberg U.S. Dollar Index. Unlike the “dollar index” commonly used by the financial media, Bloomberg’s isn’t as heavily skewed toward the euro and yen. So it’s a more revealing indicator of where the dollar is relative to other currencies.

On the chart, you can see that just as gold has a ceiling right now, Bloomberg’s U.S. Dollar Index has a floor… 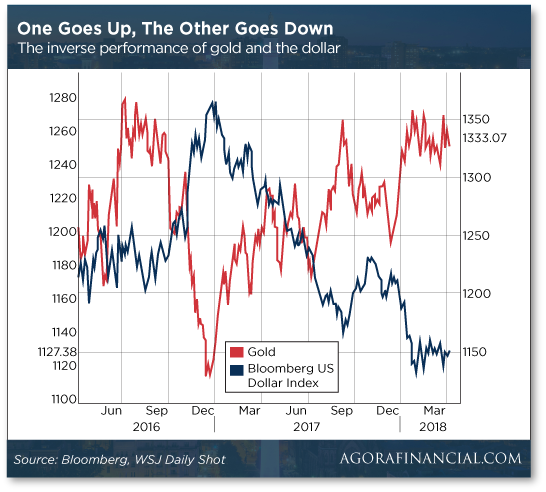 The dollar and gold won’t stay stuck in those ranges forever. So what can you expect?

“There are two powerful forces that indicate the dollar will break out to the downside,” says Jim — which points to a gold rally. “These forces are Fed policy and the trade wars.”

The Fed is in “tightening” mode. Not only is the Fed raising interest rates, but it’s also trying to reduce its bloated balance sheet — selling some of the Treasury debt and mortgage-backed securities the Fed accumulated after the Panic of 2008.

“The Fed’s balance sheet reduction policy, called quantitative tightening, or QT, has never been tried before in the 105-year history of the Fed,” says Jim. “It is highly likely that the Fed is underestimating the tightening impact of QT, especially when QT is joined with actual rate hikes.”

For months, Jim has contended this tightening effort will put the brakes on economic growth, the stock market rally or both. At that point, the Fed would have to change course. “Loose” monetary policy is great for gold.

Meanwhile, don’t forget the fact that the White House wants a cheaper dollar.

“A cheaper dollar raises the price of imports,” Jim explains, “which feeds inflation into the U.S. supply chain. It also makes exports more competitive, which creates real growth and jobs.

“The White House and the U.S. Treasury have both expressed support for a weaker dollar. History shows that when it comes to weakness or strength in the dollar, the White House usually gets what it wants.”

Conclusion: “The sideways price action in the dollar and gold may continue for a few more months. But eventually, slow growth will become a political problem for the White House and a monetary problem for the Fed.

“At that point, a pause in rate hikes by the Fed and some weak dollar jawboning from the White House will send the dollar plunging again as it did in the first half of 2017. When that happens, gold will soar.”

As for stocks, the major U.S. indexes are recovering all the ground they lost on Friday and then some.

Earnings season began on Friday, with three of the Big Four commercial banks reporting good numbers, thanks in part to the new tax law. But traders fretted about the growth of the banks’ loan portfolios, or lack thereof. That sent the Dow down 120 points on the day.

This morning the last of the Big Four reported. Bank of America delivered perfectly fine earnings numbers — and respectable growth in its loan book. Lo and behold, the Dow is up 200 as we write.

Now for a longer-term look at the stock market… 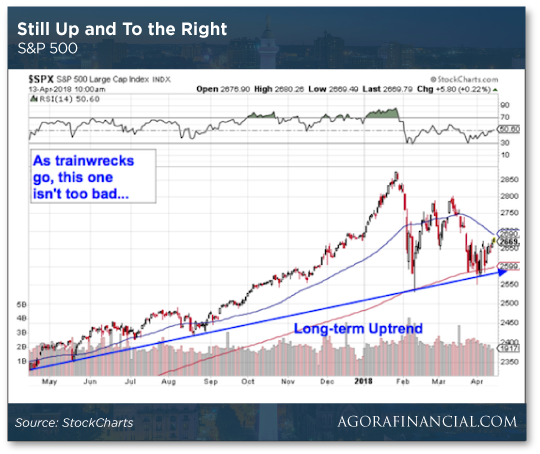 Take note of the straight blue line. Our resident quant Jonas Elmerraji sends along this chart. Jonas doesn’t do a whole lot of old-school chart analysis these days after having designed his own proprietary trading platform… but he spent last week among many chart-watchers at the Chartered Market Technician Association’s annual shindig in New York.

“2018’s market correction has stressed investors out,” he says. “As volatility continues to spike, right now many feel like we’re in a disaster of a market.

“Well, taking a look at the chart above, as train wrecks go, this one isn’t too bad. Price is still pointing up and to the right. We’re bouncing off of our long-term trendline. Buyers are still in control.

And it happens to jibe with the data spit out by Jonas’ own algorithm. “When different approaches reach the same conclusion, that’s a very good thing.”

Crude is backing off its highs of Friday, but not much. A barrel of West Texas Intermediate still fetches $66.72.

Go figure: Once again Donald Trump doesn’t mind a “globalist” institution if he can use it to pursue economic war with China.

On Friday, we related Trump’s suddenly renewed interest in the Trans-Pacific Partnership. On the surface it made no sense, but we explained how joining a multination “free trade agreement” served his purposes because TPP was designed to exclude China.

Now comes word that the White House is about to boost its support for the World Bank by $13 billion. “The move would be a significant shift in the U.S. administration’s attitudes toward multilateral institutions,” says the Financial Times.

Or it could be just another anti-China gambit. The money is conditional on the World Bank boosting the percentage of loans issued to poorer countries. “Countries such as China will be moved into a bracket with higher interest rates for wealthier states,” reports the London-based China Economic Review. 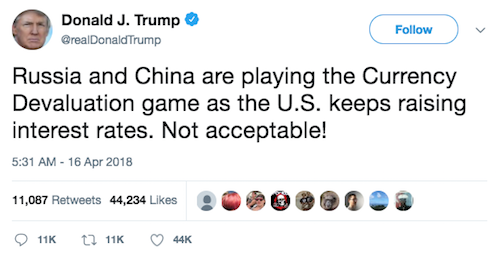 Uhhh… Has he looked at a chart of the Chinese currency since he took office? 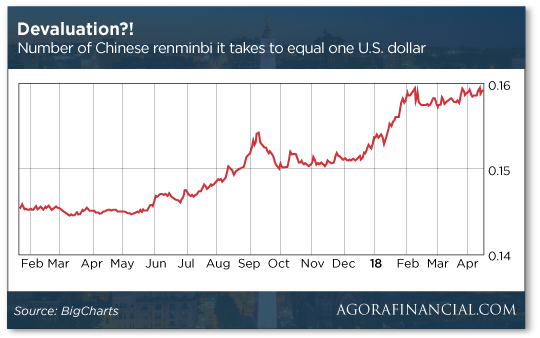 As for the ruble, it’s been fairly stable relative to the dollar the last 15 months… until last week when it tanked after the U.S. administration imposed a new round of sanctions on a handful of wealthy Russians.

Bitcoin hovers a hair below $8,000 this morning — holding onto most of its gains from a monster 16% rally in the space of a half-hour last week.

After a, uhh, challenging first quarter for cryptocurrencies, “It now appears that the tide is turning as professional investors begin taking their seats at the table,” says James Altucher.

“In the past few weeks, several deep-pocketed investors have begun investing in cryptocurrency, including George Soros, the fund that manages money for the Rockefeller family and other well-known names.

“Apart from the low price, institutional investors appear to be motivated by the technological innovation happening with cryptocurrencies.”

It comes back to something James has mentioned in these virtual pages before: “Bitcoin (and cryptocurrency in general) is currently undergoing an important evolution from an unregulated, get-rich-quick casino game into a useful, reliable and powerful tool for facilitating trade and commerce.”

We don’t do much personal finance stuff around here, but we’ll offer a pro tip today: When selling a vehicle, hang onto the paperwork for a few years to prove the transaction took place.

Last year, New York City residents Bob and Sandi Durrell got a notice in the mail informing them they owed $100 in back parking tickets — even though, living in Manhattan, they don’t own a car.

Now, they did own a car at one time, but they sold it in 2013. And they made sure to follow the draconian laws of states like New York and Maryland — where you have to physically turn in the license plates to the DMV.

Sure enough, bureaucracy being bureaucracy, the tickets were for a car bearing their old license plate number.

But the Durrells retained their records and sent in the bill of sale — along with the receipt they got when they returned the plates.

The city forgave one ticket, but it was only with the intervention of the consumer reporter at WPIX-TV that the city also backed down on the other one. Oy…

“SHOCKING BOMBSHELL,” reads the subject line of an entry in our mailbag.

“Please,” the reader implores, “don’t contribute to diluting the meaning of these terms.

“Every other report is announced as ‘shocking’ or a ‘bombshell’ but turns out to be neither. ‘Shocking’ is overused in promoting many of your publications.”

The 5: Agreed. Words that once grabbed a reader’s attention lose their impact with overuse and the passage of time. They become a copywriter’s crutch.

P.S. Have you heard of “Trump bonus checks?”

They’re a special carve-out tucked within a legal document signed into law by the president. This “loophole” allows everyday Americans to collect regular checks of as much as $8,131 a month.

The next round of payments is due four weeks from today. We’ll tell you more about them later this week, but if we’ve piqued your curiosity, you can get the scoop right here.