A few weeks ago General Mills warned shareholders that its freight costs had soared to highs last seen in the late 1990s. Inevitably, those higher costs will be passed along to consumers.

As it turns out, there’s intense competition these days moving goods from here to there. Between truck, rail, air cargo and barges… U.S. shipping volumes have leaped 11.9% in just the past year. That’s according to the Cass Freight Index — a measurement that now sits at a level last seen in 2007. The blue line on this chart is for this year… 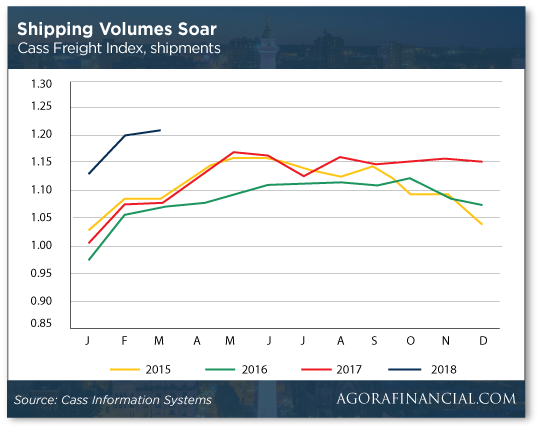 Cass’ researchers tell us there was a “freight recession” in 2015–16… when freight volumes were declining on a year-over-year basis. But not anymore. “Volume has continued to grow at such a pace that capacity in most modes has become extraordinarily tight,” they write. “In turn, pricing power has erupted in those modes.”

But where are the best places to invest at this moment? What sectors of the economy will benefit most?

For answers, we turn today to Agora Financial income authority Zach Scheidt. But before we get to those answers, we need to tell you how he arrived at them.

It goes back to his days working for a hedge fund — managing $20 million in client accounts, and $20 million more of the company’s funds.

“As I watched friends and family struggle to make money,” he tells us, “I had a front-row seat for just how much Wall Street is rigged in favor of the ultra-wealthy.

“I had access to an endless array of analytical tools, from a complete library of historical financial data to some of the most sophisticated computer systems ever developed. But there was one item in particular that gave me a definitive edge over anyone else — the squawk box.”

We’ve mentioned the squawk box once or twice before. But it’s such a powerful tool, it’s worth bringing up again.

“It was a special speaker tied into a major brokerage firm’s communications network,” Zach explains. “While I didn’t work for the company, my boss’s special connections got me access. I was able to hear everything the company told its employees… from research reports to trading instructions.”

A quick example of the squawk box’s power: On one occasion, a trendy communications company had just gone public. Zach had a sizeable chunk of his fund’s money invested in the firm.

“Then the squawk box informed me that one of the brokerage’s big clients had decided to liquidate its position in the up-and-coming company,” He recalls. “Brokers were told to find buyers so the client could liquidate their position as soon as possible.

“If a major investor was bailing out, clearly something was going wrong. So I sold my hedge fund’s position in the stock as soon as the market opened. We locked in a quick profit before the brokers’ sell orders pushed the share price lower.

“If I had held on any longer, we would have had a major loss on our hands. Thanks to the squawk box, my wealthy clients became even wealthier.”

“It felt great at the time… but now I can’t help but think how unfair it was to everyone else,” Zach goes on.

“Imagine if you had been holding the stock that everyone was convinced had a bright future. How would you feel when its price suddenly collapsed?

“Even worse, what if you only owned the stock because your broker encouraged you to buy it? You had no way to know he was just trying to dump his more valuable clients’ shares on you. Instead, you might have thought he was giving you a chance to grab a piece of a shooting star at a great price.

“Keep in mind, none of this was illegal. Even my privilege of listening in to the brokerage’s system was aboveboard. It was just Wall Street business as usual — where the wealthy had an unfair advantage over everyday investors.”

Nowadays, Zach looks to even those odds. And earlier this year, he took his biggest step yet to level the playing field — developing his own version of the squawk box, accessible to regular Americans.

“I dig deep for the subtle signs that elite traders are acting on information the rest of us don’t know,” he explains.

“Two of the biggest tip-offs are specific shifts in a stock’s price and volume as well as signs of unusual activity in stock options. I gauge price and volume using a single mathematical indicator. It gives me a more complete picture than indicators that focus on one or the other. Monitoring the options market means looking for sudden trading upticks that could mean a stock is about to move.”

For obvious reasons, we’re reserving his specific plays for subscribers to Zach’s Weekly Squawk Box. But what we can do is tell you about four broad sectors where he sees tremendous opportunity. All of them will thrive during this late boom phase we talked about earlier…

Zach is on the trail of specific names in each of these sectors poised for big moves. And he’s keen to send you your own little black box — where you can be clued in on the hottest opportunities based on those “subtle signs” he just talked about.

However, he has only a limited number of boxes available. If you don’t act by midnight tonight, your opportunity will have passed you by… and we can’t say when they’ll be available again. Click here and learn how to seize the moment.

Stocks are rallying on this hump day, but it’s technology and small caps taking the lead.

The Nasdaq is up nearly half a percent as we write at 7,312. The small-cap Russell 2000 is up more than half a percent. In contrast, the Dow is treading water just below 24,800.

“Oil has made a complete comeback, rising to three-year highs and closing in on $70 a barrel,” Alan Knuckman tells us from his perch in the Chicago options trading pits.

“The next objective is $75, based on the ‘V’ recovery from the recent dip.”

In fact, Alan says it might be energy names that drive the next leg up in the stock market. “It is difficult to see a drop in ‘black gold’ anytime soon,” he says. “Global growth demand is sopping up the new U.S. production.”

Rising oil prices are also characteristic of the late boom phase in the boom-bust cycle, we hasten to add. Eventually they rise to a point that it puts a squeeze on economic growth. We’re not there yet… although as we’ve said before, $2.75 gasoline is the pain point at which 20% of drivers say they’ll either drive less or cut back on other expenses.

In the annals of cryptocurrency crime, Sindri Thor Stefansson is sure to hold a hallowed place — a prison break and an escape aboard a prime minister’s jet.

It’s not a Hollywood thriller. Instead it’s a heist, a jailbreak and — now — a manhunt.

In February, 22 people were rounded up in Iceland, suspected of stealing 600 computers from a bitcoin mining operation. (Iceland is a hotbed of crypto mining, thanks to cheap geothermal electricity.)

Accused mastermind Sindri Thor Stefansson was cooling his heels in a low-security prison when he “Shawshanked” his way to freedom. 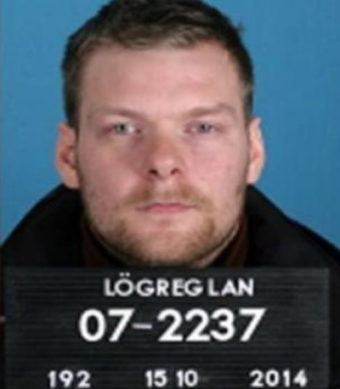 OK, it wasn’t quite that dramatic: The Icelandic prison was so low-security that inmates (government guests?) had access to cellphones and internet. Not to mention the institution is called an “open prison.” (And we make jokes in this country about “Club Fed.”)

Stefansson simply shimmied out a window and made his way to the nearest airport about 59 miles away. Using someone else’s passport, he hopped a plane to Sweden on Tuesday… and disappeared.

“He had an accomplice,” said Police Chief Gunnar Schram, “We are sure of that.”

A real Sherlock, that one. Heh.

And the plot thickens… The BBC reports the suspect was on the same flight as Iceland’s Prime Minister Katrín Jakobsdóttir. For real.

An international warrant’s been issued for Stefansson’s arrest. And when he’s arrested, we’re fairly certain Stefansson will go to prison… with higher security.

“I can remember when Tax Freedom Day (on average) came in May,” a reader writes after yesterday’s 5. “This was in the late ’60s!”

The 5: Hmmm… Far be it from us to question your recollection, but the Tax Foundation says the latest that Tax Freedom Day ever fell was on May 1, and that was much more recently — in 2000. 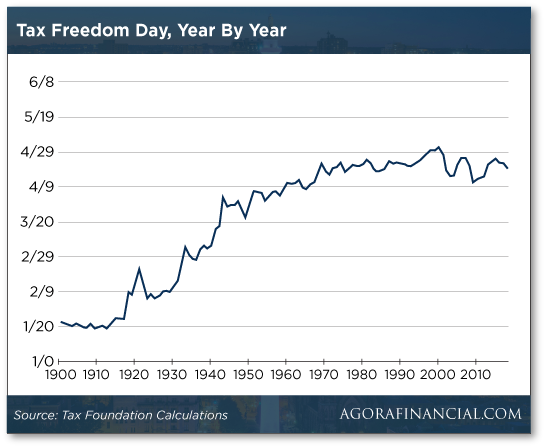 “Dave, the even bigger problem is that Tuesday was tax f***over day,” writes one of our regulars.

“After deductions, I just sent 26.3% of my income to the federal government and another 5.1% to the People’s Republic of New York. Not bad for an adjusted gross of $46K, eh?

“So Americans spend more on taxes than they do on food, clothing and shelter. Incredibly, we can add health care to the list despite the grand rip-off that has become: I also forked over 10% of my income for Obamacare premiums in 2017 (up more than one-third from 2016). It’s mind-numbing — yet I pay almost three times this much to fund the profligate spending of governments that are doing this to us in the first place.

“You can’t make up this stuff.

“Anyway I’m still chuckling about the reader you mentioned on April 9 who ‘thinks you put too much credence in these Shadow Government Statistics guys.’ As you correctly pointed out, the official numbers tend to downplay the costs of health care and higher education — where consumer prices are going ballistic.”

The 5: Way back when, we spoke of “the three H’s” — health care, higher education and housing.

When the Bureau of Labor Statistics calculates housing costs in the official inflation numbers, it relies on something called “owners’ equivalent rent” — that is, the rent you’d collect if you were leasing your home to yourself. (What can we say, this is government we’re talking about.)

During the housing bubble, this methodology had the effect of low-balling housing costs and the overall inflation number.

Key point: Like health care and higher ed, housing prices in the mid-2000s were thrown completely out of whack by government meddling.

Now, you wonder? Well, Zillow tells us the median home price is $210,200. The Census Bureau tells us median household income is $59,039. So the typical home costs about 3.6 times median income. Not as bad as the 5.1 times peak reached in 2006… but also not the two times ratio that personal-finance gurus told us was prudent back in the day…

P.S. Last chance: Zach Scheidt’s supply of little black boxes — your entry to some of the most powerful trading cues from stock market insiders — is nearly exhausted.

If you want a shot at gains of over $16,000 per week, your chance is almost gone. Click here before the offer comes off the table at midnight tonight.