Long on Life, Short on Savings

The good news is Americans are living longer. The bad news is many of them won’t have the funds to enjoy those extra years. Longer life expectancies might be the death of retirement accounts.

It’s morbid to talk about — er, morbidity — but crucial when planning for retirement.

“Fifty years ago, most Americans shared a common view of retirement,” says a blog post at Fidelity’s website. “You left the 9-to-5 job and transitioned into your ‘golden years,’ a period of roughly 10–15 years…

“Now it’s hard to say what retirement is. For many it can stretch 30 years or more.”

Here’s the rub: “Most people can’t save enough in 40 years of working to support themselves for 30 or more years of not working,” says Laura Carstensen, director of the Stanford Center on Longevity.

So — and this is awkward — what’s your projected life expectancy? Here’s a handy calculator from the Social Security Administration to get an idea. (If you want to check, make sure you come back here as soon as you’re done. We don’t want you to lose hope…)

Now… how to plan?

An article at The Washington Post says, “The best thing you can do is save as much as you can in anticipation of a long life.”

But not many people — for whatever reason — are taking that advice. A GoBankingRates survey shows 42% of American have $10,000 or less saved for retirement.

The Post goes on to ask: “Are you afraid of outliving your retirement savings?”

And if you think Social Security’s a viable retirement safety net — think again.

Mike Burnick — a new contributor here at Agora Financial — notes, “Most retired Americans depend on Social Security as their primary source of retirement income.

“Among recipients age 65 and older, 50% of married couples and 71% of unmarried people get more than half of their retirement income from Social Security,” Mike says, citing stats at the SSA’s website.

“Even more frightening is that 23% of married elderly couples and 43% of unmarried elderly persons get more than 90% of their income from Social Security.”

Mike has 25 years of experience as a Registered Investment Adviser and portfolio manager. In 2008, he was named director of research and client communications at Weiss Capital Management, where he assisted managing the day-to-day asset allocation and trading responsibilities for a $5 million ETF strategy.

After years advising clients about saving for retirement, take Mike’s word for it: “The reality is that Social Security alone just isn’t going to cut it, and it is up to YOU to save.

To bridge the retirement gap, Mike gives some sound advice…

To those who’ve yet to retire, Mike says, “Grab the free money!

“If your employer offers a retirement savings plan like a 401(k), 403(b), 457 or IRA, set up an appointment with the human resources department today.

“Specifically, ask about the company’s matching (free money) and make sure you get that free money. The most common matching program is 50 cents of each dollar you contribute up to the first 6%. In short, you put in 6% and your employer will kick in another (free) 3%.”

In other words, don’t leave free money on the table… and 51% of Americans do by failing to contribute to an employer-sponsored 401(k).

If you’re already retired, “Be a better investor!”

Mike says, “The least painful way to accumulate a bigger nest egg is to become a better investor.

“It’s time to ask yourself how you can improve your investment results.

“And that is exactly what a carefully selected basket of dividend-paying stocks will do for you.

“My point is simple,” he goes on to say: “Dividend-paying stocks have substantially less volatility than the overall stock market and are one of the best ways to protect your portfolio and substantially grow your wealth during down market days.”

[Ed. note: Mike says there’s no better time than now to seize on a handful of dividend payers handing investors what he calls “Trump bonus checks” — made possible by the new tax law.]

The payouts can be as high as $8,181 per month. And the next payouts are due May 14. Mike explains how they work when you follow this link.

To the markets… where almost nothing is making money today.

Major U.S. stock indexes are all in the red, the tech-heavy Nasdaq taking the biggest hit. Shortly before the open, a major semiconductor supplier to Apple and Nvidia cut its outlook, citing “softening” demand for high-end smartphones and cryptocurrency mining.

But there’s no safety trade today. Bond prices are falling, sending yields higher. The 10-year Treasury yield is up to 2.92%. Gold has backed down to $1,344.

AAA says the national average gasoline price is up to $2.74. That’s a penny away from the $2.75 level where 20% of drivers surveyed tell AAA they’ll either drive less or cut back on other expenses.

A new report from Deutsche Bank says a jump to $3.70 a gallon — the level of summer 2014 — would consume all the extra disposable income a typical consumer got when the federal income tax cut took effect in January.

A Chicago suburb — Harvey, Illinois — might be the first domino to fall in the state’s pension fund crisis.

“While an extreme case at the moment,” says an article at Illinois Policy, “Harvey is a harrowing sign of things to come for local governments across the state, where residents are increasingly seeing pension costs crowd out core services.

“An appellate court decision in 2017 found that the Harvey firefighters’ pension fund was so close to being functionally bankrupt that payments to the fund were legally required under the Illinois Constitution, which guarantees pension benefits.”

Decades of wrongheaded — and sometime illegal — decision-making left Harvey’s firefighters’ pension funded at just 22% as of 2016.

And here come the pink slips: “City officials confirmed that layoffs to police, fire and other departments would be necessary to cover a court-ordered pension payment.” It’s believed 18 firefighters and 13 police officers have already been laid off, according to the Daily Southtown.

“The story of Harvey should be a cautionary tale for the state of Illinois as a whole,” the article continues. “The unfunded pension liability for state pension funds — to say nothing of local pension debt such as Harvey’s — is between $130 billion and $250 billion…

“This problem is mirrored in local governments across the state, where hundreds of millions of dollars in additional taxpayer contributions have not been able to keep up with the rapid growth in pension benefits.

“Ultimately, the lesson to take away from Harvey is that defined-benefit pension systems are unsustainable.”

“China is taking its first steps toward paying for imported crude oil in yuan instead of the U.S. dollar,” says an article at Reuters — picking up on a topic we alerted you to last year.

This is a “key development in Beijing’s efforts to establish its currency internationally.”

China was second only to the U.S. in oil consumption last year but exceeded the U.S. as the biggest oil importer.

“Being the biggest buyer of oil, it’s only natural for China to push for the usage of yuan for payment settlement. This will also improve the yuan liquidity in the global market,” says Reuters.

“‘A pilot program for yuan payment could be launched as early as the second half of this year… Under the plan being discussed, Beijing could possibly start with purchases from Russia and Angola,’ said one of the people briefed on the matter by Chinese authorities…

“Both Russia and Angola, like China, are keen to break the dollar’s global dominance. They are also two of the top suppliers of crude oil to China, along with Saudi Arabia.”

“For now, the market for oil priced in yuan is small but growing,” says Jim Rickards.

“Russia is the only major oil exporter that has agreed to accept the yuan for oil,” he says.

It won’t be the last.

“This is the beginning of the end of the petrodollar deal” — the arrangement under which Arab oil producers price their oil in dollars in exchange for U.S. military protection.

“The U.S. is asleep at the switch,” Jim contends. “The irony is that the U.S. does not seem to care because we are now an oil exporter ourselves.”

As more oil exporters line up to accept the yuan, we’ll keep you posted on the decline of the dollar’s dominance.

In honor of Tax Freedom Day today, a reader reminds us of the time Walt Disney made Donald Duck the champion of income taxes…

“During World War II,” says an article at Time, “the federal government needed an easily recognizable face to explain a process that was unrecognizable to many Americans at the time.”

When the income tax was launched in 1913, only the wealthiest Americans paid it. But after the attack on Pearl Harbor, Congress passed the Revenue Act of 1942 to fund the war effort.

“In the clip, a voice coming from Donald Duck’s radio calls for ‘taxes to beat the Axis!’ and reminds the cartoon icon that paying taxes should be seen as a privilege.” 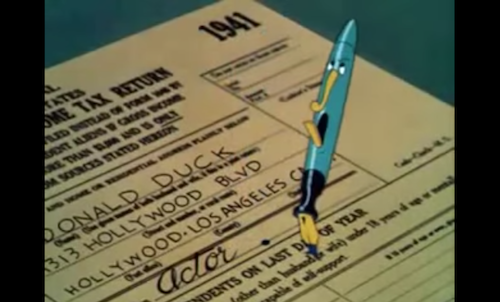 Donald (not The Donald) sits down at his desk with an animated fountain pen and blotter and completes his tax return for 1941. He lists his profession as “actor” and claims adopted nephews Huey, Dewey and Louie as dependents.

Time reviewed this short film, called The New Spirit, in 1942, saying, “It gets its propaganda across with the anesthetic blessing of laughter and great good humor.”

“I just read The 5 where one reader commented that he paid over 10% of his income for health insurance,” a reader writes.

“As long as we are complaining, I pay over 16% of my gross income (unfortunately for me I’m a W-2 tax slave) for health insurance. And it is absolutely basic, high-deductible ($5,500) insurance for just me, not for a family. And I am told that it is the best deal I can get in California at my age (62).

“The health insurance thing is a separate issue from the ridiculous taxes I pay. I don’t even want to get started on that. It’s all just theft in the end. Does anybody else out there have this kind of thing going on? I wonder if this is where revolutions come from.”

The 5: Funny that Tax Freedom Day falls on the same day this year as Patriots’ Day, the anniversary of the “shot heard ’round the world”…

P.S. We’ve talked a lot about retirement today… and you might find that depressing. But it doesn’t have to be…

Alan Knuckman’s Weekly Wealth Alert is on a roll with 49% and 50% gains yesterday… and another 75% on the way today or tomorrow… affording you a shot at literally making your retirement.

Click here and learn how you can seize the moment.