So far it’s been a gangbusters earnings season. Too bad it means nothing as far as the stock market’s performance the rest of this year.

The researchers at FactSet tell us that among the S&P 500 companies reporting so far, profits have grown an average 18.3% compared with a year ago. That’s the best performance since the first quarter of 2011.

Which sounds impressive, for sure.

Unfortunately, this number is no guarantee of a good year for the stock market overall. In 2011, the market ended the year where it began — with loads of volatility in between… 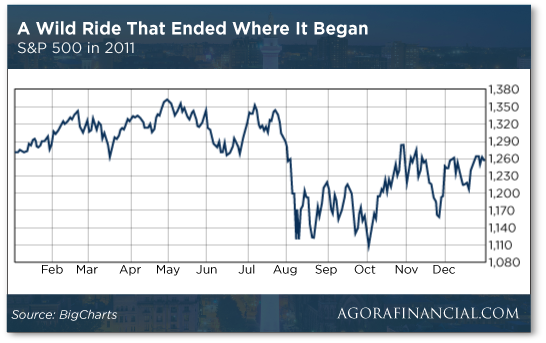 The big drop that summer, you ask? It coincided with Standard & Poor’s stripping the U.S. government of its pristine AAA credit rating.

No, we’re not forecasting 2018 will play out the same way. We’re just saying strong earnings growth is no guarantee the broad stock market will do well.

[Ed. note: On the other hand, there are always individual names in the market that do well even at a rocky time like now. Last week, readers of Alan Knuckman’s Weekly Wealth Alert had a chance to close out options trades good for 49% gains on Intel and 50% on U.S. Steel.

Alan’s latest trade is just out this morning. If you want in, follow this link and learn about the most powerful upgrade you can make to your Agora Financial account this year.]

When you buy and sell a stock or other security, you probably take it for granted that someone’s there to take the other side of the trade. Maybe you shouldn’t.

The front page of this morning’s Wall Street Journal says “liquidity” — the ease of getting into or out of an investment — is harder to come by these days. That applies even to some of the most widely traded securities out there…

The Journal article skirted the question that anyone reading critically is bound to ask: Doesn’t this lack of liquidity heighten the risk for some sort of market “dislocation”?

“Liquidity is the ultimate paradox in finance,” says our macroeconomic maven Jim Rickards — putting flesh on the Journal story’s bones for us.

That’s a crowd-behavior thing, Jim explains: “When markets are calm, no one wants liquidity because investors are happy to hold stocks, bonds, currencies, commodities and other assets in their portfolios. As a result, there’s plenty of liquidity on offer from bank lenders and very few takers.

“In those circumstances, there’s not enough liquidity to go around. Banks, and ultimately regulators, decide who lives and who dies (financially speaking) by offering liquidity or cutting it off.”

As it happens, Jim is seeing signs that such a moment is on the horizon. A few financial pros are talking about it, but it’s not yet on the Journal’s front page. It’s a little wonky, but hang with us: It’s something called the “Libor-OIS spread.”

Libor is the London Interbank Offered Rate — a crucial interest rate benchmark for everything from business loans to adjustable-rate mortgages.

“In principle, the OIS rate and Libor should be almost the same. Both are unsecured short-term rates for lending between banks. The difference is that the OIS rate is tied to a rate central banks control such as fed funds and Libor is tied to a rate the banks set between themselves. A typical spread between Libor and OIS is 10 basis points (bp), or 0.10%.

“When the Libor-OIS spread widens beyond about 10 bp, it is a sign of stress or lack of liquidity in the banking system. The OIS rate stays anchored because it is linked to a central bank target rate. But Libor increases because the banks either don’t have funds to lend or begin to question the creditworthiness of the counterpart banks.”

Where is this spread now? 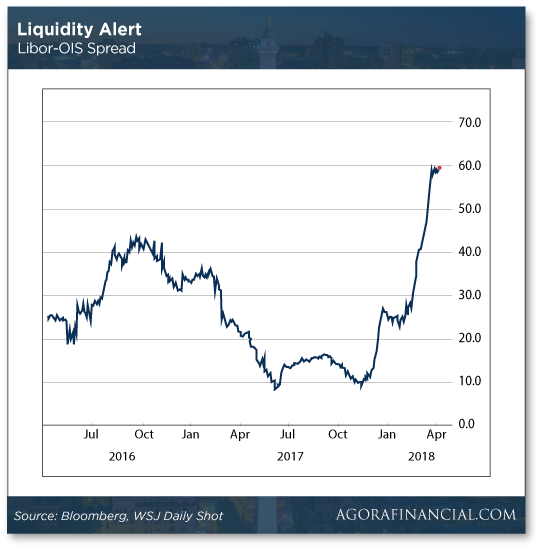 In the meantime, however, calm prevails in the stock market — with the major U.S. indexes hanging tough after Friday’s smackdown.

The Dow is up only a tad, but the Nasdaq is up more than half a percent.

But Treasuries are selling off, pushing yields up. The 10-year yield is pushing 2.98% — a level last seen more than four years ago. Gold is selling off too, the bid down to $1,322. That’s mostly a function of dollar strength; the dollar index is now the highest in more than three months at 90.9.

Crude is down a bit but still holding the line on $68 a barrel.

The big economic number of the day is existing home sales — up 1.1% from February to March, says the National Association of Realtors. Year over year, however, the pace is down slightly thanks to tight supply and rising mortgage rates.

Amid the flurry of headlines about Iran these days, you might have missed this: Last week, the Iranian government stopped quoting the dollar as its reference when carrying out transactions with other countries. It’s now quoting the euro instead.

On the one hand, the move is mostly symbolic: Despite the 2015 Iran nuclear deal, most U.S. economic sanctions against Iran remain in place. There’s almost no trade between the two countries.

On the other hand, some observers would point to the “Saddam precedent.” In 2000, Saddam Hussein said he wanted to price Iraq’s oil in euros rather than dollars. By 2003, he’d been regime-changed.

By the way, Iran’s top two trading partners are the United Arab Emirates and China. The two of them together account for nearly half of Iran’s imports and exports. The Chinese in particular will have no problem ditching the dollar when calculating their trade with Iran.

The jokes almost write themselves… 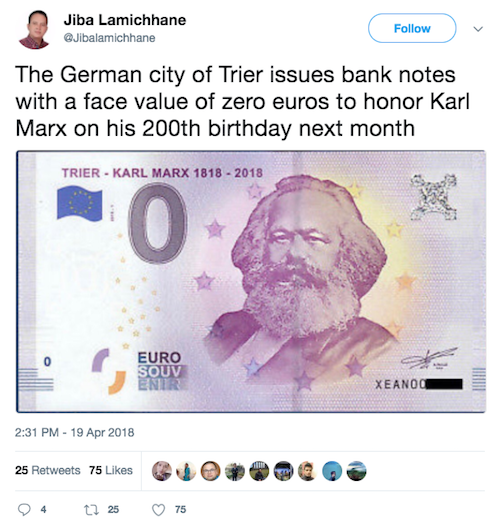 Oh, they’re real bank notes from the European Central Bank. But yes, they’re souvenirs. They’re selling for 3 euros each — nearly $4 — in Marx’s hometown of Trier. “The souvenir plays on Marx’s criticism of capitalism and of course the 0 euro note fits perfectly with Marx as a motif,” says Norbert Kaethler, managing director of the city tourism office.

The first batch of 5,000 quickly sold out, so another 20,000 were ordered. Demand is sure to rise between now and the actual birthday of May 5.

“The city is proud of its most famous resident,” says a dry-as-dust Reuters dispatch, “though some Germans blame his ideas for the rise of communist dictators in Russia, China and Cuba and the Cold War division of their country.”

“Dave, I apologize if other readers are questioning The 5’s credibility because of my input,” writes one of our regulars, tongue firmly in cheek. “I wasn’t aware people who know nothing about me are more familiar with my finances and my taxes than I am.

“Not that others would be interested in specifics — but I’m single and 56 years old with no dependents, no mortgage deduction, no IRA or 401(k) contributions and no employer-sponsored health care. I’m a self-employed 1099 contractor. I buy stupidly overpriced health care insurance through New York’s Obamacare exchange. I don’t qualify for subsidies. My only ‘retirement contributions’ these days are physical silver and gold.

“So I appreciate the ignorant fact-checker’s tip about the difference between AGI and taxable income, and what he/she believes my taxes should be. But perhaps that person should mind their own business!”

Another reader writes in to rise to the reader’s defense: “Just for kicks and giggles, let’s question if this fellow’s critic is paid on a 1099 or simply self-employed.

“Then on that 46K, you are paying 15.3% self-employment taxes, plus the income tax. So with just table-napkin math, yes, for those of us ‘lucky’ enough to be self-employed, about a quarter of our AGI goes to the feds right out of the gate.

“Most payroll employees forget that the employer contributes half of their employment taxes, which of course comes out of the earnings they would make otherwise. (We will skip commentary on the tastelessness of ‘employment’ taxes… where you are taxed for having a job.) But most people don’t consider those things because, hey, they got money back! Never mind that it is their money… that they loaned the government all year long… at zero interest.

“And because they never saw the employment taxes to begin with, conveniently ‘withheld’ from their paycheck every week, they look only at AGI versus income taxes paid and think, Gee, what a deal!’

“But we still think paying 3½ times the purchase price of a home over 30 years is a good deal in this country as well.”

The 5: Thank you both for the vivid reminder of how challenging it is to be self-employed. More than two years ago, we gently suggested that were it not for (1) the self-employment tax and (2) health insurance costs, there’d be a heck of a lot more people in this country willing to go into business for themselves and the nation as a whole would be a heck of a lot more prosperous.

Yes, we know the new tax law might carve out certain advantages if someone is self-employed and can organize as an LLC, an S corporation or similar arrangement. But this “pass-through” section of the law was written so hastily and sloppily — the original draft was crafted specifically so the GOP could put out a press release dissing NBA star Steph Curry — that it’s an open question whether you’ll qualify in your own circumstance. Consult a qualified tax professional…

[We’re still withholding the name of the firm because Ray urged his readers to sell only one-third of the position because it might be buyout bait.]

Breakthrough Technology Alert covers tiny companies in both the high-tech and biotech spheres. Ray says the next big opportunity is due to hit only three weeks from now. Click here to learn how it could turn Wall Street upside-down forever.