Oh, the day started out so promising yesterday…

Then it was time for CAT’s conference call with analysts. Company honchos befouled the punch bowl by saying those stellar first-quarter numbers might well be a “high-water mark” for the year.

No one wanted to hear this is as good as it gets for the business of backhoes and bulldozers. CAT ended the day down 7.5% from the day before, dragging the Dow down more than 400 points. (Another industrial giant and Dow 30 stock, 3M, also served up a disappointing forecast for the rest of the year.)

But there was a funny thing about yesterday’s market action, and it’s continuing into today: Small stocks are holding up better than the behemoths.

Yesterday the Dow tumbled 2%. But the small-cap Russell 2000 slipped only 1%.

When small fry outperform — even if they’re losing less than their large-cap brethren — that’s usually a healthy sign for the market overall.

Ah, but aren’t smaller stocks supposed to be more risky? Not if you do it right, says Tim Sykes.

We introduced you to Tim back in January. When still a high-school student in 1999, he took $12,415 of money given to him for his bar mitzvah and began day trading. By the time he graduated from Tulane, he’d amassed a fortune of $2 million. And he did it despite the dot-com meltdown of 2000–2002 in which most day traders lost their shirts.

“The secret to success,” Tim says, “is to simply master a few key market patterns and rinse and repeat thousands of times with profits of a few thousand dollars — all while cutting losses when wrong.”

So why do 90% of traders get eaten alive — even when the market is rallying? “I know too many traders who have lost 30%, 50% or even 100% of their money on just one or two trades due to flaws with their approach,” Tim explains. “What’s even worse is I know many people don’t start trading in the first place for fear of losing big and blowing up. They never even give themselves and their future earnings a chance.”

Tim and his top students are the exceptions. And he wants you to be exceptional, too.

Really, it comes down to a few simple things not to do…

For starters — and the all-caps here are Tim’s — “ALWAYS CUT LOSSES QUICKLY.

“My dad likes to say, ‘Big losses always happen this way: It goes from green to red to stubborn,’ meaning a student will have a small profit on a stock, get greedy and not take the profit. Then they will start losing money on the trade or go into the red on their position. And then they get stubborn, refusing to cut losses quickly, and that’s how small gains and losses can turn into potentially big losses.”

Remedy (and again, Tim is resorting to all-caps because he really means this): LEARN TO TRADE LIKE A COMPLETE COWARD LIKE I HAVE.

“Your trading does not have to be stressful if you’re willing to simply exit trades quickly when they’re not heading in your direction like you wanted.”

“No matter how sure you are on any play, long or short, something can always happen that will change the trade.

“Sometimes it can happen slowly or sometimes even in a heartbeat. Since you cannot predict these events, all you can do is learn to prepare for them ahead of time by taking reasonably smaller position sizes.

“Yes, it’ll take you longer to make millions, but remember 90% of traders lose, so the odds are against you.”

And whatever you do, “Don’t use leverage and don’t borrow.

“I know many people think leverage is the key to turning a few thousand dollars into millions.”

“Penny stocks are plenty volatile for you to grow an account exponentially within a few years without the need to borrow money from your broker, or anyone else for that matter.”

He has a few other tips. For instance, accept that stock prices aren’t rational. (That applies to companies of all sizes, as you might recall with our discussion of Google yesterday.) Understand the stock market is complex, with many indicators interacting at once. And don’t try to guess the news ahead of time.

It’s the last of those items that’s key to a unique new service we’re unveiling this week. Tim has developed something he’s calling the R.A.L.L.Y. system. Using it, you can capture gains of 352% in as little as 24 hours. And that’s with a plain-vanilla brokerage account. No options or anything fancy.

Tim reveals all this Friday at 1:00 p.m. EDT — including three new buy recommendations. For a sneak preview, follow this link.

As the day wears on, the major U.S. stock indexes have trimmed their early losses. The Dow is down a quarter percent. The Nasdaq is actually in the green a bit.

But the big story remains the sell-off in Treasuries pushing yields higher. The yield on the 10-year note is again hovering above 3% — territory last seen in early 2014, and only briefly.

Really, though, it’s not the round number on the 10-year that has Wall Street freaked as much as the narrowing “spread” between the 10-year note and the 2-year note. 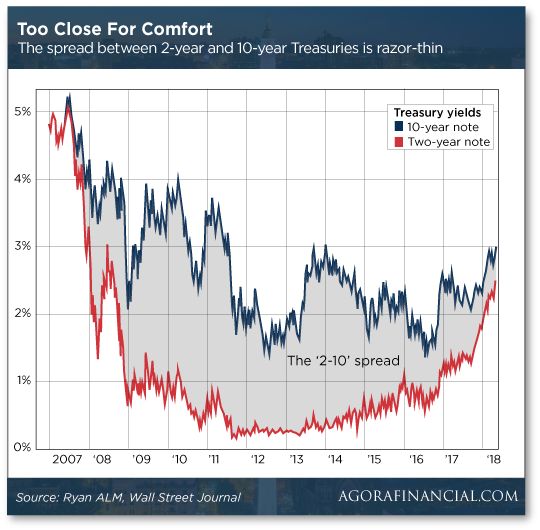 The Federal Reserve exerts much control over short-term interest rates like the 2-year, and the Fed has been in “tightening” mode for the last year and a half. But longer-dated Treasuries are more responsive to market forces… and the fact the 10-year yield is so low relative to the 2-year has the bond market fretting over the possibility of a recession.

Indeed, there are times when the 2-year yield exceeds that of the 10-year — if you’ve ever heard the term “inverted yield curve,” that’s what this refers to — and over the decades, that’s been a sure sign of recession.

Elsewhere, gold languishes in the low $1,320s. Crude isn’t reacting much to the weekly inventory numbers from the Energy Department, a barrel of West Texas Intermediate flat at $67.70.

The restaurant industry isn’t sharing in the good vibes of the Trump White House’s deregulation efforts.

We had generally kind words last year for Trump’s FDA commissioner Scott Gottlieb… and he’s done a commendable job in letting drugs and medical devices come to market sooner… but now he’s signed off on Obama-era rules requiring any restaurant with 20 or more locations to post menu boards with calorie information of every available item. They come into effect next month.

They’re especially onerous for pizza joints, according to Jim Gerety — chairman of the Domino’s Franchisee Association and owner of 18 locations in Texas. “Domino’s offers consumers 34 million different combinations of pizza,” he points out in the Washington Examiner. “Can you imagine yourself in a small store in Midland or Odessa, Texas, plastered with menu boards, trying to calculate all of these possible combinations?”

But a bigger issue might be liability: “Gottlieb’s rule exposes my employees and me to civil and criminal penalties of up to one year in prison and/or a $100,000 fine for inadvertent violations. That means if one of us accidentally tops a pizza with too much pepperoni or cheese, or is a little heavy-handed with the tomato sauce on a given day, we could be headed to prison.”

Hyperbole? Maybe, but Gerety says, “FDA has offered no information or clarity except: ‘Trust us.’”

“One other note on the cost of employer-sponsored health insurance,” a reader writes on an ongoing mailbag thread:

“From an employer’s point of view, the older you get the more expensive you become, even if your salary remains constant. Because your health insurance costs more as you age. This really starts to take off when you hit about 50 and is screaming out loud when you cross 60. It’s very much in an employer’s interest to cap the average age of its workforce. Remember that if you get forced out for no obvious good reason when you hit late middle age.”

This is yet another unintended consequence of a system tying health insurance so tightly to employment. And the solution is not, as some conservative think-tank types advocate, killing the tax break employers get for providing health insurance. The solution is for government to stop protecting the cartel-like practices of the health care industry, which would collapse costs.

“Just read The 5 on Jim Norman and The Oil Card,” a reader writes on one of our topics last week.

“Just wanted to add that Russia has known for a long time about the manipulative practices of commodities way back when to bring down the Evil Empire.

“Thus, in my opinion, if the powers-that-be think they can repeat this, they have been foolin’ themselves for a very long time!”

The 5: If the reader’s remarks are Greek to you, GATA is the Gold Anti-Trust Action Committee — a group of individuals trying to document how governments, central bankers and commercial bankers conspire to suppress the gold price.

We admire their tenacity over the years. But honestly, it’s not as if any amount of smoking-gun evidence they amass will put anyone in prison or otherwise vindicate their efforts. (It’s a long story, one we explored most recently last fall. Gold will soar one day, but not because someone calls BS on the power elite’s manipulation schemes.)

We’d forgotten all about the Russian delegation that showed up for GATA’s August 2005 conference in Dawson City, heart of the Canadian gold rush in the 1890s.

We’re not sure if cause-and-effect is at work, but the Russian Central Bank did begin a massive gold accumulation program in early 2007 — nearly quadrupling its stash since then. “The Central Bank of Russia routinely buys 20–30 tons of gold every month,” Jim Rickards said here in January.

Russia and China both are in accumulation mode. “Both countries want gold prices to be well-behaved and for gold markets to be orderly until they are much further along in their gold-buying programs.

“Once China and Russia have all the gold they want, all bets are off and they may very well favor a skyrocketing price to undermine confidence in the U.S. dollar.”

But we’re not there yet…

P.S. Among the day’s earnings winners: Comcast, Twitter and Boeing.

But if it’s real excitement you want surrounding earnings season, you won’t want to miss what Tim Sykes has cooking this week. Because we’re entering what could be the most profitable window this year in the penny-stock space.

Tim will tell you more about it at 1:00 p.m. EDT this Friday — including three brand new recommendations. Click here for further details and access.