Is “Good” Penny Stock an Oxymoron?

If you believe the MSM, there’s no such thing as a good penny stock.

Try this: Plug “penny stock” into your computer’s browser and you’ll see headlines like this…

There’s no denying penny-stock investing can be fraught with pitfalls. That’s a given. But if you minimize the missteps, is the investment opportunity too good to pass up?

Penny stocks aren’t what you think…

It’s not all bad news, by the way. That same browser search will yield positive results too — like this from Library for Smart Investors: “Penny Stocks – Maybe Worth More Than a Penny for Your Thoughts.”

The article breaks down the anatomy of a penny stock:

PRICE: This is its defining characteristic, after all. Grandad might have called anything under $1-per-share a penny stock but the SEC now designates anything $5 or less a penny stock.

RISK: There’s no way around it: “While risk is inherent in almost any type of equity, penny stocks are much more susceptible to it.” Companies that issue penny stocks — commonly — generate little revenue because they’re in the early stages of growth.

VOLATILITY: “Low-cost stocks, like penny stocks, trade on rumor and news. As a result, you can experience wild price movements on any given day.”

Without suspending good judgment here, put on your rose-colored glasses and try to see volatility as an opportunity. More on that later…

VOLUME: Penny stocks are likely small or micro-cap stocks “and don’t attract the keen interest of many investors – such as institutional money managers.” The upshot is low trade volume.

A parting thought on penny stocks: “If you plan on putting money into…these stocks, remember – these are NOT long-term investments.

“Instead, you should look at these as trading vehicles, and you should be nimble enough to jump out of the trade when the signs start to turn against you.”

“Too many beginners stop cold and say, ‘I could never make trades like this,’” says Tim Sykes, our penny-stock millionaire maker.

“I like to start the story with just a PENNY,” says Tim, “because I’m a penny stock trader at heart.

“And I want to show people how big that penny can grow.”

For Tim, the best way to express this phenomenal growth is to say he turned every penny of his original grubstake into $3.86.

“And,” he continues, “if you start where I actually did, which was that gift from my grandparents of 12k that I began investing…it becomes multi-millions.”

Tim’s point: “Anybody can do this, no matter how much you’re starting with.” But timing’s everything…

There’s no better time for penny-stock trading than this week when companies release earnings reports…that are largely ignored by Wall Street types.

Tim likes to think of penny-stock opportunities — especially during earnings season — as “hiding in plain sight.” And he equates the momentum these stocks get to a rally (think muscle cars with engines revving).

“This RALLY system for analyzing penny stock earnings activity wasn’t something I just dreamt up out of thin air either,” says Tim. “I’ve put hundreds of thousands of dollars into building it. Hundreds of hours too.”

And you don’t need some special brokerage account to make Tim’s RALLY trades — a run-of-the-mill account will do.

Rare Runway: Tim looks for penny stocks that stack up against his special technical indicators; he calls them “highest conviction stocks” that he’s filtered from the flops.

Accurate Archives: Not all companies report earnings — especially in the penny-stock space. These are the companies that give penny stocks a bad rap…Tim takes a pass.

Laughable Lookovers: Tim’s on the lookout for penny stocks with gargantuan upside…the ones Wall-Street insiders overlook. As for laughable? Tim — and his students — get the last laugh.

Lightning Liquidity: Unlike blue-chip stocks that see immediate movement based on earnings news, penny stocks have a longer window of about 48-hours before anyone catches wind of opportunity.

“And then when those big hedge fund managers, or your cousin who watches CNBC, or whoever, discovers those penny stocks have been spiking up,” Tim says, “we’ve already cashed out.”

You Time: “Treat yourself…Whatever you enjoy most.” Perhaps it’s driving a luxury car…or building a school for orphans. Tim’s done both. The point is — with Tim’s RALLY strategy — “You got in, you got out, you made money. You’re done.”

Tim’s take: “Penny stocks are the ONLY unfair advantage the little guys have in 2018. But it’s a HUGE advantage.

And Tim’s RALLY system makes it ridiculously easy to sort out the best penny stocks and buy them before they shoot through the roof.

Tim’s done the work for you — plus identifying 3 hot penny stock plays. He’ll reveal all this Friday at 1:00 p.m. EDT. For readers of The 5, click here for a preview.

Stocks are staging an honest-to-goodness rally for the first time in a week… and tech is leading the way.

Facebook and AMD delivered stellar earnings numbers, powering the Nasdaq up 1.5% at writing. FB is up 8.5%. (Cambridge Analytica scandal? What scandal?) The Dow and the S&P 500 are both up more than three-quarters of a percent.

In addition to earnings, we have a couple of significant economic numbers for traders to chew on:

“The tides in the oil market have…turned,” says Zach Scheidt.

“Once again, the Baker Hughes oil rig count is continuing to drift higher.

“That’s because higher oil prices are making ‘offline’ rigs once again profitable to operate, which for us creates another valuable opportunity in today’s energy market.”

“This is great news for the big, vertically integrated oil companies like Royal Dutch Shell, ExxonMobil and Chevron who not only drill the more valuable oil, but who will also get paid more to refine and transport the growing quantities of U.S. production.”

“But you might be asking,” Zach continues, “if more rigs get back online and more oil is subsequently produced, shouldn’t the price of oil start to fall again?”

Because the economy is humming along alright, we’re using all the oil we can produce. And with the approach of summer — meaning a spike in road trips and airline travel — the demand for oil will likely increase.

“If you’re looking to cash in on this opportunity,” Zach says, “I recommend buying shares today

“That’s because tomorrow, Chevron, Phillips 66 and ExxonMobil all report earnings, which could send their stock prices quickly higher.”

“People in Kentucky took this stuff very seriously,” said Treasury Secretary Steve Mnuchin according to The Washington Post. “Being a New Yorker, I don’t have any interest in watching the eclipse.”

Mr. and Mrs. Mnuchin kicked a hornets’ nest when the couple flew to Kentucky on August 21, 2017– ostensibly to check out the gold at Fort Knox.

The timing of Mnuchin’s Fort Knox visit was questionable because he travelled on the day of a solar eclipse…and the Blue Grass State just happened to be in the “path of totality.” In other words, Mnuchin and his wife had the best seats in the house to view the astronomical event…at taxpayers’ expense.

Mr. Mnuchin defended himself by saying — in a New York accent? — “Wasn’t interested.”

But now there’s photographic proof of the opposite…. 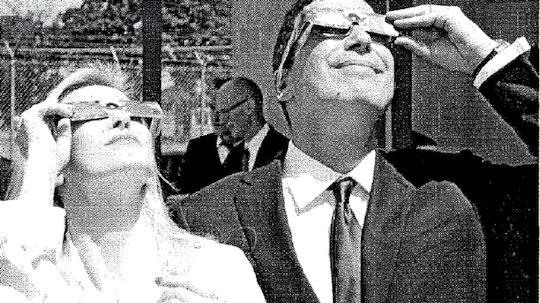 Credit: U.S. Department of the Treasury

The website ThinkProgress, using FOIA, got the grainy evidence that Mnuchin not only viewed the eclipse…but actually — gasp — enjoyed it!

“The trip raised questions about Mnuchin’s habit of using of pricey chartered aircraft to fly around the country,” ThinkProgress says. “The flight to Fort Knox cost taxpayers $26,900.25.”

You can view the secretary’s Fort Knox itinerary here…including a note that protective eclipse eyewear was provided by the U.S. Mint.

“It’s incredible how out-of-control the tax burden has become in America as well as in many other nations,” writes one of our regulars. It has become as mind-numbing as our spending problem.

“Aside from the obvious income taxes, sales taxes and most insidious ‘tax’ of all — inflation — I wonder if there are any readers of The 5 who aren’t getting whacked with most of these:

“That is by no means a complete list. Of course we can add various documentation fees, equalization fees, service charges etc. They’re all very official sounding, and all cleverly designed to extract our wealth and transfer it to the crown.

“History shows that at some point, when the citizens finally realize how badly they’re being fleeced, things get really crazy…”

The 5: On the other hand, as Dave points out now and then, the government is very skilled at testing how far it can go and still retain the consent of the governed.

P.S. We’re in the thick of earnings season now. In addition to Facebook and AMD, dozens of other companies have beaten analyst estimates in the last 24 hours — Visa, Ford, Chipotle, PepsiCo. (AT&T served up a rare “miss.”)

It provides no shortage of chatter for CNBC, but it’s never going to make you big money.

As Tim Sykes explained earlier, if you really want to make money from earnings season, you have to go into the penny stock space — where Tim’s been making millions for two decades.

After months of exhaustive (and costly) research, Tim has perfected a system to profit from huge earnings moves in the tiniest of companies. We’re talking gains of up to 352% in as little as 24 hours, just using a regular brokerage account.

Tim takes the wraps off this system tomorrow at 1:00 p.m. EDT — including three buys. If you want access, follow this link for all the details