Has Apple Run out of Ideas?

It’s been six and a half years since Steve Jobs died. Would he even recognize the company he left behind?

Apple Inc. delivered its quarterly numbers after the closing bell yesterday. There was a lot to like…

… unless you’re talking about a massive share buyback. That’s the real reason AAPL shares are up 4% as we write this morning.

AAPL plans to buy back $100 billion in shares — the biggest-ever share repurchase for a U.S. company, according to Birinyi Associates. That’s on top of $200 billion the company has bought back since 2012 — a process that started only months after Jobs’ death.

The beauty of share buybacks is that it reduces the total number of shares outstanding — making each share you own more valuable because you literally own a bigger piece of the company. At AAPL’s current market cap, about 12% of the shares will be retired. All else being equal, every dollar of Apple shares you own will be worth $1.13 once the buyback is complete.

Not all buybacks are wise. If the company’s shares are expensive, it’s downright dumb. But AAPL sports a price-earnings ratio this morning of 18.2. Among America’s five biggest publicly traded companies, AAPL is far and away the best bargain… 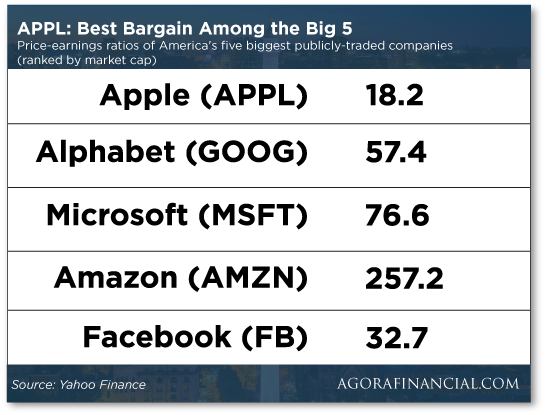 But make no mistake: Buybacks are a very un-Jobsian thing to do.

In general, returning cash to shareholders is a very un-Jobsian thing to do, whether we’re talking about buybacks or dividends. Jobs much preferred to plow Apple’s profits back into the company and develop fabulous new products. Time and again, Jobs said words to the effect of, “If we do buybacks and dividends, that means we’ve run out of ideas.”

A Wall Street Journal story from 2012 tells us Jobs’ underlings convinced him to do a buyback in late 2001 — after the Sept. 11 attacks tanked the stock market 11.5% in a week and a half. But that was a one-off: The company hired bankers to study additional buybacks, but Jobs quickly nixed the notion. “He felt the company could use the money to grow the business by more than the bump to earnings a buyback would provide,” said the Journal, citing an anonymous source.

It’s interesting to play “counterfactual” history and speculate what would have happened if Jobs had lived longer and Tim Cook remained a top lieutenant. Would shareholders have revolted if Jobs were sitting on $267 billion in cash in early 2018? Or would he have used that cash to develop new and desirable products for which Cook lacks the vision?

Whatever the answer, Apple under Cook is walking the path many successful American companies have followed before… and that’s not a bad thing at all for shareholders.

Certainly our income maven Zach Scheidt likes the dividends and buybacks. As he explained it here more than two years ago, “Apple’s best growth days are now squarely in the rearview mirror. Apple’s sheer size makes it impossible to continue to grow at the same rate it has in the past.

“There is less of a need to invest in projects that will help the company grow, because there are fewer growth opportunities now available. At the same time, more cash is coming into the company. This is because the company already has an established business with reliable sources of income and a large base of customers.

“Since mature companies don’t need to invest their cash in growth opportunities, they are free to distribute that cash to investors.”

Indeed. In addition to the $100 billion buyback announcement yesterday, AAPL raised its dividend for the sixth time in six years.

[Ed. note: Dividends are great… but there’s an even more lucrative income-generating strategy Zach is keen on. And no, we’re not talking about selling options.

The strategy is so powerful that Zach’s publisher recently performed an eye-opening experiment — showing an unemployed HR worker how to “lock in” $52,000 of legally guaranteed income checks in a matter of minutes, from four companies.

You can see which companies we’re talking about and how to do it yourself when you follow this link.]

To the markets, where everything is in suspended animation awaiting cues from the Federal Reserve.

By the time you read this, the Federal Reserve will have issued its latest proclamation on interest rates. No increase in the fed funds rate this time, but Wall Street will parse the statement for clues about the Fed’s intentions for the rest of the year. We’ll follow up with anything important tomorrow.

Even for a hardcore gold bug, this might be a bit much: Egyptian billionaire Naguib Sawiris has plowed half of his $5.7 billion net worth into gold.

From present levels just above $1,300, Sawiris is counting on a jump to $1,800. “In the end you have China and they will not stop consuming,” he tells Bloomberg. “And people also tend to go to gold during crises and we are full of crises right now. Look at the Middle East and the rest of the world and Mr. Trump doesn’t help.”

We’ve discussed Jim’s 10% recommendation often… but we haven’t discussed the logic behind it. Why not go all in like Mr. Sawiris, especially if Jim has a long-term target of $10,000 an ounce?

Think of gold as insurance. To illustrate, Jim offers the following example…

“If gold declines 20%, unlikely in my view, the impact on your overall portfolio is a 2% decline (20% x 10%). That’s not highly damaging and will be made up as equity assets outperform.

That’s important because if gold is rising at that clip, it’s entirely possible stocks will be crashing. If they fall 85% as they did at the outset of the Great Depression and you have a 60% stock allocation, that’s a 50% loss! But the gold protects you. “Total portfolio performance in this scenario is a gain of 15%,” Jim explains. “That’s the insurance aspect at work.”

And again, all it takes is a 10% gold allocation.

For the record: The Russian metals giant Rusal has won an amnesty from the U.S. Treasury, averting what could have been a global supply squeeze for aluminum.

When the Trump administration imposed new sanctions on several Russian billionaires last month, one of the targets was Oleg Deripaska — controlling owner of Rusal. Aluminum prices leaped 30% in two weeks as businesses all over the world feared they could no longer obtain supply from Rusal.

But Rusal has promised Deripaska will reduce his ownership share and give up his seat on the board. Last night the Treasury granted Rusal an extension for compliance with the sanctions.

Aluminum prices have pulled back, but they’re still more than 10% higher than before the sanctions were announced.

In early March we told you about a minor change in tax withholding for a small subset of workers — those who have a health savings account and max out their family contributions.

The IRS reduced the max for 2018 by $50 because the new tax law directs the IRS to use a measure of inflation called “chained CPI” — which lowballs the rising cost of living even more than the government’s conventional inflation number.

Fast-forward a few weeks and the IRS has reversed its decision because of “numerous unanticipated administrative and financial burdens,” according to an IRS document.

Reading between the lines, it sounds as if the IRS’ own flunkies said the change was more trouble than it was worth: “… the costs of modifying the various systems to reflect the reduced maximum, as well as the costs associated with distributing a $50 excess contribution (and earnings), would be significantly greater than any tax benefit associated with an unreduced HSA contribution (and in some instances may exceed $50).”

Fair warning: Chained CPI will affect everyone, not just this niche group. The standard deduction will grow more slowly each year. Over time, you might be pushed into a higher tax bracket even if your income stays stagnant.

Readers still want to pipe up about our Facebook Messenger experiment: “I agree with the ‘old fogey’ who wants to read The 5 via email, and I am 38, not much older than the oldest millennials.

“I don’t even read The 5 every day, but even when life gets busy, it’s always worth catching up later when I have more time. I go back and read all the versions I missed. I suppose you could say I binge-read The 5.

“But like that guy said, Facebook is meant for a short attention span, and the only way to not miss anything is to check it every 10 minutes. With my email inbox, I know that your essential insights are always there for me, even if I fall a few days behind.”

The 5: Good point. That’s why we’re making a point of catering to people of many different attention spans. Heh…

“As a recently retired cybersecurity professional, I have always been deeply suspicious of the viability of Facebook’s security,” another reader writes. “This is why I have canceled subscriptions to services that migrated to require Facebook.

“I advised my family members that if they are going to use Facebook, then they should be careful to only share information that they are willing to become universally known regardless of how tightly they had set Facebook’s security settings. For example, they should be careful to erase intrusive metadata that are automatically embedded into modern digital photographs before posting, because that metadata can include GPS locations and other possibly sensitive private information.

“I suggested that if they have to report personally identifying information such as birthdays, etc. that they should consider altering some of that information to confuse the ‘bad guys’ who might access their material in violation of Facebook’s security and privacy claims. My sister followed my advice. She was very glad that she had when her Facebook information was harvested by ‘bad guys’ and was subsequently used to try to scam her.

“Working-age readers should be advised that some potential employers reportedly search the Facebook information of job applicants as part of their screening process. Be careful about what you post.”

The 5: Good advice no matter how much of a presence you have on social media. And if we didn’t make the point strongly enough yesterday, rest assured we will never force you onto Facebook as your only option to access The 5.

P.S. Imagine performing a few strokes on a computer keyboard… and collecting regular checks for the next three, four or five years totaling thousands of dollars. Payments that are legally guaranteed.

Actually, you don’t have to imagine at all. You can click here and see someone with zero financial experience do it… and then learn how to collect these checks yourself.