One reader takes exception to shocking and bombshell headlines and makes this cheeky suggestion: “How about ‘Shocking Blonde Bombshell’?”

Now that we’ve got your attention — heh — we’d like to talk about something decidedly unsexy.

Something that makes people yawn or run the other way.

“If I told you their real name right now,” says our income expert Zach Scheidt, “you might think they’re too boring… or too complicated… or maybe even too risky to bother with.”

But those misconceptions might keep you from some of “the safest yet lucrative investments you can buy,” Zach says.

“Let me take the mystery out of alpha contracts and show you why they’re a great way to boost your annual income with very little risk,” Zach says.

“In case you haven’t figured it out yet,” says Zach, “I’m talking about corporate bonds.”

“Corporate bonds have a reputation for being complicated.

“And, to be fair, they do involve a lot of lingo and jargon that sounds intimidating at first,” Zach concedes. “But if you know how a loan works, you can understand bonds quite easily.”

“Corporate bonds are how big companies borrow money from the public,” he explains. “They work with a bank or a broker to create the bonds.”

“Like all corporate bonds, it starts with a par value of $1,000. It then places the bonds for sale.”

“Until then, Microsoft is obligated to make interest payments on that loan.

“A 4.5% yield means it will have to pay the bondholder $42.50 a year. It will pay that in two installments a year — meaning the bondholder will receive $21.25 every six months.”

In this scenario, Microsoft — like any corporate bond issuer — is legally required to pay back the loan with interest.

“This example was just to show you how corporate bonds work,” Zach says.

“For the real excitement, we need to look at the kinds of bonds I call ‘alpha contracts.’”

Zach’s on the lookout for high-yield bonds that trade close to par. But he also looks for lucky breaks when they trade at a discount or — better yet — a steep discount.

Even so, he doesn’t necessarily pass on corporate bonds trading at a premium.

Zach asks the following questions of every corporate bond he considers:

When Zach can say yes to these questions, he’s left with an alpha contract — and the best chance at cold, hard CASH.

If you buy alpha contracts today — and Zach has seven recommendations to buy now — you’ll earn regular payouts like clockwork…backed by law. Buy enough of them, and you could be making thousands of dollars every single month!

Time is of the essence, though. So let Zach take all the mystery out of alpha contracts and show you why they’re a great way to boost your annual income with very little risk. Click to learn more here.

“Dow Drops More Than 200 Points As Stocks Struggle Despite Strong Earnings,” says a CNBC alert that neatly sums up these first three weeks of earnings season. Actually, at last check, it was 350 points.

“While earnings are coming in strong,” says chart-watcher Greg Guenthner, “investors aren’t scrambling to pick up shares. Consider this the burden of very high expectations. Even strong earnings beats aren’t enough to convince speculators to dive headfirst into the market.

“Here’s a great hand-drawn visual to help categorize different types of earnings situations, coupled with investor reactions to them: 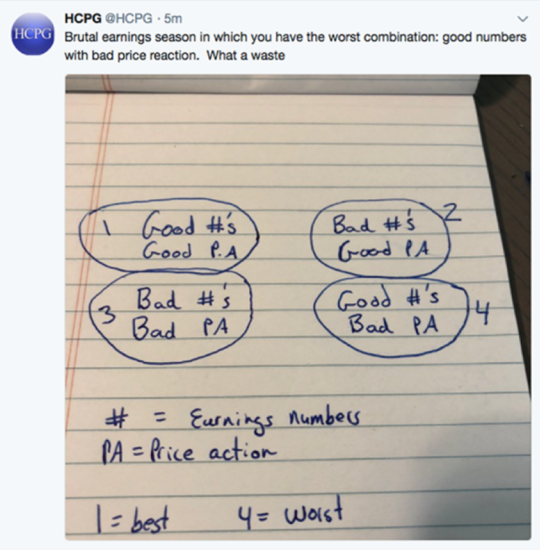 The good news: Volatility is declining. “In fact, the VIX continues to drop toward three-month lows,” says Greg. “That’s a good sign for stocks right now.”

But not for certain tech darlings. The music streamer Spotify laid an earnings egg in its first report as a public company. And Tesla CEO Elon Musk turned his quarterly conference call into performance art. He refused to answer “boring, bonehead questions” from analysts and instead answered hip and happenin’ questions submitted by his fanboys via YouTube. The Street was not amused — TSLA is down nearly 7% on the day.

The Federal Reserve delivered no surprises in its every-six-weeks statement yesterday. It’s all systems go for another bump to the fed funds rate in mid-June.

“The biotech bull took a mean hit over the past few months,” says our biotechnology authority Ray Blanco. “Many of last year’s biggest gainers were down considerably through April of this year.”

You know what that means: It might be the right time to buy!

For a start, the sell-off of biotech stocks has nothing to do with what’s been going down in FANG-land.

“Amazon fell well off its all-time highs set in March before recovering most losses post earnings,” Ray says. The cause? Trump’s tweetable opposition to Amazon chief Jeff Bezos, the company’s business model and the U.S. Postal Service’s loss of revenue.

Not to mention the drama surrounding Facebook. As Ray puts it: “We get daily reveals about how Mark Zuckerberg’s social media giant is selling our private data to the highest bidder.”

“Important stuff,” he says, “But what’s that got to do with biotech?”

“But biotech has still sold off, opening up a shot at buying exciting emerging names for cheap.

“Right now the Nasdaq Biotechnology Index is sitting near a level it’s bounced off multiple times over the past six months.” All indications point to buy: 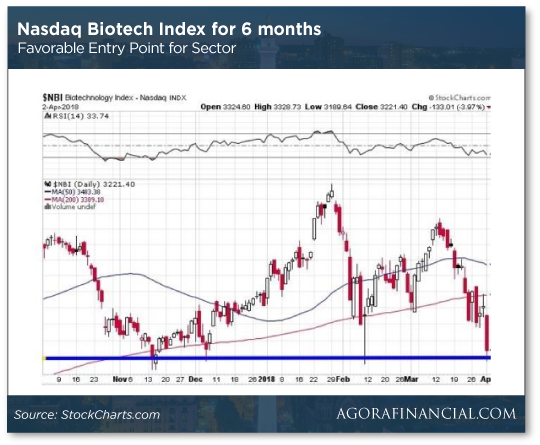 And Ray’s keeping tabs on an upcoming event that might send the biotech sector soaring.

The 54th annual meeting of the American Society of Clinical Oncology (ASCO) will draw cancer researchers from around the world to Chicago in June.

“Historically it means big things for research, but it also bolsters the stocks of many biotechs presenting data,” says Ray.

“The conference will offer up a ton of new ideas to evaluate.

“As these opportunities manifest,” he continues, “I’ll be right back here with the best ways to take advantage.”

For the record: Mortgage rates are now the highest in nearly five years.

Each Thursday, Freddie Mac reveals the average rate for a 30-year fixed. This week’s reading is 4.58%. The last time it was that high was August 2013.

American employers are dropping marijuana testing because it’s weeding out too many potential workers, especially “at a time when filling jobs is more challenging than it’s been in nearly two decades,” reports the Associated Press.

“Dropping marijuana testing is more common among employers in the nine states, along with the District of Columbia, that have legalized pot for recreational use.

“An additional 20 states allow marijuana for medical use only.

“But historically low unemployment is driving change even where pot remains illegal,” the article continues.

JIm Ready, an employment lawyer in New Hampshire says, “Employers are saying, ‘We have a thin labor pool. So are we going to test and exclude a whole group of people? Or can we assume some risks, as long as they’re not impaired at work?'”

“Companies in labor-intensive industries — hoteliers and home health care providers and employers with many warehouse and assembly jobs — are most likely to drop marijuana testing.”

Phew…you can still fly the not too friendly skies!

As some high-tech companies migrate from California to Nevada to avoid, well, California’s high cost of everything, companies are making pot-use a non-issue for employment.

And as Thoran Towler — CEO of the Nevada Association of Employers — puts it, employers are saying, “I have to get people on the casino floor or make the beds, and I can’t worry about what they’re doing in their spare time.”

Was this apple made of gold? (Golden Delicious doesn’t count…)

Last week, the Feds issued a $500 fine to a Colorado resident for “smuggling” an apple through airport customs — an apple she’d gotten on her Delta Airlines flight.

The passenger, Crystal Tadlock, wasn’t hungry when a flight attendant passed her the free apple so she stowed it in her carry-on.

“When her bag was randomly searched at customs,” says an article at Reason, “the officer discovered the apple, which was sealed in a Delta-branded bag.”

“Tadlock explained that she was given the apple on her flight and asked if she could eat it or throw it out.”

“He had asked me if my trip to France was expensive and I said, ‘Yeah,'” Tadlock told Denver’s Fox station.

“I didn’t really get why he was asking that question, and then he said, ‘It’s about to get a lot more expensive after I charge you $500.'”

She plans to fight the fine in court.

“I’m glad to see there is someone else who is not chained to Facebook,” a reader writes.

[People still want to speak up about our Facebook Messenger experiment.]

The 5: If there’s one thing we’ve learned since Dave first wrote about our experiment last Friday, it’s that a lot of readers steer clear of Facebook… and they’re really vocal about it!

P.S. Now you know what an alpha contract is.

And you know alpha contracts quickly build your income because they’re legally required to make regular payouts to investors.

So…Why wait to buy? Zach Scheidt explains his step-by-step process…and takes all the guesswork out of alpha contracts.

Keep in mind…you only have a few days to see this…You MUST act before Midnight tomorrow night. Click here to see it while you can.