The Wacky Water Cannon and an Epic Growth Story

While a volcano in Hawaii is making U.S. headlines, an even more serious natural phenomenon is devastating northern India — and it spotlights a screaming need that will attract investment dollars for decades to come. 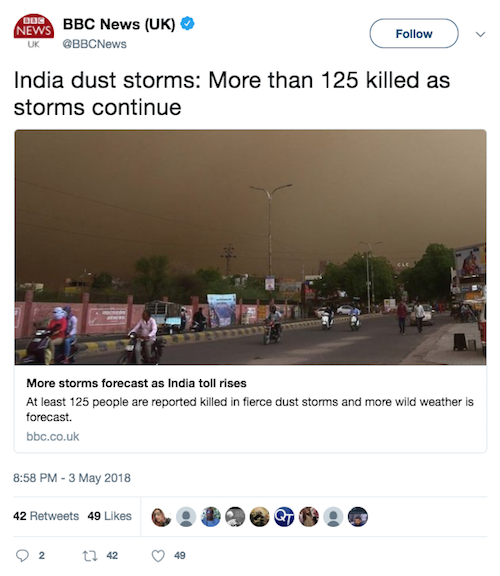 By one account, many of the dead were asleep when lightning or wind collapsed their homes. A similar wave of storms might slam the area again this weekend.

The dust storms are made worse by India’s atrocious air quality.

On Wednesday the World Health Organization issued a report listing the world’s most polluted cities. Nine of the top 10 are Indian.

“The Indian capital New Delhi and large parts of north India gasp for breath for most of the year,” reports the Associated Press, “due to vehicle fumes and swirling construction dust as well as coal and garbage fires lit by the poor to keep warm.

“Some local studies indicate up to a third of Delhi’s children have impaired lung function and respiratory diseases like asthma.” 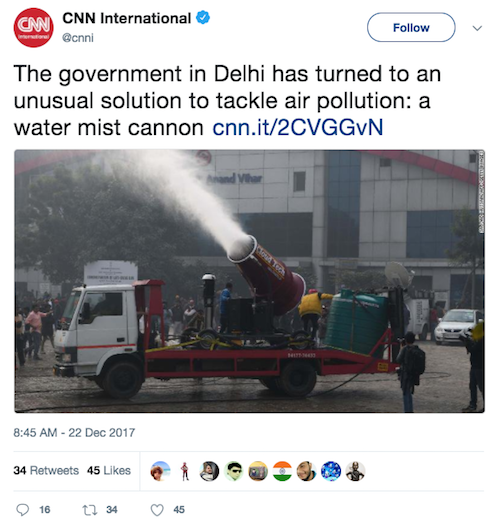 “The Indian government is employing $32,000 water cannons that fire extremely fine droplets of water at an incredibly high speed into the sky,” says our Zach Scheidt. “They knock smog-causing particles out of the air, essentially flushing out deadly airborne pollutants.

“Luckily, a better option to fix India’s air quality issues — as well as the rest of Asia’s — does exist,” Zach tells us.

As with most developing countries, the cheapest and most convenient way for India to generate electricity is coal. “But with air quality already a terrible problem, coal simply can’t be the solution given the sheer quantity of energy that these countries are going to require.”

So they’re turning to natural gas. ”When used for power generation, natural gas is by far the cleanest hydrocarbon. Burning natural gas emits 50% less carbon dioxide than coal. Further, natural gas also generates virtually no sulfur dioxide, nitrogen oxides, mercury or particulates — all of which are undesirable side effects from burning coal.”

The U.S. Energy Department projects global demand for natgas will swell 43% between 2015 and 2040.

“China alone will account for more than a quarter of that expected demand growth,” Zach explains. “That country’s natural gas demand growth is being directly driven by strict anti-pollution government policies. China’s plan is to reduce carbon emissions and air pollution by promoting the use of cleaner-burning natural gas as a replacement for coal and oil whenever possible.”

Zach thinks if anything, the numbers are low. “All of these countries with massive amounts of energy demand growth in front of them are simultaneously realizing the same thing, which is that natural gas is their clear best answer for their future energy needs. That means all of these heavily populated countries are all moving in the same direction — toward natural gas.”

[Ed. note: Natural gas is a sure winner in the decade ahead, and earlier this year Zach identified the best way to profit. Some of his subscribers have begun collecting a $411 payout for every $1,000 invested. And this payout is legally guaranteed.

It’s highly unusual… obviously lucrative… and easier than you might think. Zach’s publisher recently conducted an eye-opening tutorial showing you how it works. We encourage you to click here and check it out right away, because he’s taking it offline tonight at midnight.]

To the markets… which have no idea what to make of the April job numbers.

The Dow slid 130 points at the open, but as we write it’s up 210. It’s a less extreme version of yesterday’s action, when the Dow was down nearly 400 at its worst but recovered all of it by the close.

Apple hit an all-time high after Warren Buffett disclosed Berkshire Hathaway has added a huge slug of AAPL shares to its holdings. Perhaps more significantly, Berkshire has unloaded all of its stake in IBM. For a long time, “Big Blue” was one of Buffett’s “big four” holdings along with Coca-Cola, Wells Fargo and American Express.

The wonks at the Bureau of Labor Statistics conjured 164,000 new jobs for the month — a meager figure, and less than expected. The unemployment rate declined to 3.9% — lowest since December 2000 — after holding steady at 4.1% for the previous six months.

Wage growth? Still stuck in low gear, which makes it less likely the Federal Reserve will accelerate its pace of interest rate increases.

The real-world unemployment rate as measured by Shadow Government Statistics comes in at 21.5% — the lowest since mid-2010.

Don’t be surprised if new trade-war rumblings take another bite out of the stock market, warns Jim Rickards.

Today’s the second day of talks between U.S. and Chinese officials in Beijing. “The U.S. delegation includes every senior official with line responsibility for trade issues,” says Jim. “The composition of the delegation is President Trump’s way of announcing the negotiations are of the utmost importance and that he expects results.”

While Treasury Secretary Steve Mnuchin has top rank, the most influential player is U.S. Trade Representative Robert Lighthizer — a veteran trade warrior going back to his days in the Reagan administration.

“Lighthizer lives in Palm Beach, Florida, not far from President Trump’s getaway estate at Mar-a-Lago,” Jim explains. “This makes it convenient for Trump to invite Lighthizer aboard Air Force One when he leaves Washington, D.C., for a weekend visit to Palm Beach. Lighthizer takes Trump up on his offer as frequently as possible. This gives Lighthizer valuable one-on-one time with the president outside the White House glare that most other Cabinet officers and West Wing advisers can only dream about.”

Too, Lighthizer keeps a low profile — not a bad idea working for a boss who keeps a very high profile.

“For its part, China says it will not be bullied,” Jim goes on.

“China feels its economy is sufficiently strong and resilient enough to weather a trade war with the U.S. China can always buy soybeans from Canada and aircrafts from Airbus. China is betting that the U.S. has more to lose than China if the trade war escalates.

“China is wrong on both counts. Both sides may lose in a trade war, but China has far more to lose. Trump has already weaponized CFIUS, a group that reviews takeovers of U.S. companies from a national security perspective, to prevent Chinese acquisitions of U.S. technology firms.

“China is living under a mountain of debt. Any forced decline in China’s trade surplus with the U.S. will slow the Chinese economy, increase unemployment, jeopardize debt service and possibly lead to the kind of social unrest the Communist Chinese most fear.”

Jim’s bottom line: A trade war is still on. ”The U.S. will win, but there may be a lot of collateral damage in markets. Stocks and the dollar could both head lower as a result.”

Sometimes the road to legal recreational marijuana is even harder than it first seems.

Maine was one of four states where voters approved recreational weed in 2016 — along with California, Nevada and Massachusetts. But unlike those other three states, passing a law to implement the ballot result — a tax and regulation regime — has been a slog.

“We are grateful that regulators can now — after months of undue delay — finally begin moving forward with the process of licensing adult-use marijuana sales and regulating this retail market,” says Paul Armentano, deputy director of the National Organization for the Reform of Marijuana Laws.

While 2018 has been a challenging year for many penny pot stocks, interesting things are starting to happen in this high-growth niche sector. Watch this space for updates in the weeks ahead…

Yes, the San Francisco Bay Area has its share of ridiculously overpriced homes… but Seattle is giving it a run for the money… 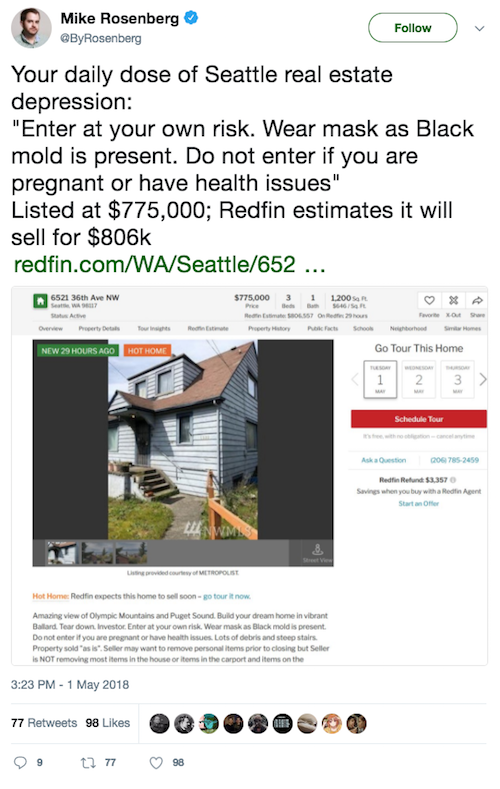 Hmmm… On the surface the home in the Ballard neighborhood is 1,200 square feet, three bedrooms, one bath. Looking more closely at the listing, it’s a tear-down. “Value is in the land,” it says upfront, given the “amazing view of Olympic Mountains and Puget Sound.”

But really, that’s just a microcosm for all of metro Seattle: The Case-Shiller Home Price Index finds home values there up 85% since bottoming in 2012. Only San Fran and Vegas show faster growth.

“Rarely have so many high-profile figures been known to have lost so much money on a single investment,” says this morning’s Wall Street Journal.

Not surprisingly, the fiasco known as Theranos has descended into litigation… and court papers are now revealing exactly who was lulled by CEO Elizabeth Holmes’ song and dance about a machine that could take a finger-prick of your blood and test it for hundreds of diseases at rock-bottom cost.

We’ve been saying all year that we’re in the late boom phase of the boom-bust cycle… and smart people losing fortunes against their better judgment is part and parcel of this phase.

In the previous cycle, Bernie Madoff’s investors collected their 12% a year and never questioned how he achieved such fabulously consistent results. In the cycle before that, respected consultants deemed Enron “America’s most innovative company” in Fortune magazine. And on and on.

Theranos is still a going concern for the moment, but the Journal reports most of the remaining staff will be history by next month and the firm will be liquidated by August. Holmes, as we mentioned in March, got one of those sweetheart deals from the feds in which she pays a pittance of $500,000 and admits no wrongdoing.

Wanna bet she reinvents herself as a motivational speaker, telling us about all the “lessons learned” from her experience? Ugh, we can just see it now…

P.S. Only a few more hours remain in which you can learn how to instantly “lock in” $52,000 of legally guaranteed income checks from some of America’s top companies.

It takes only three minutes and four mouse clicks. Follow this link and see for yourself. But do it now — the link goes dead tonight at midnight.