The Only Pot Stocks You Need

“As we push towards the second half of 2018, there’s one truth you can hang your hat on…The marijuana boom has just begun,” so says Ray Blanco. 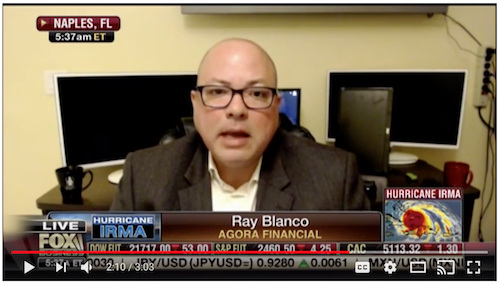 Ray points out three wave-makers in the marijuana space:

#1 “A new flood of opportunity is opening up in Colorado,” says Ray.

Colorado lawmakers “passed a bipartisan bill that would, for the first time, allow publicly traded companies to invest in or hold a medical or recreational marijuana license in the state, starting next January,” according to an article Marijuana Business Daily.

At the heart of the legislation is the withdrawal of old rules limiting Colorado pot companies to 15 out-of-state owner or Series investors. Sorta arbitrary, don’t you think?

“Increased capital,” Ray says, “no matter what the industry, is good for business.

“Colorado’s law change should create a wealth of new opportunity in one of the most mature pot economies in the U.S.”

“Another good sign for folks with positions in the cannabis industry is the marked increase in mergers and acquisitions.”

We told you Tuesday about the combo of two major Canadian players, Aurora Cannabis and MedReleaf Corp. But Ray says an even more recent merger could be a “game changer.”

“According to a recent press release, Baker Technologies, Sea Hunter, Briteside and Sante Veritas Therapeutics, will merge to form a pot conglomerate under the new name TILT Holdings.”

The merged company plans to list on the Canadian Stock Exchange and expects to make $70 million in 2018 and $200 million by the end of 2019.

Meanwhile, Ray is spotting “another potentially lucrative opportunity to latch onto in the booming marijuana industry.”

“Oklahoma is up first with a vote on its medical marijuana initiative taking place in June, says Ray.

“Missouri and Utah follow next with similar medical marijuana initiatives going to ballots in November.

“Michigan will vote on its recreational marijuana initiative in November as well.”

Marijuana Business Daily says if the measures pass, they “will infuse hundreds of millions of dollars in business opportunities into what is already a multibillion-dollar industry in the United States.”

If you own pot stocks, are curious about them, or are still on the fence – click here now to see Ray’s prediction about the last pot stocks you’ll ever need.

And these pot stocks aren’t Canadian…they aren’t on the mainstream’s radar…they are penny-stock cheap — but not for long.

Learn how a small starting stake turned into $1.2 Million… And how it could happen again by June 7. (That’s less than three weeks from now.)

All’s quiet in the markets as the week winds down.

The small-cap Russell 2000 index is trying for a third straight record close. Crude is pulling back a bit after approaching $72 a barrel yesterday. Otherwise there’s not much to say, so we’ll move on…

“The Middle East doesn’t stand a chance against the might of the American oil industry!” says Alan Knuckman, following up on his $100 oil forecast yesterday.

Alan points out the United States recently surpassed Saudi Arabia as the globe’s No. 2 oil producer. (Russia is still tops — for the moment.)

“The U.S. pumps out a little over 10 million barrels a day,” he says, “while the Saudis are around producing 9.5 million.

“Even though the Saudi Kingdom could produce 12 million barrels, they are restricted to do so because of OPEC-mandated production cut agreement set last year. Since the U.S. isn’t bound by OPEC, the U.S. can drill to their heart’s desire… And we don’t plan on stopping!”

As we go to virtual press, this week’s Baker-Hughes rig count just crossed the newswires. We stand at 844 rigs actively drilling for oil in the United States, the same as last week. Well, after the last six weeks we were due for a rest… 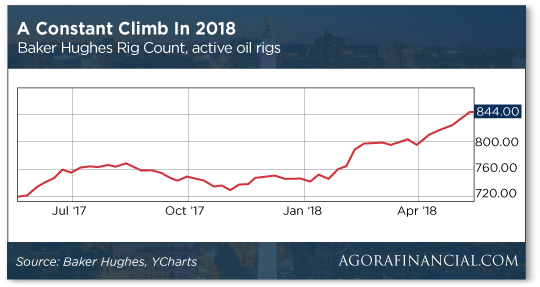 But that one-year chart doesn’t tell the whole story. “The index bottomed out just above 300 in 2016, when Saudi Arabia tried to put the U.S. oil industry out of business,” says Alan. “Since then we’ve more than doubled the number of rigs actively drilling for oil — and the number keeps climbing! Also, there’s plenty of room for this statistic to keep moving higher.”

“A Florida county tax collector has partnered with bitcoin payments processor BitPay to accept cryptocurrency for a variety of services,” according to an article at Coindesk.

“The office decided to accept the cryptocurrencies in an effort to streamline fee collection, reduce the potential for fraud and identity theft and increase the transparency and accuracy of payments,” says Coindesk.

“The aim of my tenure in office is to make our customer experience faster, smarter and more efficient,” says Mr. Greenberg, “and to bring government services from the 18th century into the 21st century and one way is the addition of cryptocurrency to our payment options.”

The partnership with Seminole County signals BitPay’s first government collaboration and Bitpay’s head of compliance, Jeremie Beaudry, believes it won’t be the last.

“With the Seminole County Tax Collector’s office,” he says, “we have engaged our first government agency to accept bitcoin and bitcoin cash by making it easy and seamless for them.”
Arizona and Georgia sponsored bills in their state legislatures this year “that would allow citizens to pay their state tax liabilities in bitcoin and other cryptocurrencies.” Both bills stalled.

As for the question of price volatility, Mr. Greenberg doesn’t foresee any “risk to the County.”

[Ed. Note: Our thanks to colleague Andrew Keene for passing along that item. This week, Andrew took the wraps off an options trading system with a twist. All you need to do is copy and paste a few codes… and within days you could be $6,740 richer. Maybe more.

Access to this system closes tonight at midnight, so you’ll want to click here and check it out right away.]

The funding gap in state pensions nationwide now totals $1.4 trillion, according to new figures from the Pew Charitable Trusts.

That’s a huge figure, but it’s the state-by-state variations that matter to you. Poorly-funded plans raise the risk you’ll be on the hook for a bailout during the next downturn.

This week the Tax Foundation took Pew’s figures and calculated the funding ratio of public pensions in each state. The ratio is “calculated by measuring the market value of state pension plan assets in proportion to each state’s accrued pension liabilities,” says the organization’s Katherine Loughead. Lower numbers are a warning flag… 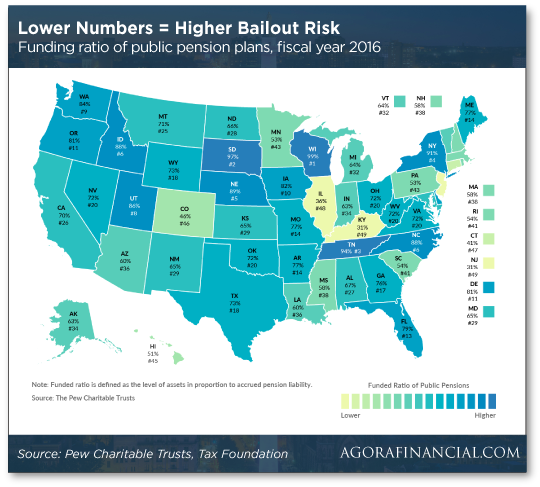 “Pension plans in Wisconsin, South Dakota, and Tennessee are in the best shape,” Loughhead writes, “with funded ratios of 99 percent, 97 percent, and 94 percent, respectively. On the other end of the spectrum, states with the most strain on their pension plans are New Jersey and Kentucky (both only about 31 percent funded), and Illinois, with a plan that is 36 percent funded.”

Florida, we see, is in fairly good shape… despite the item we’re about to relate…

“Scot Peterson, the sheriff’s deputy vilified for failing to confront the Parkland school shooter, has begun receiving a state pension,” says an article at the Fort Lauderdale Sun Sentinel.

“Peterson resigned and retired Feb. 22, a week after the massacre at Marjory Stoneman Douglas High School,” the article continues, “where he waited outside as Nikolas Cruz killed 17 people and wounded 17 others.”

Peterson joined the Broward County Sheriff’s Office at age 22. Now 54, he’s entitled to pension payments based on seniority and an average of his five highest-paid years. As of April, that works out to $8,702.35 a month.

Not too shabby…especially considering his job performance as a School Resource Officer on that tragic day in February.

“Surveillance video showed Peterson waiting outside the school as Cruz prowled the halls with an AR-15 rifle.”

Such cowardice led to a dressing down from POTUS and Peterson’s commanding officer, Sheriff Scott Israel, who said Peterson should have “went in. Addressed the killer. Killed the killer.”

Easier said than done? Sure, we get it. But 32-years of experience should have resulted in…well, anything other than taking cover outside while kids were dying inside.

As for Peterson’s pension, that’s a sure thing. The only reason pensions can be revoked — according Florida’s handbook — is for crimes that “breach the public interest” such as embezzlement, theft, bribery, and child sexual assault.

But his pension might be in jeopardy after all….

“Peterson was sued last month by Andrew Pollack, whose daughter Meadow died in the shooting,” the Sun Sentinel says.

When he learned of the pension, Mr. Pollack tweeted: “The coward of Broward, Scot Peterson is getting over $8k a month pension! He hid while my daughter and 16 others were slaughtered! How in the hell is he getting this?”

Ahh…that’s the thing with entitlements.

(Well, that was a total downer...We can’t leave you on that “black key” — on a Friday? — so here’s something to lighten the mood.)

This is hilarious: Bankrupt retailer Toys ‘R’ Us wants to pay off debt by selling intellectual property…and some of it’s not exactly kid-friendly!

“Next month, Toys ‘R’ Us is putting its famous mascot, Geoffrey the Giraffe, on the auction block,” says a Reuters article.

That’s not all…take a look at these other domain names the company bought before it hit the skids:

“The ‘R’ Us is the key to the brand, not the Toys,” says brand consultant Bob Phibbs.

Ya think? (Save your consulting fees, folks.)

“Companies like Toys ‘R’ Us often register related domain names to guard against someone hijacking their brand for their own business,” says Reuters.

“They just went crazy,” Phibbs says. “I’m sure they were laughing and drinking Red Bull and then just came up with every iteration they could.”

(We prefer imagining something more bacchanalian…akin to Wolf of Wall Street at Toys ‘R’ Us headquarters.)

At any rate, we don’t even wanna know what becomes of poor Geoffrey the Giraffe…

P.S. Tired of watching others get rich, while you struggle to make ends meet?

That all ends today. Ray Blanco has a new pot play that could be “the last stock you’ll ever need to own.”

It’s time to get real about your financial future. Click here right now and start on the path to your brand new future today.