When Bigger Isn’t Better (That Would Be Now)

“I’m becoming more and more excited about the strength in small-cap stocks this year,” says Zach Scheidt, now recovered from his sojourn to the MoneyShow in Las Vegas last week.

“While the large-cap S&P 500 is only up 1.5% so far this year, small-cap stocks have been much stronger. For instance, the S&P SmallCap 600 Index has grown investors’ wealth by 7% this year. 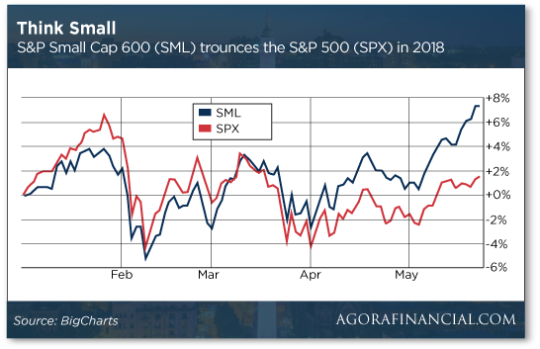 “And that’s just an index,” he hastens to point out. “The best small-cap stocks have done much better. And that trend should continue throughout the year.”

Why the outperformance? Several reasons…

“Small-cap stocks are much more likely to be doing most of their business in the United States,” Zach reminds us. “Which means these companies will benefit not only from our strong domestic economy, but also from this year’s corporate tax cut.

“Small companies are also much more nimble than big corporations. So these companies are more quick to adjust their businesses to take advantage of new growth opportunities.”

“It’s a great time to be investing in these high-growth names,” Zach concludes. Which is exactly what he’s urging readers of his newest premium advisory to do, using what he calls “the talking stock chart.”

This unique tool — Zach discovered it during his hedge fund days — has the potential to fatten your account by as much as five figures in only a week. And that’s just with plain-vanilla stocks — no options or anything exotic.

See how it works at this link — but do so now, because his next trade recommendation is due tomorrow and this presentation goes dark tonight at midnight.

“The Fed has it wrong again,” warns Jim Rickards.

“If you have defective and obsolete models, you will produce incorrect analysis and bad policy every time.” Case in point: Throughout most of the weak post-2008 recovery, the Fed has consistently overestimated future economic growth… and then had to change plans.

Now there’s a new risk with the Fed’s “quantitative tightening,” underway since last fall. The Fed is reducing its bloated balance sheet. The Fed is operating on the assumption that the resulting reduction in money supply will have no adverse impact on the markets.

We said a few days ago that trouble is erupting in emerging markets. By some measures it’s the worst in five years.

But Fed chairman Jay Powell is unconcerned. “There is good reason to think that the normalization of monetary policy in advanced economies should continue to prove manageable,” for emerging markets, he said last week at a conference in Zurich.

“The EMs are already in distress,” Jim counters. “Just ask Argentina, which turned to the International Monetary Fund recently for emergency rescue loans.” Turkey is in major distress, too.

“The situation in EMs will get worse before it gets better and the Fed will be the last to know,” says Jim.

But in the meantime, most major asset classes are quiet today.

There’s no obvious catalyst for the latest jump. Venezuela is still a basket case, and Iran sanctions still loom. AAA says the national average price for a gallon of regular unleaded is $2.93. That’s a 12-cent jump in 14 days; fuel for a Memorial Day trip will be its most expensive since 2014.

“The semiconductors are… [an] important tech industry we’ve watched to get a feel for market direction,” says chart watcher Greg Guenthner.

As a benchmark, Greg keeps his eye on the VanEck Vectors Semiconductor ETF (NYSE: SMH), where he’s noticed a recent bounce… after a near-breakdown earlier this month: 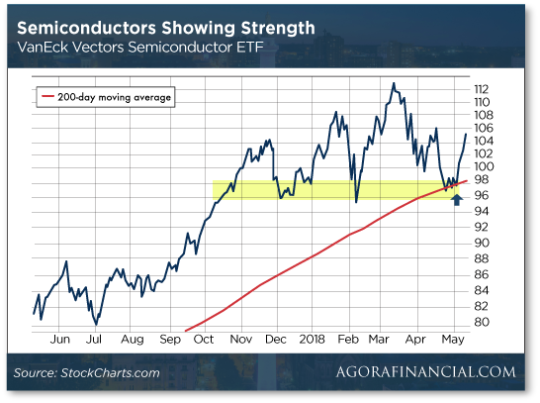 “After strong action from industry leaders like NVIDIA Corp. (NASDAQ: NVDA),” Greg notes, “we were treated to a picture-perfect bounce.”

And “these stocks bounced exactly when we needed it most… It’s hard to get too bearish when the semis are streaking higher once again,” Greg concludes.

Amidst the glitz and glamor of the week (Lambos, rappers and diamond-studded crypto wallets), CoinDesk hosted its fourth-annual blockchain summit it calls “Consensus.”

Here are Kamal’s takeaways from the event…

“Clearly, the influence of cryptocurrency has spread worldwide… it’s no longer possible for any one country or regulatory body to stop it completely.”

Of course, everyday crypto investors checked in at the summit… but also in attendance? Companies like IBM, Hewlett-Packard, Deloitte and Federal Express showed up to present how they’re leading the way in blockchain solutions.

“Large companies will drive adoption,” says Kamal. “They have the money for research and product development.

“They are also forming consortiums to study best practices,” he continues. “This is the precursor to large-scale adoption.”

Cryptocurrency wallet company Ledger announced its “Ledger Vault.” And Kamal says: “This may be one of the most important releases of the conference.

“The Ledger Vault will be one of those solutions. This release prepares the market for big money to enter,” he says.

Kamal’s prediction for 2018? “This will be the year of regulation, of institutional money coming into the system and of people starting to produce on the promises of their ICO.

“In that process, many will fail, and the markets will fluctuate.”

As Kamal said here a few weeks ago, if the rise of crypto is like a baseball game, we’re only in the second inning. “It’s time to accumulate the best cryptos at discounts and add to them at dips.”

Stupid supermarket chain tricks: We present the following Facebook post — from the proud mom of a graduating high school senior in Charleston, South Carolina — with no further comment: 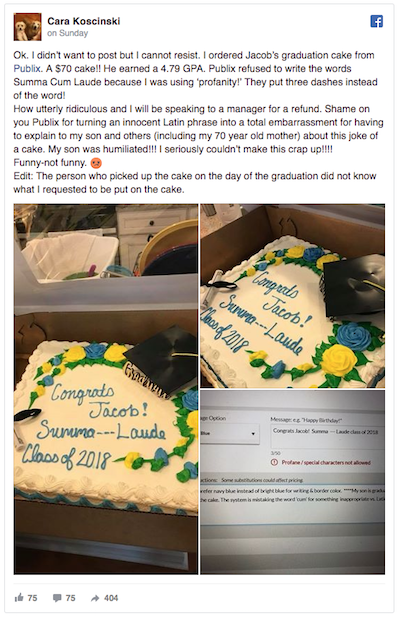 On the topic of the growth in the U.S. oil rig count, a reader writes:

“A report from the Post Carbon Institute argues that the Energy Information Administration is overstating the potential of U.S. shale, calling the projections ‘highly to extremely optimistic, and are therefore very unlikely to be realized.’

“The report argues that while U.S. oil production has doubled from 2005 levels, and shale gas has also exploded over the same timeframe, there are underlying problems that will always bedevil shale production. For instance, shale wells typically see production deplete by 70–90% in the first three years, while conventional fields see output drop off by about 20–40% per year without new drilling.

“That means that the industry has to constantly plough more money back into production, just to keep output flat.”

The 5: Depletion rates are a big deal in the shale patch, that’s for sure.

In addition, don’t forget the Saudi royal family’s major miscalculation in late 2014 when they prodded OPEC to keep producing all-out, driving down the oil price in the hope it would bankrupt the shale guys. Yes, some of them did end up ruined. But the technology kept getting better and better… and many deposits became profitable even with $40 oil.

And if oil goes to $100? Then the real problem will be building out the pipeline infrastructure to get the newly produced oil to market; that’s already happening in the Permian Basin in Texas.

“Curtailed vs. unloading is not the same thing,” a reader wishes to point out after we tried to pour cold water on the scare talk about China reducing its stash of U.S. Treasuries.

“So with the former China doesn’t have to dump anything. They can just reduce how many they roll over at maturity, choosing instead to redeem a certain percentage of the ones reaching maturity.”

The 5: Isn’t that what the Fed is doing right now with “quantitative tightening”?

Yes, that will likely have the effect of slowing down the economy, eventually — certainly that’s Jim Rickards’ contention — but it’s hard to see how mere “curtailing” is a sword of Damocles that Beijing holds over Washington…

P.S. It’s jackpot day for Penny Pot Profits readers: This morning Ray Blanco urged them to sell their shares in MedReleaf after the recent buyout announcement by Aurora Cannabis.

Don’t despair if you missed out. Ray says the next big catalyst in the cannabis space is barely two weeks away. Click here and you can read why — there’s no long video to watch.