Marijuana Flexes Its Muscles In D.C.

“Last month the former House speaker John Boehner sent shockwaves through Washington by joining the board of Acreage Holdings, a firm that cultivates, processes and dispenses marijuana in 11 US states,” says an article at The Guardian.

This was a surprising about-face for the former Speaker of the House of Reps who once said he was “unalterably opposed” to legalizing marijuana. (So much for “unalterably”…heh.) 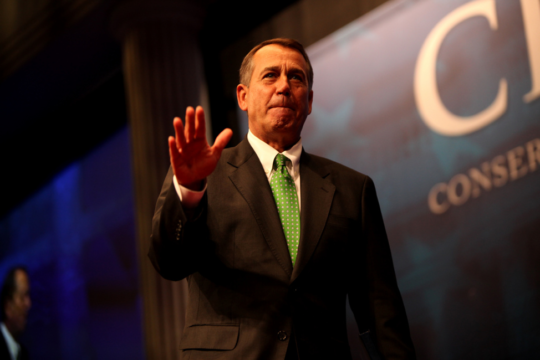 Hello, marijuana: Was the green tie an indicator of Boehner’s change of heart?

“My thinking, like that of millions of other Americans, has evolved as I’ve learned more about the issue,” he says.

He points out benefits of medical marijuana to treat opioid addiction and help veterans struggling with mental and physical illness.

And descheduling marijuana, Boehner contends, “will reduce the conflict between federal policy and state programs.”

In light of the ongoing federal – state tension…

“More than 200 cannabis industry leaders descended upon Washington this week in the hopes of persuading the US Congress to embrace the growing movement for marijuana legalization,” The Guardian continues.

“Sporting pins with a green cannabis plant at the center, the marijuana business owners and advocates bustled between the hallways of the House and Senate, meeting with hundreds of congressional offices and rallying on the Capitol lawn over a three-day lobbying tour organized by the National Cannabis Industry Association.”

When you think marijuana rally, you might picture this… 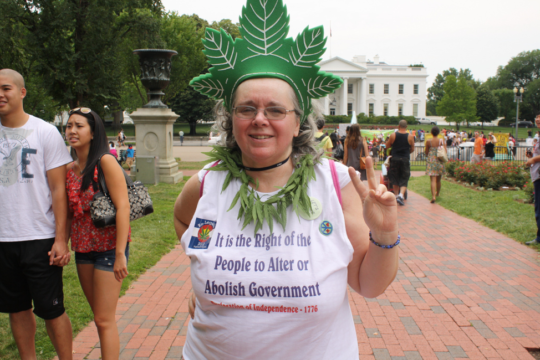 Not on your life.

“There’s an air of legitimacy around our group that makes me hopeful that the stigma is going to fall away,” cannabis attorney Blake Mensing told The Guardian

“The event, which brought members representing 23 states and the District of Columbia, was not the first of its kind.

“But the advocates hailed a new front in the battle for federal marijuana reform against the backdrop of a rapid evolution on how the issue is perceived in the nation’s capital.”

According to a Pew Research Center survey from October, 2017, 6 in 10 Americans support legalization. The tides are certainly turning in marijuana’s favor.

And with marijuana’s growing legitimacy — plus shedding its burnout image — Ray Blanco believes: “2018 could be the biggest year yet for pot…And U.S. pot stocks are flying right now.” 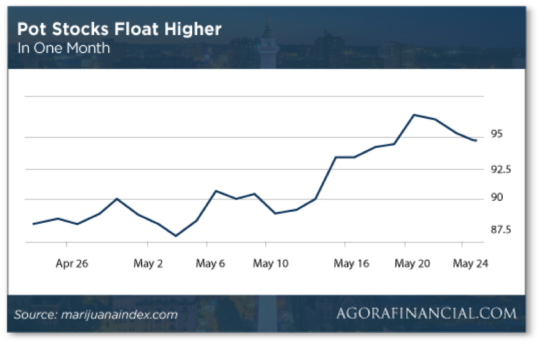 The U.S. Marijuana Index, compiled by Marijuana International Corporation, has been around since 2015; it tracks 17 of the “leading cannabis stocks operating in the United States,” according to its website. The index now has a market cap of 7.3-billion dollars.

“Constituents must have a business strategy focused on the marijuana or hemp industry,” the website says, “and are required to meet our…trading criteria.”

Think of it as the Dow Jones of the marijuana space…heh.

So back to pot stocks…and why are they blowing up right now?

“The data in favor of legal weed is too strong,” he says.” The anti-pot camp is out of legitimate arguments against legalization.”

To that end, we had major news from Congress…

This is a large-scale victory for medical marijuana.

As Ray sees it, pot-stock investors can rest easy, knowing their “money is safe from any threat of a federal crackdown.”

Now we turn to California where recreational marijuana became legal in the Golden State on Jan. 1, 2018.

For the most part, the opposite proved true. Marijuana Business Daily notes the new rules are mostly “business-friendly.”

Here are a few of the most common-sense regulations:

So some of these regulations are pretty down-to-earth…but as Dave noted yesterday, taxes and regulations might put a stranglehold on California’s pot profits — all the way around…from growers, to dispensaries and beyond.

Ray sees things from another point of view. He believes a level of regulation provides some stability to the nascent legal marijuana market.

In terms of the medical use of marijuana, Ray’s take is the “FDA offers an extra level of protection to medical marijuana companies and their stocks.”

The reason? “It’s three levels of compliance and protection that virtually guarantee your money is safe from any threat of a federal crackdown.”

Ray sees a new catalyst coming for a select group of penny pot stocks just two weeks from now. Three days ago he urged his premium subscribers to collect 178% gains in eight months from a Canadian pot play. Now he’s anticipating even bigger and faster gains on a handful of U.S. firms — and it all begins as early as June 7. Check out his up-to-the-minute research right here.

Word emerged from Russia overnight that Russia and the OPEC nations might rethink their production caps to make up for collapsing production in Venezuela and renewed U.S. sanctions against Iran.

For now it’s all talk — any decisions probably won’t come until an OPEC meeting next month — but a barrel of West Texas Intermediate has fallen from over $71 to $68.49 at last check.

The major U.S. stock indexes are flat compared with yesterday’s close. After we hit “send” yesterday stocks recovered much of their knee-jerk losses triggered by Donald Trump canceling the summit with North Korea’s Kim Jong Un. This morning there’s word it might be back on again; the few traders who haven’t already knocked off early for the holiday weekend are too exhausted to care.

“As California’s cities flounder under the rising cost of public pensions, they shouldn’t expect the state to extend a hand,” according to an article at Bloomberg.

In a story we’ve been following at The 5 for months, the Golden State’s municipal pension system comes under fire…with no hope of rescue.

In his revised May budget, Governor Jerry Brown acknowledges the mounting debt crisis in the state. He goes on to say, “California’s local governments are facing even greater pressures in accommodating…rising costs [of pensions].”

“[Brown] said it’s not up to the state to help,” Bloomberg says.

“A lot of cities signed up for pensions they can’t afford,” the governor said at a Sacramento budget briefing. “I don’t think the state is in a position, as far as I can see, to step in the shoes of mayors and supervisors.

“They’re going to have to handle that themselves,” Brown went on to say.

“Brown’s position underscores the challenges facing local governments,” says Bloomberg, “whose resources are more limited than that of states in addressing the rising costs of keeping promises to police officers, teachers and other civil servants.

“Investment losses, contributions failing to keep pace with the cost of benefits, and changes in assumptions such as mortality rates have left many public pensions across the country with less than they need to cover obligations.”

Which leads to this question, posed by Joel Fox of the “Fox and Hounds” California politics website: “If the state won’t help, what will cities do?”

If the state won’t grant permission to adjust pension formulas for current employees, “local governments and interests like public employee unions… will undoubtedly look to the taxpayers for help through ballot initiatives.”

“Improperly stacked wood. A cracked driveway. Chipped paint on a porch…These are the kinds of offenses the government of Doraville, Georgia, is using to fine residents and threaten them with jail,” says an article at Reason.

The tiny town — population 8,000 — is unapologetic about raising municipal revenue by imposing fines for everything from traffic violations to backyard weeds (seriously).

In a 2015 Doraville newsletter, government officials bragged: “Averaging 15,000 cases and bringing in over $3 million annually, the court system contributes heavily to the city’s bottom line.

“Now people hit by some of those fines are suing the city in federal court, arguing that its direct financial interest in convicting people tried by its municipal court violates the 14th Amendment’s due process guarantee,” says Reason.

Let’s take a look at the casefiles of these hardened — er, hardly — criminals:

“The Institute for Justice,” representing the four plaintiffs in court, “argues that Doraville’s practice of building ticket revenue into its budget, which encourages enforcement efforts aimed at meeting the target, violates the due process rights of the people.”

The Constitution and ethics aside: This might be just the ticket (heh) to raise revenue for California’s ailing pension system…

In a follow-up to Wednesday’s story about the premature Trump-Kim “challenge coin,” social media’s caught wind of the White House’s faux paus commemorating the summit that’s since been canceled…or has it?

There was so much traffic to the official White House Gift Shop website yesterday, that this page crashed: 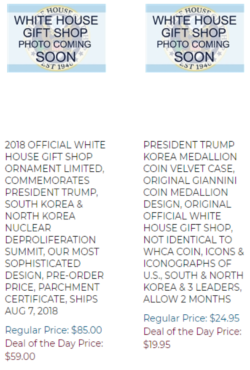 Then we found this hilarious addendum: 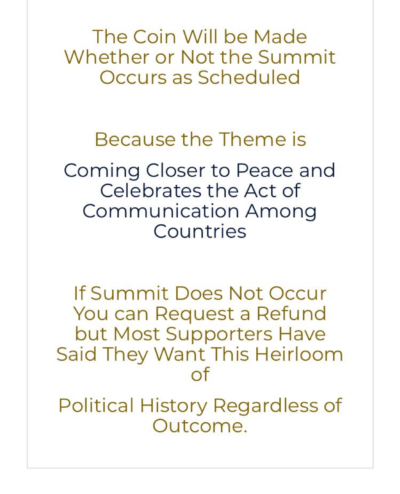 While we have no idea what will transpire by the time you read this — Trump’s intimating the summit might be on again — the gift shop website assures you can have your bauble commemorating North Korean denuclearization by August…and at “Deal of the Day” prices!

So for the political history buff in your life, this might be just the thing for Christmas.

P.S. We’re back tomorrow to wrap up the week as usual with 5 Things You Need to Know. U.S. markets will be closed on Monday for Memorial Day, so the weekday edition of The 5 returns on Tuesday.