The Real Threat To Your Social Security Benefits

“I’m doubtful (but hopeful) that maybe with us boomers dying earlier, and growing numbers of younger workers, that Social Security’s life span might stretch out a bit,” writes a reader.

We begin a new week picking up on an item from last week — the government numbers that point to falling U.S. longevity for a third straight year. Nothing like that has happened in a century.

The numbers fit into a longer-term trend we’ve been tracking since 2014, to which we gave a cheeky name — “the awful way Social Security might be ‘saved.’”

Our reader points us to another factor that might prop up Social Security longer than you might think — the sheer size of the millennial generation and the generation coming up behind it.

“The oft-cited ratio of the workers to Social Security recipients might be on a slower downtrend than earlier estimates,” he suggests.

You’re probably seen the numbers before — how there were 17 workers for every Social Security recipient back in 1950, there are barely three today, and it’ll be down to two by 2030.

But the reader points us to a recent post by finance writer Urban Carmel. “The working age population in the U.S. continues to grow,” Mr. Carmel asserts at his Fat Pitch blog.

And while immigration accounts for some of that growth, “the more important aspect is this: The millennial and Gen X birth cohorts (those born after 1980 through early 2000s) are almost twice as large as the boomers… Millennials are the largest living cohort in America, overtaking the remaining boomers, and the youngest of them are now just entering their prime working age… 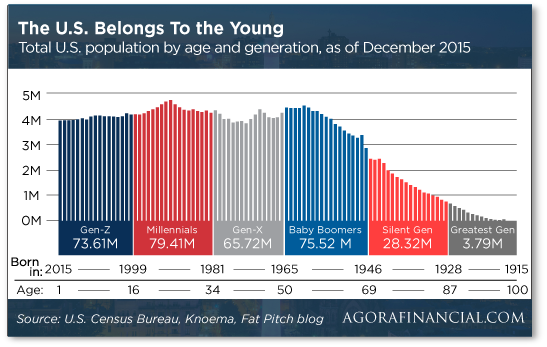 “Behind the millennials is Gen Z, a group almost as large as the boomers,” Carmel continues. “This oldest of this group enters their prime working age next year. Together, Gen X, millennials and Gen Z are three times larger than the boomers. The midpoint of this group does not enter retirement age until 2055.”

So it’s all good, right? Look at all those people represented by the red and green lines on the left. There’s another reason Social Security will keep humming for decades, right?

Well, maybe. But there’s a factor you can’t afford to ignore.

The real threat to Social Security nowadays is the explosion in disability benefits.

The number of Americans on Social Security disability has grown from about 4 million in the late 1980s to 10.4 million as of 2017. 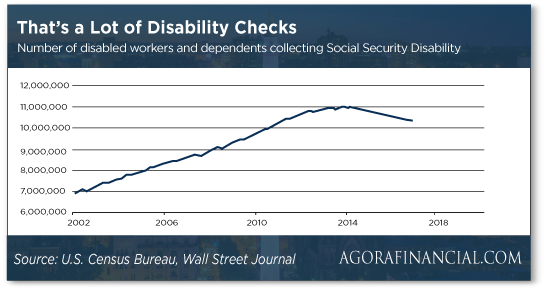 Yes, the number has plateaued; it’s harder to get approval for benefits than it used to be, and approval takes longer. But on the other hand, as the Urban Institute points out, “Once on Disability Insurance, few people actually leave the program.”

The disability trust fund, on the other hand, has only until 2022. Four years from now. At that point, benefits will have to be cut 20% so the program can stay solvent.

Key point: Politicians won’t hesitate to raid the old-age and survivors bucket of Social Security to shore up the disability bucket.

That’s exactly what President Obama and the Republican Congress did in 2015. The disability trust fund was at risk of being exhausted the following year.

Solution? They killed the “file and suspend” strategy many couples (and divorced women) were using to maximize their old-age benefits. They changed the rules in a way that affected millions of people, and they did it with only six months’ notice.

And it still bought only a few more years; as just mentioned, the disability trust fund is on track to be exhausted by 2022. How will the rules be changed then?

We don’t know the answer to that question. But something’s gotta give — even if boomers are still working and paying into the system, Xers are dying off, and millions of millennials and “Gen Z” members are coming up through the ranks.

Plan accordingly. (Here’s one of our preferred solutions to secure your retirement.)

Stocks are tumbling on this first day after the holiday weekend. The mainstream attributes the drop to… [spins the Magic 8-Ball]… trouble in Italy.

Two weeks ago, we told you about what was going down in debt-laden Italy. In March, parliamentary elections had a fuzzy outcome. By this month, a left-populist party joined up with a right-populist party to form a coalition government. Among the things they agreed would be a good idea — demanding the European Central Bank cancel a $295 billion debt owed by the Italian government to the ECB.

We figured it would be too much for the powers that be in Europe. Now they’ve struck back in brazen fashion: Italy’s president has blocked the parties from forming a coalition, and he’s appointed a hack from the International Monetary Fund as prime minister. (For real.) Chances are good that Italians will go back to the polls in September.

We already see where this is going.

From time to time, various treaties are signed that tighten the bonds of the European Union. The treaties are then submitted to referendum in each member country. Occasionally, voters in outposts like Denmark or Ireland will reject the treaty. Inevitably, the power elite insists on holding the referendum over and over until the “right” outcome is achieved. This is the template that will now be applied to Italy’s parliamentary elections.

But in the meantime, the “safety trade” is in force.

Stateside, the Dow is down 450 points. Frightened money is flooding into U.S. Treasuries, pushing yields down; the yield on a 10-year note is now its lowest in six weeks at 2.81%. Gold is benefiting as well, the bid back above $1,300.

Crude’s tumble that started Friday has continued in electronic trade yesterday and in the trading pits today.

At last check a barrel of West Texas Intermediate is $66.04. That’s a $5 drop since Thursday — and all because of rumors, not confirmation, that OPEC and Russia would lift their production caps.

Hmmm… As we’ve pointed out now and then, the futures markets are such that there are 100 “paper barrels” of oil trading for each barrel of the real thing. That leaves a lot of opportunity for funny business.

The on-again, off-again tariffs against Chinese goods are on again.

“The White House said in a statement that the United States would move ahead with its plan to levy 25% tariffs on $50 billion of imported Chinese goods,” says The New York Times. The final list of goods is due by June 15, and the tariffs would go into effect shortly thereafter.

But over the weekend, the Financial Times had a compelling description of the White House’s endgame: “Washington is pressing Beijing to enter into multiyear contracts to buy U.S. agricultural and energy imports… The move could mean taking Chinese business away from key U.S. allies such the EU, Australia, Brazil and Argentina, whose exports could be hit by President Donald Trump’s gambit.”

If that sounds familiar, it’s very much how Jim Rickards described the endgame here in The 5 last month: China would “buy more stuff directly from us (such as soybeans, aircraft, other agricultural products, etc.). This comes at the expense of other providers such as Canada, South Korea, Europe and Brazil. Too bad for them.”

From London, a new front has been opened in the War on Cash… 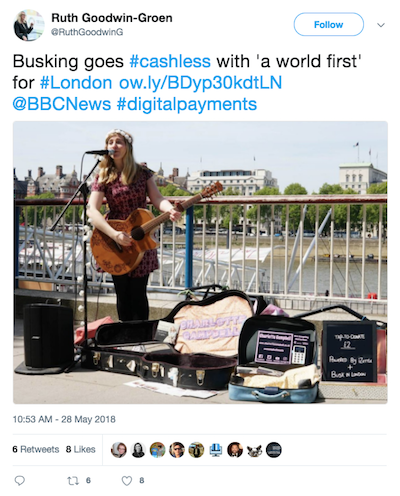 “Companies Busk and iZettle, a Swedish tech firm recently bought by PayPal, are making it possible for people to support buskers and street artists in London with contactless payments over the coming months,” reports the tech site CNet.

“In addition to tossing loose change into a box, passersby can use card readers to make contactless payments,” says the BBC.

The woman in the picture above, a full-time street performer named Charlotte Campbell   , just wrapped up a two-week trial; she says the system “had a significant impact on contributions.”

We’re surprised it’s taken this long: In January 2016, we spotlighted a panhandler in Detroit who took credit cards, using a Square reader attached to a smartphone…

We end where we began, with the fellow who’s kinda-sorta optimistic about Social Security’s future. He had more to say, and we share it here…

“I’m hitting 62 in September 2019 and will be taking early benefits in expectation that later bennies are ‘on the block’ by a decade later — getting it while I can.

“I’m in the group that has also stashed away a reasonable chunk in precious metals, and also have modest balances in IRAs — definitely hoping we’re heading to that next PM bull/dollar bear.

“I’m in the crowd that seriously doubts any ‘fixes’ are on the horizon given we voters continue to populate the federal government with ‘kill the government’ Repubs.

“I have several kin in my generation that have been voting Repub tax cuts for decades now but have absolute faith that they’ll receive free Medicare for the ending 20–30 years of their lives.

“These are smart, educated people who spout the right-wing email blather year after year after year but are breathing sighs of relief that they’re at or near age 65 so they don’t have to pay for Obamacare (or something like it) anymore. And they think all our federal budgetary woes will be solved by cutting foreign aid. Unfortunately, lots of people can’t even read a pie chart of the U.S. budget.

“What’s that line? ‘Clowns to the left of me, jokers to the right, here I am, stuck in the middle with you.

“Thanks as always for the irreverent banter.”

The 5: As “optimistic” as we are, relatively speaking, about Social Security… Medicare and Medicaid are headed for disaster. And as we documented in February, the ship is accelerating toward the iceberg thanks to Republicans who conveniently forget about their small-government creed whenever they’re in power.

P.S. Score another winner for Weekly Wealth Alert: This morning Alan Knuckman urged his readers to sell the rest of their position in Intel call options.

Don’t feel bad if you missed out; we call the service “weekly” because that’s how often the trading opportunities present themselves. Click here and see how much they could be worth to you. (If you collect Social Security, you’ll be floored.)