It’s All Downhill From Here

This is what an empire in decline looks like.

“Chinese newborns can look forward to 68.7 years of healthy life ahead of them, compared with 68.5 years for American babies,” says the Reuters newswire — summarizing data from the World Health Organization.

“American newborns can still expect to live longer overall — 78.5 years compared with China’s 76.4 — but the last 10 years of American lives are not expected to be healthy.”

Even more striking is this: The United States is only one of five countries where healthy life expectancy at birth fell in 2016. We’re in good company with the likes of Afghanistan and Somalia.

The life span of a typical empire is about 250 years, in the estimation of the late Sir John Glubb.

Glubb had a front-row seat for the demise of the British Empire after World War II. He was commander of the Arab Legion in what was then called Transjordan. As a bankrupt Britain gave up most of its remaining colonial possessions, he stayed on for a few years in the newly independent Jordan until King Hussein gave him the boot in 1956.

In 1976, as he approached his 80th birthday, Glubb penned an essay called “The Fate of Empires and Search for Survival.” That’s where he posited his 250-year thesis — noting the rise and fall of nearly a dozen empires going back to the 8th century B.C.

The march of technology seems to have no impact on this 250-year span. “The duration of empires,” he observed, “does not depend on the speed of travel or the nature of weapons. The Assyrians marched on foot and fought with spears and bow and arrows. The British used artillery, railways and oceangoing ships. Yet the two empires lasted for approximately the same periods.”

Assuming 1776 as the starting point, the United States is within spitting distance of this 250-year mark. And falling life expectancy isn’t the only signpost of decline…

Consider what went down last week in Russia at the St. Petersburg International Economic Forum.

This event has taken place each year since 1997. In 2005, President Vladimir Putin turned it into an official Russian government thing. He envisioned it as Russia’s own version of the global elite’s annual shindig in Davos, Switzerland — where the rich and powerful would come to rub shoulders.

Now… Remember it’s been U.S. policy since at least 2014 to “isolate” Russia and make it a “pariah state.” And despite the silly accusations of “Russian collusion,” this policy has continued under Donald Trump — who’s stepped up economic sanctions, kicked out scores of diplomats and permanently stationed U.S. troops on Russia’s borders. 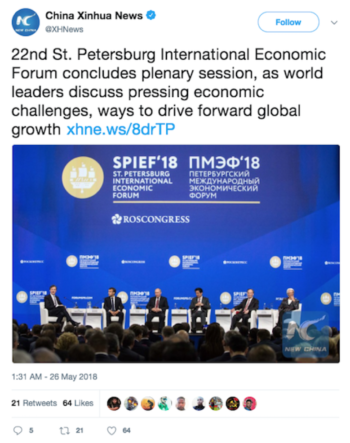 That’s a huge cross-section of the world’s power players. And not one American among them.

Then there’s Donald Trump’s attempt to “isolate” Iran — which is serving only to solidify a de facto alliance among Iran, Russia and China.

For the moment, European companies are still playing ball with Washington’s sanctions; they can’t afford to give up access to the U.S. market and the dollar payments system.

But that’s only clearing the way for Russian and Chinese companies to move in. Yesterday’s Wall Street Journal reported that Sinopec — one of China’s three state-run oil giants — is swooping in to develop an Iranian oil project just abandoned by Royal Dutch Shell. And if France’s Total walks away from an Iranian natural gas project, the likely beneficiary will be another Chinese oil giant, CNPC.

Meanwhile, “Russia,” says the paper, “sees Iran as another platform for the expansion of its oil industry into the Middle East and as a natural if sometimes awkward ally against the West.”

“Ironically the ‘communist’ Chinese seem to understand better than the U.S. that in capitalism you do not threaten your customers,” writes retired Rep. Ron Paul (R-Texas) this week.

“While the U.S. is threatening and sanctioning and forbidding economic relations, its adversaries overseas are busy reaping the benefits of America’s real isolationism… The rest of the world is increasingly simply ignoring the demands of Washington and getting on with its own business.”

Sir John Glubb died in 1986 — but he would surely see the parallels between the British empire in the late 1940s and the United States now.

As Jim Rickards is wont to remind us, the British pound’s decline as the world’s reserve currency was a slow-motion process, stretching from the outbreak of World War I in 1914 to the Bretton Woods agreement of 1944. That’s a 30-year span.

How much time is left? Maybe only weeks, says Jim Rickards. Even if his timetable slips, you’ll want to give serious consideration to this warning he’s issued in a letter he sent to the White House.

The Italy scare is over for the moment and the markets are in a mild “risk-on” mode.

No, nothing’s changed with the situation in Italy. But as we write, the Dow has recovered more than half of yesterday’s losses, resting at 24,600 on the nose. Bank stocks that took it on the chin yesterday are recovering nicely. The small-cap Russell 2000 is back in record territory.

The big economic number of the day is the Commerce Department’s latest guess at first-quarter GDP — an annualized 2.2%, down a touch from the previous estimate of 2.3%. That’s on par with the whole weak post-2008 “recovery.”

Cognitive dissonance: The guy who’s supposed to be the real estate industry’s biggest cheerleader is warning that home prices can’t keep rising at their current clip.

Lawrence Yun, chief economist for the National Association of Realtors, says it can’t go on: “The continuing run-up in home prices above the pace of income growth is simply not sustainable. From the cyclical low point in home prices six years ago, a typical home price has increased by 48% while the average wage rate has grown by only 14%.”

Wow… What a difference 13 years makes.

If you’ve been following Agora Financial’s work for a long time, you know we were among a lonesome contingent in 2005 calling the run-up in home prices, well, not sustainable.

That was in stark contrast to Mr. Yun’s organization, the National Association of Realtors. Yun’s predecessor, a fellow named David Lereah, labeled the likes of us “Chicken Littles.” 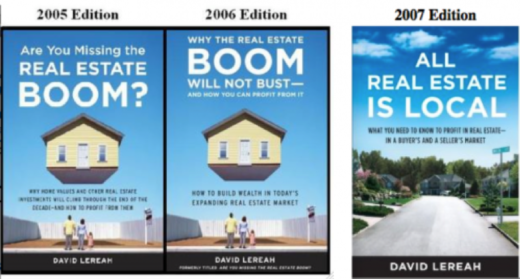 Back to the present: Mr. Yun is also concerned about rising interest rates. A typical 30-year fixed mortgage goes for 4.66% now. That’s the highest since 2011, and way up from the most recent low at 3.78% nine months ago.

Meanwhile, CNBC reports that even while supply remains tight, demand might be weakening: Fewer potential buyers are asking for tours and making offers, according to a monthly survey by Redfin. “April was the first time in 27 months that we saw a year-over-year decline in the number of customers touring homes,” says Redfin chief economist Nela Richardson. Hmmm…

“What a shock. Say it isn’t so,” a reader writes about the news that legal marijuana revenue in California is running less than projected because of the state’s taxes and regulations.

“Once upon a time the president got with his secretary of the Treasury and told him he needed to come up with a way to bring in the money because they weren’t even able to keep the government running without that extra revenue.

“So the Treasury secretary got to noticing there was a mind-altering substance millions of his countrymen didn’t think they could get through their day without. Let’s tax this stuff and problem solved he said.

“But not all the providers of this stuff wanted to go along with paying taxes on this stuff. Some were quite adamant about their refusal to pay taxes on it and went so far as to revolt. The revolt got so serious that they had to send in four columns of regular Army soldiers into the afflicted area. Thankfully no more lives were lost after the soldiers showed up. The principle was firmly established, however, that providers of the mind-altering stuff in question will pay taxes on it.

“But some said nothing doing and left for other places where the government reach wasn’t quite so solid. They left Pennsylvania for Kentucky and after they got there picked up right where they left off. As the years and decades went by they and their families and friends fanned out and went all over the South plying their trade. In fact, their descendants are plying that trade to this day and we call those people moonshiners.

“We are not exempt from the principles history teaches us. The question is do we learn from history? Or just repeat it?”

The 5: During the 1980s, historians turned up evidence the Whiskey Rebellion took place far beyond just four counties in Pennsylvania. In huge swathes of Maryland, Virginia, the Carolinas, Georgia and Kentucky, the whiskey tax went ignored.

Summarizing the historians’ work in 1994, the economist Murray Rothbard wrote, “President Washington and Secretary Hamilton chose to make a fuss about Western Pennsylvania precisely because in that region there was a cadre of wealthy officials who were willing to collect taxes.

“Such a cadre did not even exist in the other areas of the American frontier; there was no fuss or violence against tax collectors in Kentucky and the rest of the backcountry because there was no one willing to be a tax collector…

“The entire American back-country was gripped by a nonviolent, civil disobedient refusal to pay the hated tax on whiskey. No local juries could be found to convict tax delinquents. The Whiskey Rebellion was actually widespread and successful, for it eventually forced the federal government to repeal the excise tax [in the early 1800s].”

“Interesting comments on the risks and mitigators for Social Security solvency,” writes one of our longtimers after yesterday’s 5.

“As your reader yesterday intends, I took retirement benefits at 62½ for several reasons:

“Let’s face it. SSI is the early stage of UBI. We will soon reach the tipping point where the majority of voters will vote themselves free stuff and expect those who have saved and invested to pick up the tab.

“Listen to the angst-ridden rhetoric around labor/wages versus. the capital-rentier class. As tech-driven work participation decreases and inequality increases we can expect jealousy to drive the agenda.”

The 5: Perhaps we’re preaching to the choir… but there aren’t enough people who have “saved and invested” to pay for any of these utopian schemes.

Under the current income tax system you’re considered “rich” if you earn $250,000 or more; that’s when Obamacare taxes kick in, and that level doesn’t get adjusted for inflation.

By one estimate a few years back, the feds could seize every penny of income above $250,000… and it would fund the government for less than five months.