“I’m really hoping that people are a little patient,” says Steven Hoffman, chairman of the Massachusetts Cannabis Commission. “This is brand new.”

In less than a month, Massachusetts will join seven other states where recreational marijuana’s legal. 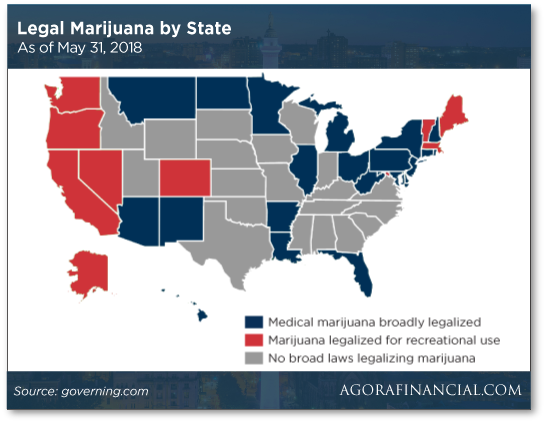 “It’s possible,” however, “that when July 1 arrives, there will be no retail stores open,” reports CBS Boston.

While 38 applications have been submitted to the state, only about a dozen are for marijuana retailers. The rest of the applications are for pot growers and transporters.

A submitted application is just the beginning. Once the state reviews it, the application is passed onto municipalities for zoning approval…and that can take up to 60 days.

“I just want to remind everybody that July 1 is not a legislative mandate. It’s an expectation,” says Hoffman.

Do you think this guy “doth protest too much”? Heh.

We’ll see how things shake out in Massachusetts. But if things go anything like they did in Nevada, it’s going to be a bumpy ride.

Legal recreational weed rolled out in Nevada on July 1, 2017 — exactly one year before Massachusetts expects to do the same.

The Department of Taxation went so far as to issue a “statement of emergency,” endorsed by Nevada’s governor.

At the time, marijuana licenses were only issued to alcohol wholesalers. That became a problem when most booze purveyors failed to apply for licenses.

State officials are in a mild state of panic; legalization has been in effect only 11 days but the school budget for the coming year is already counting on incoming cannabis tax revenue.

If there’s not enough legal supply to tax, that could be a problem. The Tax Commission meeting Thursday ought to be a hoot: “We need more weed for the sake of the children!”

The upshot? To meet the demand for pot — and fill government coffers — the Department of Taxation decided to open licensing to cannabis distributors outside the booze industry.

In light of the debacle in Nevada, we wonder how Massachusetts will fare?

(Interesting that both states nailed down July 1 as the date to introduce legal weed. Think they had 4th of July revelry in mind? Or is it a fiscal year thing?)

Massachusetts might want to enlist the help of this company that’s on Ray Blanco’s radar.

“The company I want to introduce isn’t your typical marijuana company,” Ray says.

“And most consumers are completely unaware of the company’s existence.

“But, those in the marijuana biz know all about MariMed [OTC: MRMD] and the amazing services they offer.

“They offer turnkey solutions to pot cultivators, producers, and dispensaries by specializing in compliance, legal, operational and logistical solutions for securing and operating dedicated marijuana facilities.”

“It makes sense that a company with a strong track record in compliance is finding continued success,” Ray continues.

And MariMed’s fundamentals are sound:

“No small feat for a small-cap like MariMed,” Ray says.

And MariMed’s headquartered in…Massachusetts. Guess who gets a front-row seat to the state’s growing pains as it legalizes recreational pot?

Ray says: “You can rest assured they [MariMed] will be on the short list of every new pot business in the state.

“And that means one thing for sure. Huge new streams of income pumping up their bottom line and their share value.”

[Editor’s Note: MariMed is not one of Ray’s official recommendations but he believes it has a ton of potential.

He advises If you’re going to invest, do your homework and never invest more than you can afford to lose.

And don’t miss out: TODAY, Ray’s pulling back the curtain on some amazing pot-stock winners.

Why today? Canada puts recreational marijuana to the vote and Ray anticipates it’ll boost the marijuana market — dramatically. Your path into this profitable market starts here…]

“Despite the talk of trade wars,” Alan says, “investors have finally realized that first-quarter earning season was fantastic.”

The Dow leaped nearly 350 points late yesterday… and at last check it’s tacked on another 140 today, resting at 25,287. The leadership shown by tech stocks and small caps this week has now passed to the blue chips.

As for other markets, a barrel of crude is selling for $65.79, up over a dollar from yesterday.

Bitcoin’s at $7,693.24 at the time of writing; the crytpo’s price has been pretty stable in recent weeks.

“I like to buy gold on sale,” says Jim Rickards.

“Of course, gold is a highly liquid and heavily traded form of money,” he says.

Jim believes gold is money rather than a commodity. And as such, its price is subject to “technical factors and market manipulation that can cause the price to diverge from gold’s fundamental value…at least temporarily.”

“Manipulation can be caused by central banks seeking attractive entry points or trying to squelch disorderly price spikes,” he says.

And hedge funds “shorting” gold can instigate selling that might lead to a full-scale collapse of gold’s price.

While its price can be manipulated, fundamentals like “supply and demand, monetary economics and the presence or absence of inflationary expectations” ultimately determine gold’s price.

“A gold price that is materially below fundamental value is what I mean when I say gold is cheap or ‘on sale,’” says Jim.

Jim goes onto tell “a compelling story about the likely path of gold prices for the near future.”

Take a look at the chart below from the Federal Reserve Bank of St. Louis: 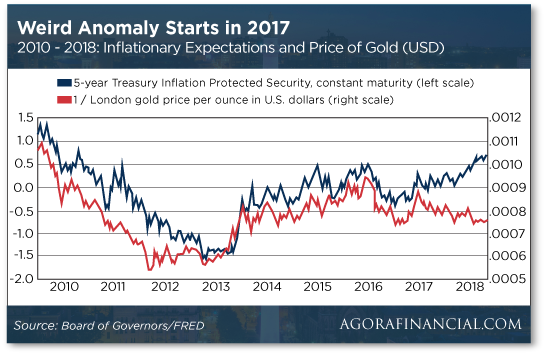 “The blue line shows the yield on 5-year Treasury Inflation-Protected Securities (TIPS) from 2010–-2018.” Short-term TIPS  — with 0 to 5-year maturities — have been closely related to actual CPI (Consumer Price Index) inflation.

“The red line shows the dollar price of gold over the same period,” Jim says.

Notice the “high degree of correlation until January 2017, when the correlation breaks down and the two lines diverge.”

“The blue TIPS line is a measure of inflationary expectations.

“As inflation increases, the dollar price of gold generally increases as well.”

In the same way, when inflation dips, the price of gold dips.

This trend continued from 2010 through 2017…when something strange happened.

“Beginning in early 2017,” Jim notes, “inflationary expectations began to rise steeply while the price of gold initially fell and then traded sideways with a downward bias.

“This downward trend in the price of gold even as inflationary expectations rose created a highly unusual divergence of inflation and gold prices in 2017 and 2018.”

According to Jim: “History shows that the continued divergence of these indicators is unlikely and that a convergence in the near future is a far more likely scenario.”

Jim predicts the direction of inflation and the price of gold will correlate again…and when it does, it’ll be “bullish for gold.”

This can happen in one of two ways.

“If that’s true, the dollar price of gold will soar in line with inflation and the convergence will occur with the red line rising to meet the blue line.

On the other hand, if strong growth — and inflation — doesn’t materialize because of Fed “overtightening,” the Fed will have to pause interest-rate hikes to avoid a recession. If that happens, Jim believes the Fed will push pause in September.

“In that case, gold will also rally because markets will conclude that the Fed cannot stay the course in tightening,” Jim says.

Jim concludes because the price of gold is trending sideways — and poised for a rally — now might be the time to buy.

He says: “When it comes to gold, you look for a good entry point.”

Third time’s a charm? VanEck files with the SEC — again — for a bitcoin ETF.

“On this third attempt,” CNBC reports, “the company is teaming up with blockchain company SolidX and basing the fund on actual bitcoins rather than futures.

“Each share of the VanEck SolidX Bitcoin Trust is set to cost a hefty $200,000, according to a filing with the Securities and Exchange Commission on Wednesday.”

The ETF is obviously targeted at institutional rather than Main Street investors.

“VanEck will help market the new bitcoin ETF, SolidX will sponsor or create the underlying index and Bank of New York Mellon will be the custodian, the [SEC] filing said.

“If all regulatory filings go through according to plan,” says CNBC, “the ETF should launch by sometime in the first quarter of 2019.” It would trade under XBTC on CBOE’s BZX Exchange.

If you buy this, we’ve got a bridge to sell you…

Dateline, Uzbekistan: “Businessmen in Karakalpakstan have started manufacturing a souvenir can with a label ‘Air from the Aral Sea,’’ says an article at EurAsia Daily.

“A company located in the village of Konlikul manufactures the product which is not common for Uzbekistan.” 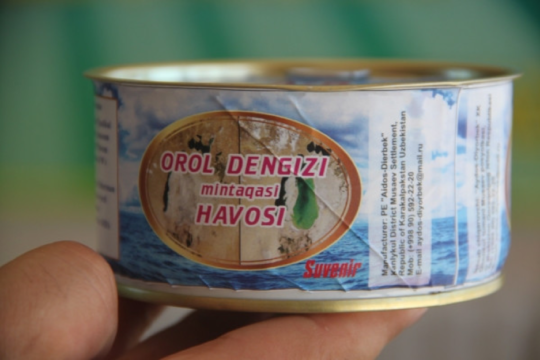 We have to ask: Is this common…anywhere? (More on that later.)

“The production was launched under a ruling of President Shavkat Mirziyoyev on measures to boost active development of domestic tourism.”

According to EurAsia Daily, canned air is a popular tourist souvenir peddled in many countries.  “Manufacturers put in cans not only air, but fog or smog as well.”

P.S. Last week, readers of Ray Blanco’s Penny Pot Profits locked in an easy triple digit gain — 174% in pure profits to be exact — on one of Ray’s pot-stock picks.

And there’s more huge gains to come…Ray’s unveiling some of his favorite picks TODAY that’ll be buoyed by Canada’s Cannabis Act vote. Don’t miss this.