“Brace for the World Economy’s Most Important Week of the Year,” Bloomberg News implores us.

Bloomberg is relying on a report to clients from Bank of America in making this assessment. Among the factors BofA says are in play…

“Each carries the potential to propel financial markets and shape the outlook for global growth after signs it slowed in the first quarter,” says Bloomberg. 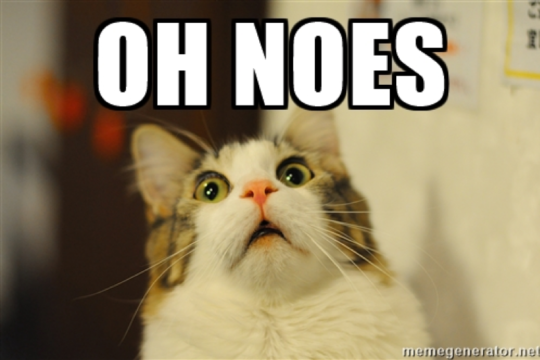 And that list doesn’t even take into account the “four booms at once” that are supposed to happen today.

Some background: Last Dec. 21, President Trump signed an executive order declaring a national emergency on account of “serious human rights abuses and corruption around the world.” (For context, the United States is currently under about 30 “national emergencies,” one of them dating back to the Carter administration.)

The executive order froze the assets of 13 people around the world — none of whom you’ve likely ever heard of — allegedly involved in said human rights abuse and corruption.

But there’s a strange corner of the interwebz where people have attached enormous importance to this executive order. To hear them tell it, dozens of prominent people have already been presented with documentary evidence of their involvement in a global ring of pedophiles. This is supposed to explain the recent wave of politicians deciding not to run for re-election and the abrupt retirements of CEOs.

The really big deal, however, is supposed to come today, according to the two people doing the most to fuel this frenzy — an alleged “military intelligence source” calling himself QAnon and an alleged NSA analyst calling himself “EyeTheSpy.” The latter of these characters promised on Twitter, “The revelations soon arriving on 6/11 will alter the course of the very world.” And in a separate tweet, “We’re going to *boom boom boom boom* and take their money Trust the Plan.”

Well, we have a few more hours to see what plays out. But to us, it all sounds like a secular version of the Shemitah three years ago — which turned out to be the proverbial nothingburger.

(We were unaware of this phenomenon until the untimely death of celebrity chef Anthony Bourdain on Friday. Yes, that’s supposed to figure into all this somehow.)

Back to the more conventional list of “market-moving events” assembled by Bank of America: We’ll be shocked if any of them proves to be of long-term significance to the markets.

The G-7 contretemps? We agree with our favorite political reporter Michael Tracey… 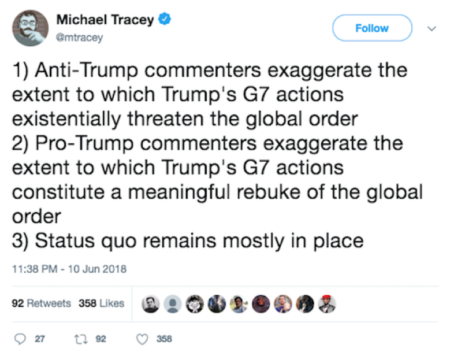 The outsized personality of Donald Trump is skewing mainstream perceptions of everything. Elsewhere, Mr. Tracey writes, “Mild discord over dairy tariffs would’ve been an unremarkable Business Section story two years ago. Today, it’s a sign of the apocalypse.”

And so it goes with the Trump-Kim meeting.

For weeks, the mainstream drumbeat has been “Trump is getting played.” Events are viewed through the cracked prism of Washington and Pyongyang.

Meanwhile, it’s as if the South Koreans don’t even exist. But in reality it’s South Korea’s President Moon Jae-In who’s been driving this bus the whole time. He was elected last year on a platform of rapprochement with the North… and he defied Washington’s commands to back off his overtures to the North.

“For the first time South Korea has a president that is ready, willing and able to push the peace process forward and prevent petty American politicians from diddling with the future of Korea for political gain,” writes Stuart Smallwood, a Korean-English translator who lived in South Korea for eight years. 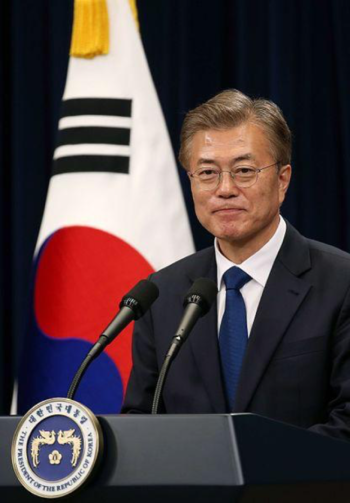 Polls indicate 88% of the South Korean public view the April summit between Moon and Kim Jong Un as a success (an event totally downplayed here in the U.S.), and Moon’s approval rating is 86%.

But what do the South Koreans know compared with the D.C. pundit class, right? They only live there, after all.

[Update: Moon has just booked a trip to Russia later this month to meet with President Vladimir Putin — the first time a South Korean leader has made a state visit to Russia in 19 years. Mr. Smallwood calls it “another step by Moon to work around the U.S. and find ways to create an insurance policy for whatever deal comes out of this process, or find an outright alternative if the U.S. walks away entirely.”]

In the end, we suspect this week will look much like last week — when there was no shortage of supposedly market-moving events that we can’t remember this week.

Here’s how our Zach Scheidt described last week’s state of play: “With trade wars looming and rhetoric flying between the leaders of U.S. allies… With N. Korea waffling on meetings with Trump (and how they may or may not de-nuclearize)… With interest rates rising, the national debt expanding and a summer season that is supposed to be weak for stocks… the market keeps rising!

Of course, all bets are off if Julian Assange is actually free and Seth Rich is actually alive — as the folks promising the “four booms” have suggested. Heh…

Hey, looky here — stocks aren’t crashing this morning despite the president “violating” all those “norms” at the G-7.

Indeed at last check the major U.S. indexes are all in the green, if only by a little. And gold just inched past $1,300.

No big economic numbers today. Tomorrow we get official inflation numbers just ahead of the Fed’s latest “policy statement” on Wednesday. How can we possibly contain our excitement?

Speaking of inflation, it’s picking up speed no matter how you measure it, says Agora Financial contributor Mike Burnick.

“The mainstream media and the Federal Reserve always talk about the consumer price index (CPI),” he tells us, “but there are other measures of inflation — like the New York Fed’s underlying inflation gauge (UIG) and ShadowStats’ Alternate CPI — that I think tell a much more accurate story. 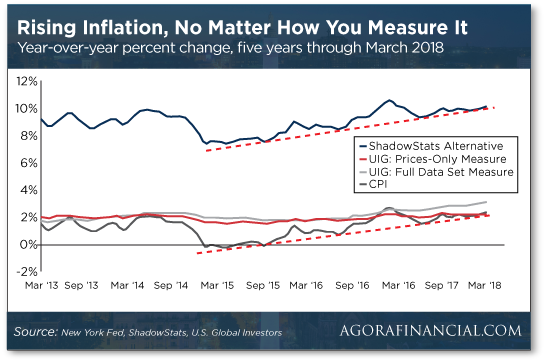 “The official government CPI numbers show that prices rose by 2.4% year over year through March. However, if we use the old Federal Reserve methodology (as ShadowStats does), the rate of inflation increases by 10% over the last year.

“Even if ShadowStats is overstating inflation, it is crystal clear to me that inflation is heating up.

“The Federal Reserve is so far behind the inflation curve,” Mike adds, “that inflationary pressures will continue to rise.”

In his entry-level advisory Infinite Income, Mike is overweighting the portfolio with hard-asset names — energy, minerals and precious metals. And every one of them throws off nice fat dividends, or, if you prefer, “Trump Bonus Checks.”

Crude prices are struggling to recover after a blow from Saudi Arabia on Friday.

The kingdom announced it was boosting production in advance of the next big OPEC meeting on June 22.

It’s not a huge amount, but after two years of production cutbacks, the move is significant. A barrel of West Texas Intermediate fetches $66.17.

Mere hours before that announcement, readers of Jim Rickards’ Project Prophesy were urged to take profits on three energy-related trades — good for gains of 17%… 26%… and 47%. And all of that with a hold time of less than six weeks.

Project Prophesy is currently closed to new subscribers. When it reopens, we’ll let you know.

So much for the Big Scary Crackdown on marijuana.

In January, Attorney General Jeff Sessions made a big deal of rescinding the “Cole memo” — the Obama-era policy spelling out the Justice Department’s mostly hands-off approach to states that legalize and regulate cannabis, despite it remaining illegal on the federal level.

The change stirred up fears of raids on dispensaries. We, on the other hand, said it was no big deal. Now there’s affirmation from The Wall Street Journal: “Many U.S. attorneys continued to use their limited manpower to target unusually brazen marijuana operations that are also illegal under state law, such as sprawling marijuana growers on federal lands or gangs that peddle pot along with other drugs.”

There’s still not one new federal case against a pot business that’s abiding by state law.

Meanwhile, as Emily noted here on Saturday, the president has hinted he supports a bipartisan bill in Congress that would give explicit permission to the states to pass their own pot laws without federal interference. “We’re looking at it, but I probably will end up supporting that, yes,” he said.

(Of course the states have always had that authority under the 10th Amendment, so the legislation is gilding the lily. Heck, the bill is called the STATES Act, for “Strengthening the 10th Amendment Through Entrusting States.” But after 80 years of “reefer madness,” some official acknowledgment of the federal government’s limited, delegated and enumerated powers can’t hurt.)

Meanwhile, the next big catalyst for penny pot stocks is just a month away. Will you be ready?

“Folks, please!” a reader implores after our take on Congress’ treatment of “pass-throughs” in the new tax law.

“You must be aware that a large percentage of small businesses in this country are Sub-S corporations. In case you forgot, these corporations pay no tax. Instead, if the owners want to leave profits in the company, this ‘income’ is added to their federal, state and local taxes.

“In the past, this meant that, for example, if we wanted to leave $100,000 in the business, this additional income would be tacked on to our tax bill and would put us (and probably any other small-business owner) in the highest tax bracket. Counting all taxes incurred, that amount would result in a total additional tax liability of almost $50,000. This figure is for the low-tax state we live in (IN), and could be much higher in NY, NJ, CT, etc.

“Maybe a lot of wealthy politicians benefit, but so do plenty of us ‘little guys,’ not exactly living in poverty but certainly not in the politico’s league. We are the backbone of ‘new jobs’ in this country and please don’t forget that.”

The 5: As we noted in our discussion Friday, the National Federation of Independent Business supported the final version of the bill. Presumably that means for the bulk of small businesses, it’s a net plus.

We’re just struck by how the legislation just happened to ease the tax burden on the real estate holdings of so many people who had a hand shepherding the bill through Congress, that’s all…

The most recent?: 43% gains on Micron Technology call options. Alan made the recommendation on Monday. For most readers, the sell order was filled on Friday. Not bad for a week, huh?

That’s why we say so often that Weekly Wealth Alert can be the single-most-powerful “upgrade” you make to your account with us. Learn more at this link.