The representative from Louisiana started in politics as a Democrat in 1972. By 1995, claiming there was no room in the U.S. House of Representatives for a conservative Democrat, Tauzin switched parties and eventually ended his career — as a Republican — in 2005.

He went on to become a successful and highly-compensated lobbyist for the pharmaceutical trade organization PhRMA.

Along the way, Tauzin was diagnosed with life-threatening cancer and suffered the dreadful side effects of treatment — like losing 65 pounds. He says he wishes medical marijuana had been available to him 15-years ago. 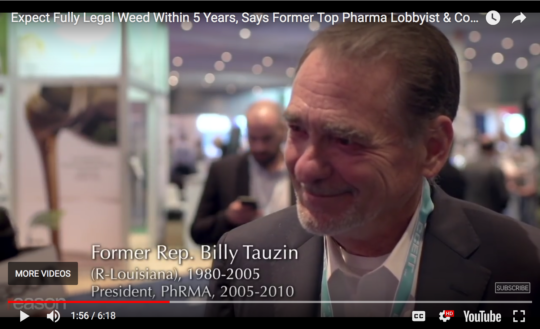 Tauzin is cancer-free today but hasn’t forgotten the needless pain he endured.

That’s one reason he joined LenitivLabs, a medical cannabis company founded by talk-show host and legalization advocate Montel Williams, himself diagnosed with MS in 1999.

Of course, Tauzin has other reasons for joining the fight for marijuana legalization…all of them green.

He says Big Pharma’s just waiting for marijuana legislation to pass — like the STATES Act we talked about yesterday — before entering the marijuana market…and having a M&A field day.

(That’ll mean big-time money for those who invested early in the marijuana market.)

Big Pharma might not have to wait long: Tauzin says if legal marijuana were put to a vote today in Congress — by secret ballot — it would pass.

Why would it pass? Because that’s what their constituents want — about 63% of Americans now support legalizing marijuana.

Then why secret ballot? Tauzin says Congress is still holding onto “Dark Age thinking” that pot is an “entry” drug that will lead American children into lives of addiction.

“Something that’s been kept from the American public because of bad policy.”

As for policy, when asked if the STATES Act will pass in Congress — and be signed by Trump as he said he would — Tauzin has this to say: “Trump keeping his word? You may not like him one bit but he keeps his word.”

Tauzin has “no doubt” that marijuana will be fully legal in 5 years — probably sooner.

Will that change the stigma associated with marijuana? And will people invest in the marijuana market even if it’s fully legal?

“The stigma of shorting housing I never thought about,” Danny Moses says. “The thought of going long cannabis, I have.”

“Moses, who was head trader at FrontPoint Partners under Steve Eisman, as documented in the book and film ‘The Big Short,’ says the plant’s still federally illegal status has left people like him hesitant to make pot investments public,” says Bloomberg.

(Did you catch that? Public…heh.) 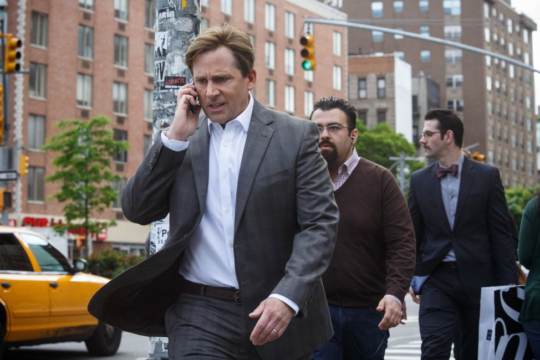 But that doesn’t mean he’s sitting on the sidelines before investing in the burgeoning industry; when it comes down to it, the profit potential’s too compelling.

“In general,” Moses says, “go where the money can be made.”

Speaking of, take a look at gains the marijuana market’s generated in one year: 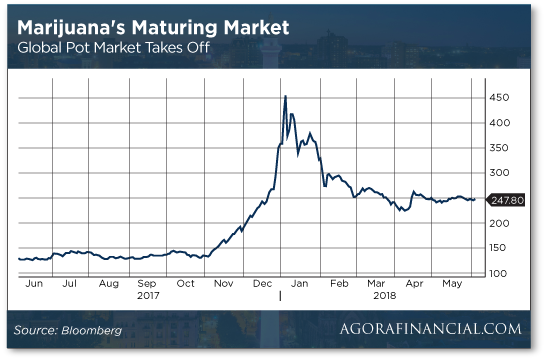 “The next round of millionaires will be the cannabis millionaires. They’re already being minted, in fact,” affirms Agora Financial contributor James Altucher.

Of course, we’ve been talking about the potential of pot stocks in The 5 for two years now. But James comes at the pot space from the perspective of someone who’s launched dozens of businesses. He knows hundreds of people who’ve launched dozens of their own businesses. And he’s run a $125 million venture capital firm. He knows ground-floor opportunities when he sees ‘em.

So if you haven’t taken note of the pot space yet… maybe now’s the time. Especially because James has hit upon a technique to pocket instant cash from the sector. Click here and see for yourself.

The major U.S. stock indexes are treading water as we write, awaiting new clues from the Federal Reserve.

By the time you read this, the Fed will have made its latest proclamation on interest rates. Another quarter-percentage-point increase in the fed funds rate is certain. But traders will be parsing the Fed’s statement — and chairman Jerome Powell’s press conference — for clues about the rest of the year. One more increase, or two? We’ll follow up tomorrow.

In the meantime, the Dow has barely budged from yesterday’s close. Among the big movers today — AT&T, down 4.6% after a federal judge cleared the way for a takeover of Time-Warner. (The Street is worried about the debt that T is taking on to seal the deal.) Now the buzz is that Comcast will make a play for the movie-studio assets of Twenty First Century Fox; FOX shares are up 8%.

One big economic number today — wholesale prices, up 0.5% in May. That’s more than expected, driven in large part by the new steel and aluminum tariffs.

While U.S. relations with North Korea warm up, the situation with Iran is in what Jim Rickards calls “a state of flux.”

As you’ll recall, last month Donald Trump withdrew the United States from the “Joint Comprehensive Plan of Action” signed in 2015 by the U.S., U.K., France, Germany, China, Russia and Iran. Under that deal, economic sanctions on Iran were eased in exchange for tighter monitoring of Iran’s nuclear-energy program.

The European powers, as we’ve mentioned several times in recent weeks, are trying to keep the deal alive without Washington’s participation. But as long as the dollar dominates the global payments system, Washington still calls many of the shots.

“The European Union is planning to switch payments to the euro for its oil purchases from Iran, eliminating US dollar transactions,” says an article Jim sends along from Russia’s state-run RT News.

“EU foreign policy chief Federica Mogherini said that the foreign ministers of the UK, France, Germany, and Iran had agreed to work out practical solutions in response to Washington’s move in the next few weeks,” the article continues.

The EU has a lot to lose if it stands with the US on Iranian policy. “Dozens of contracts signed between European businesses and the Islamic Republic could be at risk of cancellation,” says RT. “This would damage Iran’s economy and European firms would lose a huge market in the Middle East.

“Switching to alternative settlement currencies allows both sides to continue trading despite US sanctions.”

Is such an end-run really possible? “Dollar-based sanctions are a powerful financial weapon for the U.S.,” says Jim Rickards. “But our adversaries and so-called allies are not standing still. They are already envisioning a world where the dollar is not the major reserve and trade currency.”

It’s a slow-motion process. But U.S. withdrawal from the Iran deal might be speeding it up.

From the annals of European Union bureaucracy: A cow’s life — yes, we said cow — hangs in the balance after she went on holiday in a non-EU country.

“The cow,” named Penka, “from the Bulgarian village of Kopilovtsi has won fame and Europe-wide support since she wandered into neighboring Serbia for two weeks last month,” says ABC.

So what’s the EU’s beef with a cow looking for a little R&R — that’s rest and rumination — in greener pastures?

When Penka wandered back home to Bulgaria, “EU rules state that any animal entering the bloc from the outside must have proper veterinary approvals.

“Penka didn’t, so she faced a death sentence.”

Even Sir Paul McCartney got in on the action, petitioning officials to spare Penka’s life. (Perhaps he wrote a song? “Hey Penka/Don’t make it bad”…heh.)

“She’s done nothing wrong,” McCartney said on Twitter. (We imagine him saying that with his liverpudlian accent.)

You’ll be pleased to know Penka’s up and moo-ving…and although she’s completely healthy, she’s been quarantined for the time being — per EU rules.

The cow’s owner, Raina Georgieva, said, “I believed that there would be mercy for our Penka.”

One takeaway from this story: When your life’s at steak –er, stake — you want a Beatle on your side.

“It’s been interesting reading in The 5 how and what drove others to wait or take their Social Security early,” writes a reader who’s opting to take early benefits at 62. “It is a real maze to navigate through.

“I looked at the total we would draw in the age range 62-65 and calculated how long it would take to recoup those years of benefits.  It worked out to 10.25 years.  At 62 in 2018, that means we would be almost 73 before we would recoup the benefits paid now.

“Keeping in mind we are no longer working and have passive income from some rental properties and investments, we do need to make sure our adjusted gross does not exceed the limits set now for benefits to become taxable and we have adjusted our lifestyle to that effect.

“We have learned we can live on much less, have moved to a less expensive area, etc.  We have also decided to forego taking draws out of 401(k)s since they increase our total income, at least until we are no longer subject to taxes on SSI benefits. That is workable.

“More importantly, the amount we will draw until full retirement age (66.2), if invested well, can earn more than the amount we would have drawn if we live to age 85 or more.

“It is like buying a car, when most people look at the payment instead of the overall cost. Look at the totals, different scenarios (lifespan to 75 and 85 +), and not just the monthly benefit.

The 5: Your comments jibe with those of the fellow who filed at 62 whose note we ran yesterday.

We heard back from him, by the way. His situation sounds a lot like yours. “I’ve managed a ‘middle class’ living during most of my career by actively managing my budget –

that’s why I was able to walk away from my job at age 58 and will happily take my SSI at 62.

“The responses I see from those who choose to file later are that the SSI benefit will increase at a later age.

“In my circumstance, I will be able to handle my budget on the benefit I’ll receive at 62 plus a modest yearly payment from a family grain farm (corn/soybeans). By doing this, I’ll be giving my IRAs and other savings/investments another 10 years or so to grow so when/if SSI takes a cut, my investment balances will have grown and will belong to me.

“It’s not only Social Security payments that increase if you leave them alone for a few more years.”

P.S. Even though the mainstream hasn’t caught on yet, James Altucher reveals just how large the marijuana industry will be.

Here’s the best part — even if pot isn’t legal nationwide, this “pot paycheck” money is… Anybody has a right to collect it.

You can watch how this works right here.