Don’t Worry About a Trade War (Not Yet, Anyway)

“A surge of aggressive economic nationalism, as strong as any in the last half century, threatens to overwhelm the free-trade policies that have underwritten the postwar prosperity of industrialized nations,” the article begins.

It goes on to cite a flunky on Capitol Hill who calls the situation “the most dangerous since 1930” — the year the Smoot-Hawley tariffs were signed into law, accelerating the descent into the Great Depression.

Heh… The article in question is from June 27, 1982. Hats off to Reason writer Ira Stoll for spotting it.

And it’s at this moment we’re compelled to invoke Knuckman’s law: Don’t react to anything Donald Trump says for 48 hours. Give events that much time to shake out.

Let’s quickly rewind to Friday: Trump declared the United States would impose a 25% tariff on $50 billion of imports from China. That wasn’t a threat, it wasn’t a late-night tweet, it wasn’t chest-beating. It was actual news. The Dow lost all of 85 points on the day.

The Big Board shed another 100 points yesterday — the lingering effects, the mainstream said, from Friday’s decision. Fair enough.

After the close yesterday, the president asked his aides to identify a new list of $200 billion in Chinese goods to target for a 10% tariff.

Right now, it’s all threats and chest-beating. And yet the Dow is down 300. Overreaction much?

“Always wait to see how the market recovers from any snap moves after the headlines break,” says Alan.

By the summer of 1982, the market had spent 16 years basically going nowhere, the Dow range-bound between 600 and 1,000. And the reality was much worse because of how inflation during the ’70s had ravaged the value of most companies. 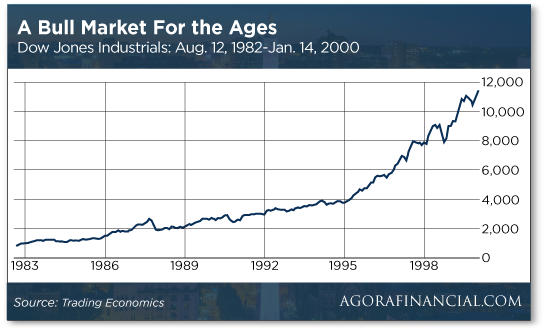 Don’t get us wrong: We’re not saying the Dow is on the verge of multiplying 15-fold over the next 18 years. 1982 was the start of a bull market. The current bull market is already nine years old, and the Dow has nearly quadrupled.

Could it still get better from here? Even though it’s been nearly five months since the Dow last notched a record close?

“Based on the stock market history of the past century, this raging bull market has a long way to run,” says Alan.

“In other words, this market is nowhere near its maximum potential. And with history as our guide, we’ve got at least three more years of a freight train rally.”

And the most profitable phase of a bull market tends to come toward the end. Look at that chart above. “History shows some of the biggest gains come when the bubble enters its final ‘melt-up’ phase.”

Whelp… Alan just used the b-word there. He’ll be the first to tell you the bubble will eventually burst, as they always do.

But here’s the thing: “When the market turns it won’t happen overnight. That’s just not how it works. It’s not going to be a straight down move. In fact, it’ll happen in a very recognizable way that you can see unfolding. It won’t just sneak up on us.”

For now, however, “I’m still a believer in buying any dips. I’ll continue to until I see conditions change in a meaningful way.”

Alan has pinpointed a three-step formula that identifies stocks poised to make sudden and dramatic moves up — vertical moves on a chart. The charter-subscriber discount comes off the table at midnight tonight… so if you’ve been thinking about joining up, now’s the time to click and act.]

The only asset classes rallying today are Treasuries and the dollar.

The dollar index just punched through the 95 level — territory last seen nearly a year ago. Meanwhile, rising Treasury prices are pushing yields down; the 10-year note is now the lowest all this month at 2.88%.

Speaking of crude, ministers from the OPEC countries hold their twice-a-year meeting Friday in Vienna… and this is one decision we won’t dare to handicap.

Will the cartel raise production levels or leave them where they are? “There are arguments for both sides,” says Zach Scheidt — who’s bullish on many income-producing energy names.

“Places like Venezuela would like to keep oil production stagnant, since low oil prices from the supply glut a few years ago led to economic turmoil in their country. On the other hand Saudi Arabia, with the largest market share, would benefit from the added revenues from pumping more oil.”

Thing is, OPEC’s decisions aren’t the be-all-end-all. “Keep in mind, these meetings only deal with one side of the oil market,” Zach points out — the production side.

Demand for oil continues to be very strong both in the U.S. and around the world. Higher demand for oil should help support prices even if production picks up.

In any market it’s important to look at the full picture instead of just paying attention to the supply side — or the demand side, for that matter.

Either this week or next, the Supreme Court is likely to deliver a blow to small business.

As we’ve mentioned a couple of times this year, the court is set to overturn its 1992 Quill decision — under which mail-order catalog businesses are required to charge sales tax only in places where they had a physical “nexus,” like a brick-and-mortar store or warehouse.

Quill helped Amazon become the behemoth it is as online retail took off in the quarter-century since. By now Amazon has so many warehouses and distribution centers that it charges sales tax in every state that imposes one.

A reversal of Quill would give Amazon a competitive advantage over smaller online businesses: There are 10,814 state and local sales tax jurisdictions across the country. Somebody working out of her home selling trinkets on Etsy doesn’t have the resources to figure out what to charge.

“Hardworking entrepreneurs on their own, or with a few employees, would have to navigate that maze of taxes,” writes former Ohio Secretary of State Ken Blackwell at The Stream. “Most will likely have to hire accountants or tax lawyers to help them figure it out — cutting into the bottom line for a small business. This will jeopardize profits and jobs.”

And it’s not as if states are starving for revenue right now. Consider South Dakota, which brought the case that’s before the court now. Writes former Rep. Chris Cox in The Wall Street Journal, “The state’s own data show that sales and use tax revenue grew from $787.7 million in 2013 to $974.7 in 2017 — considerably faster than the state’s rate of economic growth.”

And now what might be the most decisive evidence yet of a shift in sentiment on marijuana.

During its annual convention in San Antonio last week, the Republican Party of Texas backed the decriminalization of cannabis. The resolution passed with 80% approval.

“Texas is still living under very harsh penalties for even small amounts of marijuana,” says Heather Fazio of Texans for Responsible Marijuana Policy. “Delegates took a stand for a more sensible approach to these policies.”

No, it’s not the sort of thing that will give an instant lift to penny pot stocks; other factors are at work on that score. But it’s a milestone we didn’t want to ignore…

To the mailbag: “I am 78 and on Social Security and would advise people considering when to take it to forget the idea that it will be gone or reduced in the future.

“For that to happen the Congress would have to grow a pair but there is no chance of that.

“Right now remember the trust fund has no trust and no funds. We will continue to be paid from the Federal Treasury same as now. Since there is no plan to increase taxes the government will just expand the debt. After all, we cannot pay back the $21 trillion. Why can we pay back a bigger figure?”

The 5: Good point. The checks can be sent out in perpetuity, and the Federal Reserve can simply monetize the debt to cover it.

“When the time came to decide about taking Social Security, I waited until 70, to get the highest benefit, and my wife started early at age 62.

“Reason? When one of us dies, the remaining person can only claim one benefit — which will be my higher payment taken at age 70. By taking her benefits early, Social Security gave us a small monthly income for eight years before my larger benefits kicked in. No regrets.”

“I benefited by waiting, whereas my wife opted to take hers at 62. I was in a fortunate position where my employer asked me to continue working into my 70s full time or even a part-time arrangement, but after 44 years of nine–10-hour days and commuting I decided it was time to take advantage of my health and not let the stress start taking a toll on my life expectancy.

“Of course my best advice now is to follow The 5.”

The 5: Flattery will get you everywhere.

P.S. If you’ve ever thought about subscribing to one of our high-end services… but you just couldn’t pull the trigger because you didn’t think you had enough coin to play the recommendations… please pay attention.

Our newest trading service, Alan Knuckman’s Vertical Fortunes, might be our most accessible premium advisory yet.

“This strategy is available to all income groups,” says Alan. “No worries if some investors don’t have thousands of dollars available to buy a large lot of dividend-paying stocks in order to collect a 2–5% dividend.

“The majority of the vertical candidates I’m seeing today can be purchased in full for less than $500 — and the upside is massive!”

As with all our premium advisories, the risk-reward ratio is amped up compared with our entry-level newsletters. Don’t bet the mortgage money on these trades. Still, with this service, the amount of capital you have to invest shouldn’t be a barrier to entry.

And the charter-subscriber rate is still available through midnight tonight. Follow this link to claim your discount.