The contradiction is becoming glaring.

The Dow industrials remain mired about 7% below their all-time high set five months ago. The S&P 500 also faces an uphill climb to reach January’s records.

In contrast, the tech-heavy Nasdaq is in record territory this morning. Ditto the small-cap Russell 2000. Volatility? What volatility?

“In fact, this could be just the start of a parabolic move higher for stocks,” he goes on.

“Massive money flows are moving into the U.S.,” Mike goes on — “thanks to higher interest rates here than in any other part of the developed world, not to mention political turmoil overseas.

“It’s not such a stretch to think so,” Mike tells us. “After all, that would ‘only’ be about a double from here. And remember, late-stage bull markets often save the best for last.”

That’s true — witness the chart we shared yesterday of the Dow’s bull run from 1982–2000. You could have sat out the first 13 years of that 18-year bull market… and you’d have still made 2½ times your money in the final five years.

“History shows that previous bull markets posted their biggest gains in the final one to two years,” Mike says, “with the S&P 500 climbing an average of nearly 60% over the last 24 months of a bull market.”

Mike directs your attention to this special chart of the S&P 500 from Merrill Lynch. Check out the black line: That’s the S&P 500 going back to the dot-com peak in 2000. It encompasses a go-nowhere market through 2013 (only then did it decisively break above the old highs)… and the bull run since. 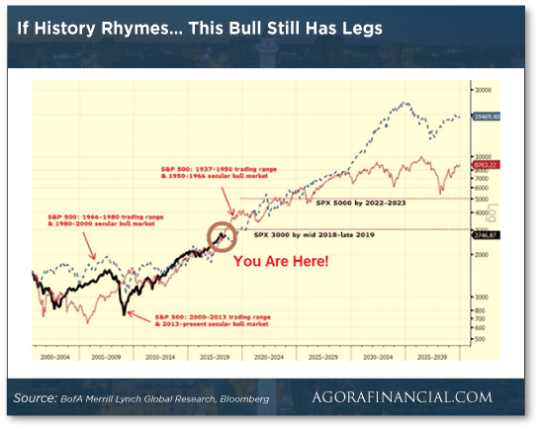 “That would require average gains of just about 15% a year,” says Mike, “which isn’t far-fetched at all, because it roughly matches the yearly performance of the S&P 500 since 2009. Heck, the S&P 500 has rallied more than 30% over the last 12 months alone.”

And consider this: “The stock market’s gains over the past nine years were achieved with the U.S. economy growing just 1.5% per year,” Mike points out.

“What happens if the economy suddenly accelerates from here? That scenario is already playing out today, driven by tax reform and inflation, which at least initially are big pluses for profits because they give businesses pricing power.

“Corporate earnings just soared 28% in the first quarter, the strongest profit growth rate in eight years. And earnings are on track to jump another 20% in the current quarter.”

So there’s Mike’s case for how now “could be just the start of a parabolic move higher for stocks.” If he’s right you’ll do just fine plunking your money into an S&P 500 index fund like SPY.

But if you want to amplify those gains, Mike has identified a way to do just that — adding as much as $383,515 to your retirement funds.

It starts with a quick three-minute phone call… as he explains when you click here. (There’s no long video to watch.)

As the day wears on, the aforementioned outperformance of the Nasdaq and the Russell continues.

Bonds and gold are selling off. Crude is recovering, a barrel of West Texas Intermediate back to $66 after the latest weekly inventory numbers from the Energy Department.

The big economic number of the day is existing home sales — falling 0.4% in May. Not much to say here — prices are high and supply is thin. At least the numbers on housing starts yesterday surprised to the upside — a 5% jump for the month, although the number of permits being issued is falling.

Hey, General Electric is close to being a “buy” now.

As you might have heard, the keepers of the Dow Jones industrial average have decided to give GE the boot as of next week, in favor of Walgreens. It was a swell run. GE was one of the original stocks Charles Dow included when he created the index in 1896. The last time GE wasn’t a part of the index was 1907.

Eight months ago when GE shares were down and out and looked like a bargain, our Greg Guenthner advised holding off: “Just wait for GE to get kicked out of the Dow. Then it’s time to buy.”

And now? “Getting booted from the Dow is bullish because it usually occurs at a negative sentiment extreme for the stock in question,” Greg says in an email. “The last bull has already turned off the lights.”

The classic case is when Alcoa was removed from the index in 2013. Shares more than doubled in just over a year.

Meanwhile, GE’s departure underscores how little industry is left in the Dow “industrials” — maybe 10 of the 30 stocks at most.

Reminds us yet again of Frank Sobotka, the union boss from Season Two of The Wire: “We used to make s*** in this country, build s***. Now we just put our hand in the next guy’s pocket.”

For the record: The final hurdle has been cleared for recreational cannabis to become legal across Canada.

The Senate passed the Cannabis Act yesterday — regulating how pot can be grown, distributed and sold.

Legal sales probably won’t be up and running till September… but our Ray Blanco says for maximum profit potential, you’ll want to move during the next 10 days.

It’s not official yet, but the company that publishes the Chicago Tribune and New York Daily News will likely revert to its previous name of Tribune Publishing… as soon as its spinoff of the Los Angeles Times and other California newspapers is complete. 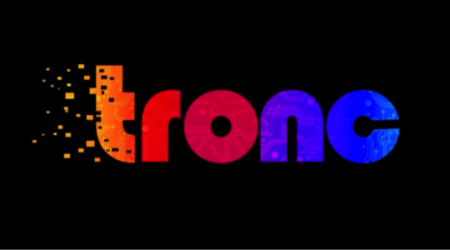 We were among the first to raise an eyebrow at the name change when it was first announced two years ago. Now everyone’s piling on: “Tronc Finally Realizes It Has a Stupid Name,” snarks the New York Post, which broke the story.

Ah, but the boo-birds forget the name change was part of a strategy to fend off a hostile takeover by rival publisher Gannett. What can we say, it worked. And TRNC shares (will the ticker revert to TPUB?) are up 1.5% on the day…

The 5’s been following the story of the S.S. Central America — a ship that sank during a hurricane off the Carolina coast in 1857 — carrying 30,000 pounds of gold.

“An expedition in 2014 to recover more from the wreckage revealed an array of world coins,” Coin World says, “including what experts record as the finest known Australian 1855 Sydney Mint gold sovereign, made during the first year of that mint’s operations.” 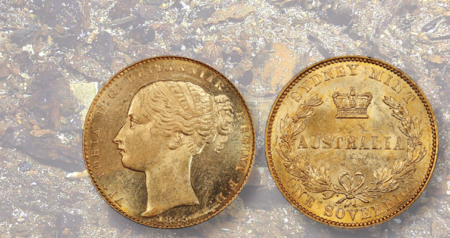 Dwight Manley, managing partner of the California Gold Marketing Group, says, “The 1855 Sydney Sovereign is the equivalent of the U.S. 1854-S Half Eagle; both ‘S’ mints, both first year of striking. It’s an amazing discovery.”

In addition to the Australian coins, a cache of world coins from Europe and Latin America was also recovered in 2014 by the salvage firm Odyssey Marine, longtime friends of The 5.

Since the S.S. Central America departed from San Francisco, how did those world coins end up on the ship?

“Back then, the Australian Sovereigns and the other recovered gold coins were not of any particular notice or importance, but today they are numismatic treasures!”

“I’m 65 now and I took early retirement to care for my invalid mother,” a reader weighs in on the when-to-take-Social Security discussion.

“Having been a longtime 5 reader and someone who pays attention to what’s going on in the world, I figured that since I put all that money into Social Security when I had a high-paying job, I should take it before Social Security goes insolvent in a few years.

“I have ‘doubled down,’ so to speak, by purchasing a number of high-quality junior gold and silver mining stocks located in relatively safe jurisdictions and am using that, since I am now too busy taking care of her to work, to fund myself rather than relying on something that won’t be there when I need it to be.

“Anyone roughly my age needs to have a reliable source of income separate from SS or you risk losing everything you’ve worked your entire life for.”

“Now you are saying that Saudi Arabia wants to pump more oil because they need the revenue,” a Reserve member writes…

“It looks like Friday we may find out which they want more, although clearly there are other factors weighing on their decision as well.

“Clearly, Trump wants lower oil prices so that gasoline prices come down before people head to the polls in November, among other influences, and U.S. influence probably still carries some weight in the kingdom.”

The 5: Ah, but what’s changed since the kingdom announced plans to take Aramco public?

The renewed Iran sanctions will take up to a million barrels a day of Iranian production off the market. Washington just put the screws to the Saudi royal family’s archenemy. The family is happy to return the favor by opening the spigots a bit more.

Trump must be sighing with relief. Last fall we warned that $75 was the danger zone for oil prices — a tripling of the price in roughly two years that could tip the U.S. economy into recession.

We came *this* close a month ago — $72 or thereabouts — before the first rumors were floated about a Saudi Arabian boost to production. Hmmm…

P.S. Mike Burnick has the secret for amplifying your retirement savings. With just one of his trade recommendations — for example — you could have walked away with a 19,400% gain!

Of course, a 19,400% return is the exception, not the rule… but Mike promises to show you how to boost your trades — for phenomenal returns.

Learn how to collect potentially life-changing gains on any ordinary stock… and it’s not complicated.

Yesterday’s market action was even more extraordinary than the mainstream is letting on, but gold cushions the blow. Read More

Our crypto expert Chris Campbell admits: “From NFTs to DeFi to metaverse, we’re in a bit of a rut.” Read More