A Looming Crisis (You Can Set Your Watch by It)

“Emerging-market debt crises are as predictable as spring rain,” Jim Rickards says. “They happen every 15–20 years, with a few variations and exceptions.

While EMs learned a valuable lesson from the 1997–98 crisis — namely, stockpiling huge reserves to weather the next global liquidity crisis — Jim says, “Memories are short.”

He believes Argentina’s the tipping point — with other vulnerable economies to follow — and highlights an article at Project Syndicate that details this emerging-market crisis.

“Argentinian President Mauricio Macri’s government has asked the International Monetary Fund for a loan that it hopes can stem a peso rout that has driven up interest rates” and “will slow the economy,” the article says.

“This reversal of fortune for the economy partly… reflects broader pressure created by the U.S. dollar’s recent appreciation — a process that is set to accelerate, because both monetary-policy and growth differentials are now favoring the United States.”

Most of 2017 saw surprising growth in markets outside the U.S. “As a result, the most widely followed measure of a trade-weighted dollar index depreciated by 10% last year,” the article notes.

Money flowed into Europe and other EMs from investors looking to benefit from “higher yields and the possibility of capital gains from currency moves.

“But in recent months, measures of economic ‘surprises’ have turned negative, as growth momentum has weakened in Europe and beyond…

“Now, there is less external capital chasing returns in Europe and the emerging economies, and some that was there has already flowed back home,” Project Syndicate says. “So economic and financial factors can be expected to continue to fuel the appreciation of the U.S. dollar.

“Some may view the U.S. dollar’s appreciation as consistent with a longer-term rebalancing of the global economy,” the article continues.

“But as Argentina’s situation demonstrates, excessively sharp and sudden appreciation of such a systemically important currency risks unbalancing things elsewhere.”

For Jim, the most accurate measure of the dollar against other global currencies is the Federal Reserve’s “trade-weighted dollar index.” It includes a large basket of currencies from both developed and developing countries.

“What matters most to trading partners and international debtors is not the level but the trend.” 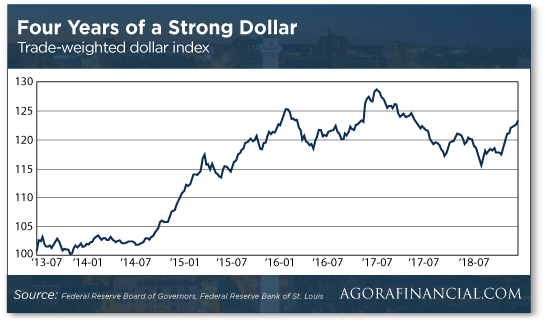 Yes, it pulled back last year, but it’s been rallying again since the end of January.

“The dollar is up 12.5% in the past four years on the Fed’s index,” Jim says, “and that’s bad news for emerging-market debtors who borrowed in dollars and now have to dig into dwindling foreign exchange reserves to pay back debts” — made more burdensome by the dollar’s strength.

“Those creditors begin to cash out investments in EMs across the board and a panic begins.

“Once that happens, even the stronger countries such as China lose reserves rapidly and end up in default.

“In a worst case, a full-scale global liquidity crisis commences, this time worse than 2008.”

Jim emphasizes the world’s economies haven’t fully recovered from the last recession and notes the Trump administration’s tendency toward protectionism. For those reasons, he expects the IMF — in order to bail out insolvent countries — to print trillions in Special Drawing Rights (SDRs).

“This new crisis could take a year to spread,” he says, “so it’s not too late for investors to take precautions, but the time to start is now.” To that end, Jim recommends diversifying portfolios by allocating more to cash and gold. (And if you don’t mind taking on a little more risk, you can also apply this trading strategy he developed during his work with the CIA.)

Note well: A crisis in emerging markets doesn’t necessarily mean the onset of a bear market for U.S. stocks.

The Asian crisis, starting in the summer of 1997, was a brief hiccup in an otherwise epic bull market.

Ditto the Russian crisis and collapse of Long Term Capital Management in ’98 (which was sort of a Part 2 of the Asian crisis).

Despite those outbreaks of volatility, the market’s rally continued through 2000. Even amid sell-offs and emerging-market mayhem, here were the returns from 1998–2000:

Tomorrow, we’ll explore how to take advantage of volatility, particularly in emerging markets.

To the markets, where today both blue chips and small caps are selling off.

At last check the Dow is down nearly two-thirds of a percent, about to break below 24,500 for the first time this month. Meanwhile, the Russell 2000 has shed half a percent from yesterday’s record close.

Despite the sell-off, market darlings Facebook and Netflix are both reaching higher into record territory as we write.

For the record: As anticipated here Tuesday, the Supreme Court has just cleared the way for states to start collecting sales tax from online retailers.

The decision reverses the 1992 Quill decision, under which catalog retailers were required to charge sales tax only in states where they had a physical presence like a store or warehouse.

Going forward, for example, an online retailer based in Massachusetts like the home-goods website Wayfair will have to charge sales tax to its South Dakota customers. (The case was South Dakota v. Wayfair Inc.)

The justices ruled 5-4, with most of the conservative bloc joining the majority — except for Chief Justice John Roberts.

But what better time, really, to let people know that roughly two-fifths of Russian men won’t live to see retirement!

According to The Independent, “Prime Minister Dmitry Medvedev announced on Thursday the Russian state pension age would be hiked from 60 to 65 for men by 2028 and 55 to 63 for women by 2034.”

The new policy — in effect next year — would set retirement age at just one year behind the World Health Organization’s life expectancy for a Russian man — age 66. (The CIA’s World Factbook has it at 65… yikes.)

Result? The Russian Confederation of Labour (KTR) estimates that “around 40% of men and 20% of women may not live long enough to claim their pensions under the new rules,” says The Independent.

“KTR does not support such decisions and declares its intention to launch a broad public campaign against their implementation,” said the group in a statement.

Anticipating public backlash, Russian President Putin quickly distanced himself from the decision, especially considering he’d promised not to raise the pension age in 2005.

“It is important that it was said 13 years ago, of course,” he says. He goes on to mention changing demographics… economic development… yada, yada, yada.

At the end of the day, Mr. Peskov says, per The Independent, that “Mr. Putin had not been part of the plan to increase the age at which Russians receive their pension.” So there.

Prime Minister Medvedev, on the other hand, says the pension-age policy is “unavoidable and long overdue” and will help boost the country’s living standards and economic development.

Heh… that’s one way to do it: Just sweep unused pension money back into government coffers.

“Technicians who arrived to fix a malfunctioning cash machine in the Indian state of Assam got a shock when they opened it up,” the BBC says. 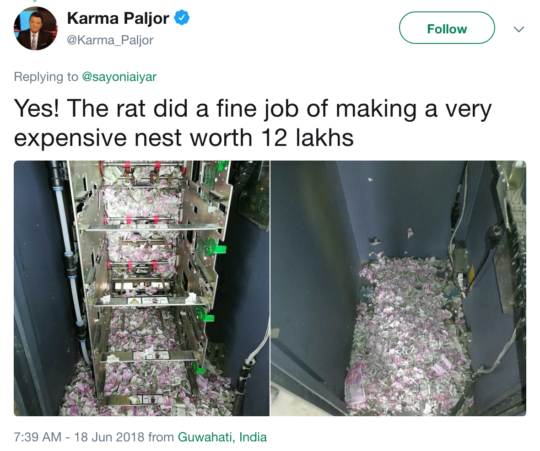 “Pictures of the chewed cash at the State Bank of India branch in Tinsukia district were widely shared on Twitter,” says BBC.

One picture on social media — gulp — shows a dead rat amidst the shredded detritus.

Police believe the rodent(s) squeezed through a hole for wiring in the ATM.

To the mailbag, where a reader contributes this to the Social Security discussion: “Years ago, I figured the sooner the better, but now I’m 62 and looking to 70 or longer…

“Why the change in perspective?

“Plus, there’s always the medical insurance, eye care, dental, etc., that I have through my company.

“Many of my retired friends tell me to work as long as possible. They miss the work routine and busyness of it. I’ve been at my current job 18 years and have gotten used to the demands and challenges a lot better than a few years ago.

“The only tug at retiring early is I want to see my kids and grandkids more. They live 500 miles away.”

The 5: The decision of when to take Social Security — and retire — is always about more than dollars and cents…

Along those same lines: “I am currently 67 and… plan on waiting to collect at 70 as the annual increase is 8%, which is a higher yield than most conservative investments.

“I’m currently employed and plan on it for at least five or more years, as I love what I do.

“The only two questions are…

1) How long can I count on SS benefits to be paid out in full?

“I’m currently healthy, but anything can change.

“I think my breakeven by waiting until 70 is roughly at age 82 versus collecting at 66.

“The other consideration is if I pass before my spouse, she would get a bigger amount in survivor benefits by me waiting.

“Also, my taxes should be lower after I retire with less income, thus lowering my taxes paid on SS payments versus collecting now.”
The 5: While a lot of experts really pound the table for that extra 8% a year if you hold off collecting SS till 70, we wonder if that’s going to get trimmed back in the next round of reform.

That said, raising the retirement age has the same effect…

As for how long the reader will live… no crystal ball here. But we can tell you it’s probably significantly longer than the average Russian.

Giving you the chance to get ahead of BIG market moves.
See details here. Remember, you won’t be able to see it past midnight.