“The outlook for [the] Indonesian economy in 2018 seems promising,” says an article at the Australia-Indonesia Centre.

Obscure as that assessment might seem, we’re going somewhere with it. Sit tight.

This diverse Southeast Asian country — with a population of 260 million — has “huge room for expansion.” 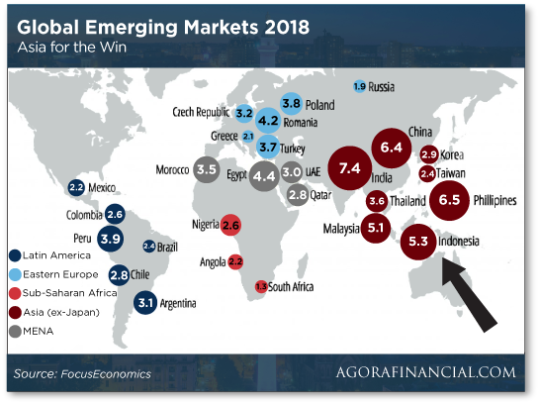 Indonesia’s economic growth has been buoyed by an infrastructure overhaul, which “is President Jokowi’s main priority,” says the Australia-Indonesia Centre.

“There are 245 national strategic infrastructure projects to be developed throughout the period of 2014–19, with an estimated total cost of 4,197 trillion rupiah (USD 308 billion).”

While the government’s working with private sector and state-owned enterprises to improve travel and transportation, one major infrastructure project addresses the country’s internet connectivity.

The Palapa Ring project “involves an undersea fiber-optic cable network that stretches across [8,078 miles] as well as an onshore network of nearly [13,670 miles],” says Indonesia Investments.

It “will provide fast broadband internet to Indonesians in both the urban and rural areas across the country.” And it’s the first instance of the government working with private telecoms to address infrastructure in the West, Central and East sections of the country. 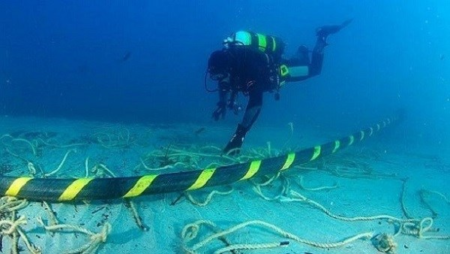 “Currently, the West section of the Palapa Ring is completed for 95.01% (and in fact it is already in use).

“This section is important because the western part of the country (specifically the islands of Java and Sumatra) is the most populous part of Indonesia and therefore can expect to see huge traffic,” says Indonesia Investments.

The Central section of the Palapa Ring project is about 72% complete and expected to be finished by the end of the year; the East lags behind at 33% complete.

What will nationwide internet connectivity mean for Indonesia — one of the fastest-growing e-commerce markets in world?

With the world’s fourth-largest population, Indonesia’s online boom took off in 2014 when local e-commerce site Tokopedia received $100 million in funding from investors Sequoia Capital and SoftBank.

Alongside Tokopedia, Indonesia has three other startups worth over $1 billion each — three of the four are e-commerce platforms — and there are more Indonesian unicorns than there are in all Southeast Asia combined.

According to the Australia-Indonesia Centre, the “huge Indonesian market” and “the growing middle-income population… will facilitate the growth of this [e-commerce] business this year.”

Indonesia’s not alone… The chart above indicates Asia has more emerging markets than anywhere else in the world.

If you’re an investor, “it’s likely that you’ve either heard or read about opportunities abroad like the Asian market,” says Tim Sykes.

He goes onto say, “While the Asian markets may seem novel and exotic to USA-based investors, it’s really nothing new.”

There are stock exchanges in 23 Asian-Pacific countries — we’re including Australia and three nearby countries — and some have been around for 100 years.

Asian markets didn’t really gain momentum until the mid-’90s after Japan’s economy started to rev up. At that point, Asian neighbors like Taiwan, China and South Korea took notice and started producing and exporting goods.

The Asian markets have since changed; they’ve morphed to more tech- or commodity-based markets.

The changing Asian markets have made it an “extremely exciting time to invest,” Tim says.

He explains why the Asian markets are so attractive to investors…

“One of the reasons why Asian markets are providing so much opportunity right now is because not so long ago, they were hitting all-time lows.”

“But signs point to the markets recovering in a big way, which means that for many, now is the time,” says Tim.

Asian markets are an “opportunity to diversify.”

“Investing globally is a great way to diversify your investments, and the Asian market is a hot place to put your funds.”

In return, Google will receive over 27 million newly issued JD.com Class A shares… and a stake in Asia’s booming e-commerce industry.

You don’t have to invest a half-billion dollars. The key’s to diversify.

Asian markets are a risk… with proportional reward.

“The Asian market isn’t without its fair share of risk,” Tim says. “However, risk is necessary for reward.”

In an article at Bloomberg, Koji Fukaya, CEO at FPG Securities Co., says: “Looking at the emerging markets, Asia is in a… better position due to its firm fundamentals.”

Keep in mind, in 10 years the Asian stock market is on its way to becoming the largest equity market in the world, overtaking North America’s by nearly doubling its market cap from $29 trillion today to $56 trillion.

“Intrigued by the Asian markets?” Tim asks. “How can you explore… opportunities?”

First, and we won’t sugarcoat this, these markets are “generally newer than the long-established markets in the USA or Europe, and the regulations are much more lax.

“This means that as a trader,” Tim says, “you really have to be able to dig in and do your research.”

Probably most important: Find “money managers who specialize in the Asian markets and who can help advise on funds, ETFs and other investment opportunities.

“Yes, you’ll pay more, but you’ll be investing in their expertise,” says Tim.

Last, consider American depositary receipts (ADRs), which represent shares in a foreign company. These shares are available through major banks, and most trade on the NYSE or Nasdaq. You can even use a regular brokerage account to buy and sell.

Tim’s takeaway? “Provided you put in the proper time and research and consider your options for investing overseas, it can be a great way to diversify your portfolio and expand your trading repertoire.

“Shake things up,” he says, “stay motivated and don’t be afraid to take the leap every now and again.”

“While the mega-cap Dow components endured another tough trading week,” Greg Guenthner says, “small-cap stocks continue to build on their May breakout to new all-time highs.

“Smaller stocks began separating themselves from the pack more than eight weeks ago as they pushed into positive territory for the year,” says Greg. 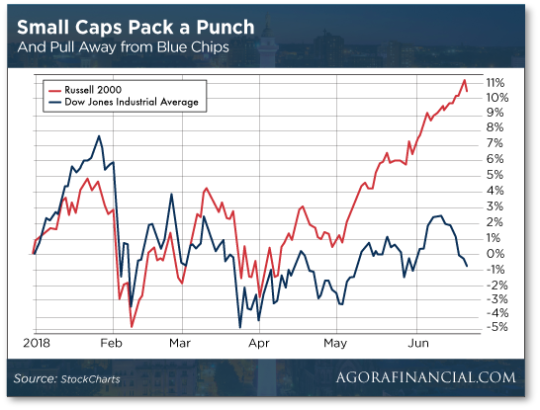 Greg blames the mainstream fixation on trade-war disputes for holding down blue chips… and you can’t leave the dollar’s strength out of the equation either.

“Meanwhile, the Dow Jones industrial average has fallen into negative territory on the year.”

Tit for tat: In retaliation for U.S. tariffs leveled against the EU, Mexico and Canada earlier this month, EU tariffs take effect on more than $3 billion worth of American goods.

“The EU put some 180 types of products on its tariffs list,” NPR says, “from agricultural products like orange and cranberry juice; to steel and aluminum items; to manufactured goods such as makeup, clothes and boats.”

The president of the EU Commission, Jean-Claude Juncker, had this to say Thursday: “The trade that we believe in is built on rules, trust and reliable partnership.

“The United States’ decision to impose tariffs on Europe goes against that. In fact, it goes against all logic and history.”

Per CNNMoney, “Suhail Mohammed Faraj Al Mazrouei, the current head of OPEC and energy minister of the United Arab Emirates, said the group would increase its output to the maximum allowed under the terms of a production agreement struck in 2016.”

The deal’s aimed at easing prices at the pump that’ve increased by roughly 20%.

“Banks have cleared the Federal Reserve’s latest test of their ability to withstand another economic doomsday,” says CNBC.

This is the fourth-straight year 38 participating banks passed the Fed’s “stress test.”

“Despite a tough scenario and other factors that affected this year’s test,” says Fed Vice Chairman Randal K. Quarles, “the capital levels of the firms after the hypothetical severe global recession are higher than the actual capital levels of large banks in the years leading up to the most recent recession.”

In other words: Banks have more cash on hand than they had before the Great Recession… heh.

Republican lawmakers — and big banks — are using this information to “bolster arguments… that regulations on the industry could be loosened without adverse effects.”

In contrast: “Banks that investors believe to be the most secure on Wall Street are also some of the most debt-leveraged,” says Agora Financial contributor Nomi Prins.

“In times of crisis, these companies could be the first to drop.”

Before becoming an author and journalist, Nomi worked for some of the biggest names on Wall Street (Goldman Sachs, Bear Stearns and Chase Manhattan Bank, to name a few).

Here she highlights an article at Bloomberg that pulls back the curtain on big banks pushing the envelope with risky loans.

“Goldman Sachs Group Inc. and Citigroup Inc. are among the banks that have doused companies with debt to an extent that would have been almost unthinkable a year ago,” the article says, “at least for a regulated bank.”

Leveraged-to-the-hilt Envision Healthcare Corp. — for example — could have a debt load 7.5 times its earnings. Before February, when regulators hinted they were loosening restrictions, banks wouldn’t think of lending to a company with a ratio above 6. (You give an inch… heh.)

“And it’s not just debt levels: Protections for investors in the more than $1 trillion leveraged loan market are weakening too,” Bloomberg says.

“Looser strictures and safeguards will likely lead to bigger losses for debt investors whenever credit markets start to cool.”

Remind you of anything?

Nomi says: “During the 2008 financial crisis, the biggest U.S. banks bought and stuffed the riskiest mortgages (subprime) into trillions of dollars of toxic assets.

“They then sold those financial products around the world.

“When the crisis hit,” she says, “stock investments and retirement portfolios were crushed.

“A similar pattern is repeating now.”

In the Golden City, a two-unit, Parisian-inspired home right next to Ghirardelli Square went on the market for $13 million in February. 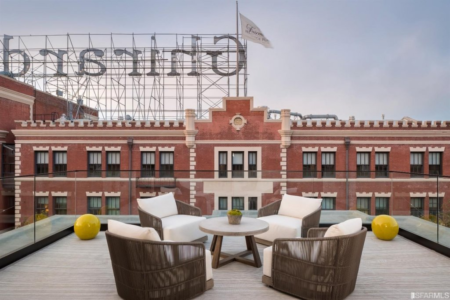 Mmm… You can smell the chocolate from here.
Source: Photography by Jacob Elliott

“In the past six months the price has dropped a grand total of $5 million,” SFGate reports.

“Buyers get quite a bit of luxury for that new bargain-basement price,” the article continues, “including a spa, movie theater, glass-enclosed wine room, 16-foot island and car washing station.” Car washing station?!

“There are also multiple outdoor spaces, some of which overlook Ghirardelli’s famed brick facade.”

The downside? “The tourist-friendly location was a bit of a turnoff to luxury buyers, who tend to value their privacy over proximity to frozen desserts.”

“The story about the rat in the ATM strengthens the case for precious metals,” says one reader.

“I’ve never heard of a rodent chewing up gold or silver coins, but this isn’t the first time I’ve heard of a rat reducing paper currency to its intrinsic value.”

The 5: We needed a good laugh to end the week. Thanks!