“Dumb money” trades in the morning while “smart money” trades late in the day — says an old Wall Street maxim. Fact is the opposite’s true.

Bespoke Investment Group compiled data that start in 1983 to prove “the first half hour of the trading day is anything but ‘amateur hour,’” according to an article at CNBC.

“In fact, it’s the best time to buy and sell. 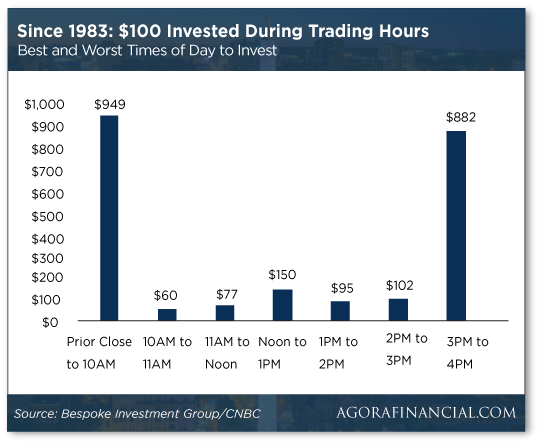 “Bespoke’s report shows that if an investor bought the S&P 500 at the previous day’s close and then sold it at 10 a.m., every single trading day since 1983, a $100 investment would be worth $949 today, making it the single best portion of the trading day.”

Looking at the chart, the next-best time to trade is late in the day, between 3 and 4 p.m.

Penny stock trading expert — and teacher — Tim Sykes is onto this market quirk that bucks conventional wisdom… and much more.

Take a look at this post from one of Tim’s students: 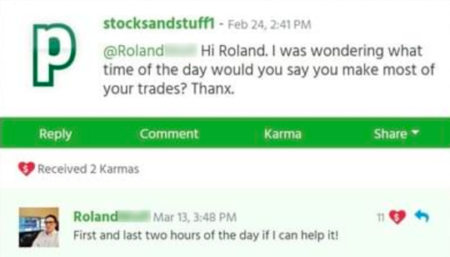 And here’s another little-known secret: Tim teaches students like Roland to buy Friday afternoon — live it up over the weekend — and sell for outstanding gains Monday morning.

Based on momentum in other shipping stocks — something he learned from Tim — Roland deduced this penny stock was going to spike… and look what it did: 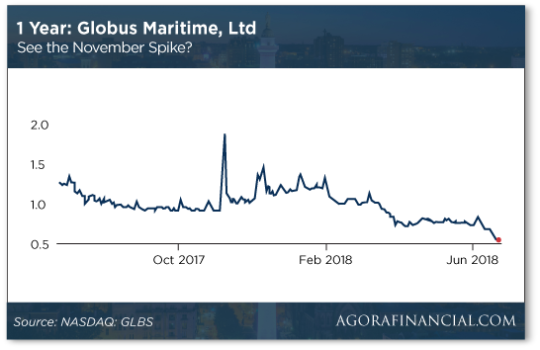 Roland bought his GLBS stock position at $1.10 per share and sold at the beginning of the week for $1.64.

Tim says: “My weekend strategy only works for small companies that have very little analyst coverage.”

While the media are saturated with talking heads scrutinizing every blue chip hiccup in the market, companies that normally trade below $5 — like Globus Maritime — are generally ignored.

“And because there’s not a whole lot of people following these companies,” says Tim, “when they release news, it can take a while for the news to spread and the market to react.

“That’s what creates an opportunity for you to open a trade on Friday, wait for the news to spread over the weekend and then cash out on Monday.”

And with his proprietary newswire analytics, Tim can capture favorable market sentiment… before anyone else catches on.

So — over the weekend — while other investors are champing at the bit to buy the next spiking microcap, you’ve already bought (low) on Friday and can sell (high) on Monday.

And imagine — with 52 weekends in a year, every Monday could be payday!

The big market story as the day develops is crude — a barrel of West Texas Intermediate back above $70 for the first time in a month.

Late this morning the State Department announced it expects all global crude buyers to cease imports of Iranian oil by Nov. 4 — a little more than four months from now. Little wonder crude is up more than $2 a barrel. And that’s on top of the $2.50 bump after the OPEC meeting last Friday.

Stocks are catching their breath after the latest trade-war tumble yesterday. At last check, the Dow is up a third of a percent at 24,333. The Nasdaq is up a half a percent.

In contrast to the recent market action, the Nasdaq took the biggest blows yesterday because it was technology at the center of the latest U.S.-China trade dispute. The FANG stocks got clobbered, Netflix down 6%.

Gold can’t catch a break — the Midas metal is down to $1,260, another low last seen six months ago.

One economic number of note: The Case-Shiller home price index inched up 0.2% in April — way less than expected. On top of other recent data, it’s clear home prices are still rising but the rate of growth is slowing appreciably.

“When it comes to a trade war,” Zach Scheidt says, “I’ve seen a market pattern that continues to show up over and over again.”

“It’s clear that investors are worried about these moves getting out of hand and hurting the global economy,” Zach says.

“But after each market pullback, a funny thing happens… The overall stock market finds its footing and then begins to move higher again.”

This has been particularly true of the Russell 2000 index, for example, made up of small-cap, mostly U.S. stocks. “And that’s a great signal showing us that our domestic economy — and our companies here in the United States — are doing just fine.

“Today, I want to discuss my two favorite income plays that are setting up for some particularly attractive gains thanks to the trade war fears in the market right now,” Zach says.

“My recommendation is to buy stocks that will benefit most from a [trade war] resolution.

“Think of automakers like Ford (F) and General Motors (GM), who have been beaten down recently by trade fears.”

Through a series of negotiations, “It looks like we have a chance at actually reducing the amount of trade restrictions in play and coming up with a fairer playing field…

“Both of these stocks pulled back earlier in the year thanks to concerns about a potential trade war,” says Zach.

“At the same time, both of these companies are generating reliable profits and paying lucrative dividend yields.”

Better yet, you can buy both stocks for an appealing price that doesn’t reflect the companies’ healthy earnings — yet.

Zach says: “A resolution to the trade war disputes could be just the catalyst to get the stock prices moving.”

The FDA has given its blessing to what the Financial Times calls “the first medicine derived from cannabis to be approved for sale in the U.S.”

“GW Pharmaceuticals [GWPH] has raised $1 billion from U.S. health care funds during the past five years to develop Epidiolex,” says the FT. In trials it’s proven to reduce seizures in children suffering from two types of epilepsy that up to now have been largely drug resistant.

With approval from the FDA yesterday, there’s only one more hurdle to clear: The DEA must reclassify Epidiolex from its status as a Schedule I drug. Under Schedule I rules, the DEA says cannabis has “no currently accepted medical use and a high potential for abuse.”

Rescheduling can take up to 90 days.

“What we’re offering,” says GW Pharmaceuticals’ CEO, Justin Gover, “is a bona fide prescription medicine which actually has been characterized in terms of its side effects, its efficacy, standardized manufacturing and so on.

“Everything that you know to be important and true for any medication that is available from a doctor will apply to this drug.”

Founded 20 years ago, GW — with headquarters in the U.S. and U.K. — was an early proponent of the medical benefits of cannabis.

“A key breakthrough for the company had been its decision to list on Nasdaq,” says FT, “This move has enabled it to tap into the more plentiful supply of risk capital available in the U.S.”

Some of Ray Blanco’s readers have seen him make the case for GWPH as long ago as May 2016 — when shares traded for $79. This morning it’s at $147.35 — actually down from recent highs amid worries about DEA rescheduling.

(Fun fact: Elizabeth II is queen of Canada; as such, she’ll need to sign off on the Cannabis Act. A mere formality, really, as the queen doesn’t like to get mired in politics. So unroyal.)

With Canada’s legalization, Ray expects the U.S. will be quick to follow.

“It’s hard to argue against a free source of tax revenue and jobs once a neighboring country can show that it won’t make civilization fall apart.” (Heh… good one, Ray.)

“At this stage in the game,” he continues, “many investors are still waiting to see results before they believe them.

“That means Canadian marijuana stocks are still likely to have lots of upside potential heading toward October.

“I’ll continue to alert you when I find tiny pot stocks that look like high-probability profit opportunities.

“In the meantime,” says Ray, “several of our existing portfolio positions remain under my published buy-up-to prices. There’s still time to pull the trigger on these trades if you haven’t already.” But not much time — Ray has his eye on four names set to move starting next week.

Who’s responsible for the housing crisis of 2008? “Not subprime mortgages, not Countrywide, not Angelo Mozilo,” says Mr. Mozilo. “I wish I had that kind of power.”

In a rare interview with The Wall Street Journal, the former CEO of subprime-mortgage giant Countrywide questions why he’s emblematic of Great Recession greed and a favored whipping boy of politicians and economists alike.

Despite being one of 2008’s archvillains, “Mr. Mozilo sees himself through the lens of his pre-crisis reputation,” says the WSJ, “when he was viewed as one of the most successful and innovative financial executives.”

After all, his company was a pioneer in lending to people who might not otherwise realize the American dream of homeownership.

For example, “Countrywide used nontraditional forms of credit, such as telephone bills or grocers’ bills, to make loans to farmers and minority borrowers.”

“It’s people who work in the fields,” says Mozilo, “people who don’t use credit for a variety of reasons. The rules… make it very difficult for these people to meet these requirements.”

During the housing crisis, however, easy homeownership turned into the nightmare of foreclosure.

“I loved what we did,” says Mozilo. “We changed the lives of millions and millions of people in a positive way, and I wanted people to know what Countrywide was about.”