Aaaand… the price of oil is back to its highest levels since late 2014.

This morning crude got its third big boost in four trading days. The Energy Department issued its weekly estimate of the nation’s crude stockpiles. It revealed a sharp drop of 9.9 million barrels — way more than the 2.6 million barrels the “expert consensus” of analysts was counting on. 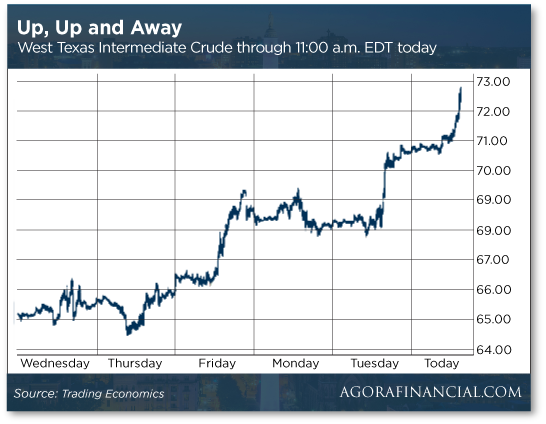 The first of the three big boosts came on Friday when the OPEC nations agreed to lift their production caps — but not by as much as traders were counting on.

And the second came yesterday, when the Trump administration issued marching orders to literally every other government and corporation in the world: Cease purchases of oil from Iran by Nov. 4.

“We’re asking them to go to zero,” is how an anonymous State Department official put it to the Reuters newswire.

As you might recall, in early May the president withdrew the United States from the 2015 Iran nuclear deal. And he re-imposed economic sanctions that had been in place before the deal came into force.

European leaders — who are also parties to the Iran nuclear deal — chafed big-time: “The international reach of U.S. sanctions makes the U.S. the economic policeman of the planet, and that is unacceptable,” said the French finance minister.

But yesterday’s demand from the State Department is a whole new level of, well, economic policing: During the period before 2015 when sanctions were still in effect, Iran exported some oil.

Iran’s two biggest oil customers are China and India. They too, are expected to toe the line.

“Asked if any waivers were expected to be granted in the process,” says Reuters, “the official said the position of the administration was that no exemptions would be permitted.”

As we mentioned several times last month, Washington can lord it over the rest of the world like this because the dollar is the globe’s reserve currency.

Undoubtedly China will try to end-run these sanctions: As Jim Rickards suggested here last month, Beijing might be willing to part with some of its gold stash to bypass the dollar and keep the oil flowing. Indeed, China might join forces with Russia, Iran and Turkey in “a new Axis of Gold designed to create a robust multilateral payments system that is free of hacking, tracking or interdiction by the U.S., and free of U.S. dollars.”

But what about India? That’s a way more interesting case.

For much of the 21st century, U.S. leaders have cultivated a closer relationship with India — not least because India is a longtime enemy of China’s and can serve as a “counterweight” to Chinese power in that part of the world.

The Trump administration has amped up this policy. No longer do Pentagon officials refer to the “Asia-Pacific” region. Now it’s the “Indo-Pacific.”

But Indian leaders are also looking to end-run the sanctions. “We are looking at reviving a rupee mechanism,” as one official told Reuters.

Under the previous sanctions, India and Iran cooked up a barter-like system. India paid for Iranian oil in Indian rupees, channeled through a small state bank. In turn, Iran used those funds to import Indian goods. Convoluted, but it got the job done.

Who knows, maybe India will set aside its differences with China long enough to join the Axis of Gold — and hasten the dollar’s decline as both the world’s reserve currency and an essential instrument of Washington’s power.

The on-again, off-again trade war jitters are off again.

A proposed U.S. crackdown on technology exports to China — and Chinese investments in U.S. tech firms — supposedly won’t be as severe as first thought. (Really, who can follow the day-to-day, hour-to-hour shifts in rhetoric anymore?)

At last check the Dow is up more than three-quarters of a percent — nearing 24,500. But the tech-heavy Nasdaq isn’t nearly as celebratory, up less than a quarter percent. Gold has sold off to another low last seen in December — $1,254.

As Greg Guenthner said here last week, GE getting booted from the Dow might ironically signal the worst is over. Since then, at least two other Agora Financial editors have recommended GE call options to their readers. Heh…

Meanwhile, we have a handful of dispatches from the front lines of the trade wars. Most of them fall under the law of unintended consequences, and we don’t mean Harley-Davidson.

Although as long as we brought it up, what a farce. Trump imposes tariffs on the European Union and the EU responds with tariffs of its own, including on Harley bikes. Harley responds by planning to move some of its operations overseas to avoid those tariffs, and Trump lashes out at… Harley. “They will be taxed like never before!” he threatens.

Last we checked, taxes can’t be imposed unilaterally by the executive branch; the people’s representatives in Congress get a say.

As it turns out, “Harley-Davidson Workers Back Trump Despite Jobs Shift,” says today’s Financial Times. Stockholm syndrome much?

For want of a nail: The only remaining major American producer of nails is on the verge of bankruptcy thanks to the steel tariffs that took effect on June 1.

Mid Continent Nail Corp. of Poplar Bluff, Missouri, has lost half its business in the last week, according to a story at MissouriNet. Of its 500-strong workforce, 60 temps have already been cut and another 200 workers could get the ax by the end of next month. The company could be history by Labor Day.

The firm gets its steel from its parent firm, which is located in Mexico. But even though it’s all the same company, the steel is subject to the 25% tariff.

Says company spokeswoman Elizabeth Heaton: “There are only about 15 of these [U.S. nail-producing] companies left and Mid Continent produces about 50% of the nails out of those 15. If you could imagine, if it were to go out of business… that would be a huge blow to that segment of the industry.”

Then there’s the case of the broken urinal that, if repaired, would run afoul of Washington’s trade edicts.

As you might recall, in April the Chinese mobile phone maker ZTE was banned from acquiring U.S.-made parts because the company supposedly evaded U.S. sanctions against Iran and North Korea. Without those U.S. parts, the company faced shutdown. Since then, ZTE has agreed to pay a $1 billion fine to stay in business and agreed to put U.S. compliance officers in its facilities.

But that agreement still hasn’t come into effect, and until it does the company still can’t get American-sourced parts. That includes spare parts for a broken urinal at ZTE’s offices in Shenzhen — manufactured by New Jersey-based American Standard. 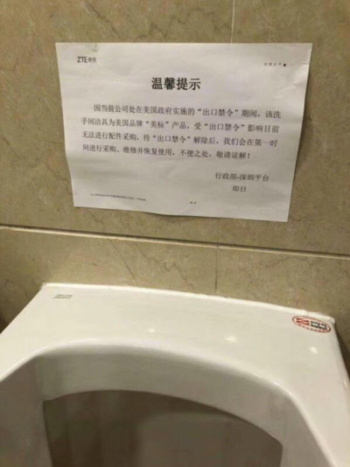 The disabled urinal as posted on Weibo, the Chinese Twitter

“We are not allowed to purchase U.S. components or accessories,” says an anonymous source to the South China Morning Post. The note you see above the urinal says as soon as the U.S. ban is lifted, parts will be ordered.

No doubt the employees hope that won’t be long…

For the record: Recovering financial pundit Dylan Ratigan will have to find some way other than politics to do good in the world.
Longtime readers will recall Ratigan went on an epic rant in 2011 when he had a show on MSNBC. We didn’t quite understand what he meant by “extraction,” but we were vaguely sympathetic… and we’ve periodically followed his adventures since leaving the cable news grind in 2012.

For reasons we can’t comprehend, Ratigan decided to return last year to his native North Country of upstate New York to run for Congress. He lost badly yesterday in a five-way Democratic primary.

Just as well. We figure he can make a more positive difference in the world far from the swamp of D.C.

Who knew the big banks are such snowflakes?

Tomorrow the Federal Reserve is due to deliver a second round of results from its 2018 “stress tests” on the largest banks — an annual charade designed to paper over the fact the too-big-to-fails have grown even bigger since the Panic of 2008.

Today’s Wall Street Journal reports that “the Federal Reserve is moving toward eliminating passing and failing grades for its stress tests” and instead adopting “a capital ratio that the lender must meet during the following year.”

The move reflects what the paper calls “the Fed’s uneasiness with surprising bankers and financial markets with bad news, such as Citigroup Inc.’s unexpected stress-test failure in 2014.”

Awww, the poor dears. Let’s just give everyone a participation trophy, huh?

It gets better: “The modifications also demonstrate how Fed officials have grown more comfortable with big banks’ risk-management chops… Last year, no banks failed, the first time that happened since the Fed began disclosing annual results in 2012.”

“Mozilo and his kind are predators of the worst kind,” a reader writes after yesterday’s 5 featured the unrepentant remarks of a key figure behind the Panic of 2008.

“They hide in their offices and collect ‘fees’ and commissions off of the transactions and then wonder why the people don’t agree when the ruse runs out.

“I would agree with him that the crisis started with Clinton, who had (D) Barney Frank, (R) Mitch McConnell and (a**hole) Larry Summers lead the charge to allow the investment bank to be linked financially with savings banks.

“This did unleash the same forces that the Federal Reserve unleashed and utilized during the Roaring ’20s for the run-up to the crash in October of ‘29.

“However, a slimy predator that knowingly harms others should be held accountable.

“The crash appears to have been callously created by the ability of the Fed to create ‘money’ out of nothing and giving it to their chosen recipients.

“Of course I’m sure Mozilo and his types would only say that it was nothing personal, just ‘business.’

“Probably fun if you are in on the scam, not so much when you are not.

“That speaks of character.”

The 5: You’re right about when the problem began. Bill Clinton connived with Republicans in Congress to repeal the Depression-era Glass-Steagall Act in 1999. The wall of separation between commercial banking and investment banking was demolished.

One of the “nay” votes in Congress came from the heroic Ron Paul. Dr. Paul is all for deregulation, but he was one of the few people who appreciated why it was a horrible idea in this instance: Repeal of Glass-Steagall cleared the way for the biggest banks to take irresponsible risks of colossal proportions, because they knew they’d get bailed out if they got in trouble.

Which is exactly what happened a few years later…

P.S. The circus continues: Now Trump economic adviser Larry Kudlow says the president is not “retreating” on Chinese technology. The Dow’s gains for the day? All gone as we get closer to virtual press time. More tomorrow…