Bad Omen From the Banks

Before we start the clock today: Reader response to Tim Sykes’ live conference call has been overwhelming. Nearly 74,000 people just like you have tuned in to Tim’s powerful new “weekend strategy” that can help protect your wealth against a market crash while amassing a solid nest egg. Tim explains why this strategy is more important than ever… You owe it to yourself to watch.

“Bank stocks just hit a record — a record of losses.”

“Coming into the year,” says an article at Bloomberg, “many cited the tax overhaul and a rising [interest] rate environment as reasons for banks to rally.”

In fact, the expected bank stock rally’s been a bust.

Mike says: “The reason why banks and other financial firms are falling behind is more fundamental… And it could spell trouble for the entire stock market…

“Over the past month alone, the SPDR Financial Sector ETF (XLF) has suffered the biggest cash outflows since 2015, with $2.5 billion getting sucked out of financial ETFs.”

“The crux of the problem,” says Mike, “is that the yield [curve] is NOT widening…”

What’s a yield curve, and why does it matter?

The yield curve shows the gap in payouts investors get for buying longer-term versus shorter-term Treasuries. In general, investors expect more in return for tying up money for longer periods of time. “So yield curves usually slope upward,” says Bloomberg.

When interest rates for 30-year Treasuries are the same as 5-year rates, the yield curve goes flat.

Take a look at the following chart comparing Dec. 30, 2016, with this past Monday: 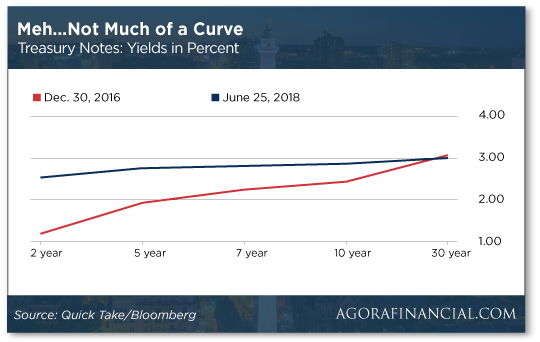 “The yield curve has historically reflected the market’s sense of the economy, particularly about inflation,” says Bloomberg.

Because inflation usually goes hand in hand with a strong economy, a yield curve that trends up and to the right means investor sentiment’s bullish.

When it pancakes — meaning investors are accepting the same yield on short- and long-term debt — that’s not a good sign. Even worse, “If the spread turns negative, the curve is considered ‘inverted.’”

An inverted yield curve is one sign of bearish things to come: “The spread between three-month bills and 10-year Treasuries has inverted before each of the past seven recessions,” Bloomberg notes.

“But the economy appears to be very healthy at the moment, so what gives?” Mike questions.

“Investors are nervous about escalating trade tensions with China, the European Union, Canada and Mexico. Basically ALL of our major trading partners.” (Emphasis added… heh.)

“Big-cap stocks in the Dow and S&P, with large amounts of revenue tied to overseas sales like technology and industrials, are getting crushed.

“And it’s a sure sign that belief in corporate profits and the economy itself could be peaking,” says Mike.

And if we are in the end stage of a boom cycle, Mike’s all about helping people protect — and amplify — their retirement savings. By as much as $383,515, in fact.

It starts with a quick three-minute phone call… as he explains when you click here. There’s no long video to watch, but please note for best results you must act today.

As Dave said here on Wednesday, this is the final year the Fed will issue passing and failing grades. The Fed wants to spare bankers and markets any “surprises” like Citi’s failing grade in 2014.

The only failing grade this time went to the U.S. division of Deutsche Bank — which is no surprise, it’s Deutsche’s third in four years. The practical consequence is nil: “The Fed will have to sign off on any dividend payments the U.S. arm would make to its parent,” says MarketWatch.

Meanwhile, Goldman Sachs and Morgan Stanley get an “incomplete” — meaning that dividends and share buybacks will be capped at current levels.

With everyone else getting a passing grade, the bank stocks are rallying today. But that’s short-term noise in the face of the flattening yield curve.

Elsewhere in the markets the big news today is about a plucky little shoe outfit called Nike (heh).

“Nike shares jumped more than 11% and reached an all-time high after the company reported quarterly earnings and revenue that beat expectations,” says CNBC.

And as Nike runs higher — OK, we’ll stop now — so does the market.

The Nasdaq — where tech stocks have taken a beating this week — is up to 7,546, 40-plus points over yesterday.

Took long enough, but the Fed has finally achieved its 2% inflation target.

The Commerce Department is out with its “core PCE” number, the Fed’s favorite measure of inflation. It was up a surprise 0.2% for the month and 2% year over year.

Ding, ding, ding: This hits the Fed’s target, meaning for the first time in six years, inflation is right where Powell and company want it, so (in theory) there’s less need to stimulate the economy. 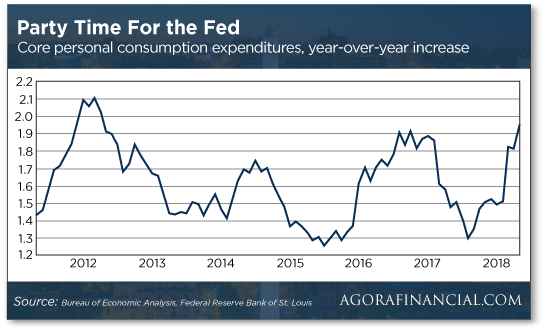 Consumer spending’s the other surprise in today’s report, rising only 0.2% for the month. This is way below expectations and contrary to the Fed’s opinion that consumer spending is “picking up.”

Personal incomes, meanwhile, are up 0.4%. In other words, Americans are socking away some of their income gains instead of spending it. Thus the savings rate jumped two-tenths of a percentage point, to 3.2%.

So much for the latest doomsday forecasts about the future of the euro and the European Union. Once again, our Jim Rickards is vindicated.

Grave headlines abounded this week in the run-up to an EU summit, with the continent’s migrant crisis at the top of the agenda. Only yesterday German Chancellor Angela Merkel was issuing dire warnings. A typical headline from The Guardian: “Future of EU Hinges on Solving Migration Issue, Says Merkel.”

Well, consider it solved: “Secure centers for migrants may be set up in EU states to process asylum claims under a deal reached after marathon talks at a summit in Brussels,” says the BBC. “The deal follows weeks of diplomatic wrangling over migrant rescue ships, and which country should take them in.”

With that in mind, let’s rewind a few weeks…

“The initial failure in Italy to form a government in late May triggered a new round of anxiety in markets about the ‘southern tier’ of the eurozone and the future of the euro,” Jim Rickards says.

“Italian stocks and government bonds were particularly hard hit, but the effects were not limited to Italy.” U.S. stocks also dipped after appearing to be on their way back up to late-January highs.

“Although a coalition [Italian] government was pieced together by June 1,” Jim says, “the gloom over the future of the euro has not lifted, despite some brief relief rallies.

“The euro is here to stay, and Italy’s place in the EU is secure,” says Jim.

“This is not to say there won’t be threats to leave the euro, fiscal tensions and maybe even an IMF rescue before all is said and done,” Jim continues.

It comes back to a central point Jim’s made here before: “The euro has never been an economic project in substance. It has always been a political project.

“The European Union, eurozone and the euro itself are all a response to 500 years of bloodshed from the Counter-Reformation, through the Thirty Years’ War, the Wars of Louis XIV, the Napoleonic Wars, the First and Second World Wars and the Holocaust.”

Jim says the fall in the euro this year will prove a momentary blip — a small version of the 2010–2015 European sovereign debt crisis.

He urges: “Investors who stay focused on the final result… will make huge profits if they time their entry points and look for lows in Italian stocks, bonds and the euro.”

“Although typical wisdom says OPEC’s recent production increase is bearish for oil prices,” says Zach Scheidt, “reality points to a completely different situation once all factors are taken into account.”

“I say ‘on paper’ because the 1 million-barrel-per-day hike really only amounts to about 600,000 barrels per day,” Zach reasons.

Not so, says Zach. “This production hike is well under the 1.5 million barrel increase that many oil analysts were forecasting.

“When investors predicted a 1.5 million daily boost and got 600,000, the price of oil rightfully rose on Friday to compensate for the lower-than-expected supply.”

And that’s not all: “There is another lesser-known factor taking place in Canada right now that should keep oil prices higher in the near term.”

Also last Friday: “A spokesman for Syncrude Canada’s oil sands facility near Fort McMurray, Alberta, announced that production is offline at least through July after a power outage this week.”

That means the global oil supply is reduced by 300,000 barrels per day until the facility is up and running.

“So to recap the weekend,” says Zach, oil production “emerged with a net hike somewhere around only 300,000 once the Syncrude cuts are factored in.”

With OPEC’s hikes falling below expectations and production offline at Syncrude, there are huge implications for one sector of the oil biz.

We’re talking about refineries. “They buy oil in bulk and have it piped in” to their facilities, where it’s turned into “products like diesel, gasoline, jet fuel and even asphalt,” Zach says.

Because the supply of oil’s more limited than expected, refiners will have to pay more.

The weird thing is prices at the pump aren’t reflecting the latest increase in oil prices. Well, not yet anyway. “So that means refiners won’t receive as much revenue for selling the fuels that they refine,” says Zach.

But don’t weep for the refiners. “We’re still in peak driving season here in the U.S.,” says Zach. “And that means demand for gasoline, diesel and jet fuel will continue to increase.

“And keep in mind,” he says, “with jobs plentiful and money in the pockets of U.S. consumers, we’re likely to see more travel this year across the country.”

Overall, Zach says refiner stocks are very lucrative… and this temporary disconnect between the price of oil and declining refinery profits is just that — temporary.

“This is clearly a… pullback based on investor confusion,” Zach says. “And it’s a perfect opportunity for us to collect big income payments… [from] some of my favorite refiner stocks.”

“A Japanese company has launched a line of business suits specifically for blue-collar workers,” says the BBC. 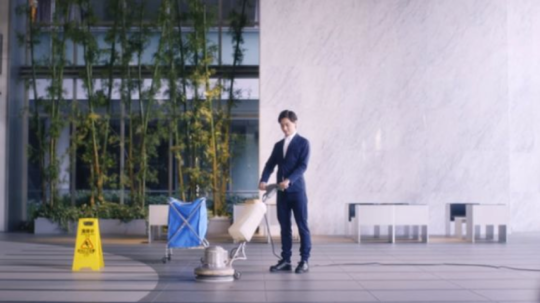 “The Oasys Style Wear company in Tokyo is launching a line of ‘lightweight, quick-to-dry’ business suits in July for men and women.”

The next-generation clothing line follows on the heels of a line of suits released in March, favored by “rubbish collectors, agriculture workers and construction personnel.”

Which begs the question: If white- and blue-collar workers all dress alike, how will we be able to tell the Village People apart? Heh…

Imagine spending your weekend relaxing and doing the things you love, all while making money.
74,000 people — and counting — have already watched Tim’s strategy for buying on Friday and selling on Monday… like collecting an extra paycheck every weekend!

But you have to act fast… Check it out here now.

In developing a strategy for dealing with Beijing, Joe Biden says he’s in no rush to drop the Trump tariffs on China. Read More