For all the reasons out there to worry about the stock market these days — Drudge linked to an Associated Press story this morning headlined “Warning Signs Rise for Stock Market’s Record-Setting Run” — there’s one signal that’s undeniably positive.

“A staggering amount of stock buybacks from Corporate America is showering the market,” says our Mike Burnick.

“Stock buybacks,” Mike reminds us, “are when a company repurchases the shares of stock they previously issued. Buybacks occur at the market value per share and the buying company then re-absorbs that portion of ownership previously held among public and private investors.”

As we’ve explained in the past, if you own shares of a company that does a buyback… those shares become more valuable because you literally own a bigger piece of the company.

During the second quarter of this year, U.S. companies announced a record $436.6 billion worth of buybacks… with Apple leading the way.

TrimTabs reported that American companies announced a record $436.6 billion worth of buybacks in the second quarter of this year alone, led by Apple’s $100 billion repurchase… 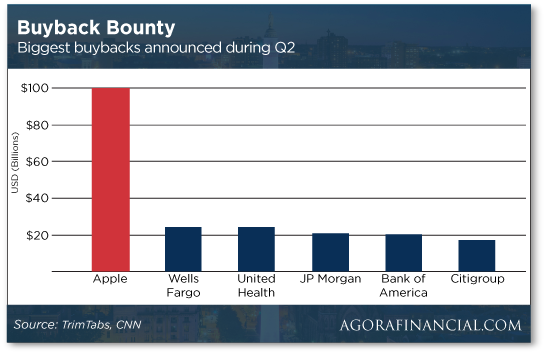 That’s a quarterly record — smashing the previous record of $242.1 billion set during the first quarter of 2018, according to CNN.

“The fuel for the buyback frenzy is Trump’s tax cuts,” says Mike, “which chopped the top corporate tax rate from 35% to 21% and are fueling rapidly rising profits:

“Tax cuts are the gift that will keep on giving to American shareholders, and it’s the same for rising corporate profits and the stock buyback boom.”

Even Warren Buffett — usually a skeptic about buybacks — is jumping on the bandwagon.

Two days ago, Reuters reported Berkshire Hathaway has done away with years-old limits on its own buyback rules.

“The last time Buffett approved a move like this was in December 2012,” Mike tells us. “Shortly after, the company went on a $1.3 billion spending spree.

“If Buffett is in on this action, you can bet many other big-name companies with billions in tax savings will do the same.

“The market’s had its fair share of chop this year and I don’t expect that to change right away. But I do expect stock prices to be much higher one year from now than they are today. Trump’s tax cuts and the resulting flurry of stock buybacks will be a major reason why.”

[Ed. note: You can act on Mike’s outlook by buying an S&P 500 index fund like SPY. But Mike has zeroed in on a way to amplify the gains he sees coming.

Using his strategy, you could add as much as $383,515 to your retirement account. It starts with a three-minute phone call to an unusual toll-free number — as he explains when you follow this link.

Do it now — because for reasons he lays out here, the biggest gains are to be had if you place that call before midnight tonight.]

Aside from tax cuts, there’s another factor fueling buybacks… and this one might not be so positive looking ahead another year or two.

Our recovering investment banker Nomi Prins flags a Reuters story that begins thus: “The escalating trade war between the United States and China may prompt U.S. companies to shift money they had earmarked for capital expenditures into stock buybacks instead, pushing record levels of corporate share repurchases even higher.”

It only makes sense, Nomi says: “In a world of uncertainty, cash is king. That’s why amidst escalating trade wars, executing buybacks have short-term appeal to the companies that have the cash to engage in them.”

Long term, it’s bad news. As we explained earlier this year, “capex,” along with research and development, is how companies invest in their future growth. Buybacks amount to “living for today.”

But in the near term, Nomi says buybacks will only power the market higher. “Not only will these companies buy their own shares,” she adds, “but they will also use that cash to shop for other companies. That should keep the pipeline of mergers and acquisitions growing.”

After several days of gains, the major U.S. stock indexes are retrenching a bit today.

As we write, the Dow is off about a third of a percent at 25,125. The S&P 500 is down a quarter percent, still holding the line on 2,800. But the small-cap Russell 2000 is in the green, perhaps poised to make another run at its record close last month.

Among the big movers — IBM, up 3.4% as we write after delivering a nice earnings “beat.” It was only a few days ago in this space that our science-and-wealth maven Ray Blanco praised Big Blue’s move into artificial intelligence. It’s a move clearly starting to pay off. [Ray still has a blockbuster announcement due tomorrow. Watch your inbox after the market close at 4:00 p.m. EDT.]

The day’s big economic number is the “Philly Fed” survey of business conditions in the mid-Atlantic. At 25.7, the number is very good — too good. That’s because the big driver of the number is a steep rise in the prices businesses pay for raw materials and other “inputs.” We haven’t seen an increase like this since July 2008. Back then, it was all about high oil prices. This time, it’s all about tariffs.

Two days of congressional testimony by Federal Reserve Chairman Jerome Powell have given a big lift to the dollar… and a big blow to gold.

That’s even though Powell said nothing new or dramatic yesterday or the day before. He all but confirmed our Jim Rickards’ outlook for Fed policy — steady increases in the fed funds rate of a quarter percentage point as far as the eye can see. The only thing that would change the outlook is a severe hiccup in the stock market, a sudden downturn in the job market or a steep tumble in the inflation rate. None of those are on the horizon.

But rising rates aren’t the only way the Fed is “tightening” monetary policy.

As we’ve mentioned from time to time, the Fed is also shrinking its bloated balance sheet — puffed up with purchases of Treasuries and mortgage-backed securities in response to the Panic of 2008.

“My estimate,” says Jim, “and that of others, is that this balance sheet reduction policy is equivalent to four 0.25% rate hikes per year on top of the four already planned. The combined effect is the same as the Fed raising rates two percentage points per year off a near-zero rate base as recently as December 2015.

“Bearing in mind that monetary policy works with a 12–18-month lag, this extraordinary tightening policy… is almost certainly a recipe for a recession.”

Yup. Since World War II, every Fed tightening cycle but one has ended in a recession. (The lone exception was 1994, and that was close.)

Whenever the Fed realizes it will have to reverse course, expect the dollar to tumble and gold to soar.

[Just in: Donald Trump just told CNBC he’s “not thrilled” with Fed policy right now. “Because we go up and every time you go up they want to raise rates again. I don’t really — I am not happy about it.”

The unspoken subtext? He knows the Fed could easily tip the economy into recession during the 2020 campaign. Gee, what were we saying about that only two weeks ago? Oh, yeah…]

For the record: Even the White House is fessing up that Uncle Sam will return to $1 trillion budget deficits starting next year.

The administration quietly issued revised budget estimates last week in an annual report to Congress and acknowledged the inevitable: The $300 billion GOP spending spree combined with rising interest on the national debt — those rising interest rates, dontcha know — will drive up the deficit.

Bush 43’s last budget and Obama’s first three budgets racked up $1 trillion deficits between fiscal years 2009–2012. Washington justified those numbers as necessary to recover from the Panic of 2008. (We begged to differ, but no one asked us.)

But there’s no recession now. We cringe to think what the deficit will be when the next recession comes around…

“Trumpets for Hillary?” writes one of our longtimers after a fellow reader called us out for “dislike of Trump.”

“Hmm. To my undoubtedly imperfect memory, The 5’s last comment of substance regarding Mrs. Clinton involved Libya and how her historical ‘war hawk’ attitude was now creating unfortunate difficulties in that country, including efforts to export oil.

“Prior to that, similar negativity about her actions and attitudes regarding Ukraine.

“And now, by gosh, The 5 is being criticized for its, ahem, biased ‘pro-Hillary’ language.

“Incorrect political language? I thought ‘political correctness’ was the particular provenance of those darn li-ber-als and such-like creatures of the ‘left wing.’

“So ditch that, stick to the Presbyterian Standard that’s already in place and keep on zinging everyone as The 5 sees fit.”

“It is taking me a shorter amount of time to read The 5 these days,” says a reader returning to the familiar ground of whether it really takes 5 Mins. to read these daily missives.

“Am I learning to read faster? No, I’m learning to scroll faster through your infomercials (disguised as content). Yesterday you gave us a greater amount of time for these ads (2:40) than your actual news and comments (2:20). PLUS, there was a P.S. ad and the usual three clickbait ads. OK, I have always skipped these.

“On top of all this, you have increasingly blasted out advertising messages throughout the day using The 5 as cover. It’s wearing out my delete key.

“So you say The 5 is free and you need to advertise your services to stay afloat. And people click on these ads and purchase your products. I get that. But if you don’t return to some reasonable balance of ads and content, you won’t have me to hammer on much longer.”

The 5: We appreciate your input… but we respectfully question the math behind it.

Near as we can tell, you’re counting all of Zach Scheidt’s musings about how private equity players will continue driving up stock prices. But we had only a brief pitch for Lifetime Income Report at the end of that.

It appears you’re also counting Ray Blanco’s update on the state of the market for penny pot stocks. But that too was strictly informational; we merely included a short reminder about a blockbuster research effort of Ray’s that drops tomorrow.

As we’ve long said, our ultimate measure of success around here isn’t clicks or sales. We succeed if at the end of each episode of The 5 you (1) learn at least one interesting thing you didn’t know before and (2) you decide to come back the next day.

Still… this is one instance in which perception equals reality, and we won’t question your perception of being “hammered on.” We’ll keep it in mind as we move forward…

P.S. As for the strictly sales-driven emails we send out, we’re dialing back on those. For a while this year, they were almost a daily thing. Of late we’ve pulled back to our previous standard of four days a week. Diminishing returns and all that.

We’ve said it before, but it bears saying again: It does us no good to have customers. It’s happy customers we want.