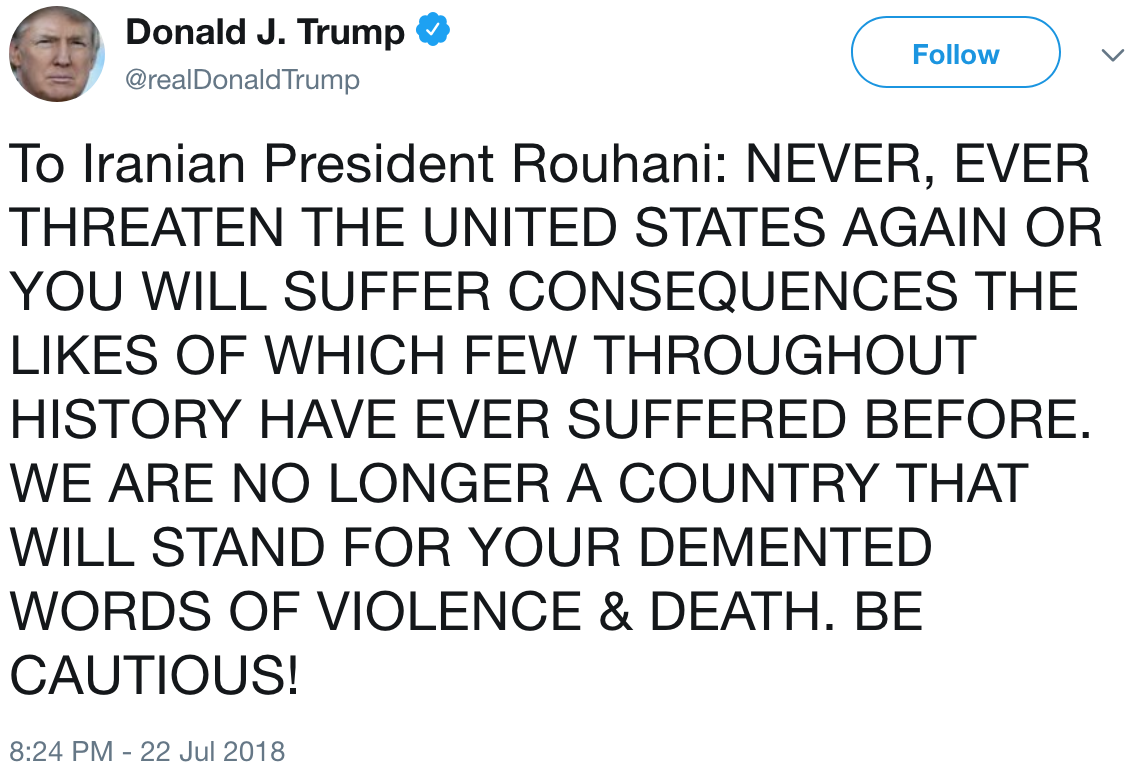 In the first place, we’re still trying to figure out what the “threat” was.

Near as we can tell, this all started on Saturday when Reuters reported, “The Trump administration has launched an offensive of speeches and online communications meant to foment unrest and help pressure Iran to end its nuclear program and its support of militant groups, U.S. officials familiar with the matter said.” 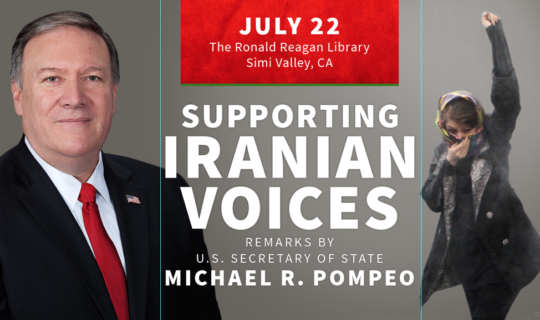 … in which he called on overseas Iranians to support protesters inside Iran.

Iran has both a population and a landmass more than three times that of Iraq — with far more mountainous terrain.

According to a December 2017 report from the Rand Corp., a major conflict with Iran would tie up 21 of the Air Force’s 55 fighter squadrons and four of the Navy’s 11 aircraft carriers.

Yes, they could easily destroy Iran’s nuclear and military capabilities. “But the worry for senior military war planners is that the end of the U.S. campaign would not mark the end of the war, but its beginning,” writes Mark Perry — perhaps Washington’s best national security reporter — in Foreign Policy.

As the University of Kentucky’s Robert Farley explained it to Perry, “There is very little reason to suppose that anything other than an Iraq-style war would lead to regime change in Iran. Even in a very extensive campaign, and absent the use of ground troops in a major invasion, the Iranian regime would survive.”

If that’s the plan, the administration hasn’t made much effort yet to persuade everyday Americans that the deaths of U.S. troops in such an effort will be worth the sacrifice.

But what if Trump’s talk of CONSEQUENCES is all just bluster? What if the real objective is to strangle Iran economically?

The problem there is one we identified only days after Donald Trump pulled Washington out of the Iran nuclear deal. There are five other governments besides the U.S. and Iran that are parties to that deal — Britain, France, Germany, Russia and China. None of them is eager to play along with stepped-up sanctions.

The Europeans have little choice but to cooperate reluctantly, considering how much they rely on the dollar to grease the flow of commerce. “The international reach of U.S. sanctions makes the U.S. the economic policeman of the planet, and that is not acceptable,” said French finance minister Bruno Le Maire in May.

Russian President Vladimir Putin was more pointed: “The whole world sees the dollar monopoly is unreliable; it is dangerous for many, not only for us,” he said. In response, “Our gold and foreign currency reserves undergo diversification and we will continue to do it.” In the two months since, Russia has unloaded 80% of its U.S. Treasury holdings, lest Washington end up freezing them.

And China? That’s Iran’s biggest oil customer. No way will it cut back.

If anything, Beijing will buy even more Iranian oil. The dollar? Not an issue: One of China’s three state-owned oil giants has a banking arm with little exposure to the global financial system. It can carry on transacting with Iran just fine, thank you.

The Chinese and the Russians are eager to get out from under the dollar’s thumb, perhaps implementing a system involving gold or blockchain technology or both — “a robust multilateral payments system that is free of hacking, tracking or interdiction by the U.S., and free of U.S. dollars,” as Jim Rickards said here two months ago.

Over time, if it’s robust enough, the Europeans might jump ship. And what of the dollar then?

Brace for economic fallout from this Iran vendetta. It doesn’t make splashy headlines like trade wars… But we daresay it will have a bigger long-term impact.

In the meantime, the president’s tweet hasn’t rattled markets much.

At last check none of the major U.S. stock indexes has budged more than a few hundredths of a percentage point. The Dow is still holding the line on 25,000 and the S&P on 2,800.

The lone economic number of note is existing home sales. The June number rings in less than expected, a 0.6% decline from May. For the moment, however, prices remain elevated — the national median at $276,900.

Brace yourself if you’re a California taxpayer. And if you live elsewhere, you shouldn’t feel cocky, either.

It turns out the two biggest pension plans for government employees in the country — both in California — have earned more than 8% for a second straight fiscal year. But even the plans’ managers don’t expect that to last: As we mentioned in 2016, the California Public Employees’ Retirement System, or CalPERS, has dropped its expectations to 7%. And the plan for California teachers is dialing back to 7% by 2021.

That’s a significant change from a phenomenon we identified in 2010 as “the 8% illusion.” Pension managers figured because average annual returns over the previous 25 years were 8%, they’d be the same for the next 25 years.

But as we said in February, it’s not enough. The 7% estimate is the result of accounting games. CalPERS’ real expectation for the next 10 years is only 6.1%.

Why the number-fudging? “Even slight cutbacks in return targets often mean budget-strained governments or workers are asked to pay significantly more to account for liabilities that are expected to rise as life spans increase and more Americans retire,” says The Wall Street Journal.

A British woman named Lindsay Durdle died from breast cancer in May. She was 37. A few weeks later, PayPal sent her a nastygram informing her she’d defaulted on her PayPal Credit loan — outstanding balance £3,240.72, or more than $4,200.

It’s right there in the letter: “You are in breach of condition 15.4(c) of your agreement with PayPal Credit as we have received notice that you are deceased.” And as if to underscore the obvious: “This breach is not capable of remedy.”

“I’ve got quite a level head on my shoulders, and am quite capable of dealing with paperwork like this,” says Ms. Durdle’s widower, Howard, who opened the letter. “But I’m a member of the charity Widowed and Young, and I’ve seen firsthand in there how a letter like this or something like it can completely derail somebody.”

PayPal has apologized to Howard Durdle. But it won’t say how such a preposterous fubar occurred in the first place.

After we tackled the bullish implications of the buyback binge last week, we heard from a Platinum Reserve member who lives in South America…

“First, when looked at historically, don’t companies tend to buy back the most shares just before the market peaks?

“This doesn’t mean it will peak right away, as they can keep buying back shares for a while, but I think it’s a nearly worthless forward-looking indicator. I much prefer it when company executives are buying shares with their own money.

“Second, you referred to several potential catalysts for the Fed backing off its tightening policy and said, ‘None of those are on the horizon.’

“I would suggest that the horizon is the wrong place to be looking. Keep an eye closer in front of the ship. There are a variety of things that could cause sudden course changes and even panic on the bridge.

The 5: Absolutely, buyback binges are a classic sign of the late boom stage of the boom-bust cycle. Ditto for mergers and acquisitions, which are also going bonkers.

Our point is that the corporate tax cuts are providing extra fuel that could keep the party going on longer than it would otherwise.

As for the Fed, all we’re saying is that the Fed is bound and determined to keep jacking up the fed funds rate so the Fed can lower the rate again to combat the next recession. All along during this rate-raising cycle that began in December 2015, the question has been whether the Fed would run out of time before the next recession hit.

There’s a lot of “consensus” building right now about a recession in late 2019 or 2020. Conveniently, by that time the fed funds rate would be north of 3%, and lowering the rate would have some meaningful “stimulus” effect.

Any sooner and the Fed will lack some of those proverbial “bullets in the chamber.”

“I just read your write-up on the Theresa Tetley case,” says one. “Instead of attributing federal conspiracy, you should probably review the specifics of the case. Bitcoin exchanges that operate in the U.S. are subject to anti-money laundering (AML) laws.
“I agree that the U.S. government and banking institutions wish bitcoin didn’t exist, but this isn’t an example of illegal prosecution or harassment. Work a little harder next time.”

The 5: No, it’s totally legal. That’s the problem from where we sit.

The KYC/AML (know your customer/anti-money laundering) laws are out of control. They’re part and parcel of the war on cash. They’re the reason we got a note from a reader in Texas last month: For years, his sister out of state has owned a rental property near his home. He collected the rent in cash and deposited it in his sister’s account, using her deposit slips. But Wells Fargo put an end to that on June 1. “Now they will not accept a cash deposit into any personal account other than your own.”

Besides, if Ms. Tetley was violating the AML laws, why didn’t the DEA track down an existing noncompliant transaction instead of using an undercover agent to lure her into one that wouldn’t exist except for the agent’s actions?

“I’m just wondering if Jaequan Faulkner will be liable for paying sales tax as a result of having a permit to sell hot dogs?” writes another.

“It’s quite possible that government bureaucrats will use this ploy — as a means to create tax indebtedness for budding young entrepreneurs.

“If that becomes the case, l would be careful about entertaining notions of future overseas expansion. Some State Department functionary may decide to deny giving a passport based on not complying with a business tax obligation.

“What’s your take on this matter?”

The 5: Our take is that you have an overactive imagination. Don’t give them any ideas!

P.S. Weekly Wealth Alert is on a roll. So far this year, 29 out of 40 trades are winners… and among the winners, the average gain is 67%.

We’ve been saying for months that Weekly Wealth Alert could be the most powerful “upgrade” you make to your account with us all year. Click here and see the powerful evidence why.